Patients and methods: In this retrospective study conducted between April 2005 and December 2008, 36 shoulders in 19 patients (2 males, 17 females; mean age: 58.9 years; range 42 to 75 years) were evaluated at baseline and two years after the initiation of bDMARD therapy with infliximab (n=14) or etanercept (n=5). Standard anteroposterior radiographs of the shoulder joints were taken at baseline and two years after institution of biological therapy. Structural damage in the shoulder joints was assessed using the Larsen scoring method, the medial displacement index (MDI), and the upward migration index (UMI).

Conclusion: Medial displacement index and UMI correlated with the Larsen grade of the shoulder joint strongly and moderately, respectively. This study suggests that MDI and UMI may help to evaluate radiographic progression of damage in shoulder joints in patients on bDMARDs, which is difficult to detect using the Larsen grade.

Shoulder joint involvement is often observed in patients with rheumatoid arthritis (RA), and the majority of patients suffer from varying degrees of shoulder symptoms.[1] In the shoulder joint, the synovial inflammation primarily targets the glenohumeral joint and leads to bony erosions and pain. Such structural damage is common in the shoulder and only a small portion of patients with RA has normal shoulder radiographs throughout the course of their disease.[2] In affected shoulders with bone and cartilage damage, the subacromial bursa is also involved and the rotator cuff may become trapped between the subacromial bursa and glenohumeral joint is gradually impaired. Range of motion decreases due to pain and structural damage to cartilage, bone and the rotator cuff, causing further functional disability of the shoulder. In the upper extremities, the shoulder joints play a central role in the physical function of RA,[3] and, thus, detailed evaluation of the shoulder during medical treatment is indispensable.

Recently, biological agents have shown a major impact on the treatment of RA in controlling disease activity, inhibiting joint destruction, and improving functional status.[4] Specifically, tumor necrosis factor (TNF)-blocking therapies with biological disease-modifying antirheumatic drugs (bDMARDs) have been shown to inhibit the progression of damage to the small joints in the hands and feet.[5] Destruction in large joints of the lower extremity, such as hip and knee, is also suppressed by bDMARDs.[6,7] However, their effects in the glenohumeral joint remain to be clarified. Hirooka et al.[8] reported that they devised two radiographic parameters: a medial displacement index (MDI) and an upward migration index (UMI) of the humeral head. They studied the natural course and the possibility of making prognoses about shoulder joint destructions in RA patients using these parameters.

This study is a retrospective review of consecutive shoulders that received bDMARD therapy between April 2005 and December 2008 in the Faculty of Medicine, University of Toyama. A total of 19 patients (2 males, 17 females; mean age: 58.9 years; 42 to 75 years) were enrolled in this study. All patients fulfilled the American College of Rheumatology 1987 revised criteria for a diagnosis of RA.[9] bDMARD therapy was in accordance with the Japan College of Rheumatology Guidelines.[10,11] Inclusion criteria were active RA with ≥6 swollen joints, ≥6 tender joints, C-reactive protein (CRP) of ≥2.0 mg/dL, and an erythrocyte sedimentation rate (ESR) of ≥28 mm/h. All patients had had an inadequate response to one or more recommended levels of conventional DMARDs. Patients were also required to have white blood cell counts of ≥4,000/mm3 and peripheral blood lymphocyte counts of ≥1,000/mm3. In addition, patients were required to be serum negative for interferon-gamma release assay and b-D-glucan to avoid possible opportunistic infections, including tuberculosis and Pneumocystis jirovecii pneumonia. Patients were treated with methotrexate (MTX) and a standard dose of infliximab of 3 mg/kg intravenously at zero, two, and six weeks, and every eight weeks thereafter, or with etanercept at a dose of 25 mg once or twice weekly by subcutaneous injection. The study protocol was approved by the Faculty of Medicine, University of Toyama Ethics Committee (Approval No: 19-11). A written informed consent was obtained from each patient. The study was conducted in accordance with the principles of the Declaration of Helsinki.

Routine laboratory tests, including ESR, CRP, and matrix metalloproteinase-3 (MMP-3), were performed for each patient at baseline and at regular intervals thereafter. As a parameter of disease activity, the Disease Activity Score in 28 joints (DAS28-CRP)[12,13] was used. Clinical response at one year was defined according to the European League Against Rheumatism (EULAR) response criteria based on the DAS28.14 Body mass index that may influence joint damage[15,16] was also measured at baseline. 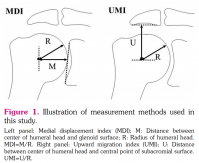 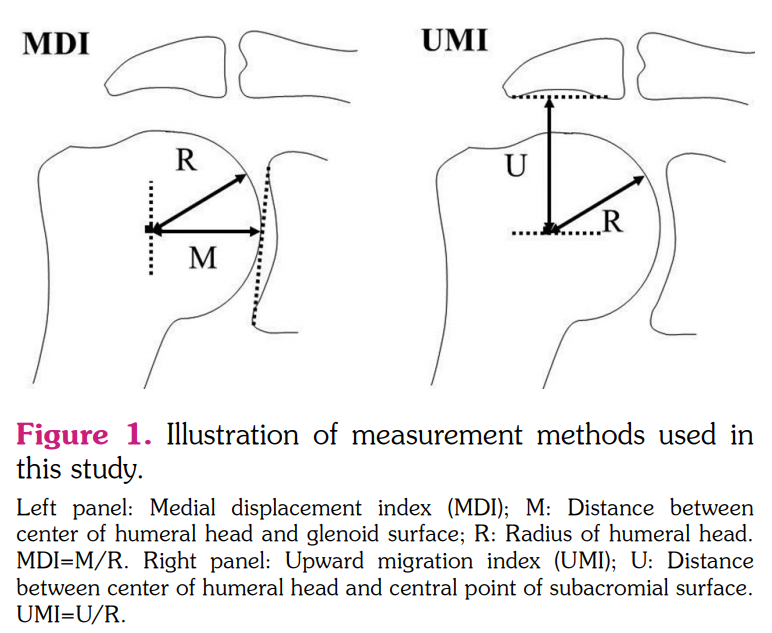 Table 1 shows the baseline characteristics of patients. Most patients (89.5%) received MTX before bDMARD therapy either as monotherapy or in combination with different conventional DMARDs. A total of 15 patients (78.9%) received corticosteroids, with a mean dose of 3.33 (interquartile range, 2-7) mg/day. Patients had moderate (n=16) or high (n=3) disease activity. Infliximab (n=14) and etanercept (n=5) were administered to patients (including cases that switched from infliximab). A total of 36 glenohumeral joints, excluding joints with preceding surgery, were analyzed for their baseline Larsen grades as follows: Grade 0, 13 joints (36.1%); Grade I, 12 joints (33.3%); Grade II, three joints (8.3%); Grade III, five joints (13.9%); Grade IV, one joint (2.8%); and Grade V, two joints (5.6%).

Table 1. Baseline characteristics of the patients
×

Table 2. Radiographic assessment according to Larsen grade, MDI and UMI at baseline
× 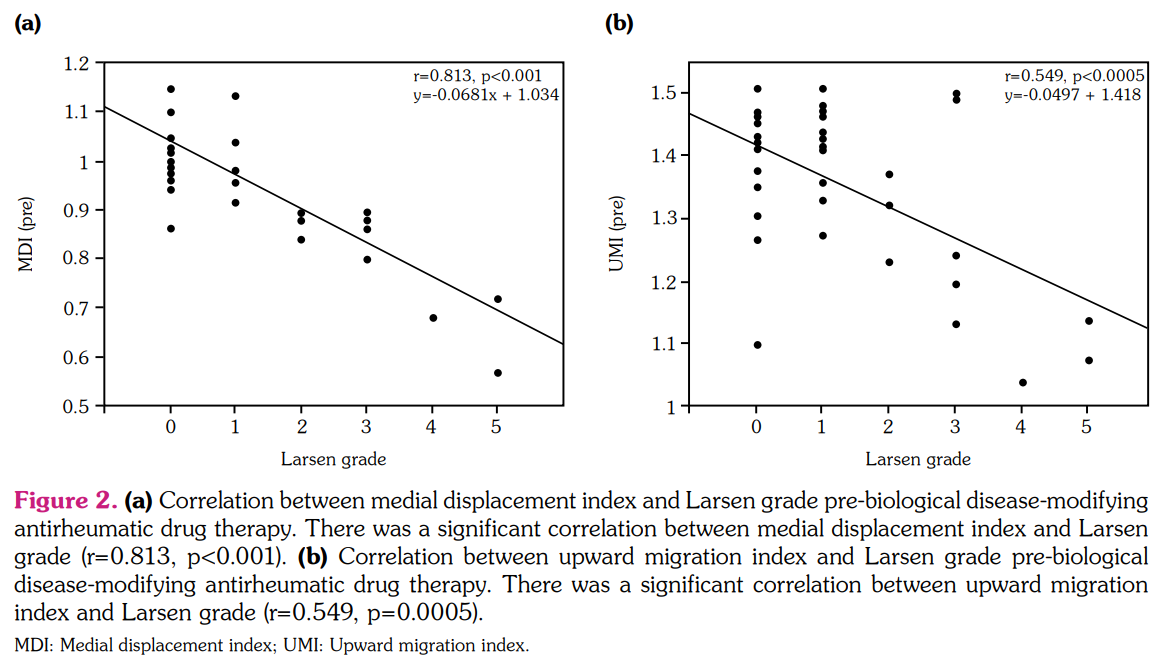 We performed logistic regression analysis to reveal the factors associated with the progression of joint space narrowing, which was given signs of MDI and UMI.

Table 3. Logistic analysis of factors associated with deterioration of MDI
×

Table 4. Logistic analysis of factors associated with deterioration of UMI
×

A report from the Acute Venous Thrombosis: Thrombus Removal With Adjunctive CatheterDirected Thrombolysis (ATTRACT) study showed that increases of modified total Sharp scores were inhibited by infliximab administration in comparison with MTX alone. Approximately 50% of patients receiving infliximab showed radiological improvement.[5] Previously, Seki et al.[6] reported that bDMARD therapy could inhibit the progression of weight-bearing joint damage as well as in small joints. However, hip and knee joints with Larsen Grade III or IV damage at baseline showed progression even in patients with a good response to the bDMARD treatment. In the previous work of Matsushita et al.,[7] it was also demonstrated that independent factors associated with progression of damage in the hip and knee were baseline Larsen grade and disease activity at one year after bDMARD therapy. There have been few reports regarding the effects of bDMARD therapy on shoulder joints. In the present study, we observed a similar therapeutic effect on the shoulder joints of RA patients receiving bDMARDs. There were few damaged joints of baseline Larsen Grades 0-II and there was a low rate of progression of Larsen grade after bDMARD therapy was initiated. Therefore, shoulder joints responded similarly to weight-bearing joints after bDMARD therapy. Thus, it is expected that the progression of shoulder joint destruction can be controlled when damage of the joint is scored as Larsen Graderade 0-II.

Although the most widely used evaluation of the large joints of RA is the Larsen grade, it is not specifically designed for rheumatoid shoulder lesions, and it is often difficult to differentiate among Larsen Grades III-V. Several reports have described the use of the acromiohumeral interval and glenohumeral joint space as an index of deviations of the humeral head.[20-22] However, shoulders are difficult to assess, particularly when severe destruction is present and they can be easily affected by the photographic method such as radiographic amplification and gaps in the photographic direction. Therefore, we also used two indices, MDI and UMI, reported by Hirooka et al.,[8] to evaluate the shoulder joints of RA patients. Similar to Hirooka et al.’s[8] report, our results suggested that MDI and UMI were useful parameters for quantitatively assessing the radiographic progression of shoulder joints in RA patients receiving bDMARD therapy.

Univariate analysis demonstrated that stage, Larsen grade, and ESR at baseline were higher in patients with MDI deterioration pre-treatment. Moreover, ESR at baseline was correlated with the deterioration of MDI at multivariate analysis. CRP at one year of treatment and MMP-3 at baseline were higher in the patients with pre-treatment UMI deterioration. On the other hand, MMP-3 might have statistical significance in UMI at preand post-bDMARD therapy. MMP-3 is known to be a major cartilage-degrading enzyme, which is produced by synovial lining cells and chondrocytes themselves.[23,24] It is reported that levels of MMP-1 and MMP-3 in knee synovial fluid were significantly higher in RA than in osteroarthrits.[25] Yoshihara et al.[26] reported that levels of MMP-1, MMP-3, tissue inhibitor of metalloproteinase-1, and glycosaminoglycan in synovial fluid from patients with full-thickness tears of the rotator cuff appeared to be higher than those with partialthickness tears. Therefore, MMP-3 might be a significant factor influencing UMI deterioration that might be affected by a rotator cuff tear. In the previous work of Matsushita et al.,[7] it was reported that the progression of damage in hip and knee joints was influenced by baseline Larsen grade. On the other hand, baseline Larsen grade was not affected by the deterioration of MDI and UMI in multivariate analysis of non-weight-bearing joints. We speculate that the shoulder joint is less susceptible to mechanical stress.

Lehtinen et al.[27] reported that upper migration of the humeral head slightly precedes medial migration. In addition, the upward migration of the humeral head might rapidly progress when it is accompanied by a rotator cuff tear due to inflammation, even in the presence of minimal joint destruction.[28] Weiner and Macnab[20] examined 59 shoulders with surgically detected rotator cuff tears and found that half of these patients had a subacromial space <6 mm, compared with no values <7 mm in 60 normal shoulders. In this study, we observed subacromial space narrowing (<7 mm) in seven shoulders. Moreover, there were only two shoulders with 6 mm of subacromial space in joints of Larsen Grade 0-II. We should consider the presence of a rotator cuff tear if progression of UMI is observed without good clinical response as assessed by the EULAR criteria. According to our univariate analysis, DAS28-ESR at baseline and one year of treatment was not significantly different between deterioration and no deterioration of MDI and UMI.

The present study has several limitations. First, the current results were obtained from a small number of patients treated with two types of bDMARDs at a single center. Moreover, a small number of joints with deterioration may decrease the reliability of the results of the multivariate analysis. Second, we did not analyze radiographic changes of shoulder joints in patients without bDMARD therapy. Nevertheless, the data from this study should be useful for understanding the effects and limits of bDMARD therapy on shoulder joints with different degrees of baseline radiographic damage. In the future, the relationship of the change of MDI and UMI and the deterioration of shoulder destruction should be revealed and the difference of MDI and UMI according to shoulder destruction pattern.

In conclusion, both MDI and UMI were strongly and moderately correlated with Larsen grade of the shoulder joint, respectively. Our results showed that the parameters of MDI and UMI can be easily used to detect minor radiographic changes, which are hard to detect using the Larsen grade. Multivariate logistic regression revealed that ESR at baseline was independently associated with the progression of MDI. Multivariate logistic regression revealed that MMP-3 at baseline and CRP at one year of treatment were independently associated with the progression of UMI.