Objectives: The aim of this study was to investigate the frequency of mitral valve prolapse between healthy females with generalized joint hypermobility and healthy controls.

Results: No significant difference was found in the age, height, body weight, and body mass index between the groups (p>0.05). The median Beighton score was 5 in the generalized joint hypermobility group and 2 in the control group. No mitral valve prolapse was detected in those with generalized joint hypermobility, while non-classical mitral valve prolapse was observed in one participant in the control group, indicating no statistically significant difference between the two groups (p>0.05).

Generalized joint hypermobility is quite common in the general population, particularly in children and young females.[4,5] The prevalence of GJH in individuals with an age range of 17 to 26 years has been reported to be 42 to 51% in women and 22 to 27% in men.[5,6] It is often congenital and possibly an inherited condition.[3]

Although most of patients with GJH are asymptomatic, GJH can be associated with various musculoskeletal problems.[4] In the study of Tuna,5 51% of young female individuals with GJH were reported to be asymptomatic. On the other hand, individuals with GJH accompanied by musculoskeletal complaints such as arthralgia, back pain, and soft tissue problems are diagnosed with benign joint hypermobility syndrome (BJHS) based on the Brighton criteria.[7]

Mitral valve prolapse (MVP) is a heart valve disease characterized by the bulging of one or both mitral valves into the left atrium and affects between 2 and 3% of the general population.[8] It is a disease of the young and is more common in women than men.8 In addition, MVP can cause severe mitral insufficiency, bacterial endocarditis, congestive heart failure, and even sudden cardiac death.[9]

To date, case-control studies and meta-analyses have almost entirely been conducted in patients with MVP and symptomatic joint hypermobility such as BJHS,[10-18] or connective tissue diseases such as EDS, Marfan syndrome.[19,20] The MVP has been reported to be common among patients with joint hypermobility syndrome.[10-12,21] Furthermore, the dilemma of MVP-associated GJH continued as a “casual coincidence, common link, or fundamental genetic disturbance”.[22] Recently, Tuna et al.[23] reported that healthy women with GJH had different gene expressions (higher SLC39A13 and TNXB, and lower DSE, FKBP14, COL1A1, COL1A2, and COL5A1) than the non-hypermobile controls. In addition, GJH is a common feature in EDS types in which disorders of collagen primary structure and collagen processing have been already known. Considering the possibility that currently healthy females with GJH differ from nonhypermobile females, in the present study, we aimed to investigate the frequency of MVP between healthy females with GJH and healthy controls.

Table 1. The Beighton score and the Brighton criteria[2,7]
× 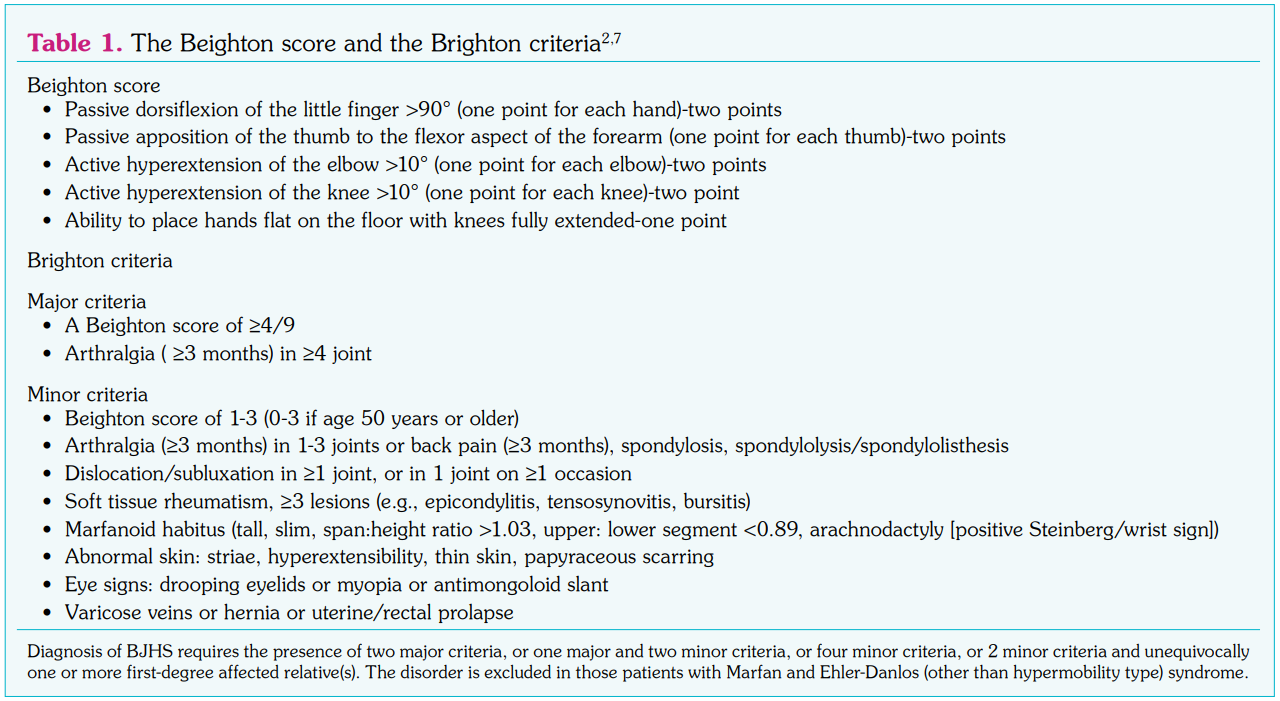 Statistical analysis was performed using the IBM SPSS version 20.0 software (IBM Corp., Armonk, NY, USA). Descriptive data were expressed in mean ± standard deviation (SD), median (min-max) or number and frequency. A single-sample Kolmogorov-Smirnov test was used to analyze whether the data were normally distributed. The Student t-test and the Chi-square test were used to examine the differences in the demographic characteristics and the frequency of MVP between the control and GJH groups, respectively. A p value of <0.05 was considered statistically significant.

Table 2. Demographic and echocardiographic findings of the GJH group and the control group
× 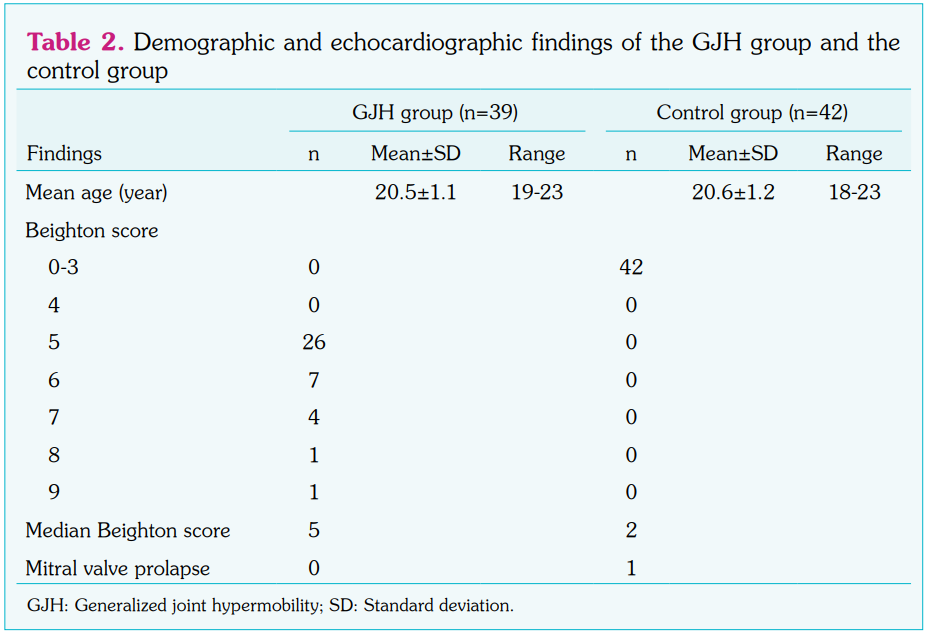 The median Beighton score was 5 (range, 5 to 9) in the GJH group and 2 range, 0 to 3) in the control group (Table 2). According to the echocardiographic examination, no MVP was detected in the GJH group, whereas non-classical MVP was observed in one participant in the control group, indicating no statistically significant difference between the two groups (p>0.05). The participant with MVP had a Beighton score of 2 and had a 3-mm prolapse in the anterior mitral leaflet with 4-mm thickness of the leaflet. In this patient, no mitral insufficiency was detected and the left atrial dimension, left ventricular end-diastolic and endsystolic diameters, and ejection fraction were found to be normal.

In the present study, we investigated whether the frequency of MVP differed between healthy females with GJH and healthy controls. The study results showed that there was no significant relationship between MVP and GJH among the currently healthy females. In addition, none of the participants with GJH had echocardiographic findings consistent with MVP.

Although nearly half of individuals with GJH are asymptomatic and the other half is symptomatic, an individual with GJH should be questioned in terms of the presence of symptoms to achieve methodological precision.[5] Due to the research gap regarding the correlation between MVP and asymptomatic individuals with GJH, which is the focus of the current study, we discuss the results of previous studies on MVP in joint hypermobility syndrome or joint hypermobility syndrome in MVP, already known in the current literature.

Nonetheless, there are some limitations to this study. Relatively small sample size and the inclusion of only female participants are the main limitations. Therefore, the results cannot be generalized to the entire population and further large-scale, prospective studies are needed to confirm these findings.

In conclusion, our study results suggest that the frequency of MVP is comparable between the women with GJH and healthy controls. This finding again highlights the difference between joint hypermobility syndrome and healthy individuals with GJH. In the presence of highly prevalent GJH in the society, assessment of the presence of MVP may cause anxiety. We also consider that the routine echocardiographic evaluation in healthy individuals with GJH may cause unnecessary financial burden on the healthcare system.