Objectives: This study aims to evaluate the frequency and absolute number of circulating innate lymphoid cell (ILC) subsets and their associations with clinical and serological features in systemic lupus erythematosus (SLE).

Conclusion: Our results indicated biased altered distributions of circulating ILC subsets in SLE. ILC3s were associated with SLE disease activity, and ILC1s, ILC3s, and ILC1/ILC3 and ILC2/ILC3 ratios were associated with SLE accompanied with arthritis. Taken together, these results suggest that ILCs may serve as cellular biomarkers for disease activity and arthritis involvement in SLE.

Systemic lupus erythematosus (SLE) is a heterogeneous autoimmune disease characterized by the overproduction of autoantibodies and type I interferon (IFN).[1] Previous studies have indicated that many immune cells, including B cells, T cells, natural killer (NK) cells, monocytes, and dendritic cells (DCs), participate in the pathogenesis of SLE, and abnormalities in these cells can occur at multiple points during the immune response, resulting in striking heterogeneity in clinical presentations.[2]

Innate lymphoid cells (ILCs) represent a new lymphocyte subfamily that is distinct from T cells and B cells due to the absence of rearranged antigen-specific receptors,[3] emerging as important effectors of innate immunity through their rapid production of proinflammatory and regulatory cytokines.[4] Mimicking helper T (Th) cells, ILCs are divided into three subgroups based on the transcription factors they express and the cytokines they produce: group 1 ILCs (which include NK cells and ILC1s), group 2 ILCs (ILC2s), and group 3 ILCs (which consist of lymphoid tissue inducer and ILC3s).[5] In addition, depending on the cytotoxic ability, ILCs are distributed into two groups as cytotoxic ILCs (NK cells) and non-cytotoxic or helper ILCs (also called CD127+ ILCs, which are composed of ILC1s, ILC2s, and ILC3s).[4]

Accumulating evidences have shown that ILCs play an important role in the innate immune response against pathogenic microorganisms, tissue homeostasis, and metabolic regulation[4] and in the development of chronic inflammatory and autoimmune diseases.[6] Wohlfahrt et al.[7] reported that the number of dermal and circulating ILC2s was increased in patients with systemic sclerosis and this increase was correlated with the extent of fibrosis. Rodríguez-Carrio et al.[8] found increased numbers of ILC1s and ILC3s in lymph nodes of patients with rheumatoid arthritis (RA) compared to healthy controls. Recently, one report indicated that kidney-resident ILC2s were suppressed by IFN-γ and that the progression of lupus nephritis was accompanied with a reduction of ILC2s in MRL/MpJ-Faslpr mouse model.[9] Cols et al.[10] identified an expanded population of ILCs with a more remarkable IFN-γ signature than T cells in both peripheral blood and gastrointestinal and lung tissues of patients with common variable immunodeficiency. Recently, two studies identified altered frequencies of circulating ILC1s, ILC2s, and ILC3s in patients with SLE compared to those in healthy controls.[11,12]

Thus, we hypothesize that an altered distribution of ILC subsets may play a role in the pathogenesis of human SLE based on the evidences about ILCs in autoimmune diseases and lupus animal models. In this study, we aimed to evaluate the frequency and absolute number of circulating ILC subsets and their associations with clinical and serological features in SLE.

In the present study, all enrolled patients (n=28) were Han Chinese with a mean age of 37.57 years, and 82.14% of the patients (23) were females. Patients with a mean SLEDAI-2000 score of 8.93 were enrolled. The mean disease duration was 55.68 months. The other clinical manifestations and serological features of the recruited patients are summarized in Table 1. 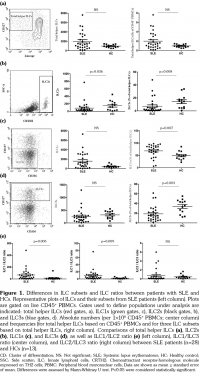 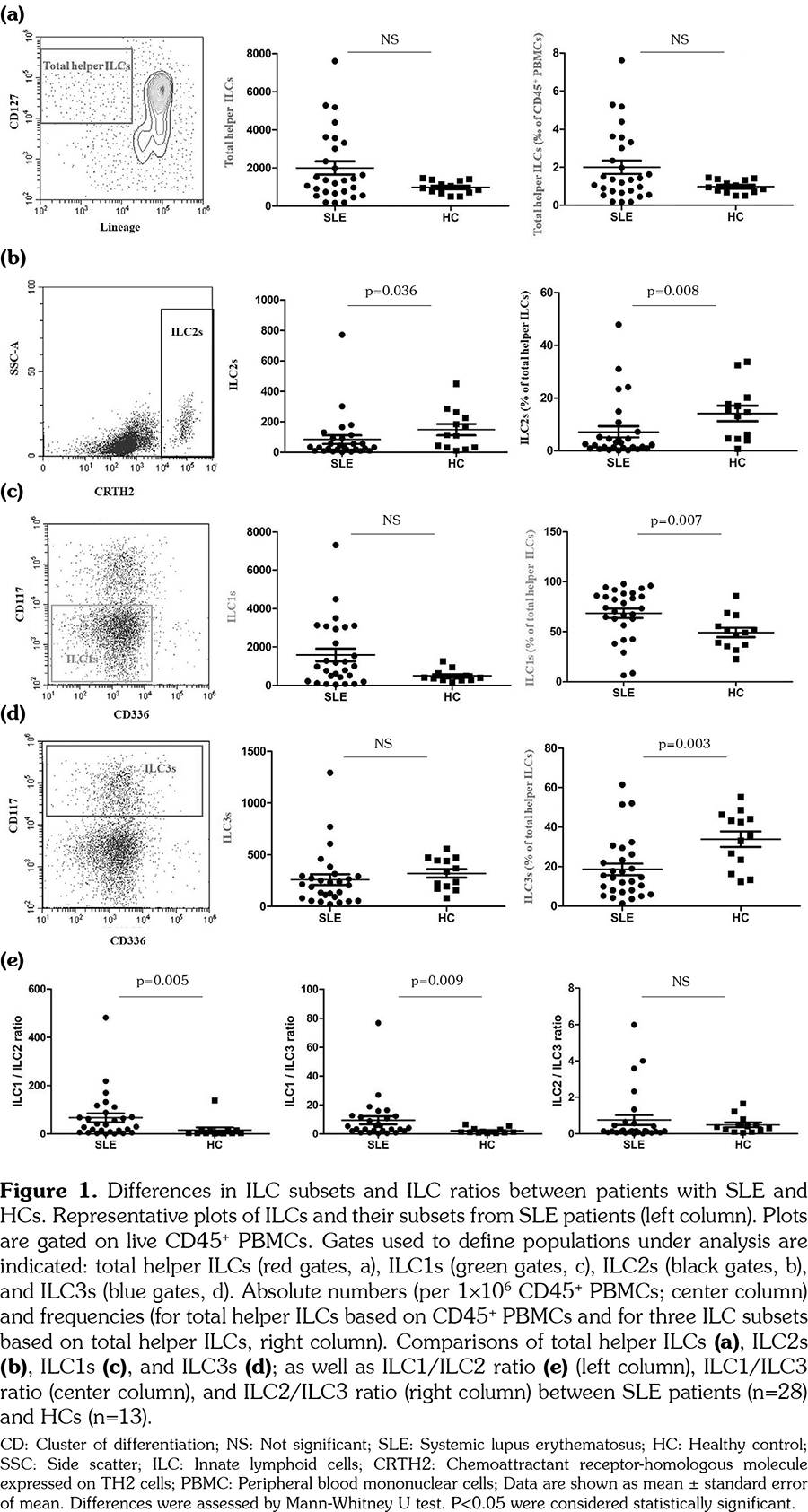 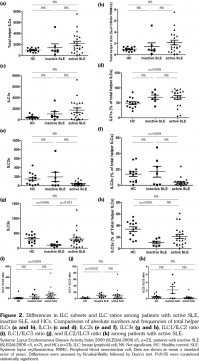 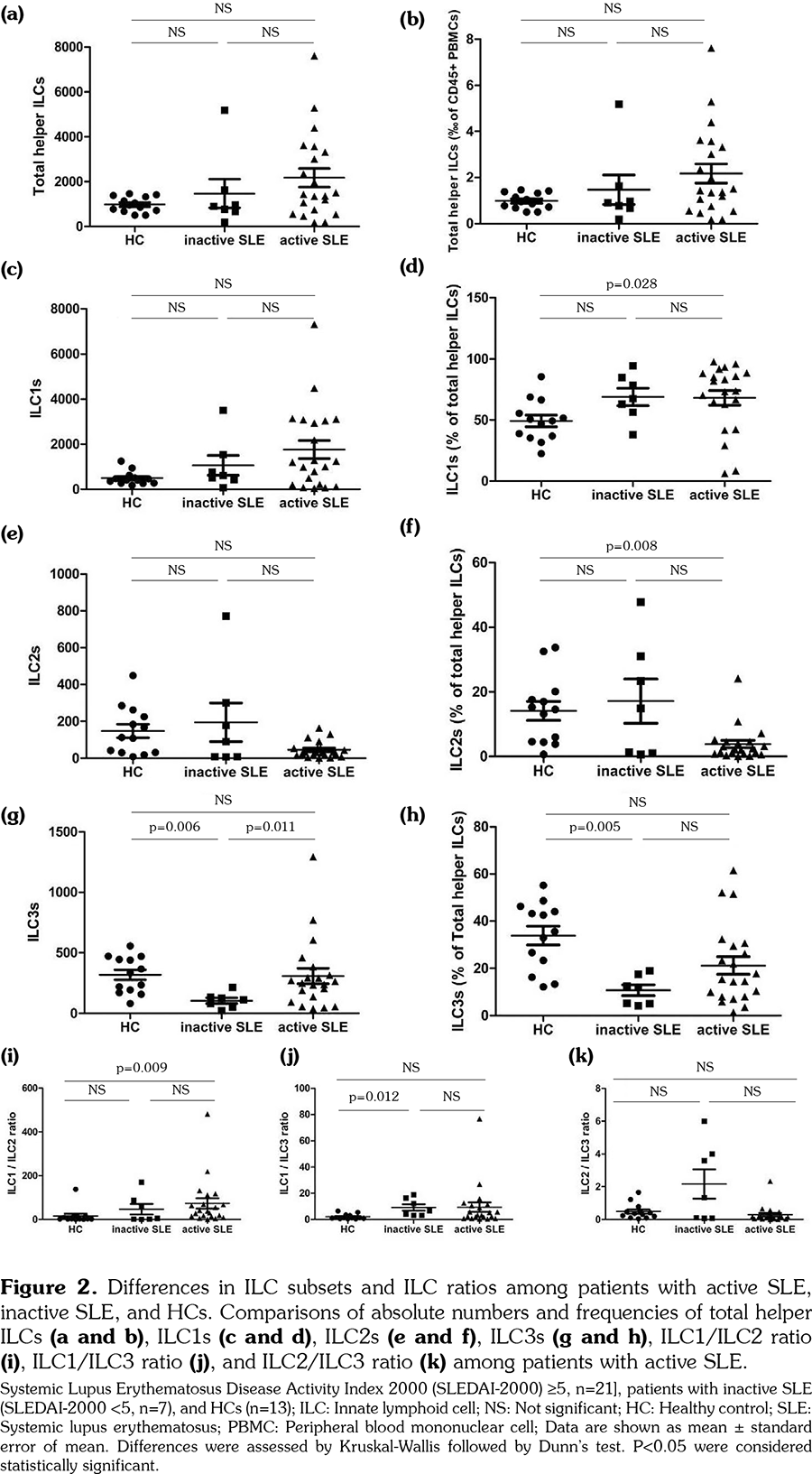 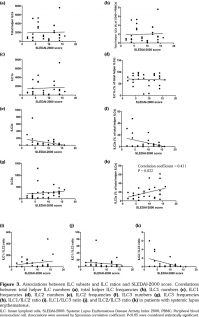 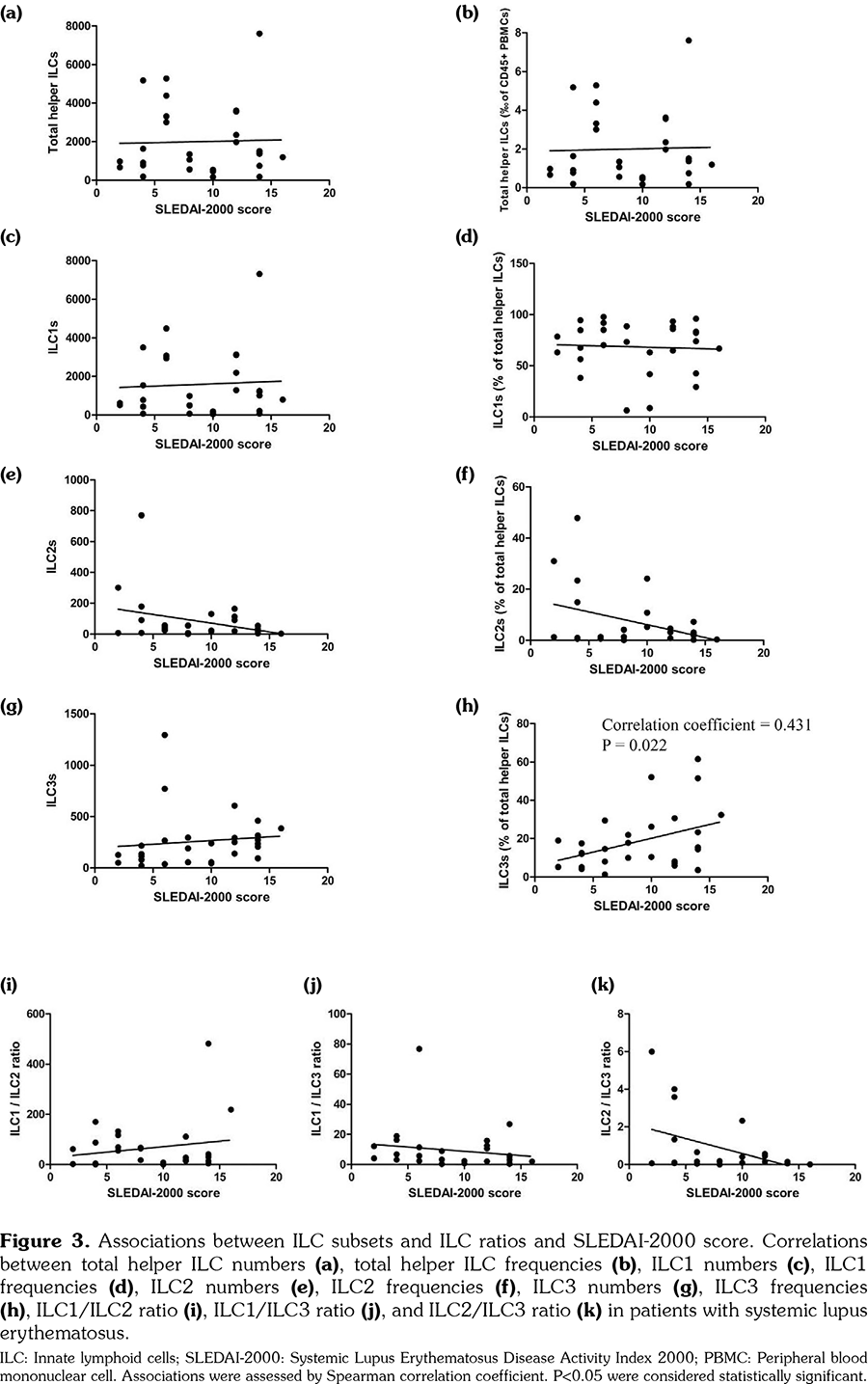 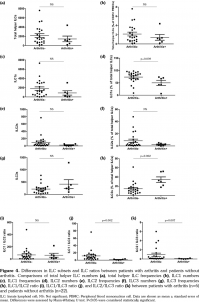 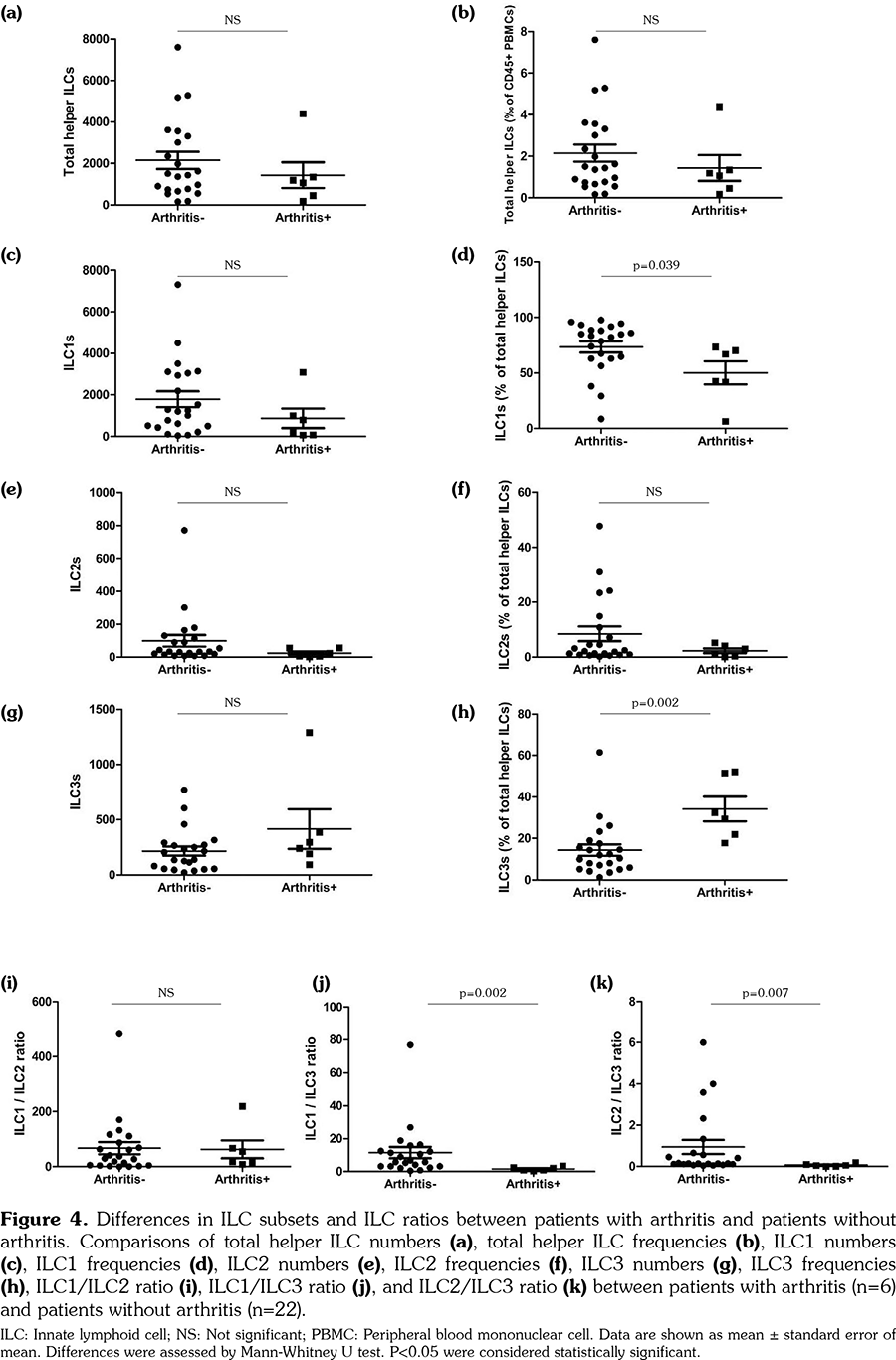 Finally, we analyzed the relationships between ILC subsets and the serological features in SLE (including ANA titer, anti-dsDNA titer, serum IgG/A/M level, serum C3/C4 level, ESR level, CRP level, and other autoantibodies). The results showed that the absolute numbers of ILC3s were positively correlated with serum anti-dsDNA titers (correlation coefficient=0.504, p=0.006) (Table 2). There were no correlations between other ILC subsets and serological features (data not shown).

In the present study, we identified biased ILC distributions in different SLE disease stages. In patients with active SLE, the ILC1/ILC2 ratio was higher than that in healthy controls; however, in patients with inactive SLE, the ILC1/ILC3 ratio was higher than that in healthy controls. Recent studies have identified that ILC2s and ILC3s could shift to T-bet+ IFN-γ -secreting ILC1s depending on IL-12 and IL-18; on the other hand, ILC1s could transdifferentiate back to either ILC2s in response to IL-4 or to ILC3s in response to IL-23 and IL-1β.[24] Moreover, it has been shown that serum IL-12 and IL-18 levels are elevated in SLE patients.[25] Maazi et al.[26] also indicated that plasmacytoid dendritic cells (pDCs) suppressed cytokine production and proliferation rates while increasing the rate of apoptosis of ILC2s through IFN-α production in allergic asthma murine models. It is well-known that pDCs are the main source of type I IFN and that the pDC-type I IFN axis plays an important role in the pathogenesis of SLE; moreover, increased pDCs and type I IFN cytokines were found in patients with SLE.[27] Another report revealed that the proliferation and cytokine production of kidney-resident ILC2s were suppressed by IFN-γ and IL-27 produced by activated T cells and myeloid cells in MRL-lpr mice.[9] However, patients with SLE possess different cytokine profiles depending on the disease activity.[28] Thus, it may be suggested that various cytokine pathways might contribute to the plasticity of the three ILC subsets in different SLE disease stages.

In our study, we found that the absolute numbers of ILC3s were elevated in patients with active SLE compared with that in patients with inactive SLE, and that ILC3s were positively correlated with SLEDAI-2000 and serum anti- dsDNA titers. This indicated that ILC3s were associated with disease activity and that it might be a cellular marker to monitor SLE disease flares; however, more prospective studies are needed to confirm this hypothesis.

Systemic lupus erythematosus is a systemic autoimmune disease that can affect almost all organ systems. Our results showed that increased frequencies of ILC3s, decreased frequencies of ILC1s, and decreased ILC1/ILC3 and ILC2/ILC3 ratios were found in patients with arthritis compared to those without arthritis. To our knowledge, to date, there is no research on ILC subsets in patients with SLE accompanied with arthritis. However, many studies on other autoimmune diseases accompanied with arthritis have been reported. Ciccia et al.[29] found that gut- derived ILC3s were expanded in the peripheral blood and synovial fluid in patients with ankylosing spondylitis. Rodríguez-Carrio et al.[8] found increased lymph node ILC1 and ILC3 counts in patients with RA compared to those in healthy controls. Soare et al.[30] showed that circulating ILC3 and ILC2 numbers were increased in patients with psoriatic arthritis and that the ILC2/ILC3 ratio was correlated with disease activity. In addition, one recent study indicated that granulocyte-macrophage colony-stimulating factor-producing ILCs induced by autoimmune Th17 cells could initiate and augment autoimmune arthritis in spontaneous autoimmune arthritis model.[31] Thus, we suggested that ILC subsets may contribute to the development of autoimmune arthritis and potentially serve as a cellular marker for the diagnosis and monitoring of SLE patients with arthritis. Although we failed to identify significant relationships between ILC subsets and other organ involvements, the link between them needs to be further assessed in the peripheral blood, kidney, skin, and synovial fluid.

A limitation of our study is the small sample size. Thus, larger cohorts will be needed to validate our findings.

In conclusion, the current study compared the distribution of ILC subsets in SLE patients with different clinical disease stages and organ involvements. We found that ILC3 frequencies were correlated with SLE disease activity. In addition, we identified that ILC1 frequencies, ILC3 frequencies, the ILC1/ILC3 ratio, and the ILC2/ILC3 ratio were associated with SLE accompanied with arthritis. Thus, ILC subsets may be cellular markers for SLE disease activity and specifically for SLE accompanied with arthritis.