Objectives: This study aims to evaluate the magnetic resonance imaging (MRI) findings of sacroiliac joints in a selected group of patients with systemic sclerosis (SSc).

Conclusion: Sacroiliitis was detected more frequently by MRI compared to conventional radiographic examination. MRI is suggested to be the preferred method for evaluating sacroiliitis in SSc patients.

Systemic sclerosis (SSc) is a rare autoimmune disease presenting mainly with skin and musculoskeletal symptoms as a result of excessive fibrosis and microangiopathy. Musculoskeletal involvement is one of the most frequent symptoms (24-97%) particularly in early stages of the disease.[1] Fatigue and muscle pain are also among the main reasons that reduce the quality of life in SSc patients. Widespread pain is also frequent.[2] Patients with SSc have many reasons and types of pain; therefore, they may not always be able to discriminate the inflammatory back pain from widespread pain. The latter may also be a concern of spondyloarthritis (SpA).[3] Contractures and deformities occur mostly in the joints and soft tissues of the hand, which are among the most important reasons of disability.[4] Joints in the feet, wrist, ankle, knee, and hip may also get involved.[5,6]

In a previous study, which was reported by our group, sacroiliitis was reported to be one of the most frequent joint involvements (23%) by conventional radiograms. However, it was suggested that more sophisticated methods such as magnetic resonance imaging (MRI) are required for this evaluation.[7] Therefore, in this study, we aimed to evaluate the MRI findings of sacroiliac joints in a selected group of patients with SSc.

Records of SSc patients admitted to the Department of Internal Medicine, Division of Rheumatology between January 2014 January 2015 were analyzed retrospectively. Of the 157 patients, 30 patients (2 males, 28 females; mean age 44.1±12.5 years; range, 24 to 70 years) who underwent MRI of sacroiliac joints were included in the study. The indications of MRI were musculoskeletal pain or high C-reactive protein (CRP). SSc patients were classified according to the American College of Rheumatology (ACR)/ European League Against Rheumatism (EULAR) 2013 criteria.[8] They were grouped according to the LeRoy criteria as diffuse or limited disease.[9] The clinical data were collected from patient records. T1 and T2 weighted magnetic resonance images of sacroiliac joints were evaluated according to the Assessment of SpondyloArthritis International Society (ASAS)/ Outcome Measures in Rheumatology MRI group criteria (Figures 1 and 2).[10] The ASAS scoring method was applied to conventional radiograms. Presence of inflammatory back pain was assessed as defined by ASAS.[11] Human leukocyte antigen B27 (HLA-B27) test results (if present) and CRP (mg/L) levels were extracted from patient records. The study protocol was approved by the Çukurova University, Faculty of Medicine, Balcalı Hospital Ethics Committee. A written informed consent was obtained from each patient. The study was conducted in accordance with the principles of the Declaration of Helsinki. 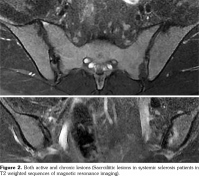 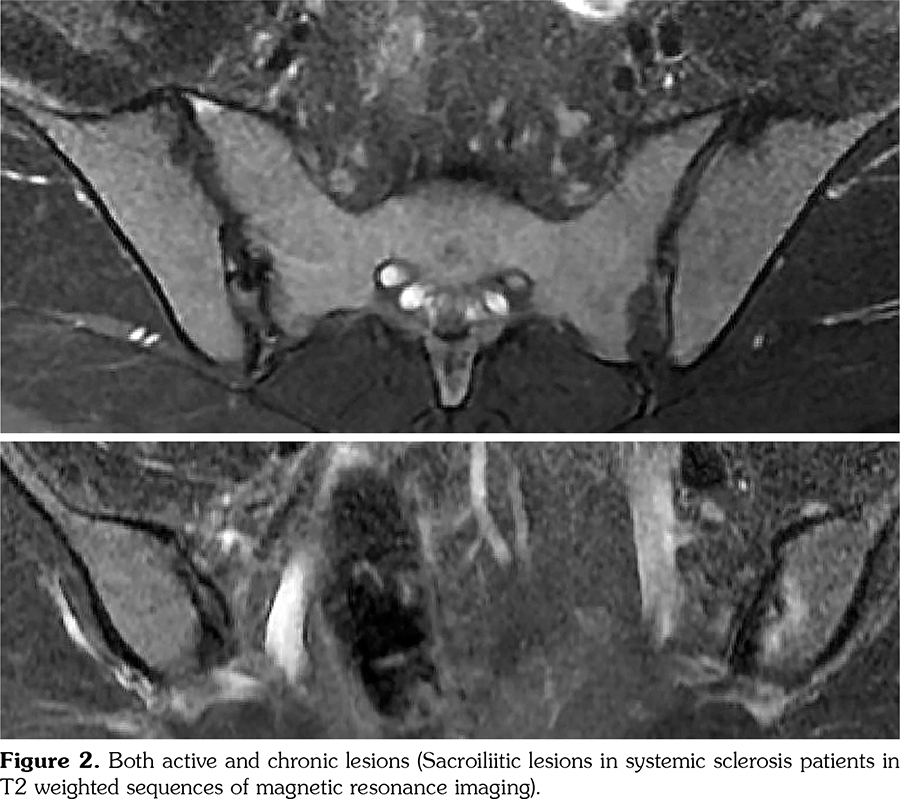 Statistical analysis was performed using the PASW version 18.0 program (SPSS Inc., Chicago, IL, USA). Categorical variables were summarized as number and percentage, while continuous variables were summarized as mean ± standard deviation and median (min-max). Chi-square test was used for comparing the categorical variables between the groups. P values <0.05 were considered as statistically significant for all tests.

Clinical features of the patients are shown in Table 1. Thirty patients (43%) were taking low-dose steroids (<7.5 mg/day prednisolone), while none of the patients was taking high-dose steroids. Twenty-two patients (73%) were on hydroxychloroquine, 12 patients (40%) colchicine, 17 patients (56%) calcium channel blockers, 11 patients (36%) angiotensin converting enzyme inhibitor/angiotensin-receptor blocker, six patients (50%) methotrexate, four patients (13%) cyclophosphamide, three patients (10%) mycophenolate mofetil, and five patients (16%) azathioprine. The time period between CRP test and MRI was 11.9±5.7 days. Sacroiliitis was detected by MRI in 11 SSc patients (37%). Five patients had chronic sacroiliitis, three had active sacroiliitis, and three had both active and chronic forms. For further evaluation, patients were divided into four groups as group 1 (consisting of all patients n=30), group 2 (non-sacroiliitis group, n=19), group 3 (active sacroiliitis group, n=6, three patients with active and three patients with both active and chronic lesions), and group 4 (chronic sacroiliitis group, n=5, patients with only chronic lesions). Radiographic findings, inflammatory back pain, HLA-B27, and CRP results are shown in Table 2. The clinical features of SSc patients with sacroiliitis on MRI are listed in Table 3. Six patients had diagnostic sacroiliitis on conventional radiograms (20%). Five patients (17%), whose conventional radiograms were non-diagnostic, had sacroiliitis detected on MRI. The number of patients with inflammatory back pain in group 3 was five in six patients (83%), whereas it was one in 19 patients in group 2 (5%) (p<0.05). CRP levels were significantly higher in group 3 compared to group 2 (p<0.05). No other clinical or laboratory parameters were found to be statistically significant between the study groups. When considering all data, seven patients were eligible for being classified as SpA according to ASAS criteria as shown in Table 2. No additional clinical features related to SpA were reported in these seven patients such as uveitis, psoriasis or inflammatory bowel disease.

Table 3. Characteristics of 11 patients with sacroiliitis on magnetic resonance imaging
×

Musculoskeletal pain is one of the most disabling complaints for SSc patients. Hands and feet were frequently reported for joint involvement.[12] As shown before, sacroiliac joints should be considered when evaluating musculoskeletal involvement. According to our knowledge, the first report about sacroiliitis in SSc was conducted in 1847 and cited by Benedek and Rodnan in 1982.[13] Several case reports were found in the review of the literature.[14-18] Also, it was reported that sacroiliitis may be present in connective tissue diseases such as Sjögren syndrome, mixed connective tissue disease, and systemic lupus erythematosus.[19-21]

In the present study, MRI evaluation is suggested to be superior to conventional radiograms (37% versus 20%). As a general rule, the presence of findings suggesting sacroiliitis on MRI does not show the absolute presence of SpA; sometimes such findings may also be nonspecific.

Sacroiliitis may be a component of joint involvement of SSc or it may be a feature of co-existing SpA. As we know that no underlying physiopathologic link is present between SSc and SpA, the chance of co-existence is relatively low. Kayser et al.[17] have reported that distinct genes may play roles for susceptibility to two different HLA-associated diseases. These two diseases may co-exist, particularly in patients carrying one or two susceptibility alleles to both diseases.[18] Further genetic studies may help to clarify the underlying mechanism of this co-existence.

The limitations of this study are its retrospective design, absence of some data such as HLA-B27, and the relatively small sample size although SSc is a rare disease.

In conclusion, when evaluating sacroiliac joints of SSc patients, MRI is recommended to be the preferred method particularly for patients with high CRP and/or musculoskeletal pain. Further prospective studies should be designed to evaluate the clinical and laboratory correlations of sacroiliac involvement in larger SSc patient groups.