Brain atrophy, typically slowly progressive, is a hallmark of neuropsychiatric (NP) systemic lupus erythematosus (SLE). In this article, we report a case of a young female patient with previously diagnosed SLE, without known NPSLE, with abrupt neurological deterioration and rapidly progressive diffuse atrophy in a few months. A comprehensive diagnostic work-up and follow-up magnetic resonance imaging (MRI), including high-resolution advanced vessel-wall sequences, revealed underlying cerebral vasculitis. The novelty factors that the present report brings are the rapid progressive atrophy demonstrated on follow-up MRI in a patient with SLE, and the depiction of an underlying vasculitis on specific vessel-wall MRI techniques. We also reviewed the literature and discussed the main current applications of vessel-wall MRI sequences. The aim of the report is to recognize this dramatic form of presentation of NPSLE and the utility of the new MRI techniques for the diagnosis.

In this article, we report the case of a young female patient previously diagnosed as SLE, who presented with important cognitive decline. A comprehensive diagnostic work-up and follow- up, including high-resolution specific vessel-wall imaging, established the diagnosis of cerebral vasculitis. MRI exams showed abrupt progression from normal brain to extremely severe atrophy in a few months. Rapid progressive cerebral atrophy was already recognized in NPSLE,[3] the novelty of this report being the underlying vasculitis demonstrated on vessel-wall MRI sequences as an underlying mechanism. Our purpose is to describe this form of onset of NPSLE and to make known the usefulness of the new MRI techniques in order to achieve the correct diagnosis.

Initial brain MRI, using a standard protocol, was normal (Figures 1a and 2a). Due to rapid deterioration of the neurological status, a follow- up MRI was performed three weeks later (Figures 1b and 2b), including gadolinium administration and angiographic sequences. A mild periventricular nonspecific leukoencephalopathy and an incipient dilation of the supratentorial ventricles were observed. No abnormal contrast- enhancement was present. MRI angiography and venography showed permeability of the vessels. The patient continued to deteriorate, in a span of several weeks, despite initiating high-dose intravenous methylprednisolone. The clinical suspicion of vasculitis was raised and a third MRI was performed, at 3.5 months from the onset, with a specific protocol including vessel-wall three-dimensional (3D)-high-resolution pre- and post-contrast black-blood sequences. This MRI showed severe progression of the leukoencephalopathy, and associated atrophy with marked dilation of the ventricles and the subarachnoid spaces (Figures 1c and 2c). High-resolution vessel-wall sequences showed multiple arterial segments with concentric contrast enhancement of the wall, of proximal and distal distribution (Figure 3), compatible with vasculitis. A treatment with high-dose intravenous cyclophosphamide was started. Clinical follow- up revealed a progressive improvement of the drowsiness with eventually stabilized neurological status, but the cognitive deficit was already extremely impaired. The fourth MRI exam, at seven months from the clinical onset, showed even more severe atrophy (Figures 1d and 2d). A comparative of the hippocampal formation, crucial for the memory circuit, showed normal features on the first MRI (Figure 2e) and marked “knife blade” atrophy on the last study (Figure 2f). Concomitant diseases, including cerebrovascular and cardiovascular events, were ruled out. 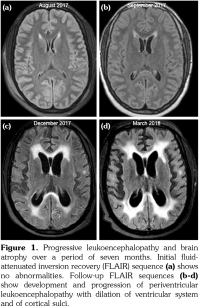 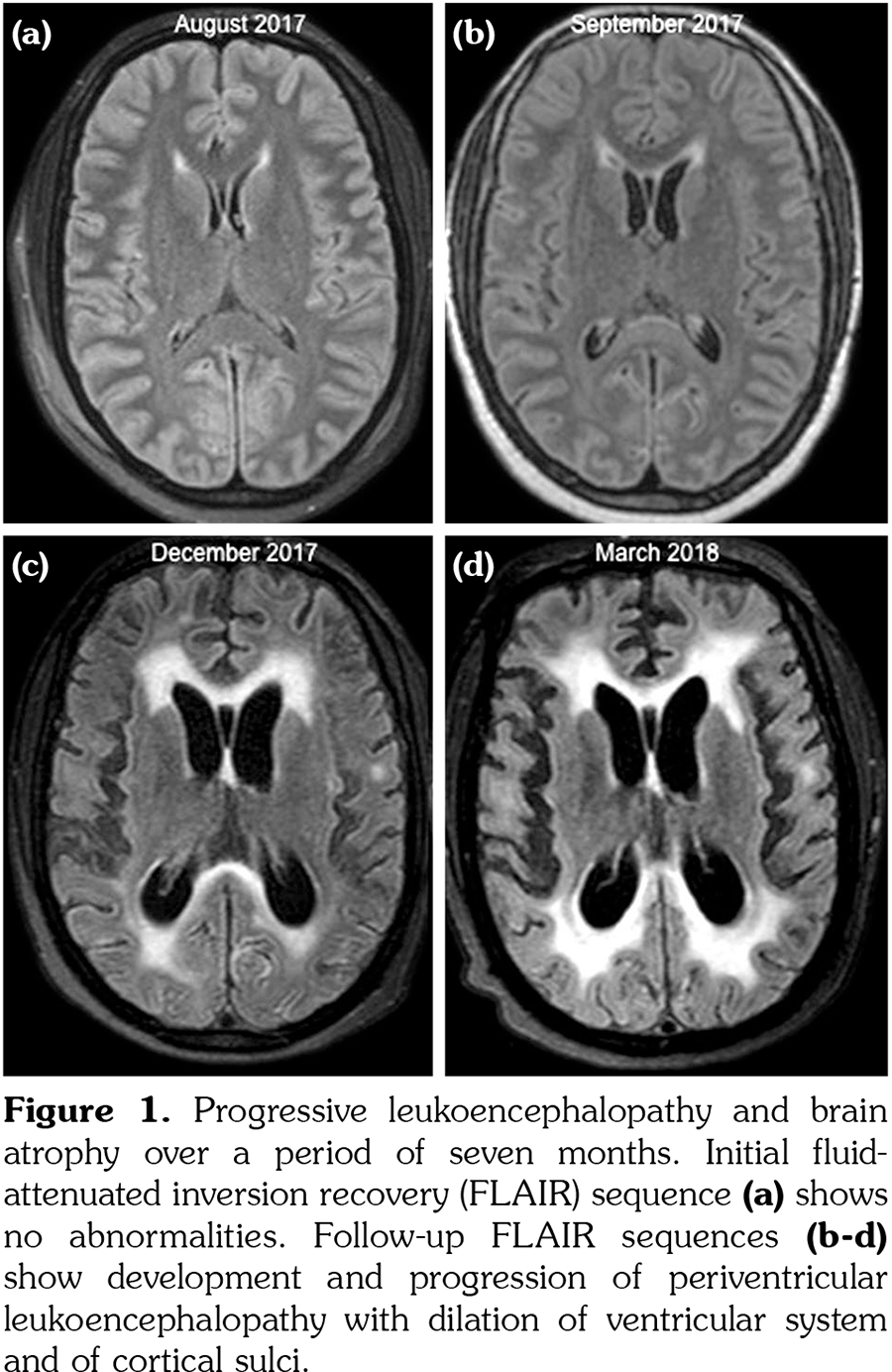 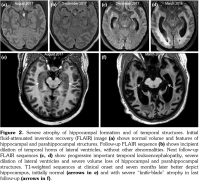 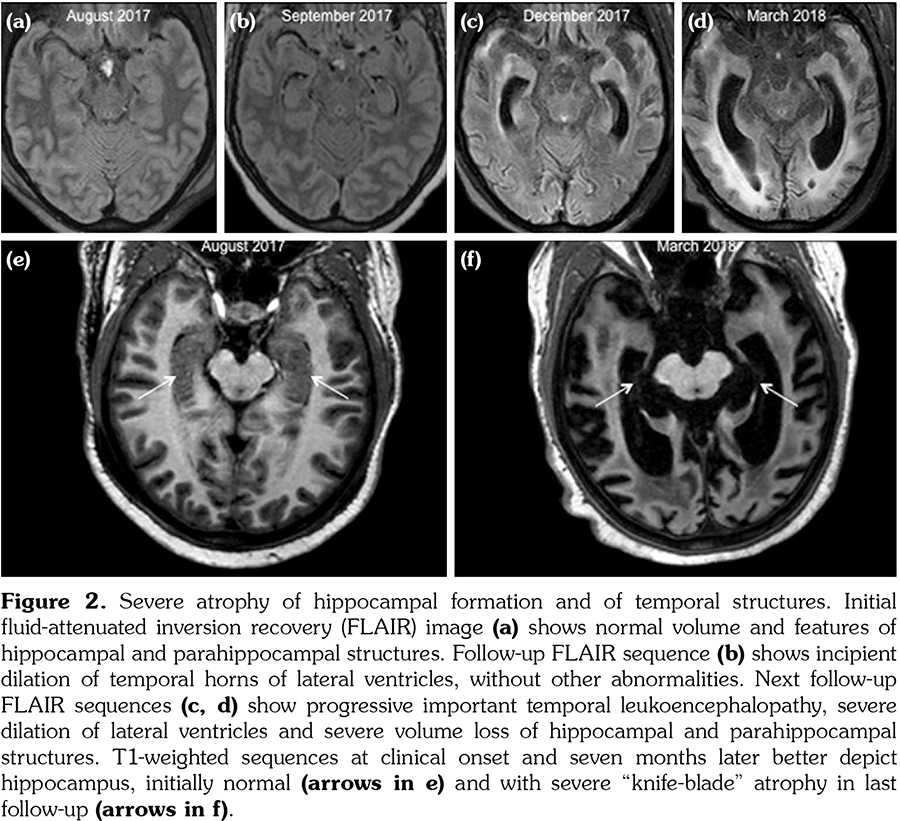 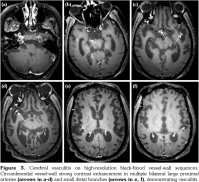 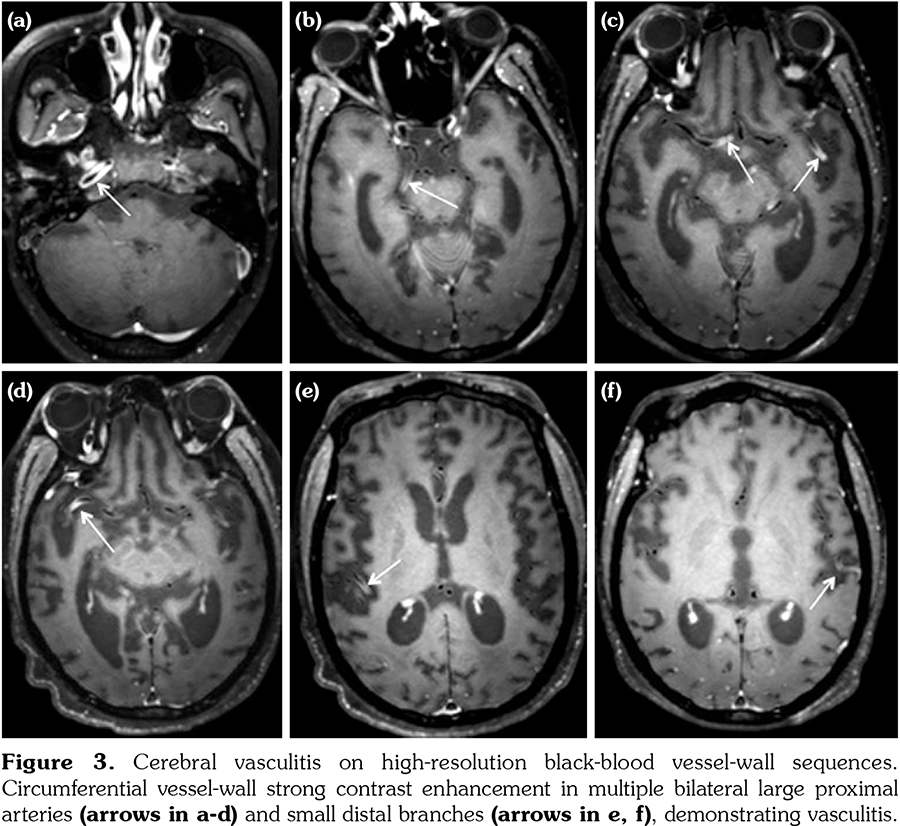 Neuropsychiatric SLE remains a major cause of morbidity in patients with SLE, despite all recent diagnostic and therapeutic advances. The most frequent MRI abnormalities in NPSLE are white matter lesions and brain atrophy, although the reported frequencies vary widely, probably reflecting the heterogeneity of the studied population.[7,8] The presence of cortical atrophy was reported at a mean age of 42.5 years in NPSLE.[7] Less frequently, NPSLE patients could present inflammatory lesions on MRI, which usually disappear after aggressive corticosteroid or immunosuppressive treatment. They were reported in 6.5% of patients, and were correlated with low complement levels, supporting an immune-mediated pathogenesis of NPSLE.[9] This pattern has been related to primary cerebral vasculitis, which is however considered to be uncommon in SLE.[2,7,10] Post-mortem histopathological studies reported cerebral vasculitis in less than 10% of NPSLE patients.[9,11] Imaging findings of vasculitis in NPSLE were rarely described, when angiography exams revealed focal beadings and circumferential stenosis of arteries.[12-14] On the other hand, a normal angiography cannot rule out vasculitis, and angiography exams are usually normal if small vessels are involved.[11,14] Despite a low risk of complications, a brain biopsy is usually avoided, lacking of high sensitivity due to the sampling error with high false-negative rates. Therefore, no “gold standard” diagnostic test is accepted to date for the diagnosis of cerebral vasculitis.[13,14] Recently, specific vessel-wall sequences emerged. This type of imaging requires a high-field MRI (3T), and the availability of high-resolution (around 0.5 mm isotropic) 3D-black-blood sequences, acquired pre- and post-gadolinium administration.[14-17] Recent technological advances and guidelines were developed to optimize these sequences and to reduce the acquisition time on the one side,[15] and to provide expert consensus recommendations for their implementation in the current clinical practice on the other side.[16,17] This vessel-wall imaging is increasingly used in other pathologies as aneurysms, dissection and strokes. Prospective comparative studies evaluating the feasibility of 3D-black-blood pre- and post-contrast sequences demonstrated that this technique accurately allows the diagnosis of vasculitis, and the intensity of contrast enhancement of the wall correlated with the mural inflammation.[18] In the last year, several publications including these sequences reported vasculitis of different etiologies as varicella- zoster,[19] Sjögren syndrome,[20] or primary vasculitis of the central nervous system.[21] A recent study analyzed the vessel-wall imaging at 3 Tesla MRI in a cohort of SLE patients, and compared the data with a group of healthy controls.[22] They demonstrated different types of vessel-wall focal lesions, more frequent in SLE group, particularly of the first segments of the middle cerebral artery. Moreover, vessel-wall lesions were associated with brain infarctions. Another recent report applied MRI angiography, vessel-wall imaging and transcranial Doppler and described multifocal stenosis of the intracranial arteries in two patients with SLE who presented non-aneurysmal subarachnoid hemorrhage.[23] They concluded that the hemorrhage was due to vasculitis or to reversible cerebral vasoconstriction syndrome and that vessel-wall imaging is an important tool for the diagnosis.

Previous case reports of cerebral vasculitis in SLE patients, documented on biopsy or angiography, described successful treatment with intravenous pulse cyclophosphamide in association or not with corticosteroids.[11,13] Other immunosuppressive drugs as well as new treatments as biological therapies have also been used in SLE-related vasculitis, with variable results.[14] A recent post-mortem brain study compared specimens from NPSLE patients with SLE patients and controls, and demonstrated that histopathological lesions in NPSLE represent a continuum, ranging from focal common vasculopathy to more specific diffuse vasculitis.[9] They also showed that complement deposition was strongly associated with both NPSLE and SLE. Thus, they believe this deposition may be a link between autoantibodies and morphological lesions; therefore, complement inhibition may have novel therapeutic perspectives in NPSLE-related lesions as cerebral vasculitis.

To resume, the novelty factors that the present report brings are the rapid progressive atrophy demonstrated on MRI in a patient with NPSLE, and the depiction of underlying vasculitis on specific vessel-wall imaging. An accurate and timely diagnosis of cerebral vasculitis is fundamental for treatment initiation and outcome, giving the high morbidity and mortality of this condition. The physicians involved in the care of SLE patients should be aware of this type of presentation of NPSLE, and should understand the utility of the recent vessel-wall techniques. Vessel-wall MRI should probably be included in the work-up of SLE patients with unexplained neurological deficits or when a vasculitis could not be ruled out.