Results: G-protein coupled estrogen receptor levels were 0.11 (0.02-0.9) ng/mL in the FMS patients and 0.059 (0.01-0.13) ng/mL in controls, with a statistically significant difference (p=0.037). GPER levels were positively correlated with age and negatively correlated with PRL, while they were not correlated with FIQ. Differential diagnosis for FMS with receiver operating characteristic (ROC) analysis for the serum GPER levels was statistically significant (area under the ROC curve: 0.653, confidence interval: 0.522-0.785, p=0.029). High values indicated FMS, with a threshold of >0.075, sensitivity of 60%, and specificity of 60%.

Conclusion: The GPER levels of FMS patients were higher than those of the controls. Thus, GPER levels may be considered as a biomarker in the diagnosis of FMS independent of disease severity.

Fibromyalgia syndrome (FMS) is a complex syndrome characterized by chronic pain, fatigue, and dysfunctional symptoms. The etiology of FMS is still controversial. Genetic susceptibility, environmental triggers, and neuromodulation affect the onset and duration of the disease.[1] The common symptoms of FMS include sleep disorders, affective disorders, chronic generalized pain, and fatigue. The pathophysiology of FMS has not been elucidated yet, and no treatment is available for relieving all of the symptoms. The prevalence of FMS in females is explained by increased symptoms in sex hormone-related events such as premenstrual, pregnancy, postpartum, and postmenopausal.[2] It has a significant impact on the social life and quality of life in the areas of the ability to go to work, participate in daily life, entertainment, and sporting activities. Treatment includes medication such as analgesics, tricyclic antidepressants, cognitive behavioral therapy, exercises, and training programs.

Hormonal fluctuations occur in FMS patients due to chronic pain and stress. Many studies have revealed hypothalamo-pituitary-adrenal axis dysfunction hypothesis. It is thought that hypothalamic corticotropin-releasing hormone (CRH) neurons are active in the central nervous system in association with chronic stress. This activation results in irregularities in the release of gonadotropins and cortisol hormone.[1,2]

Estrogen plays an important role in normal physiology, aging, and regulation of many diseases. Several endogenous estrogens, particularly estradiol (E2), are known to mediate adverse effects that may affect puberty, reproductive, metabolic, endocrinological, musculoskeletal, nervous, cardiovascular, and immunological systems.[3,4] Sex hormones, particularly estrogens, have important effects on pain duration and sensitivity (hyperalgesia), while estrogen deficiency is considered as a risk factor for the development of FMS.[5,6] There are few studies investigating the role of estrogen in the FMS treatment. Blümel et al.[7] have demonstrated epidemiological, etiopathogenic, symptomatic, and therapeutic similarities between FMS and climacteric syndrome. It has been observed that some symptoms reverse after hormone replacement therapy.[7]

Recent studies have shown that G-protein coupled estrogen receptor (GPER/GPR30) binds to estrogen directly and mediates its activity. It was shown to be a therapeutic target and antagonist, also a prognostic indicator in some diseases.[8,9] Therefore, in this study, we aimed to analyze the GPER/GPR30 activity in patients with FMS.

This single-centered prospective case-control study was conducted at Kahramanmaraş Sütçü İmam University Faculty of Medicine between January 2018 and April 2018 and included 40 female patients with FMS (mean age 42.9±11.2 years; range, 18 to 64 years) diagnosed according to the 2010 American College of Rheumatology classification criteria and 30 age- and body mass index-(BMI) matched healthy controls (mean age 43.7±13.6 years; range, 19 to 64 years). Age, height, weight, sex hormones (morning) including E2, follicle stimulating hormone (FSH), luteinizing hormone (LH), and prolactin (PRL) were recorded. The study protocol was approved by the Kahramanmaraş Sütçü İmam University Faculty of Medicine Ethics Committee (protocol no: 2017/145). A written informed consent was obtained from each participant. The study was conducted in accordance with the principles of the Declaration of Helsinki.

Those with a history of hormone replacement therapy, endocrinological disorder, gynecologic or other malignancies, active infection or inflammatory rheumatological disease were excluded. The Fibromyalgia Impact Questionnaire (FIQ) was used to evaluate patients’ functional status, disease progression, and outcomes. The Turkish validity study of the FIQ was performed by Sarmer et al.[10] The first item of the scale consists of 10 Likert-type questions. In the second and third items, patients are asked to select the days to allow for the determination of “disease exposure” and “absence from work.” The scores obtained are adapted to 10. The remaining seven questions are based on marking the corresponding points in the equivalent visual scale. The score interval is 0-100.

Venous blood samples were obtained from the antecubital area by phlebotomy. After these samples were allowed to clot, they were centrifuged for 10 minutes at 4,000 rpm (4,000 rpm corresponds to 1,610 g and it is the most appropriate technique). The sera were separated and stored at -80°C until the analysis. This temperature is the most appropriate level of heat where molecules are at the most stable situation.

Serum FSH, PRL, and LH were measured by using a Centaur XP Immunoassay System (Siemens Healthcare GmbH, Erlangen, Germany). Serum GPER (SEG045Hu, Cloud-CloneCorp., Houston, Texas, USA) levels were measured using the commercial enzyme-linked immunosorbent assay kits according to the manufacturer’s instructions. Since the majority of the values were below the limit of sensitivity of the kit (0.125 ng/mL), the concentration was detected by calculation. The margin of error of the measurement is not known as it is rarely used for daily routine.

Statistical analyses were applied using the IBM SPSS version 22.0 (IBM Corp., Armonk, NY, USA). Descriptive statistics were stated as median, minimum/maximum and mean ± standard deviation values. Conformity of the data to normal distribution was evaluated with the Kolmogorov-Smirnov test. In the comparison of groups not showing normal distribution, the Mann-Whitney U test was used. Independent samples (Student’s) t-test was used in normally distributed parameters. Correlations between the variables were examined with Spearman’s test. For diagnostic tests of GPER-1, the receiver operating characteristic (ROC) curve was applied and the threshold value for GPER was manually selected according to both highest sensitivity and highest 1- specificity. A p value of <0.05 was accepted as statistically significant. 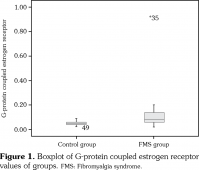 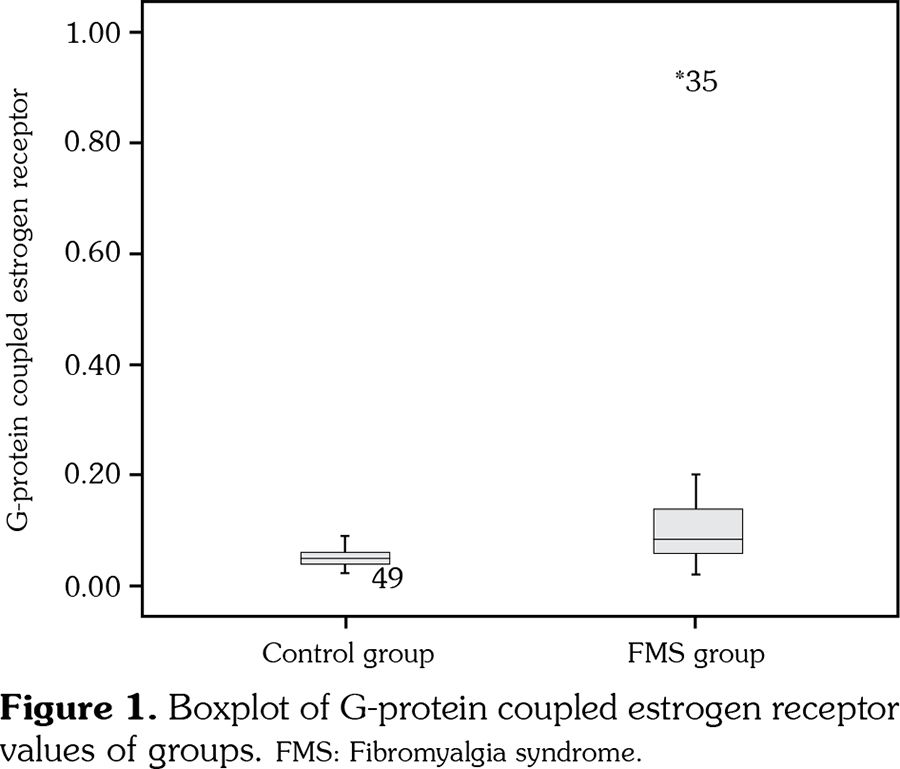 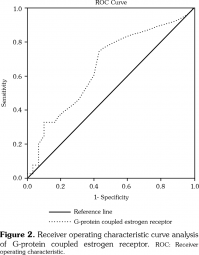 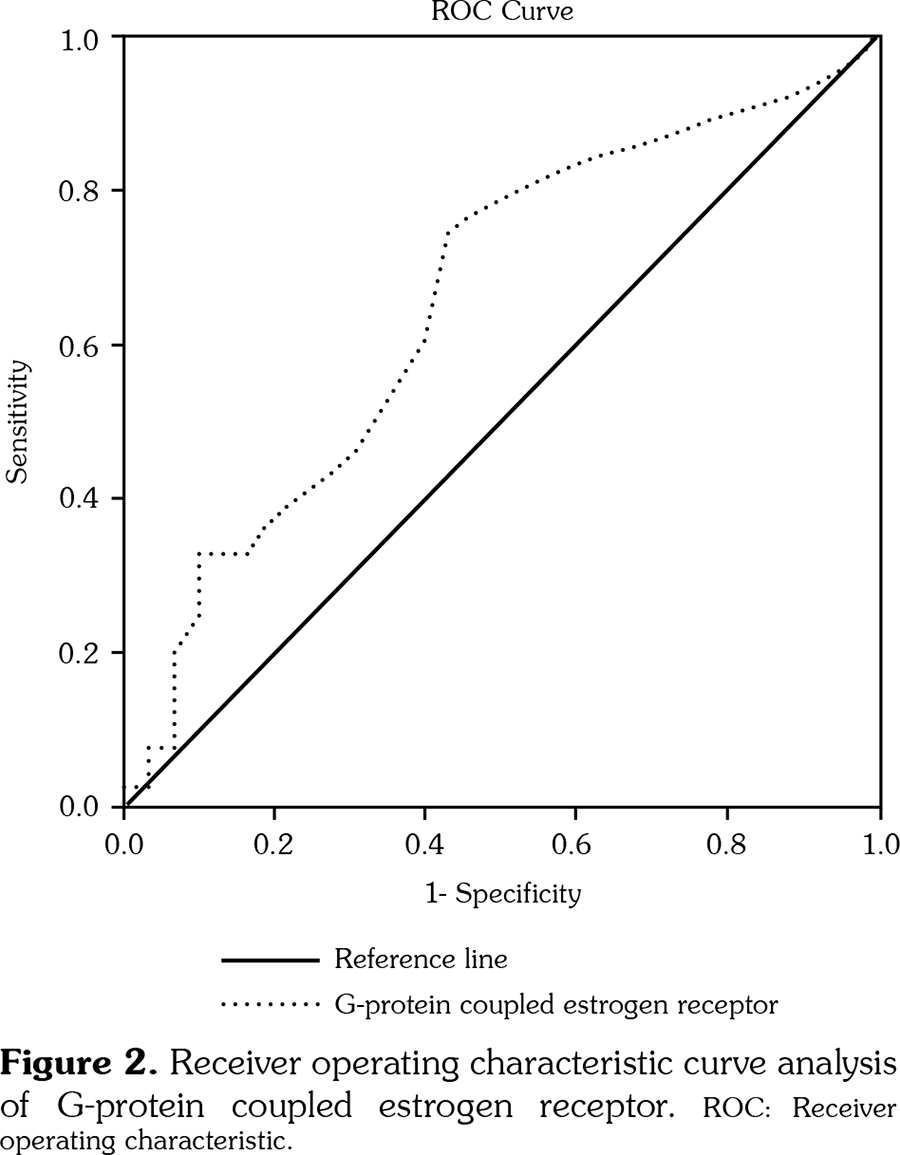 Estrogen is an important metabolic syndrome regulator that includes abnormalities including obesity, insulin resistance/glucose intolerance, hypertension, dyslipidemia, and inflammation.[11] GPER is widely expressed in both normal and pathological tissues in the human body. Recent studies have used a sandwich enzyme immunoassay kit for quantitative in vitro measurement of GPER levels in human serum, plasma, tissue homogenate, and other biological fluids.[12,13]

The GPER has now become recognized as a major mediator of estrogen's rapid cellular effects throughout the body.[8,14] While it is known that GPER has seven membranes and non-genomic signal processing, its functions and mechanisms of physiological effects are not well known.[15] It plays an important role in estrogen-mediated neuroprotection. In light of the current literature, GPER is thought to have role in hypertension, renal disease, atherosclerosis, vascular remodeling, heart failure, reproduction, metabolic disorders, cancer, and menopause.[16-19] It was observed by Lu et al.[18] that ischemic brain damage was reduced by activation of vascular endothelial growth factor A by GPER activation in rats. The presence of low prevalence of E2 is attributed to many diseases in premenopausal females.[6]

One of the important issues emphasized in FMS etiopathogenesis is hypothalamo-pituitary- gonadal axis dysfunction. Hyperactivation of CRH neurons, decreased levels of serotonin and growth hormone, and reduced corticosteroid metabolites in urine were listed in the current data. Different results have been reported regarding changes in sex hormones.[20-22] Increased levels of basal adrenocorticotropic hormone (ACTH), FSH and cortisol; decreased levels of insulin like growth factor-1 (somatostatin C), free triiodothyronine, and estrogen were detected. Systemic increase in CRH, growth hormone-releasing hormone, thyrotropin- releasing hormone, and luteinizing hormone- releasing hormone result in increased ACTH and PRL levels and decreased thyroid-stimulating hormone. Hormonal changes in FMS patients can be explained by chronic pain-dependent primary stress activation of hypothalamic CRH neurons.[20-23] Briefly, neuroendocrine disorders in FMS indicate gonadal steroid hormone abnormalities.[24] In our study, sex hormones of FMS patients were found to be similar to those of controls.

The GPER is expressed throughout the central nervous system with highest levels of expression in the hypothalamo-pituitary axis, hippocampal formation, and brain stem autonomic nuclei.[25,26] Recent evidence suggests that GPER may serve a neuroprotective effect.[27] Fibromyalgia decreases the quality of life in pre- and postmenopausal females. Identification of the possible functions of GPER may guide us in identifying the sex-specific risks. According to our study, GPER levels of FMS patients were higher than those of controls regardless of disease severity and sex hormones. We have also revealed that GPER can be used as a moderate diagnostic test for FMS. We have found high GPER activity, with normal serum E2 in the study group. This may show us the disregulation of metabolic pathways associated with obesity, insulin resistance/glucose intolerance, hypertension, dyslipidemia, inflammation or neuroendocrine hormones, neurotransmitters and cytokines in FMS patients. Pharmacological stimulation of GPER in vivo limits weight gain and improves metabolic output, revealing a promising novel therapeutic potential for the treatment of obesity and diabetes.[28] In our study, GPER was not correlated with BMI in FMS patients. It was suggested that GPER has a modulator role in energy homeostasis (weight control).[29]

In our study, GPER levels were positively correlated with age and negatively correlated with PRL. Increased GPER activity with age may be attributed to the decreased amount of E2 with advanced age. Camilletti et al.[30] have found that local GPER expression is regulated negatively by E2, progesterone, and lack of ovarian steroids after an ovariectomy significantly increases pituitary GPER expression. They have also shown a rapid E2 stimulatory effect on PRL secretion mediated by GPER.[30,31]

Newly discovered roles of GPER are cognition, depression, homeostasis, pain processing, and other associated neuronal functions. Also, increased anxiety, depression or cognitive disorders related with GPER activity have been determined.[37,38] Postmenopausal depression is associated with decreased ovarian hormones. It is believed that discrepancies regarding the nature of estrogens' effects on anxiety are attributable to the differential effects of specific estrogen receptor subtypes.[39] It is not known which estrogen receptor plays a role by potentiating the brain mitochondrial function in the neuroprotection of estrogen. In our study, we have not examined FMS patients in terms of cognitive functions or depression. This may be the subject of future randomized controlled studies.[31]

This study has some limitations. Firstly, there are disagreements in the literature including some suggesting that GPER cannot appear in serum. Secondly, we have expected to find the E2 levels, together with levels of the other sex hormones, to be different in our FMS group. Beyond hypothalamo-pituitary-adrenal axis dysfunction, there may be other confounding factors affecting GPER activity in FMS patients. Furthermore, in the ROC curve analysis, AUC was >0.6, thus the test is moderate as a diagnostic test. Moreover, the small sample size and lack of considering other hormones such as cortisol, progesterone, or testosterone affecting the GPER activity are the other limitations of our study.

In conclusion, many protective effects of estrogens in females are well known. The role of estrogen and its activity on FMS pathogenesis, which often affects females in their reproductive period, should be the subject of new researches. Our study has shown high levels of GPER levels in FMS patients compared to controls. Therefore, GPER levels may be considered as a biomarker in the diagnosis of FMS independent of disease severity and sex hormones.