Fibromyalgia syndrome (FMS) is a clinical condition characterized by chronic widespread pain and tender points at specific localized anatomical sites, fatigue, sleep disturbance, cognitive dysfunction and depressive episodes.[1,2] Previous clinical studies have suggested that genetic, environmental and immunological factors, and peripheral and central mechanisms could play a role in the etiology of FMS, the pathology of which remains unknown.[3,4] Previous clinical studies have demonstrated vasoconstriction at the tender points of patients with FMS, impairment in microvascular circulation and an associated decrease in blood flow.[5,6] The impairment of microvascular circulation in the muscles of patients with FMS reduces aerobic capacity, thus affecting angiogenesis at the relevant site.[5,7]

Vascular endothelial growth factor (VEGF) plays an important role in the growth of blood vessels, prevention of endothelial damage and regulation of microvascular circulation,[8] while hypoxia in particular is known to increase VEGF activity and thereby induce angiogenesis.[9] VEGF binds to and activates two tyrosine kinase receptors–VEGF receptor-1 (VEGFR-1) and VEGFR-2, although VEGFR-1 has a ten-fold higher affinity to VEGF.[10] On the other hand, VEGFR-1 is known to be a negative regulator of angiogenesis, while elevated levels of VEGFR-1 result in pathological angiogenesis.[11,12] The authors consider that impairment in the regulation of angiogenesis may actually be a cause of the impairment demonstrated in microvascular circulation. To our knowledge, there have been only two studies in the literature evaluating the relationship between FMS and VEGF, although evaluating the VEGF level alone may not provide sufficient understanding of the regulation of angiogenesis. In this respect, an evaluation of the VEGF-VEGFR system as a whole may be more beneficial in gaining an understanding of angiogenesis regulation. To our knowledge, previous clinical studies have failed to evaluate VEGFR-1 levels. Therefore, in this study, we aimed to compare the serum VEGF and VEGFR-1 levels between patients with FMS and healthy controls.

Forty pre-menopausal patients (mean age 39.9±10.2 years; range, 22 to 52 years) diagnosed with FMS criteria according to the American College of Rheumatology criteria (1990)[13] and 40 healthy pre-menopausal volunteers (mean age 40.9±8.3 years; range, 25 to 53 years) were included in this study conducted at Cumhuriyet University School of Medicine between February 2018 and August 2018. Patients with any cardiovascular, endocrine or hematological diseases that could affect VEGF and VEGFR-1 levels; patients with an acute or chronic infection, inflammatory rheumatic disease or malignancy; patients with lung disease, such as chronic obstructive pulmonary disease or asthma; patients with an impairment in liver or kidney functions; pregnant and lactating females; patients receiving antilipidemic, antioxidant or anti-coagulant drugs; or those using tobacco products or alcohol were excluded. The study protocol was approved by the Cumhuriyet University School of Medicine Ethics Committee. A written informed consent was obtained from each participant. The study was conducted in accordance with the principles of the Declaration of Helsinki.

The sociodemographic data (height, weight, age) of both groups were recorded, and the disease duration and the number of tender points were recorded for the patients with FMS. Venous blood samples were collected into 3-4 mL biochemistry tubes and centrifuged at +4°C and 3000 rpm for five minutes. The sera was stored at -30°C for the measurement of serum VEGF and VEGFR-1 levels. Human VEGF and VEGFR-1 levels were measured with enzyme-linked immunosorbent assay kits (Boster Biological Technology, Pleasanton CA, USA) according to instructions of the manufacturer.

All data analyses were carried out using the IBM SPSS version 22.0 software (IBM Corp., Armonk, NY, USA). Continuous data were expressed as the mean ± standard deviation. The normal distribution of the data was analyzed using Kolmogorov-Smirnov tests. Student's t-test and a Pearson correlation test were applied when the parametric test assumptions were met. A Mann-Whitney U test was used when the parametric test assumptions could not be met. A p value <0.05 was accepted as statistically significant. For an α value of 0.05, a β value of 0.10, and a 1-β value of 0.90, 40 subjects were included in the FMS group and 40 subjects in the control group, and the power of the test was 0.9091. 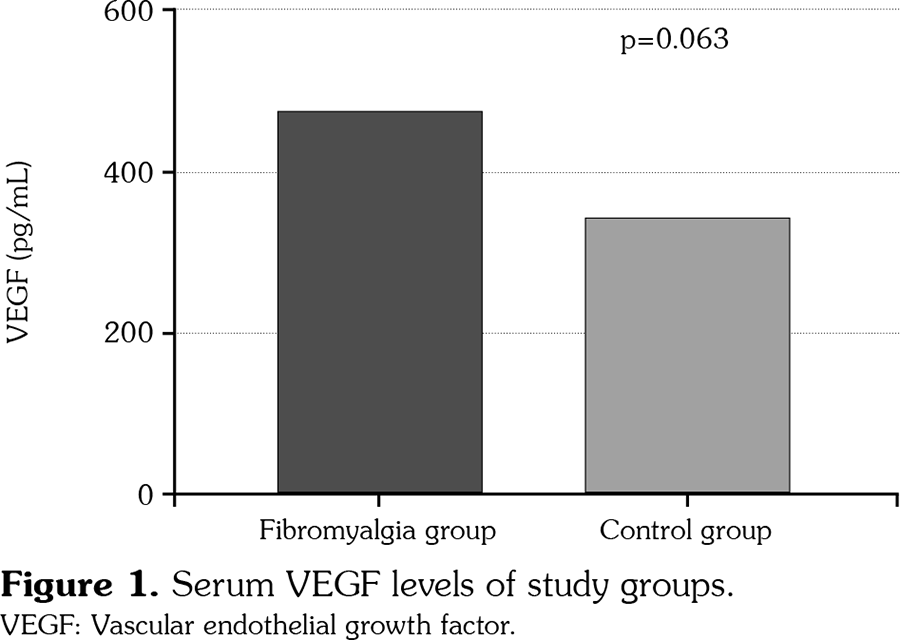 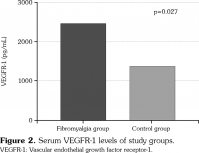 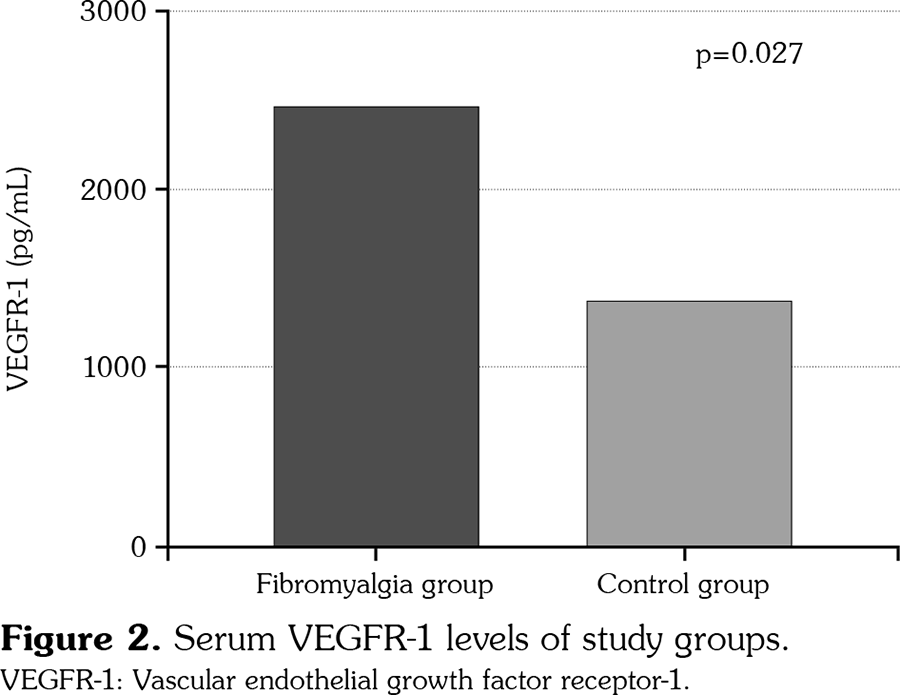 The limitations of the present study include its small sample size, the lack of histopathological examinations, the lack of male patients with FMS, the evaluation of patients with FMS according to the recent classification criteria, no evaluations of pain or quality of life parameters in FMS, and not having measured the other hormones or cytokines that play a role in angiogenesis.