Majeed syndrome (MS) is a rare, autosomal recessive, autoinflammatory disease characterized by recurrent multifocal osteomyelitis, congenital dyserythropoietic anemia, and inflammatory dermatome. In this article, we report the cases of two siblings with MS. Genetic studies of both siblings were obtained and revealed mutations in LPIN2 gene by means of a homozygous single-base pair change in the donor splice site of exon 17 (c.2327+1G>C). Both patients underwent different modalities of treatment for MS which involved immune-suppressive and biologic therapies. We observed a significant clinical response to biologic anti-interleukin-1 (IL-1) therapy in our patients. This impressive clinical response indicates the pivotal role of IL-1 in MS pathogenesis. There are limited data on the use of anti-IL-1 therapy in treating MS due to the rarity of the condition. Anti-IL-1 therapy should be considered as a promising treatment for this disease.

Majeed syndrome is a result of mutations in the LPIN2 gene.(2) LPIN2 gene belongs to the three-member LPIN gene family. LPIN1 (2p25.1), LPIN2 (18p11.31), and LPIN3 (20q12) genes all code for phosphatidate phosphatase enzymes that play an important role in glycerolipid biosynthesis and act as transcriptional regulators.(3,4)

Experiments on primary human and mouse macrophages revealed the pivotal role of LPIN2 in the regulation of the inflammatory cascade by different mechanisms, including downstream excessive interleukin-1 beta (IL-1β) formation. As a consequence, mutations in the LPIN2 gene that encode for LPIN2 affect the important role of LPIN-2 as an innate immune regulator.(5) In this article, we report two cases of siblings suffering from MS who had identical LPIN2 gene mutations. Clinical response to antiinflammatory treatment was different between the two siblings, but both were noted to have responded significantly to anti- IL-1 therapy.

Case 1- A 23-month-old male child presented with episodes of recurring fever, limping for one year, joint pain, and swellings involving the left ankle and the right elbow. Past medical history was uneventful. His vaccinations were up to date and his development was normal. His parents were first-degree cousins and his sister was similarly affected (Case 2) (Figure 1, #28 and #29). Physical examination, including musculoskeletal system, was unremarkable. Complete blood count showed hemoglobin (HB) of 9.3 g/dL, reticulocytes of 1.5%, white blood count of 8.4 109/L (polymorph 7%, lymphocyte 83%, monocyte 4%, and atypical lymphocytes 6%), platelet count of 326 109/L, erythrocyte sedimentation rate of 50 mm/hour (normal, <20), and C-reactive protein (CRP) of 70 mg/dL (normal, <3). Serology screening was negative for rheumatoid factor (RF), antinuclear antibody, and antistreptolysin O (ASO) titer. Serum iron level was 7 μmol/L (normal, 6.0-27.0); however, creatinine phosphokinase, liver function tests, urea, electrolytes, and creatinine levels were all normal. Urine and stool analysis were normal. A written informed consent was obtained from the patients’ guardians. 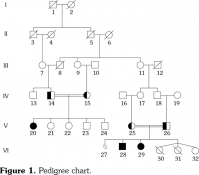 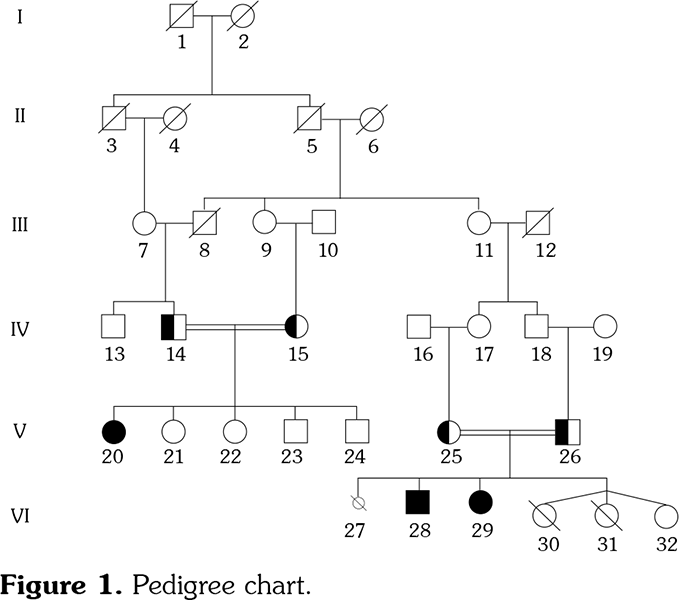 He was started on non-steroidal antiinflammatory drugs (NSAIDs), naproxen, and elemental iron. His fever and joint pain subsided after two weeks. However, two weeks later, he started complaining of pain in the lower end of the left tibia. Three-phase bone scan showed increased tracer uptake in the distal metaphysis of the left tibia in all phases, including flow phase, blood pool, and delayed phase (Figure 2). Plain X-ray of the left leg revealed a well-defined lucency in the distal part of tibial diaphysis with peripheral sclerosis (Figure 3a). Magnetic resonance imaging (MRI) of the left leg revealed a lesion in the left distal tibia diaphysis, which appeared as a central hypointensity with a peripheral rim of signal intensity, with enhancement following administration of intravenous contrast medium (Figure 3b-d). Open bone biopsy of the lower end of the left tibia revealed viable compact bony trabeculae with fibrosis and congestion in the marrow spaces. Features were of periosteal proliferation and were consistent with chronic osteomyelitis (Figure 4). Bone aspirate culture was negative. 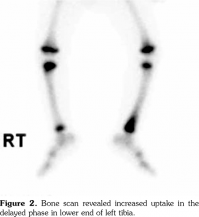 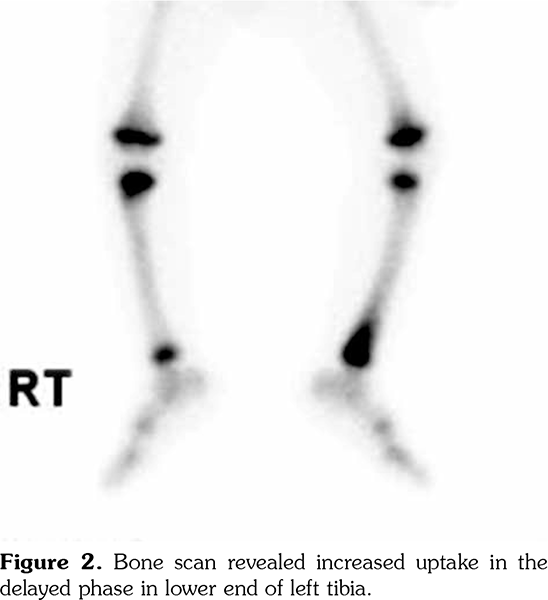 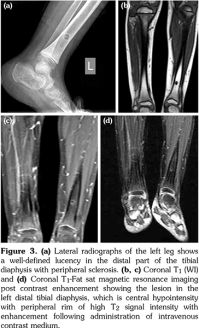 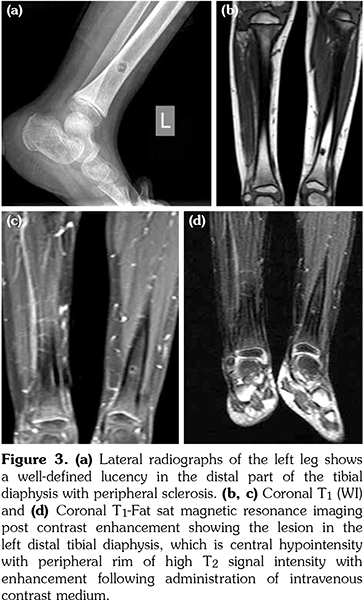 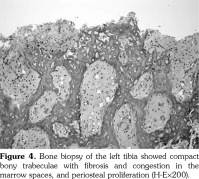 Figure 4. Bone biopsy of the left tibia showed compact bony trabeculae with fibrosis and congestion in the marrow spaces, and periosteal proliferation (H-Ex200).
× 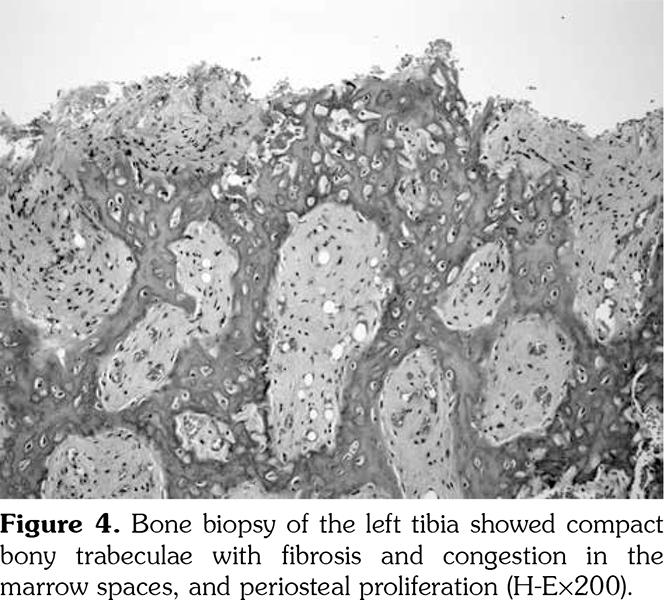 Accordingly, based on impression of non- bacterial osteomyelitis, he was started on prednisolone 1.2 mg/kg/day. Initially, he responded well. However, after six weeks, he presented with right ankle swelling and pain on movement. Etanercept (anti-tumor necrosis factor [TNF]) was started. He remained well for six months after which prednisolone was gradually tapered. When prednisolone dose was tapered down to 3 mg daily, he clinically relapsed and presented with bony pain at the left tibia. The episode was controlled by pulses of methylprednisolone (MP) infusion of 10 mg/kg/day for three days, followed by increased dose of oral prednisolone. At this stage, etanercept was discontinued and he was maintained on prednisolone. Three months later, he suffered from frequent episodes of bone pain and CRP increased to 50 mg/L. Anti-IL-1 (anakinra) was started at a dose of 2 mg/kg/day. One month later, the patient’s clinical condition significantly improved, his CRP decreased to 3 mg/L, and HB increased from 9.0 g/dL to 11.0 g/dL. Prednisolone dose was gradually tapered and discontinued. He was maintained on anti-IL-1 therapy for more than a year with a stable clinical condition. Radiological follow-up of left tibia revealed almost resolved bony lesion.

Case 2- Seventeen-month-old female patient who was the sister of case 1 presented with a history of pain in the calves and soles accompanied with intermittent episodes of limping for two months. Her past history was uneventful and her vaccinations were up to date. On physical examination, she was noted to have non-specific tenderness in her ankles and metatarsophalangeal joints that was not associated with any swelling. Plain X-rays of both legs showed ill-defined lucency in distal metaphysis of both tibias (Figure 5a). MRI of the ankle joints was not performed. Laboratory studies revealed a HB level of 7.7 gm/dL and serum iron level of 3 μmol/L. Peripheral blood smear showed dimorphic red blood cells with anisopoikilocytosis (Figure 5b). Tests for the presence of antinuclear antibodies, RF, and ASO titer were all negative. CRP was 54 mg/L. Bone marrow aspiration revealed dyserythropoiesis, suggesting CDA (Figure 5c). The patient was started on naproxen and iron therapy, for which considerable improvement was noted.

Two months later, the patient developed right ankle pain with associated swelling and tenderness. Based on the evident similarity between the patient’s and her brother’s (Case 1) clinical presentation, she was started on MP pulse therapy for three days followed by oral prednisolone of 1 mg/kg/day. After three months, prednisolone dose was tapered due to recurrent upper airway infections attributed to steroid therapy. Two weeks later, she relapsed with similar symptoms and was started on etanercept therapy.

After four months, patient’s inflammatory markers decreased, but her anemia and musculoskeletal abnormalities persisted. Etanercept was discontinued and anakinra (anti-IL-1 therapy) was started at 2 mg/kg/day. Two weeks after anakinra treatment, patient’s clinical condition and laboratory abnormalities were noted to have markedly improved, with CRP level decreasing from 45 mg/L to 3 mg/L and HB level increasing from 9.4 g/dL to 11.0 g/dL. Patient was maintained on anti-IL-1 and at age four one year later, she remained asymptomatic while repeated radiograph of both tibias revealed significant improvement in the bony lesions.

The clinical features of both siblings exhibited chronic osteomyelitis and CDA, which were consistent with the diagnosis of MS. The family history revealed a second degree cousin who was diagnosed with MS during the infancy period (Figure 1, #20), a case that we had previously published.(6) Genetic studies were requested for both patients and their mother. The father’s deoxyribonucleic acid (DNA) sample was not available.

Genomic DNA was isolated and sequenced from the patient using a next generation sequencing (NGS) technology. When a single pathogenic or likely pathogenic variant is identified in a gene with autosomal recessive inheritance, the laboratory ensures that 100% of the coding sequences of that gene are covered either through NGS or Sanger sequencing technologies.

Exon 17-intron 17 of the LPIN2 gene was analyzed by polymerase chain reaction and sequencing of both DNA strands of the entire coding region and the highly conserved exon- intron splice junctions. The reference sequence was performed according to Genbank accession number LPIN2: NM_014646.2.

In both patients, a homozygous single-base pair change in the donor splice site of exon 17 of the LPIN2 gene (c.2327+1G>C) was detected. According to Human Gene Mutation Database Professional 017.1, this variant was previously described as the gene causative of MS.(6) The mother was heterozygous for this mutation. Molecular analysis was not obtained for the father.

A previous study has reported cases of familial MS in two siblings. One sibling developed the disease at three weeks and the other sibling at two months of age.(7) MS has been previously described in consanguineous Arab, Turkish, and Indian families only. The condition is caused by mutations in LPIN2 gene.(2) Five LPIN2 pathological variations have been described so far. These variations include a missense mutation c.2201C>T (p.Ser734Leu) (Family A) and a frame-shift mutation (c.540-541delAT) in which the amino acid in position 180 from threonine is changed to proline followed by a stop codon in position 181 (Family B) (1), a homozygous single-base pair change in the donor splice site of exon 17 (c.2327+1G>C) (p.Arg776SerfsTer66(6,8)) which is a homozygous 2-base pair deletion (c.1312_1313delCT; p.Leu438fs+16X,(9)) and finally, a homozygous mutation (c.2241_2243delinsGG) which results in a premature truncation of the protein at amino acid 747 (p.Tyr747*).(10)

Autoinflammatory diseases are characterized by recurrent bouts of inflammation without a high-titer of autoantibodies. Most are due to dysregulation in IL-1 pathway, which result in excessive production of IL-1.(11) IL-1 targeting in the treatment of monogenic inflammatory diseases, cryopyrin-associated periodic syndromes, and IL-1 receptor antagonist deficiency has yielded successful results.(12,13)

Variable outcomes were obtained after using NSAIDs, corticosteroids, bisphosphonates, and biologic agents to treat MS symptoms.(1,2) However, limited data are available on the treatment of MS with anti-IL-1 therapy. Cases of two siblings who presented in early months of life with CRMO, CDA, and elevated inflammatory markers were previously reported. A high level of proinflammatory cytokines was detected in these patients which include IL-1β, IL-6, TNF-α, and interferon gamma (INF-γ). Dramatic improvement in bone inflammation, cytokine levels, and inflammatory markers was observed in these patients treated with anakinra after failure of anti- TNF therapy.(9) In addition, our observation is in line with another study noting the effectiveness of anti-IL-1 therapy in treating a child with MS.(15) These data strongly support the idea that IL-1 plays a key role in the development of MS, and that IL-1 blockade is observed to lead to improved and sustained control of MS disease activity.

In conclusion, we reported two cases of MS patients who experienced significant clinical response to an anti-IL-1 agent (anakinra). This knowledge may promote early use of medications targeting IL-1 in autoinflammatory conditions similar in pathogenesis to MS.