Hairy tongue is a benign and mostly asymptomatic disorder characterized by elongation of papillae with typical hairy-like appearance on the dorsal surface of the tongue. Many medical conditions, antibiotics, and drugs inducing xerostomia are associated with hairy tongue. In this article, we report a female patient with polymyalgia rheumatica who developed hairy tongue following treatment with prednisolone. Clinicians should be aware of the predisposing factors and drugs that may have a role in the development of hairy tongue.

Black hairy tongue (BHT) is a benign disorder characterized with hypertrophy and elongation of papillae with hairy-like appearance on the dorsal surface of the tongue.(1) Although the most common discoloration of the tongue is black, hairy tongue may also present in brown, yellow, and green colors.(2) There is an abnormal keratin accumulation in filiform papillae caused by defective desquamation which prevents normal debridement of papillae, leading to accumulation of debris, bacteria, and fungi.(3) The etiology of hairy tongue has not been fully understood. Male sex, older age, smoking, alcohol use, poor oral hygiene, and patients on certain drugs are at risk for BHT.(2) Although hairy tongue is mostly asymptomatic, rarely nausea, halitosis, and taste changes can be seen.(4) Diagnosis of BHT principally relies on visual inspection of the tongue and inspection of the elongated and discolored filiform papillae. Oral hairy leukoplakia, “pseudo- hairy tongue”, pigmented fungiform papillae of the tongue, acanthosis nigricans, congenital lingual melanotic macules, congenital melanocytic nevi, premalignant leukoplakia, squamous cell carcinoma, and hypertrophic herpes simplex virus (HSV) infection should be considered in differential diagnosis.(5)

A 60-year-old female patient diagnosed with polymyalgia rheumatica admitted to our rheumatology clinic. She was prescribed 10 mg/day prednisolone two months before. She discontinued prednisolone due to relief from symptoms; however, her complaint restarted after discontinuation. She was prescribed 10 mg/day prednisolone again. One week later, she admitted with an asymptomatic green-brown discoloration of the tongue. She did not have pain, metallic taste, dysgeusia, burning mouth, or halitosis. She did not have xerostomia. She was non- alcoholic and non-smoker, with no history of drug intake except prednisolone. She reported that similar color change and appearance developed in previous oral systemic glucocorticoid use. The previous appearance developed after 10 days of glucocorticoid use and hairy-like appearance resolved after two weeks. She did not brush her tongue or use any topical ointment for the first appearance. There were green-brown hairy-like projections on the middle and posterior one-thirds of the dorsal surface of the tongue (Figure 1). There was no discoloration on the buccal mucosa and palpable cervical lymph node. Serology for hepatitis and human immunodeficiency virus were negative. Fungal culture was negative. Based on clinical findings, diagnosis of hairy tongue was established. Prednisolone was discontinued. She was recommended to clean her tongue with a soft toothbrush twice daily and give more importance to oral hygiene. Two weeks later, we observed that the hairy coating on the tongue was decreased significantly (Figure 2) and it disappeared completely at the third week. A written informed consent was obtained from the patient. 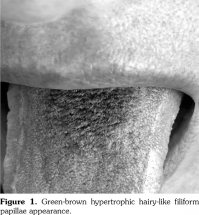 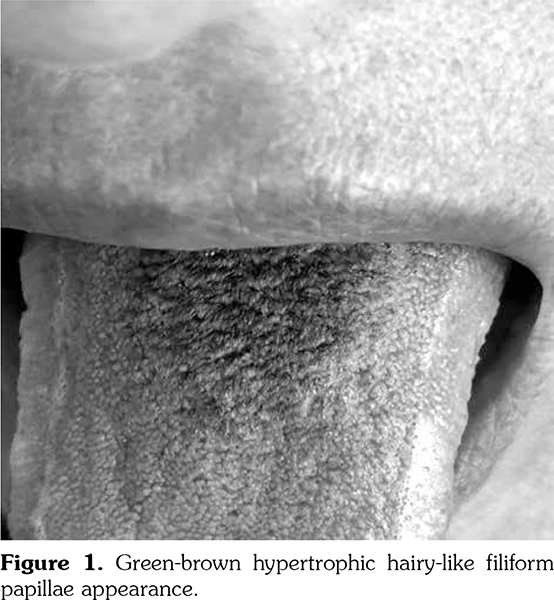 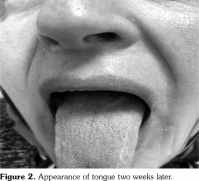 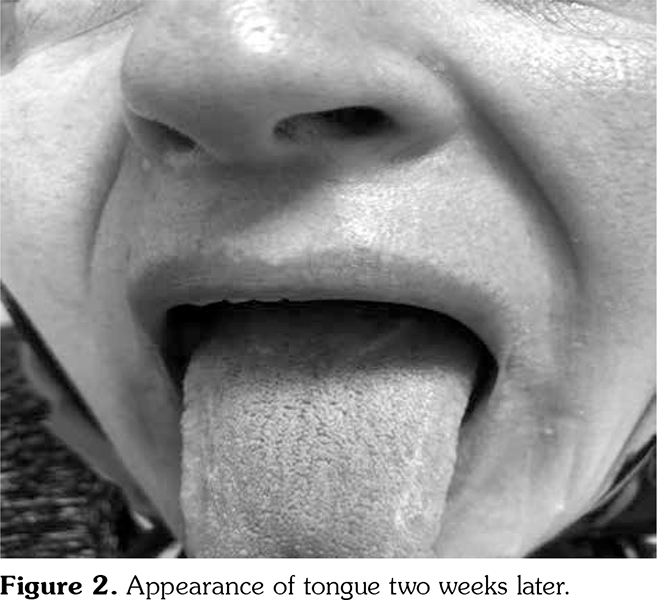 Using Naranjo adverse drug reaction  (ADR) probability scale, we presented a case of prednisolone-induced hairy tongue in a 60-year-old female patient.(6) Many antibiotics such as penicillin, erythromycin, and linezolid and medications predisposing individuals to xerostomia are associated with BHT.(2,7-9) Graft versus host disease, amyotrophic lateral sclerosis, and trigeminal neuralgia are medical conditions that predispose to BHT.(10-12) Our patient was not using any other drugs except prednisolone. BHT exhibits a preference for dorsal tongue.(2) There is no objective diagnostic criteria for BHT.(13) Microscopic evaluation demonstrates elongated filiform papillae longer than 3 mm.(2) Although tongue biopsy can be supportive for diagnosis, it is not required when the lesion is typical and responds to debridement.(2) Hairy-like appearance showed typical localization for BHT in our patient and elongated papillae were seen clearly without microscopic examination.

A detailed history is required in patients presenting with signs of BHT to identify the contributing factors and differential diagnosis. There were no predisposing factors for BHT such as alcohol abuse, smoking, drinking excessive coffee, tea, or poor oral hygiene in our patient. Because she had no predisposing factors while having hairy-like appearance after previous steroid use and a Naranjo ADR score of 8 (Table 1), the appearance of hairy tongue was associated to prednisolone use.

Although darkly stained tongue is seen in “pseudo-black hairy tongue”, there is no elongated filiform papillae. There is white plaque appearance on the dorsal and ventral surfaces of the tongue, buccal mucosa, and gingiva in oral hairy leukoplakia. Pigmented fungiform papillae are characterized by hypertrophied lesions mainly on the lateral aspect and apex of the tongue.(2) Congenital lingual melanotic macule should be evaluated in infants.(14) There are HSV vesicles which are easily seen on the dorsal tongue in hypertrophic HSV. Premalignant leukoplakia can exist as painful, indurated, white, and adherent plaques.(15)

Education of patients who are at risk for developing BHT is the first-line treatment of BTH.(5) Discontinuation of offending drugs, altering predisposing factors, and maintaining good oral hygiene are needed in treatment. Gentle debridement of tongue with a soft toothbrush leads to desquamation of the hyperkeratotic papillae.(2,5) Oral and topical retinoids can be used as part of second-line treatment.(16,17) In our patient, hairy tongue resolved after debridement of tongue with a soft toothbrush and discontinuation of prednisolone.

In conclusion, BHT is a benign, self-limiting, and usually asymptomatic disorder. Antibiotics and drugs that produce xerostomia, poor oral hygiene, or smoking are possible risk factors for hairy tongue. Detailed history should be obtained to rule out risk factors in the setting of accompanying prednisolone use. Rheumatologists should be aware of the probable prednisolone- induced hairy tongue in clinical practice and examine hairy tongue with other dermatological side effects. Patients using prednisolone should be educated to continue good oral hygiene.