Aseptic Meningitis With Systemic Lupus Erythematosus: Case Report and Review of the Literature

In this article, we describe a 29-year-old female patient with a history of systemic lupus erythematosus (SLE) in remission for six years presenting with fever, headache, and arthritis. Neurological examination was normal, as were brain computed tomography and magnetic resonance imaging, but based on results of cerebrospinal fluid examination and symptoms indicating active SLE, including erythema and oligoarticular arthritis, she was diagnosed as aseptic meningitis secondary to SLE recurrence. Her symptoms promptly improved with prednisolone treatment. This case suggests that aseptic meningitis should be considered in SLE patients, even when neurological findings are equivocal.

Systemic lupus erythematosus (SLE) is a complex autoimmune systemic disease. Patients with SLE may experience a variety of neurological and psychiatric manifestations, collectively named neuropsychiatric SLE (NPSLE), that account for significant morbidity and mortality. Neuropsychiatric symptoms are encountered in 21-95% of patients with SLE and can be directly related to central nervous system (CNS) manifestations.(1-3) Meningitis is a rare CNS manifestation, observed in 1.4-2.0% of patients with SLE.(4-6) It can be either septic or aseptic, almost 50% being aseptic.(5,7) Aseptic meningitis in patients with SLE is mainly caused by nonsteroidal anti-inflammatory drugs, such as ibuprofen and immunosuppressants.(8-9) Cerebrospinal fluid (CSF) examination is necessary for the diagnosis of meningitis, and definitely indicated in the presence of signs of meningeal irritation, such as neck stiffness, Kernig’s and Brudzinski’s signs. In this article, we report a case of aseptic meningitis as a manifestation of recurrence of SLE in a patient not receiving nonsteroidal anti-inflammatory drugs or immunosuppressants and with negative neurologic examination.

A 29-year-old female patient with a history of SLE was admitted to our hospital because of fever, bilateral knee pain, and headache. Six years previously, she was diagnosed with SLE manifested by facial erythema, oral ulcers, photosensitivity, arthritis, headache, leukocytopenia, thrombocytopenia, and antinuclear antibody and anti-Smith antibody positivity. Anti-double stranded deoxyribonucleic acid antibody, anti-U1-ribonucleoprotein antibody or other autoantibodies was undetected. She did not have any neurological symptoms. She was subsequently treated with 30 mg/day of prednisolone and achieved remission. After gradual tapering of prednisolone, clinical and serological remission was maintained by a maintenance dose (5 mg/day) of prednisolone. Six years after the diagnosis of SLE, she developed fever, joint pain, and headache. An outpatient clinic blood test indicated a high level of C-reactive protein (CRP) and she was therefore admitted to our hospital. Physical examination revealed normal blood pressure (124/80 mmHg). She was febrile (39.5°C). She received paracetamol before admitting to our hospital, but her fever did not improve. Findings of ocular, lung, cardiovascular, abdominal, and neurological examinations were normal, but swelling and tenderness of both knee joints and facial erythema were noted. Neck stiffness, Kernig’s and Brudzinski’s signs and other neurological findings suggestive of meningeal irritation were absent. Laboratory tests revealed moderate thrombocytopenia (blood platelet count 86,000/μL) and a high level of CRP (8.76 mg/dL). There was no increase in circulating immune complexes as measured by serum Clq binding activity, and serum complement levels were normal. Other blood parameters, including levels of liver enzymes, blood glucose, white blood count and hemoglobin, were within normal ranges. CSF examination revealed 107 leukocytes/mm(3) with 47% mononuclear cells, glucose of 54 mg/dL, and protein of 75.2 mg/dL. CSF smears, cultures for bacteria and fungi, and virus antigen determinations for influenza virus, Herpes simplex virus, Varicella zoster virus, cytomegalovirus, Coxsackie virus, and Epstein- Barr virus were negative. Computed tomography and magnetic resonance imaging (MRI) scans of the brain were interpreted as normal. A written informed consent was obtained from the patient.

She was diagnosed with meningitis and received antibiotic (clarithromycin and ceftriaxone) for five days, but her symptoms did not improve. Then, we finally diagnosed aseptic meningitis as recurrence of SLE on the basis of the results of CSF examination and the presence of erythema and arthritis indicating active SLE. The antibiotic treatment was discontinued, and treatment with 30 mg/day of prednisolone was initiated, followed by prompt defervescence and relief of the headache. The bilateral knee arthritis also disappeared in several days and the level of CRP decreased to 0.03 mg/dL after 15 days. She was treated with hydroxychloroquine and clinical and serological remission was maintained during the observation.

In this article, we describe exacerbation of SLE presenting as a case of aseptic meningitis with oligoarticular arthritis, headache, and facial erythema. Aseptic meningitis is a rare neurologic manifestation of SLE.(4-6) It can be induced by the disease itself, as a reaction to medications or infection such as virus and is diagnosed by CSF examination and clinical information. Our case had fever and headache but no meningeal irritation signs such as neck stiffness, Kernig’s or Brudzinski’s signs, and no other neurological findings. We diagnosed her as aseptic meningitis due to recurrence of SLE on the basis of the SLE symptoms of erythema and oligoarticular arthritis, the results of CSF examination, and the response to steroid therapy. 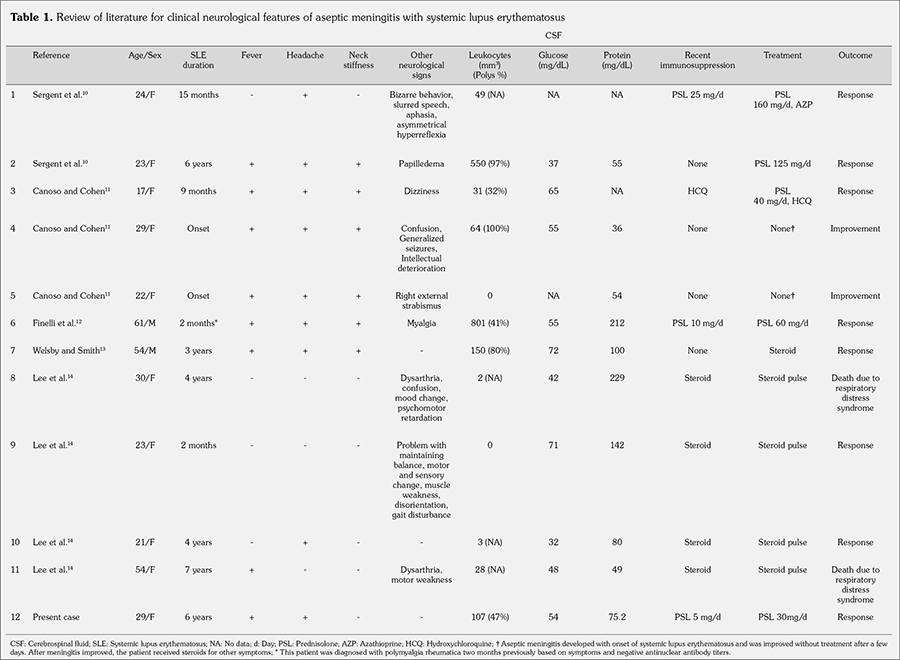