The use of anti-tumor necrosis factor (anti-TNF) therapies for treatment of rheumatic diseases is increasing every day and the results are positive. Case reports about skin reactions developing after use of these medications - newly developing psoriasis, increase/flare-up of existing psoriasis - are found in the literature at rates that cannot be ignored. Psoriasis developing after the use of these agents for treatment is a paradoxical side effect, with no clear understanding of the cause though several hypotheses exist. In this article, we present five cases with this paradoxical side effect developing after anti-TNF treatment accompanied by the literature with the aim of aiding in finding an approach to these cases.

Tumor necrosis factor-alpha (TNF-α) is a cytokine that plays an important role in the pathogenesis of a variety of inflammatory rheumatic diseases and blockage of this cytokine has been used successfully for treatment of rheumatoid arthritis (RA), spondyloarthropathies, juvenile idiopathic arthritis, inflammatory bowel disease (IBD) and psoriasis. Patients receiving this treatment are monitored and tested by clinicians for possible side effects. However, since the use of anti-TNF for treatment of inflammatory rheumatic diseases including psoriasis, cases have been published about the development of new psoriasis and flare-ups/worsening of existing psoriasis.(1) In this article, we present five patients with psoriatic skin lesions developing or worsening after beginning anti-TNF treatment for a variety of rheumatic diseases during one year of monitoring to attract attention to this paradoxical side effect.

Case 1- A 54-year-old male patient monitored for diagnosis of ankylosing spondylitis (AS) applied with complaints of rash and hardness on the soles of both feet six months after beginning anti-TNF (infliximab) treatment. Physical examination showed white, thick, shiny dry flakes on a pink-red, slightly swollen backdrop in the middle of the soles of both feet. Nail examination was normal. There was no peripheral arthritis. There was no history of psoriasis or other skin disease in the patient’s history or family history, with no peripheral joint involvement, IBD or uveitis. The lesions formed five-six months after the beginning of anti-TNF treatment, with no trauma infection in the history. Complete blood cell count, kidney-liver functions, and acute phases were normal, pelvic radiograph showed bilateral stage IV sacroiliitis. The patient consulted with the dermatology clinic and fungal infection was excluded. Medication-related skin reaction was assessed. Topical calcipotriol-betamethasone were begun. With lesions not reducing in spite of topical treatment, the patient’s treatment was switched to adalimumab. On follow-up, the skin lesions had regressed with reduced flaking, but had not fully resolved. A written informed consent was obtained from the patient.

Case 2- A 45-year-old female patient monitored for psoriatic arthritis began anti-TNF (etanercept) treatment. At the same time, she used 15 mg/week subcutaneous methotrexate. In the second month of etanercept treatment, the patient applied to the clinic with a complaint of skin reaction developing on the palms of both hands and soles of the feet. With no active psoriatic lesions in the last three years and a history of plaque psoriasis, the patient’s skin reaction had been present for nearly one week. Painful pustular lesions on erythematous backdrop were observed on both hands and feet, with cracks on the soles of the feet. There were no abnormal results in complete blood count, kidney or liver functions, or acute phases. The patient consulted with the dermatology clinic and was assessed as having palmoplantar pustular psoriasis (Figure 1). Topical fusidic acid + betamethasone were begun. The patient was recommended to stop smoking and etanercept treatment continued. Assessed one week later, there was no reduction in lesions with topical treatment and the patient stopped anti-TNF treatment due to severity of lesions. With increasing skin complaints, the patient was begun on cyclosporin and monitored. A written informed consent was obtained from the patient. 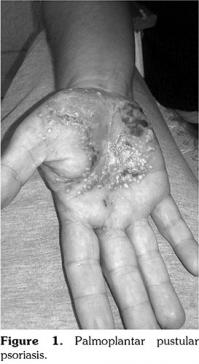 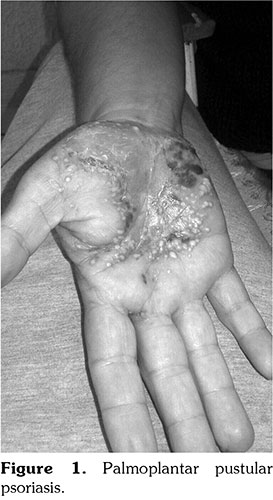 Case 3- A 33-year-old male patient monitored for 12 years for AS had used anti-TNF (400 mg infliximab total dose, 5 mg/kg) once every six weeks for nine years. With no clinical complaint of pain involvement, the patient had pustular lesions and desquamation on erythematous background on the soles of the feet and palms of the hands for the last two-and-a-half years. With one-time history of uveitis, the patient had no history of peripheral arthritis, psoriasis or IBD. Family history revealed that his father had a history of psoriasis. Examination of the patient revealed pustular lesions on both feet and hands (lateral palmar and plantar areas). Nails had no appearance of onycholysis, pitting, or oil stains. Anteroposterior pelvic radiograph showed bilateral stage III sacroiliitis. Foot radiograph and lumbar radiographs showed no syndesmophytes or enthesitis. His complete blood cell count, kidney and liver functions, and acute phases were normal. The patient consulted with dermatology for psoriasis. Treatment was arranged with diagnosis of tinea pedis. With no response to treatment, the patient consulted again and pustular bacteria were identified in biopsies taken from the plantar region of the right and left feet (Figure 2). Topical calcipotriol-betamethasone were begun. As the patient’s skin lesions were minor, existing infliximab treatment continued. A written informed consent was obtained from the patient. 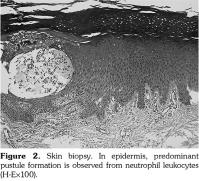 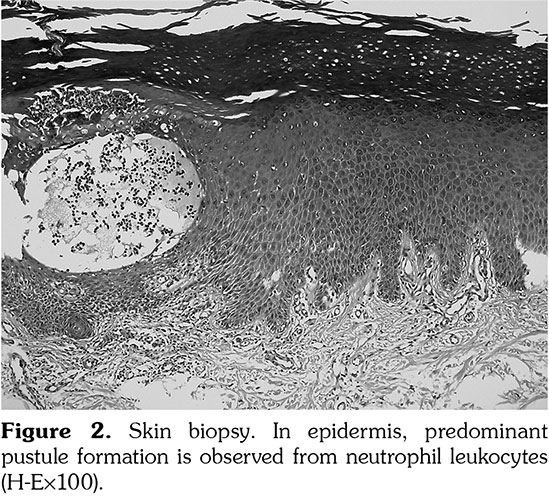 Case 4- A 30-year-old male patient monitored for AS with high disease activity in spite of nonsteroidal anti-inflammatory drug (NSAID) use began anti-TNF (golimumab) treatment. In the third month of treatment (by injection), the patient had widespread skin lesions in accordance with pustular psoriasis dominantly on the hands and soles of the feet (Figure 3). There was no history of psoriasis in the patient’s history or family history. Physical examination showed pustular lesions with occasional flaking on erythematous background dominantly on the hands and feet. There were nail changes too (Figure 4). Radiological investigation found bilateral stage IV sacroiliitis. Beginning topical treatment, the patient consulted with dermatology due to the widespread skin lesions and anti-TNF treatment was stopped with the beginning of 10 mg/week methotrexate + 150 mg/day cyclosporin. With continuing lesions after three months of oral and topical treatment, the patient began adalimumab by joint decision with the dermatology clinic. With an increase in skin lesions after the first injection, the patient stopped anti-TNF treatment. The patient continues methotrexate and cyclosporin treatment for skin lesions. A written informed consent was obtained from the patient. 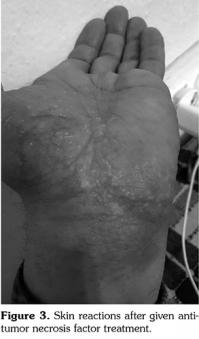 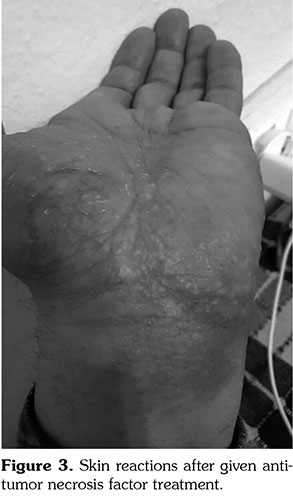 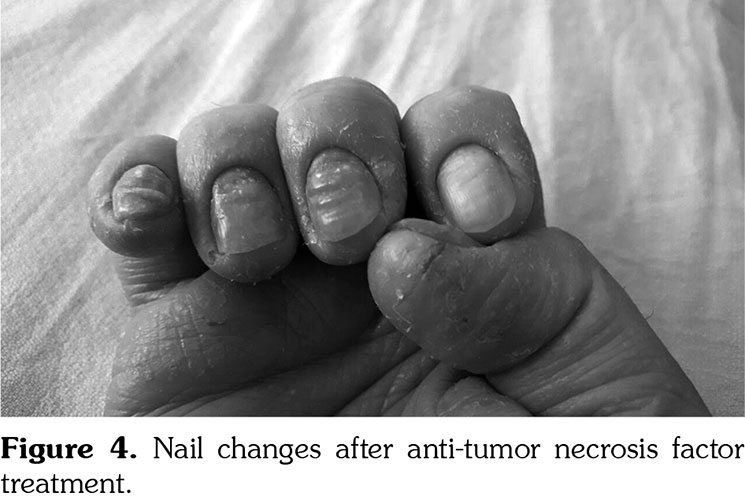 Case 5- A 57-year-old female patient with psoriasis vulgaris had no regression of skin lesions with cyclosporin, methotrexate and acitretin, so dermatology began anti-TNF (infliximab). There was no history of psoriasis or other skin disease in the family history. With no clinical change after the first infusion, the patient had an increase in skin lesions after the second infusion. The lesions were in the form of pustular psoriasis particularly on the hands and feet. There were cracks in the soles of both feet. Fifteen days after infusion, the patient applied with pain sensitivity, redness and increased heat in the heel and malleolus of the left foot and was evaluated by arthritis and cellulite suspicion. With normal complete blood cell count, the patient had high acute phases. Radiography excluded fracture in the patient with calcification of the epin calcaneus and Achilles tendon. With a prediagnosis of cellulitis, the patient began oral antibiotics and NSAID and complaints regressed. The patient’s third infliximab infusion was given by dermatology. However, with no improvement in skin lesions, the patient stopped anti-TNF treatment and began topical+cyclosporin treatment. A written informed consent was obtained from the patient.

Side effects such as worsening of existing psoriasis or development of new psoriatic lesions have been reported for all anti-TNF agents in use (infliximab, adalimumab, etanercept, golimumab and certolizumab pegol). As a result, it is accepted that this is a class effect of medications causing TNF blockage, rather than a medication-specific side effect. This type of side effect observed in this medication group used effectively for treatment of psoriasis is assessed as a paradoxical side effect. Though there is no clear opinion related to pathogenesis, several hypotheses have been proposed indicating that a disrupted balance between interferon-alpha (IFN-α) and TNF-α may cause this paradoxical side effect.(2) One of these theories is that in genetically susceptible individuals, the cytokine balance becomes disrupted after TNF-α blockage and then uncontrolled production of IFN-α occurs in plasmacytoid dendritic cells. When biopsies with spontaneous psoriasis lesions are compared, TNF antagonist induced psoriatic plaques have increased IFN-α in dermal vascularity with perivascular lymphocytic infiltration.(3,4) It is not correct to explain psoriatic skin lesions developing after anti-TNF treatment as only due to increased IFN-α and reduced TNF-α as pustular psoriatic lesions developed or existing psoriasis worsened in patients treated with rituximab, anakinra and efalizumab. The related case presentations mentioned the efficacy of cytokines playing a key role in inflammation like interleukin (IL)-17 and IL-22 in the pathogenesis.(5,6)

Worsening of existing psoriasis or new development is accepted to be independent of the length of use of anti-TNF treatment. Additionally, there is no difference observed in terms of age and sex.(7) An assessment of our cases in terms of age and sex revealed three males and two females, with a mean age of approximately 40 years. Skin reactions occurred in the first three months in three of our patients, while in the other two, skin lesions developed after longer periods. Lesion distribution in patients with skin problems in the early period was broader and lesions were more severe. Though psoriasis occurring after anti-TNF use is well defined in the spondyloarthropathy group of diseases, it has been reported with RA. A study by British Society for Rheumatology (BSR) in 2009 followed 9,826 RA patients using anti-TNF and 2,880 using conventional disease- modifying antirheumatic drugs (DMARDs) over six years and encountered 25 psoriasis cases in the group receiving anti-TNF therapy with no psoriasis cases observed in the group receiving conventional DMARD treatment. Again, the same study stated that the incidence may be slightly higher in patients receiving adalimumab compared to etanercept.(8) When our patients were evaluated in terms of rheumatic diseases requiring anti- TNF treatment, three had AS, one had psoriatic arthritis and one had psoriasis vulgaris.

To date, we have not encountered this type of paradoxical side effect in patients given anti-TNF treatments for reasons other than spondyloarthropathy group of diseases. In terms of treatment of our patients with psoriasis developing or increasing lesions after anti-TNF treatment, three were using infliximab, one was using golimumab and one was using etanercept.

Three of our five patients had pustular psoriasis after anti-TNF therapy. Paradoxically, TNF-α inhibitors have been reported with the exacerbation or the new development of psoriatic lesions, the majority of which are cases experiencing pustular psoriasis.(7) Biopsy samples of TNF-α associated psoriatic lesions are histologically identical to those of patients with idiopathic psoriasis, implying that the mechanism of action of these processes may be similar or identical.(7)

Such side effect of treatment given to control the rheumatic disease leaves both the patient and the doctor in a difficult situation. Disease management is easier in patients with previous psoriasis since they are familiar with this situation; however, it is more difficult for newly developing cases to accept the disease. The severe progression of this paradoxical side effect of anti-TNF treatments, as in our cases 2, 4 and 5, may prevent the control of the primary rheumatic diseases in addition to the occurrence of a secondary inflammatory disease requiring treatment. Additionally, development of widespread skin lesions as in our immunosuppressive patients disrupts the barrier properties of the skin and leaves the patient open to infection. We hope that the experiences shared in our case presentations assist in facilitating treatment for these cases and increase awareness of physicians to inform their patients accordingly.