In recent years, more attention has been paid to myeloid-derived suppressor cells (MDSCs) and their importance in cancer and other illnesses. Increasing numbers of studies suggest that the expansion of these regulatory cells may be a common response to various forms of inflammation.(1)

Myeloid-derived suppressor cells are defined as heterogeneous cell population and they include myeloid progenitor and immature myeloid cells. In steady state, MDSCs reside mostly in bone marrow, but in presence of various pathological conditions, they can expand and be detected in peripheral lymphoid and cancerous tissues, blood stream, the spleen and inflammatory sites.(2,3) Due to their heterogeneity both in morphology and function, MDSCs lack one specific marker of identification.(4)

In murine models, researchers characterize MDSCs by the expression of granulocyte- differentiation antigen (Gr-1) and Crohn’s disease (CD)11b markers which represent a mixture of immature myeloid cells, myeloid progenitor cells, monocytes-macrophages, immature granulocytes and dendritic cells.(5,6) Both murine and human MDSCs can be subdivided into more monocytic and more granulocytic subtypes. Human MDSCs are divided into CD14+ monocytic and CD15+ granulocytic subtypes. Both of the subtypes express myeloid specific markers CD11b and CD33, but lack the expression of human leukocyte antigen-antigen D related (HLA-DR) and other mature myeloid cells markers.(4)

A majority of research on MDSCs is performed in terms of cancer; however, it is already known that MDSCs are involved in various autoimmune diseases such as systemic lupus erythematosus,(7) autoimmune type 1 diabetes,(8) autoimmune hepatitis,(9) and also in viral,(10) bacterial(11) and parasitic(12) infections, sepsis,(13) inflammation(14) or other pathological conditions.(15) There are limited data available concerning MDSCs in case of rheumatoid arthritis (RA) and no data in case of Sjögren’s syndrome (SS). Fujii et al.(16) showed that in a collagen-induced arthritis (CIA) mouse model, MDSC lowered the number of T helper cells and suppressed the progression of CIA. The findings of MDSCs as immune response suppressors, functioning directly or indirectly through the induction of regulatory T cells, are summarized in a review article of Greten et al.(4) Therefore, in this study, we aimed to investigate the distribution of MDSCs in patients with primary or secondary SS or RA in order to better understand MDSCs significance in the pathogenesis of these autoimmune diseases.

Patients who participated in the study were recruited from the Rheumatology Centre of Vilnius University Hospital Santaros Klinikos between September 2014 and December 2016. Of the patients included, 25 (1 male, 24 females; mean age 56 years; range 32 to 77 years) had primary Sjögren’s syndrome (pSS), 17 (1 male, 16 females; mean age 60 years; range 49 to 73 years) had secondary Sjögren’s syndrome (sSS) due to RA, 23 (5 males, 18 females; mean age 57 years; range 41 to 81 years) had RA and 23 (23 females as control group; mean age 59 years; range 44 to 92 years) had nonautoimmune sicca syndrome (nSS). The diagnoses of pSS and sSS were based on the criteria defined by the American-European Consensus Group criteria for SS.(17) RA was diagnosed according to 2010 American College of Rheumatology (ACR)/European League Against Rheumatism (EULAR) criteria for RA.(18) None of the patients in the control group met the SS classification criteria and they were classified as patients with nSS. All study participants underwent extensive serological evaluation (Table 1). None of the patients was on immunosuppressive medications at the time of the study. A written informed consent was obtained from each subject. The study protocol was approved by the Ethics Committee for Biomedical Research in Vilnius region (2014-05-20, No. 158200-14-733-248). The study was conducted in accordance with the principles of the Declaration of Helsinki. 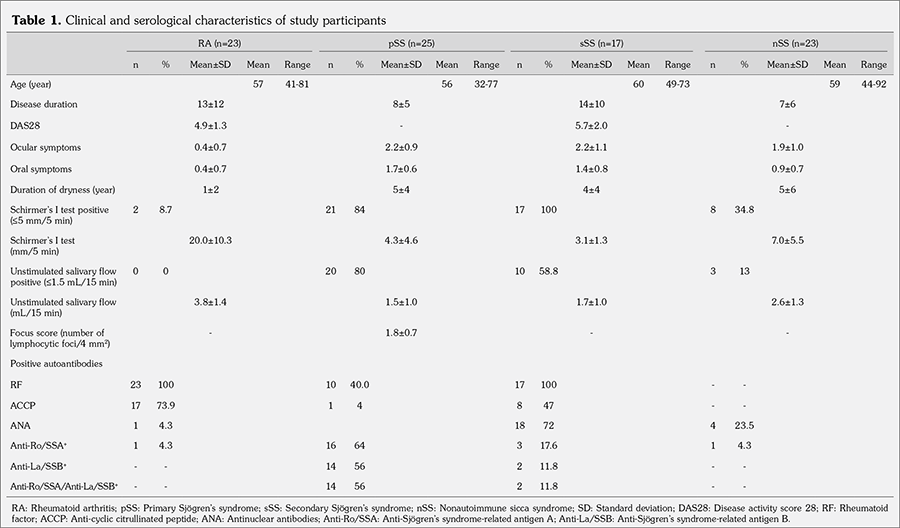 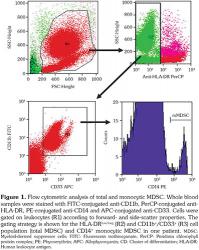 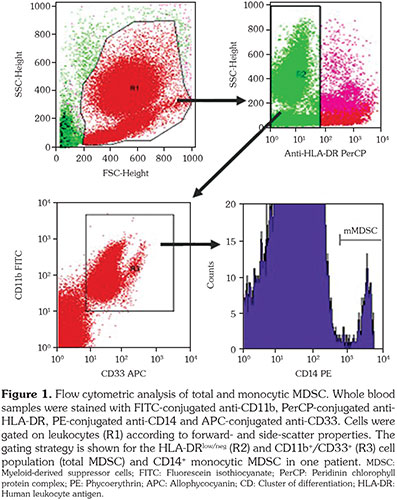 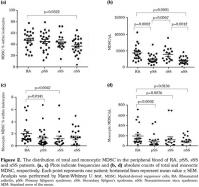 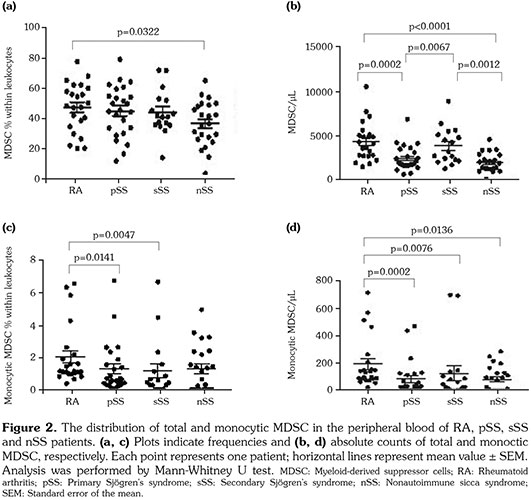 We also analyzed the distribution of both total and mMDSCs in anti-Ro/SSA and anti-La/SSB positive patients (Table 1), instead of all study participants in pSS group. Even though the p values changed slightly (Figure 3a-d), no additional significant changes were observed. 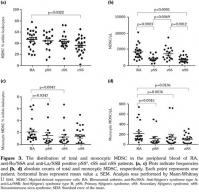 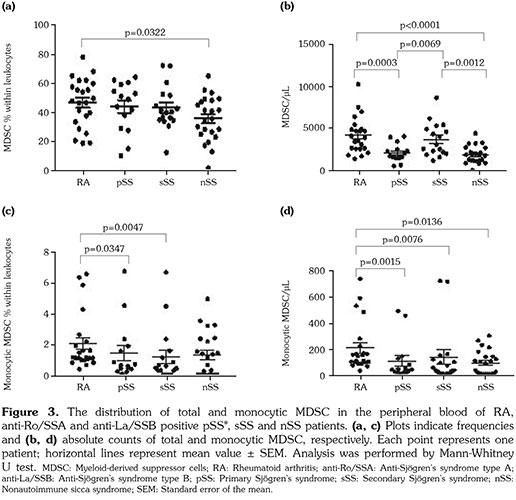 In our previous study, we analyzed plasmacytoid (pDC) and conventional dendritic cells (cDC), cytotoxic T lymphocytes (CTL), natural killer (NK) and natural killer T (NKT) cells(18) in peripheral blood of the same study subjects as in this study. Consequently, we recalculated correlations and established associations between MDSCs and other peripheral blood cell populations. For this purpose, only the same patient data as for MDSC analysis were selected and correlations were calculated both in frequencies and absolute counts.

The bone marrow is stimulated to release MDSCs into the bloodstream to protect the host from harmful excessive immune stimulation in case of acute or chronic infection, and to limit the formation of an autoimmune response to tissue antigens released during injury. The role and molecular mechanisms of MDSCs in human autoimmune diseases are complicated and still unclear. Even though most MDSC studies are carried out in murine models,(9,20,21) the number of human MDSC studies is increasing.(22,23) It is already known that MDSCs can inhibit functions of various T cell populations in many ways. Zhu et al.(24) demonstrated that in experimental autoimmune encephalomyelitis model, mMDSCs exhibit strong suppressive effect on activated T cells and participate in T cell inhibition by producing nitric oxide. Nitric oxide production by MDSCs result in nitrosylation of cysteine residues, which destabilize messenger ribonucleic acid, thus preventing the production of cytokines necessary for T cell proliferation.(25,26)

There is limited research on the distribution of MDSCs in peripheral blood of patients with autoimmune diseases. In some cases, authors report that in animal models, MDSCs decrease the severity of autoimmune processes,(27,28) while other studies show that MDSCs are associated with a worse prognosis of the disease.(29,30) Jiao et al.(23) determined that in RA patients, circulating MDSC population increased significantly compared to healthy individuals and these findings coincide with our results. Furthermore, they established a negative correlation between MDSCs and Th17 cells, which confirms the association between them. We have also calculated the correlations between MDSCs and other peripheral blood cell populations and found that these cells correlate with cDC and a few subpopulations of CTL, which also confirms the association between MDSCs and T cells.

For a long time, it has been assumed that T cells play the main role in SS pathogenesis; however, more recent research claim that B cells are not only crucial in SS pathogenesis, but are also the main cells participating in the development of the disease.(31) It is also known that there are almost five times more B cells than T cells in salivary gland infiltrate of pSS patients.(32) The fact that B cells play the main role in pSS disease may be the reason why we observed significantly increased frequency of total MDSCs only in RA and a significant increase of absolute count of total MDSCs in RA and sSS study groups. In pSS group, the absolute count of both total and mMDSCs was almost the same as in our control group. It is known that anti-Ro/SSA and anti-La/SSB autoantibodies are associated with a more severe course of the disease: earlier onset, decreased salivary flow, more intense eye symptoms, worse Schirmer’s test etc.(33,34) However, after narrowing down pSS group to only anti-Ro/SSA and anti-La/SSB positive patients, results did not change. Nevertheless, we have established a correlation between mMDSC and cDC, as well as a CTL subtype.

Secondary Sjögren’s syndrome is a common manifestation in patients with RA, its prevalence varying from 4 to 50%.(35) This subgroup of patients has distinct clinical, immunological and genetic profiles.(36) Observation studies indicate that RA and sSS have different outcomes and patients with sSS have two-fold higher risk of non-Hodgkin's lymphoma and higher mortality rate.(37) In our study, we have determined that total MDSCs in sSS increased, compared to pSS and nSS and were comparable to RA; however, mMDSCs in sSS increased only slightly and were comparable to pSS and nSS. It is known that granulocytic and monocytic MDSCs have distinct molecular properties and distinct gene expression profiles but also opposing effects on tumor cells.(38) This can also be assumed in terms of autoimmune diseases. Our presumption is that granulocytic MDSCs play a more significant role in both RA and sSS. Moreover, in this group, we established correlations between total and mMDSCs and different CTL subpopulations.

One of the downfalls of our study is that we only measured the distribution of MDSCs and mMDSCs in RA, pSS and sSS study groups. We observed increased frequency of total MDSCs in all study groups compared to control group, yet the frequency of mMDSCs increased only in RA group. Due to the differences between total and mMDSC populations, further and more extensive studies of MDSC subpopulations should be conducted, distinguishing granulocytic CD15+ MDSCs and other subpopulations. Furthermore, larger sample sizes are required. Different factors (prostaglandins, cyclooxygenase-2, interleukin 6, granulocyte-macrophage colony-stimulating factor, macrophage colony-stimulating factor, interferon gamma, transforming growth factor beta and tumor necrosis factor) are responsible for MDSC expansion, proliferation and inhibition of differentiation into mature cells.(39-42) Assessment of serum factor levels of study patients might give us an insight as to why there is such a difference in MDSC distribution between these two autoimmune diseases (RA and pSS).

In conclusion, we have determined that the most prominent increase of both total and mMDSCs was evident in RA and sSS groups, which leads us to believe that MDSCs are associated with rheumatic processes. Furthermore, to the best of our knowledge, this is the first study to analyze the distribution of MDSCs in peripheral blood of pSS and sSS patients and to compare the results with RA.

This work was supported by a grant with No. MIP- 013/2014 from the Research Council of Lithuania and by State Research Institute Centre for Innovative Medicine.