Objectives: This study aims to evaluate the antioxidant effects of epigallocatechin-3-gallate (EGCG) in a bleomycin (BLM)-induced scleroderma model.
Materials and methods: Thirty-two healthy female Balb-c mice (6-8-week-old; weighing 22±5 g) were used in this study. The mice were randomly divided into four groups: control (n=8), BLM (n=8), BLM+EGCG (n=8), and EGCG (n=8). Skin tissue specimens were collected at the end of the experiments. Histopathological examinations of skin tissues were performed. Skin samples were assessed for total superoxide dismutase activity and malondialdehyde content. The phosphorylation of p-38 mitogen-activated protein kinase and Akt protein (the serine-threonine protein kinase encoded by the AKT), as well as the nuclear factor-kappa B levels, were analyzed by western blotting.
Results: Epigallocatechin-3-gallate-treated groups were observed to have reduced connective tissue fibrosis in the dermis area using Masson’s trichrome staining method. Pp-38 and nuclear factor-kappa B were found to decrease significantly in the BLM + EGCG group compared with the BLM group. Parallel to these findings, phosphorylated Akt protein was found to increase in the BLM + EGCG group compared with the BLM group. Superoxide dismutase activity was increased in the EGCG group and content of malondialdehyde level was decreased in EGCG groups.
Conclusion: The results of the present study demonstrated that EGCG represses pp-38 and nuclear factor-kappa B signaling pathways, exerting a protective effect for scleroderma through its anti-oxidative role.

Systemic sclerosis or scleroderma (SSc) is an autoimmune connective tissue disease.(1) SSc is characterized by fibrosis of skin and internal organs. The cause of SSc is unknown and pathogenesis is unclear; it is characterized by overproduction of excessive extracellular matrix (ECM).(2) In this disease, normal tissue architecture is broken and replaced with collagen- rich, stiff connective tissue.(3) Also, SSc is a very rare disease in the population and shows three pathological features: injuries to vascular endothelial cells, imbalanced immune system, and ECM accumulation.(1) As in other autoimmune diseases, females are at higher risk than males.(3-5) In this disease, oxidative stress may play a role for pathogenesis.(6-8) Recent studies showed a relationship between oxidative/antioxidative markers and SSc.(9-12)

Animal models are used to provide clues and therapeutic interventions for human diseases. Bleomycin (BLM) is often used as an anti- tumor agent for several cancer types and is originally isolated from the fungus Streptomyces verticillus.(13) Recent studies showed that BLM upregulates collagen messenger ribonucleic acid expression in human lung or dermal fibroblasts in vivo models like a normal SSc phenotype.(14,15) Yamamoto et al.(16-21) established a mice model for SSc by local treatment by BLM subcutaneous (sc) injections during 21 days.(16-21) Concerning the in vivo research, the BLM-induced experimental SSc mouse is the most used model for studying SSc.(22)

Overproduction of reactive oxygen species (ROS) is known to induce tissue damage and cell death, which could lead to several physiological and pathological processes. Studies have shown that ROS generation occurs in fibrosis. ROS, such as superoxide anions, hydrogen peroxides, and hydroxyl radicals have been demonstrated to be an important mediator of BLM-induced fibrosis.(23-25) In SSc, tumor necrosis factor alpha (TNF-α) signaling increases fibroblast proliferation, collagen synthesis and ROS production.(26,27) This situation also leads to suppress the expression of antioxidant enzymes such as superoxide dismutase (SOD).(27) The accumulation of matrix proteins is increased by both TNF-α signaling and ROS production.(27) Besides, there are studies showing that free radicals cause immune system activation and cytokine production and stimulate extracellular matrix elements and the amount of collagen.(28-30)

Epigallocatechin-3-gallate (EGCG), the most abundant catechin, is the major effective component of green tea and has been shown to have beneficial health effects on skin.(31,32) In liver fibrosis, EGCG was shown to inhibit proliferation of fibroblasts, reducing collagen deposition, and upregulating the mitochondrial respiratory chain.(33) EGCG has been shown to play protective role against breast cancer(34-36) colon and prostate cancer.(37) Besides, it has been promising as a source of new molecular therapies. The possible role of EGCG in oxidative stress has attracted attention over the last few years. However, the role of EGCG on SSc focusing on the pathways involving oxidative stress has not been investigated. In this study, we aimed to evaluate the antioxidant effects of EGCG in a BLM-induced SSc model.

Experiments were performed on dermal tissues obtained from previous study with approval of the Animal Care and Use Committee of the Dokuz Eylul University (Protocol No: 79/2012). This study was conducted at Dokuz Eylul University between April 2015 and May 2015. Skin fibrosis was induced in 32 pathogen-free female Balb/c mice (6-8-week-old; weighing 20-22 g) (Dokuz Eylul University, Department of Experimental Animals) by local injection of BLM for 21 days.(16,20,38) The animals were kept under standard animal laboratory conditions: temperature of 20-22°C, humidity of 55-60%, photoperiod of 12:12 hour light: dark cycle. They had free access to standard laboratory feed and water, according to the study protocol. All methods including the euthanasia procedure were conducted in accordance with Guide for Care and Use of Laboratory Animals, Institute for Laboratory Animal Research, National Institute of Health (NIH). The study protocol was reviewed and approved by Dokuz Eylul University Ethics Committee for Animal Research (Protocol No: 1/2018).

Bleomycin was used for SSc model (Onko Koçsel, ‹stanbul, Turkey). EGCG (Sigma-Aldrich, Dorset, UK) solution was prepared as 20 mg/kg in saline as reported earlier.(39) The mice were randomly divided into four groups of eight animals each, as follows:

The MDA assay was based on the condensation of one molecule of MDA with two molecules of thiobarbituric acid (TBA) in the presence of reduced agents. The TBA + MDA complex was analyzed by high-performance liquid chromatography system. The MDA levels were expressed as μmol/g protein.

For the SOD assay, homogenates were centrifuged at 11000 •g for 10 minutes. The supernatant was used for determination of SOD enzyme activity. SOD activity was analyzed by spectrophotometric assay kit (Cayman Chemical Company, Inc., Ann Arbor, MI, USA) and performed according to the manufacturer’s instructions. This assay utilizes a tetrazolium salt for the detection of superoxide radicals generated by xanthine oxidase and hypoxanthine. The reaction was monitored at 440nm using a plate reader (Synergy HT, BioTek Instrument Inc., Winooski, USA). One unit (U) of SOD is defined as the amount of enzyme needed to exhibit 50% dismutation of the superoxide radical. SOD activity data were expressed as U/mg protein.

Masson’s trichrome staining was performed and the histological examination of the skin tissues from the mice is shown in Figure 1. The dermal thicknesses in the BLM + EGCG injected mice were significantly lower than in the BLM injected mice respectively (p<0.05, Figure 1). 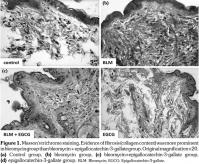 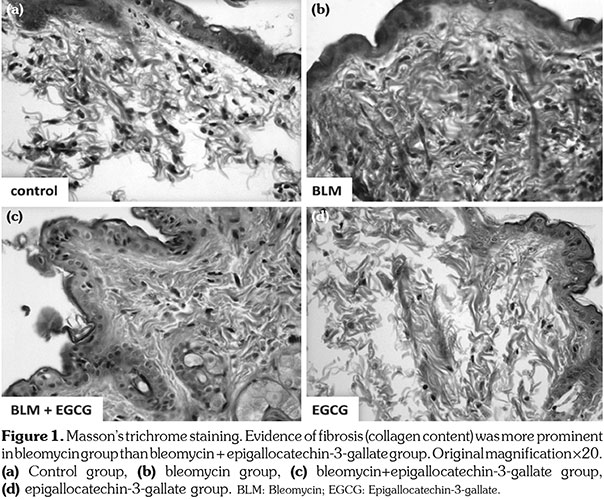 The western blotting analysis showed that EGCG increased the phosphorylation of Akt in the EGCG group compared with the control and BLM groups significantly (Figure 3, p<0.05). 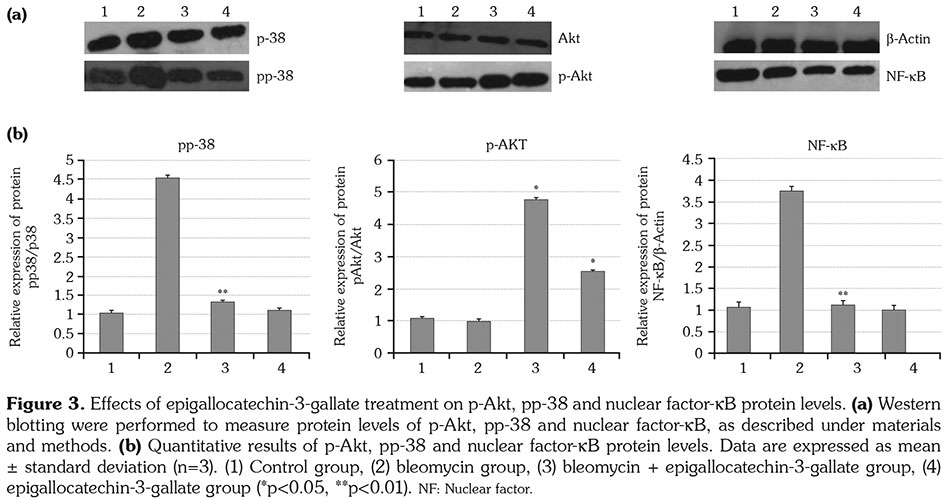 Scleroderma is a systemic autoimmune disease of unknown etiology and pathogenesis. It is characterized by progressive tissue fibrosis. Fibrosis, characterized by excessive accumulation of the extracellular matrix, is a clinical hallmark of many disorders such as SSc. Oxidative stress and tissue inflammation are the underlying events that accompany the development of fibrosis in SSc.(4)

A study investigated several dietary antioxidants in nature as therapeutic agents.(42) and suggested that different antioxidants showed different defense mechanisms, and thus they possessed different potential therapeutic treatments. Authors reported that EGCG, one of the most active components of tea polyphenols, acts as antioxidant by scavenging reactive oxygen species. The significant antioxidant effect of EGCG is sweeping the free radicals. EGCG can act as electron traps to scavenge free radicals or inhibit the formation of ROS such as oxide and peroxynitrite.(43) However, the authors did not study role of EGCG on the signaling pathways in SSc.

In our study, SOD activity was decreased and MDA content was increased in the experimental group (Figure 2). SOD enzyme activity and MDA levels are important indicators of oxidative stress and respond to induced oxidative stress.(44)

Epigallocatechin-3-gallate has also been shown by some studies to directly inhibit several molecular targets and regulate multiple signal transduction pathways such as MAPKs (p-38) and the redox-sensitive transcription factor (NF-κB) in the cardiovascular and cancer studies.(45-47) Akt signaling pathway plays an important role in cell growth, survival and motility. Several studies have also highlighted mechanisms by which EGCG could exert anti-fibrotic effects such as blocking the activation of NF-κB.(48,49) NF-κB signaling pathway is activated by both oxidative stress and inflammatory factors and considered to be a prototypical pro-inflammatory signaling pathway for its role in the expression of other pro-inflammatory genes.(50) Dooley et al.(51) and Kim et al.(52) reported that EGCG reduces ROS, extracellular signal-regulated kinase 1/2 and c-Jun N-terminal kinase signaling pathways, as well as NF-κB activity.(51,52)

Our previous data indicated that EGCG can effectively inhibit collagen content and myofibroblasts and TNF beta signaling.(53) In this study, we suggest that the inhibitory effect of EGCG on fibrosis may be at least partly due to ROS inhibition.

In conclusion, we state that EGCG reduced the severity of fibrosis in an experimental animal model of SSc. The improved pathology occurred in association with lower concentrations of pro- fibrogenic factors, lipid peroxides, Akt, p-38 and NF-κB. This study presents novel data concerning the effect of EGCG on the oxidative state in a SSc model. In the future, these parameters may be investigated further for their possible role in the diagnosis and monitoring of SSc.