Peripheral Neuropathy Presenting as Myopathy That was Confused With Inflammatory Myositis

A 34-year-old female patient presented with sudden weakness and painful swelling of the left lower extremity. She had also developed multiple bullae that progressed to diffuse swelling (Figure 1a). Laboratory tests resulted in lactate dehydrogenase 881 U/L, aspartate transaminase 264 U/L, alanine transaminase 102 U/L, creatine kinase 23,535 U/L, myoglobin >3,000 (normal 27-75) ng/UL, and aldolase 122 U/L. Antinuclear, anti-Jo antibody, cytomegalovirus, and Epstein-Barr virus were all negative. Magnetic resonance imaging demonstrated general edema and changes in signal intensity around the posterior segment muscles including the semitendinosus and adductor magnus muscles of the left thigh (Figure 2a, b), but it showed no change in the signal intensity of the left calf muscle (Figure 2c). Initially, there were no specific findings of peripheral neuropathy on EMG or NCS. Despite improvement of bullae, edema, and returning to normal range of muscle enzyme after the glucocorticoid pulse therapy (methylprednisolone 250 mg/day for three days) (Figure 1b), the histological findings of the left semitendinosus muscle were nonspecific without interstitial lymphocyte infiltration (Figure 3). Although the patient could extend the left great toe, the left foot plantar flexion and dorsiflexion had not recovered completely. Ultimately, repeated EMG and NCS revealed decreased motor unit activation in the muscles innervated by the left peroneal and tibial nerves. The NCS revealed decreased amplitude, compared with the right side, and suggested a neurogenic condition (Tables 1 and 2). Seven months later, axonal regeneration and the motor unit activation were improved in the same muscles on EMG and NCS (Tables 1 and 2).

Figure 1. (a) At time of admission, bullae were observed on left foot, with largest measuring 3x4 cm. (b) After one week of glucocorticoid treatment, bullae had revolved almost completely.
× 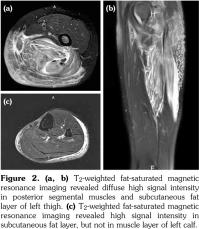 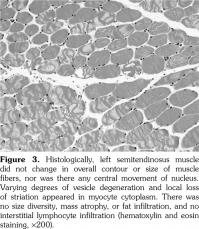 Figure 3. Histologically, left semitendinosus muscle did not change in overall contour or size of muscle fibers, nor was there any central movement of nucleus. Varying degrees of vesicle degeneration and local loss of striation appeared in myocyte cytoplasm. There was no size diversity, mass atrophy, or fat infiltration, and no interstitial lymphocyte infiltration (hematoxylin and eosin staining, ¥200).
× 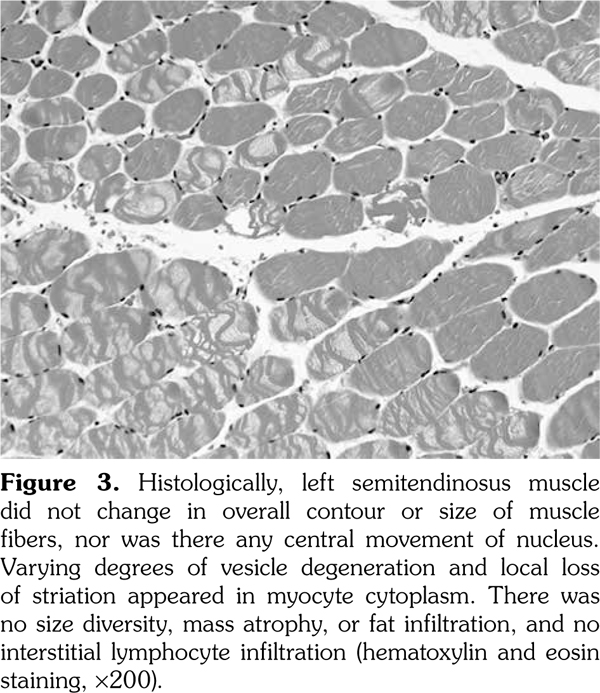 Table 1. There were no signs suggestive of myopathy or neuropathy on needle electromyography at the time of admission. However, 3 weeks after admission, the needle electromyography findings revealed decreased motor unit activation in the muscles innervated by the peroneal and tibial nerves (the external hallucis longus, tibialis anterior, tibialis posterior, and peroneus longus muscles). After treatment, axonal degeneration and regeneration were observed and the motor unit activation was improved in the same muscles.
×

Myopathy and neuropathy are generally considered to be different, although concomitant myopathy and neuropathy are rarely reported, called neuromyositis.(4) EMG and NCS are useful tools for identifying neuromyositis.(5) Muscle and nerve biopsies may also be helpful for diagnosing neuromyositis, but further studies are needed to establish the typical histologic findings. Myopathy is rarely accompanied by bullae. If the skin cells are damaged by various causes and their structural function is affected, the cells separate from each other and fluids build up between the separated cells, causing bullae.(6,7) In our case, a similar mechanism was suggested that the rapid progression of myopathy accompanied by neuropathy caused cutaneous edema and dermoepidermal disruption, resulting in bullae.

Although EMG and NCS are useful tests for distinguishing myopathy and neuropathy, the interpretation of the results may vary depending on the time of the tests. Typically, NCS and EMG reveal pathological findings beginning a few days after the onset of symptoms, but they may appear normal for up to three weeks. Therefore, if unexplained abnormal sensation and disability occur, it is appropriate to repeat EMG and NCS.

This article was supported by the Soonchunhyang University fund.