Behçet's disease is a multisystem inflammatory disorder. Cardiovascular involvement is rare but may present with various manifestations, resulting in high mortality. In this article, we report a young male who had chest pain accompanied by systemic involvement, and was diagnosed of Behçet's disease with serious pulmonary artery and coronary thrombosis by systemic check-up. Finally, the patient was successfully treated with a combination of prednisone and immunosuppressive agents instead of surgery. To our knowledge, this is the first report of concurrent coronary thrombosis and pulmonary artery thrombosis in Behçet's disease patients.

Behçet's disease (BD) is a multisystem condition of unknown etiology, which is characterized by orogenital ulceration and eye disease. It mainly occurs in countries along the Old Silk Road, with male dominance.(1) BD mostly affects the veins and is prone to thrombosis formation. Pulmonary artery aneurysms or in situ thrombosis are relatively common arterial involvements.(2) Cardiovascular involvement is extremely rare but may present with various manifestations, resulting in high mortality.(3) In this article, we report a case of BD with pulmonary artery thrombosis and coronary thrombosis, which was successfully treated with immunosuppressive agents instead of surgery.

A 22-year-old male patient was admitted to our department in 2013. He had a history of recurrent erythema nodosum in lower limbs for over a two-year period. For the past one year, the patient complained of recurrent oral ulcer and arthralgia. For the past four months, he experienced low grade fever. In addition to fever, facial acneiform lesions were also noticed. Meanwhile, he also suffered chest pain which radiated to the left shoulder back. Physical examinations showed acne-like rashes over face and back, and erythema nodosum in limbs. Multiple minor ulcers were present on the buccal mucosa. Laboratory investigation revealed hemoglobin of 106 g/L, erythrocyte sedimentation rate of 120 mm/ hour, and C-reactive protein of 152 mg/L. Procalcitonin, myocardial enzymes, troponin I, antinuclear antibody and other autoantibodies were all negative. Bone marrow morphology showed poisoning changes. Electrocardiogram demonstrated lower ST segment on V2-V6 and T wave inversion on the V4-V6 lead. Then, the patient received coronary angiography that showed multiple coronary thrombi, and the stenosis reached about 90% (Figure 1a) at the root of the pulmonary artery. Pulmonary computed tomography angiography was also performed, which showed filling defects at the root of pulmonary main lobe arteries (Figure 1b). At the same time, positive pathergy test appeared on the site of bone marrow puncture. According to the International Criteria of BD(4) the patient was diagnosed as BD with oral ulcers, skin lesions, positive pathergy test and cardiovascular involvement. He was given immunosuppressive therapy, which covered oral prednisone 40 mg daily along with cyclophosphamide 500 mg every two weeks. After a two-month treatment, coronary angiography and pulmonary computed tomography angiography revealed that thrombi obviously shrunk (Figure 2). The dosage of prednisone and cyclophosphamide were tapered gradually. To date, the coronary and pulmonary artery thrombosis have regressed without recurrence for nearly four years. A written informed consent was obtained from the patient. 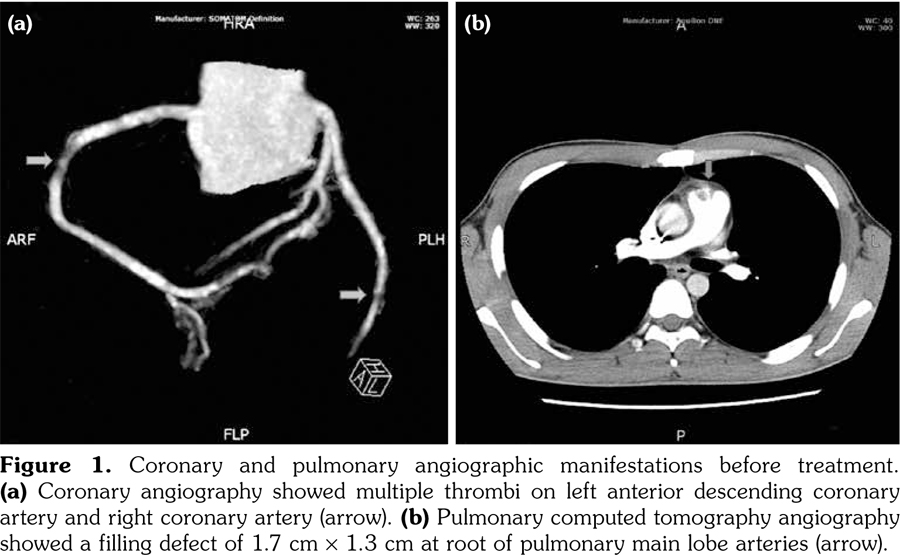 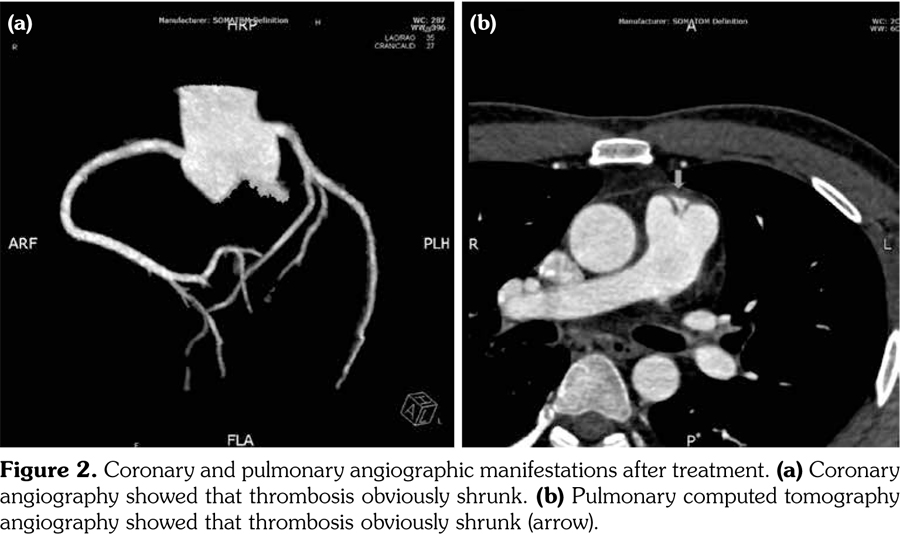 Behçet's disease is a multisystem inflammatory disorder characterized by remitting relapse episodes of oral ulcers, genital ulcers, skin lesions and ocular lesions. Additionally, cardiovascular, neurological, gastrointestinal and musculoskeletal systems may be involved.(1,5) The International Criteria for BD(4) has higher sensitivity, but care must be taken to exclude other diseases.(1) Our patient presented with systemic involvement, including skin lesions, oral ulcers, arthralgia, fever and chest pain, without drug use history, significant atherosclerotic risk factors and positive antibodies. BD diagnosis was made according to the International Criteria for BD.

There is no firm evidence to guide the management of cardiovascular disorder in BD. Immunosuppressive agents such as corticosteroids, azathioprine, and cyclophosphamide are recommended for the management of thrombosis in BD by European League Against Rheumatism.(14) Infliximab is effective in patients who are irresponsive to immunosuppressants.(15) Anticoagulants might not reduce the risk of recurrent venous thrombosis,(16) in contrast may result in fatal bleeding, particularly when aneurysms are present. So, anticoagulants are not recommended.(14) The surgical treatment in BD is challenging due to the high relapse rate and mortality. When surgery is inevitable, one point must be taken into consideration: achieving low disease activity through aggressive immunosuppressive therapy prior to any surgical correction.(1,3,17) Our patient responded well to treatment with prednisone and cyclophosphamide without surgery.

In conclusion, coronary artery thrombosis and pulmonary artery thrombosis in BD are rare but may be severe. When young males have chest pain accompanied by systemic involvement, BD should be taken into account. Perfecting interrelated tests, e.g. echocardiography, computed tomography angiography, and coronary angiography are valuable for the diagnosis. Aggressive immunosuppressive therapy is the first-line treatment, and surgical treatment needs to be reconsidered. More research is needed to improve our understanding and support the current approach for the management of this syndrome.

The authors disclosed receipt of the following financial support for the research, authorship, and / or publication of this article: supported by research project No.81402993 of National Natural Science Foundation of China and research project No.2015zzts300 of the Graduate Project for Freedom to Explore in Central South University.