Juvenile idiopathic arthritis (JIA) is the most commonly seen rheumatic disease in childhood. The pathophysiology of JIA is based on chronic idiopathic synovitis characterized by synovial hyperplasia and inflammation.(1) The presence of antinuclear antibody, rheumatoid factor, and other antibodies supports the autoimmune process in the etiopathogenesis.(2)

Endocan is an endothelial cell-derived dermatan sulfate molecule that plays a key role in vascular inflammation.(4,5) Serum levels of endocan increase in inflammatory processes such as endothelial activation and neovascularization.(6) It has also been shown that serum endocan levels rise in inflammatory diseases such as inflammatory bowel disease (IBD) and Behçet’s disease.(7,8) Relationships between cardiovascular disease risk and serum endocan levels in patients with chronic diseases such as chronic kidney disease (CKD) and psoriasis have also been reported.(9,10) Therefore, in this study, we aimed to evaluate the levels of serum endocan in children with JIA.

The study was a two-center, cross-sectional and observational study conducted in Istanbul Medical Faculty and Cerrahpasa Medical Faculty Pediatric Rheumatology Outpatient Clinics between August 2015 and June 2016. Children with JIA who were under follow-up at these polyclinics for at least six months were reviewed for the study. A total of 67 patients with JIA (30 males, 37 females; mean age 10.4±4.9 years; range 2 to 18 years) were included in the study group after reviewing patients’ charts, drawing online patients’ records, and taking serum samples.

Institutional Review Board (Istanbul University Istanbul Medical Faculty Clinical Research Ethic Committee) approval was obtained for this study (No. 2015/1014). A written informed consent was obtained from the parent/guardian of each patient. The study was conducted in accordance with the principles of the Declaration of Helsinki.

The diagnosis of JIA was established according to International League of Associations for Rheumatology criteria.(11) Exclusion criteria were presence of acute infection (i.e. upper or lower respiratory tract infection, urinary tract infection, acute gastroenteritis) or a history of any other rheumatic disorders.

After recruiting the study group, a sex- and age-matched healthy control group of 39 children (16 males, 23 females; mean age 9.3±4.1 years; range 1 to 17 years) without any acute or chronic disease was included once obtaining a written informed consent from each parent/guardian.

All patients were introduced to the research by the pediatric rheumatologist who was responsible for recruitment. Childhood Health Assessment Questionnaire (CHAQ) scores, which measure functional ability in daily living activities, were calculated when patients answered the required questions.

Patients in the study group were divided into two groups according to the American College of Rheumatology provisional criteria for defining clinical inactive disease (absence of active arthritis, duration of morning stiffness of <15 minutes, and inflammatory biomarkers within normal limits).(12) Serum endocan levels were appropriately measured using a 2-box kit (Sunred

Demographic features of JIA patients and healthy controls were given in Table 1. According to the American College of Rheumatology provisional criteria for defining clinical inactive disease, 40% (n=27) of patients had clinically active and 60% (n=40) had inactive JIA. The most common subtype of JIA was the oligoarticular type (n=45; 67%), followed by the polyarticular type (n=14; 20%). The mean age at diagnosis was 7.4±4.6 years, and the mean disease duration was 3.1±2.8 years (Table 1). Twelve patients had comorbidities during the study (allergic rhinitis, osteoporosis, growth retardation, attention deficit hyperactivity disorder, cataract, gastroesophageal reflux, anemia, nephrotic syndrome, and diabetes mellitus). We also performed statistical analysis after removal of patients with comorbidities. Fifty-five percent of patients with active JIA had one joint with active arthritis, whereas the remainder had two or more joints with active inflammation. Regarding treatment, 10 patients did not take any medication, 18 patients were taking multi-drug therapy, and 39 patients were receiving monotherapy. 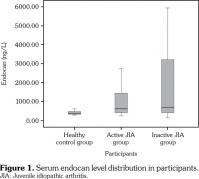 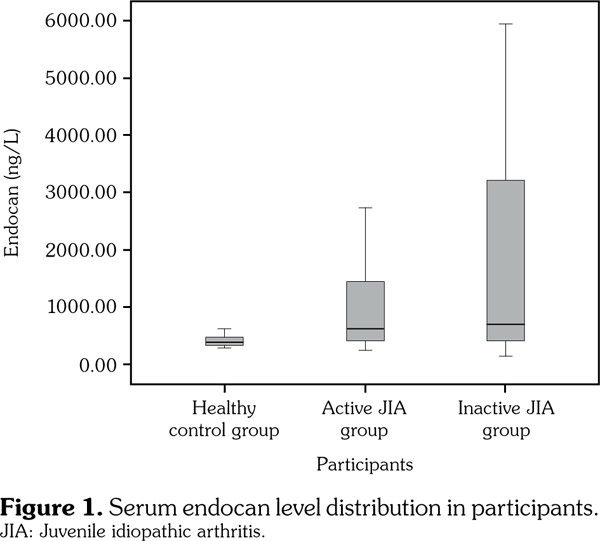 Although the level of serum endocan in patients with active JIA was low, there were no correlations with endocan levels and inflammatory biomarkers (CRP, ESR) and number of cases of active arthritis. These findings might mean that vascular inflammation and systemic inflammation may not be directly associated in JIA. The high level of serum endocan in the multiple-drug therapy group and monotherapy group rather than untreated group showed that suppressed systemic inflammation with drugs may not cover endothelial activation. In contrast to acute events (inflammatory biomarkers, active arthritis), chronic events (limitation of movement and functional capacity) were found to be more correlated with endothelial dysfunction (serum endocan).

Serum endocan level may not be associated with chronicity of the disease since it was irrelevant to the overall duration of disease. However, the negative correlation between serum endocan levels and the number of immobile joints gives a clue as to its predictive value in evaluating disability in the course of disease and its prognosis.

Patients with rheumatoid arthritis (RA) are known to carry two to five-fold higher risk for cardiovascular morbidities and mortality.(15) The most important factors in the pathogenesis of cardiovascular disease in patients with RA are endothelial dysfunction and vessel wall damage.(16) It has been speculated that cardiovascular complications seen in patients with JIA start with vascular damage years before symptoms present.(17) Accordingly, a recent study revealed that subclinical cardiovascular changes tended to present earlier, particularly in obese individuals.(18)

There is also evidence that serum endocan levels increase in synovial tissue of patients with RA, being stimulated particularly by adiponectin. Endocan causes angiogenesis, which is the explanatory mechanism of pannus formation.(19)

Our study has some limitations. The small sample size prevented us from making certain conclusions. The overall duration of disease being slightly short and the fact that patients were not evaluated for cardiovascular disease risk are other limitations of our study. In addition, it is difficult to draw conclusions about the possible etiology and its prognostic role in the course of the disease because the study had a cross- sectional design. Therefore, we cannot precisely interpret the data obtained from this study and cannot suggest that serum endocan might be considered as a diagnostic or a follow-up parameter in JIA.

In conclusion, our study showed that serum endocan levels are higher in patients with JIA compared with controls. The results of this study may indicate that patients with JIA can be evaluated in terms of endothelial dysfunction and increased cardiovascular disease risk in a more detailed manner. Multi-centered and large prospective studies may provide more accurate and substantial data on the etiology of JIA and its cardiovascular complications.

This study received a grant from the Istanbul University Scientific Research Project Unit (BAP) (no.56165).