Objectives: This study aims to compare the disease status of patients with active rheumatoid arthritis (RA) after treatment with tofacitinib or non- tumor necrosis factor (TNF) biologics.
Patients and methods: The study included a total of 50 RA patients (18 males, 32 females; mean age 68.3±1.3 years; range 42 to 92 years). We prospectively and randomly enrolled 25 patients for treatment with tofacitinib (Tofa group: 10 males, 15 females; mean age 68.3±2.0 years; range, 42 to 92 years) and 25 for treatment with non-TNF biologics (non-TNF group: 8 males, 17 females; mean age 68.3±1.7 years; range 51 to 92 years). Mean disease activity score 28 (DAS28), C-reactive protein (CRP), clinical disease activity index (CDAI), health assessment questionnaire (HAQ)-disability index (DI), and matrix metalloproteinase-3 values were recorded at baseline and at 4, 8, and 12 months.
Results: There was a significant difference in the percent changes of DAS28, CRP and CDAI at every time point versus baseline in both treatment groups. HAQ-DI was also significantly different at every time point in both groups except for at four months in the non-TNF group.
Conclusion: Tofacitinib was well tolerated in active RA patients and exerted effects comparable to those of non-TNF biologics.

The short-term efficacy of tofacitinib (Tofa) was reported to be as strong as that of the tumor necrosis factor (TNF) inhibitor adalimumab in the ORAL standard trial.(1) Tofa is frequently used in Japan for rheumatoid arthritis (RA) patients who are inadequately responsive to methotrexate (MTX) of >8 mg/week or who are unresponsive to biologics. However, there exist few clinical studies on Tofa with respect to its effectiveness and safety in patients with active RA despite its recognition as a treatment option,(2) nor are there any reports comparing Tofa and non-TNF agents such as tocilizumab and abatacept in active RA patients to date. We routinely prescribe biologics or Tofa at our institutions for MTX-unresponsive patients and switch the drug if it is ineffective. In our study, oral Tofa 10 mg/day was orally administered to biologic- or MTX-unresponsive patients. Therefore, in this study, we aimed to compare the disease status of patients with active RA after treatment with Tofa or non-TNF biologics.

Oral Tofa was administered 5 mg twice daily during the observational period. Remission was evaluated based on DAS28-CRP scores before and at 12 months of therapy. The diagnosis and treatment of RA in this study were conducted in accordance with the 2010 American College of Rheumatology (ACR)/European League Against Rheumatism (EULAR) classification system.(3)

Laboratory matrix metalloproteinase-3 (MMP-3) (Sekisui Medical Co., Ltd., Tokyo, Japan) was assessed before and at 4, 8, and 12 months after starting treatment. We also recorded the percent changes in DAS28-CRP, clinical disease activity index (CDAI) instead of simplified disease activity index due to the use of tocilizumab, and health assessment questionnaire-disability index (HAQ-DI) for all patients at set time points.

We ultimately compared the efficiency of Tofa (n=16) with that of non-TNF (n=15) in biologics- naïve subjects who were non-responsive to more than 3 months of MTX >8 mg treatment (Table 2). We analyzed if the treatments were effective and whether there existed differences between Tofa and non-TNF groups.

Comparisons between the DAS28-CRP, CDAI, HAQ-DI, and MMP-3 scores of both groups versus pre-treatment at each measuring point were assessed with the corresponding Bonferroni multiple comparisons procedure. Comparisons of DAS28-CRP, CDAI, HAQ-DI, and MMP-3 between the groups at each time point were performed by Welch’s t-test. A value of p<0.05 indicated a statistically significant difference. Data were expressed as the mean value ± standard error.

There were no significant differences in age or mean affected period between the groups. Thirteen of 22 patients (59.1%) in the Tofa group and 11 of 20 patients (55.0%) in the non-TNF group had entered remission at 12 months based on DAS28-CRP data. 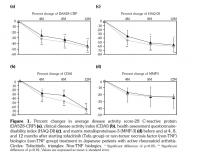 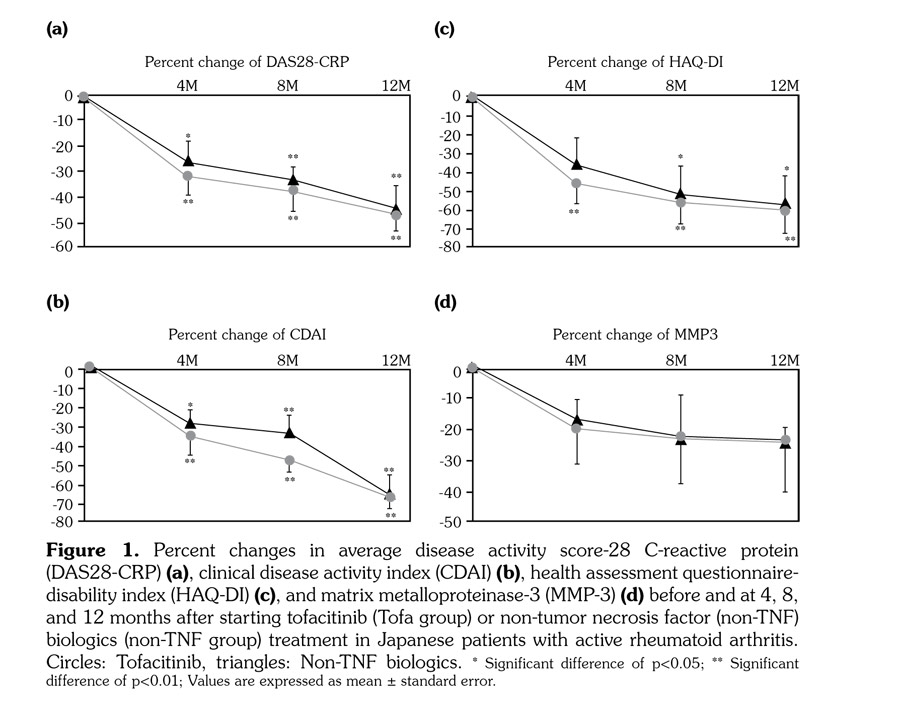 This unique comparative study on the effectiveness and clinical safety of Tofa and non-TNF biologics in Japanese patients with active RA was conducted during a course of over 1 year of treatment. Disease state and laboratory results showed marked improvements during the observational period in both groups. To our knowledge, this is the first study comparing Tofa versus non-TNF biologics in this type of patient population.

Cohen et al.(6) analyzed the efficacy and safety of Tofa in RA patients in the United States and abroad. In their report, pooled phase III data from patients receiving 5 or 10 mg Tofa or placebo twice daily confirmed the efficacy and safety outcomes at 3 and 12 months, respectively. Lundquist et al.(7) reported that numerous phase II and III trials proved Tofa to be safe and effective as a monotherapy or in combination with MTX or other non-biologic DMARDs. Moreover, the clinical efficacy of Tofa and MTX was shown to be equivalent to that of adalimumab in patients with RA.(4) Even patients who did not show clinical improvement with combination non-biologic DMARD and MTX therapy exhibited significantly inhibited structural damage.(5) Taken together, these data indicate that Tofa is a good oral DMARD candidate for treating patients with active RA. In this study, 3 of 25 patients (12.0%) discontinued Tofa because of signs of infection (e.g., cough, fever, nasal mucus discharge), which was comparable with incidences in previous studies. The remaining 22 RA patients displayed no visible adverse effects.

Recently, the 2016 EULAR recommendations for the management of RA stated that Tofa could be considered a first-line molecular-targeted therapy. Moreover, the drug is orally administered, which is advantageous for drug adherence in patients who dislike subcutaneous or intravenous injection.(8) Iwamoto et al.(9) very recently reported that Tofa was effective even without MTX use or after switching from tocilizumab after 24 weeks of treatment. In this study, we compared the effectiveness of Tofa and non-TNF biologics in biologics-naïve groups that had been unresponsive to MTX >8 mg for more than 3 months. Moreover, Tanaka et al.(2) evaluated Tofa versus placebo for treatment of active RA in Japanese patients with an inadequate response to DMARDs in a clinical trial and found that the drug produced dose- dependent ACR 20% improvement response criteria and reduced disease activity. In addition, the therapeutic efficacy of Tofa was observed to be as strong as that of TNF inhibitors in active RA patients.(10) The percent changes of the clinical disease activity indices DAS28-CRP and CDAI were significantly improved by -46.5% and -61.6%, respectively, in the Tofa group and -44.7% and -60.0%, respectively, in the non- TNF group at 12 months of therapy, with no significant differences in improvements from pre-treatment between the groups at any time point. Concerning the functional disability index HAQ-DI, percent change was significantly decreased by 60.0% in the Tofa group and 57.5% in the non-TNF group at 12 months, again with no significant difference in improvements from baseline between the groups. The inflammatory disease index MMP-3 decreased remarkably and comparatively by 24.7% in the Tofa group and 24.9% in the non-TNF group at 12 months. Based on previous reports(10) and our findings, Tofa is a clinically and functionally effective drug that is not only similar to non-TNF agents, but also to overall biologics in active RA patients in Japan.

To our knowledge, the present study on the effectiveness and adverse effects associated with Tofa versus non-TNF biologics was the first of its kind in Japan. It showed that: (i) in 16 biologics- naïve patients who received Tofa therapy, RA manifestations were greatly alleviated; (ii) among 25 patients taking Tofa, there were 3 dropout patients due to infection-like symptoms, which promptly disappeared after Tofa cessation; and (iii) RA-associated conditions in all 6 of the patients who switched from biologics to Tofa were markedly ameliorated as well.

The limitations of this study were its small sample size, short follow-up period, absence of controls, and relatively short RA disease duration.

In conclusion, Tofa was well tolerated in Japanese patients with active RA and produced remarkable improvements in laboratory RA indicators that were comparable to those imparted by non-TNF biologics. Future studies with larger sample size and longer observational period are warranted.