Osteoarthritis (OA) is a progressive disease with an incidence increasing steadily with age while structural changes include articular cartilage damage, osteophyte formation, and subchondral bone changes.(1) There are some classification methods for knee OA, which are qualitative like Kellgren-Lawrence (KL,2) semi-quantitative like whole-organ magnetic resonance imaging score (WORMS,3) and quantitative like joint space width (JSW), cartilage thickness, and meniscal thickness in magnetic resonance imaging (MRI).(4-9) Cartilage thickness, meniscal thickness, and synovial fluid are the basic determinants of the joint space in knee roentgenograms.

Although we can evaluate joint space by roentgenograms, we can evaluate the thickness of the cartilage, meniscus and other tissue components conclusively by MRI. MRI provides quantitative measurement (thickness of the cartilage, meniscus, JSW, etc.) and allows some semi-quantitative measurements, such as WORMS; however, it takes a long time (approximately 40 minutes including the set-up of patient, without the examination of radiologist) with high costs (approximately eight-fold of roentgenogram). There are also qualitative methods for evaluating the joint by roentgenograms, such as KL classification. These are useful and cost-effective methods for diagnosis; however, they are not sensitive enough for the changes in short periods and not quantitative or reproducible enough for measuring the joint space. Because of the necessity of an easier, reproducible, objective, and cost-effective quantitative measurement method for joint space, knee roentgenograms should be investigated further.

Subject number was calculated to be 32 to achieve an 80% power of study. A total of 53 patients (20 males, 33 females; mean age 58.2±5.7; range 47 to 69 years) with roentgenograms and MRIs of the same knees were detected from the files of Giresun Physical Medicine and Rehabilitation State Hospital between January 2014 and July 2014. Because of the exclusions due to the lack of written consents, 40 knees of 40 patients diagnosed as osteoarthritis (14 males, 26 females; mean age 57.4±5.9 years; range 47 to 67 years) were included. The study protocol was approved by the Giresun Physical Medicine and Rehabilitation State Hospital Ethics Committee. A written informed consent was obtained from each patient. The study was conducted in accordance with the principles of the Declaration of Helsinki.

For standardization of roentgenograms in our radiology unit, roentgenograms are obtained in standing position; while the knee is extended vertical, with the patella touching the plate. Distances between X-ray tube, plate, and knee are also kept constant.

Computer-assisted measurements (by the software of Wayne Rasband National Institutes of Health, USA; http://rsb.info.nih.gov/ij/) were applied to roentgenograms for measuring the medial and lateral joint space areas (JSA) of the knee, by two blinded physicians, for two times with an interval of one week (Figure 1). Data were evaluated for intraobserver and interobserver consistencies. By calculating the average of the four measurements (first and second measurements of both physicians, for each compartments), means of CAJSAMs were obtained for medial and lateral compartments of knee joint. All variables were compared with KL classification in roentgenograms, JSW, cartilage thickness, meniscal thickness, and WORMS in MRI.

A qualitative method, KL classification, was performed with the same knee roentgenograms as stated below:(2)

For evaluating WORMS, images are scored for 14 independent articular features as stated below:(3)

Grade of the meniscopathy is scored as stated below:(3)

By an experienced radiologist, all calculation period was approximately 15 minutes for each knee.

Means and standard deviations of the continuous variables are shown in Table 1.

Table 3. Correlation of continuous variables with p values below
× 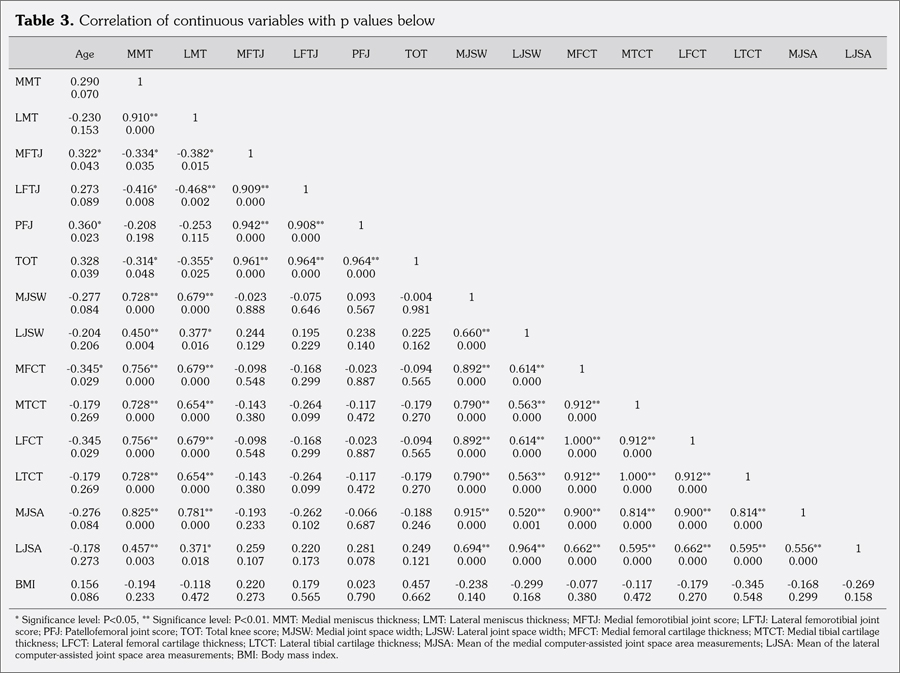 Computer-assisted joint space area measurement is a quantitative method correlated with JSW, cartilage thickness, meniscal thickness and WORMS. In this study, no difference was found between the measurements of two physicians or between the two measurements made by the same physician (Table 2). According to the results of our study, CAJSAM has intraobserver and interobserver consistency and seems to be a reproducible method. Similar to our results, a study evaluating the hip joints with computer reported a high intraobserver reproducibility of JSW measurement.(10) Distinctly, we evaluated the JSW by measuring the JSA and investigated the interobserver consistency too.

Although the KL classification is a qualitative method depending on the JSW, we detected no correlation between grade and JSW, cartilage thickness, meniscal thickness or means of JSAs. This result can be due to other parameters added to JSW, which are osteophyte formation, subchondral sclerosis and cysts. Also, subjective premises in the KL classification, such as ‘‘equivocal, uncertain, moderate or severe’’ can lead to an inconsistency between measurements. Combination of the structural aspects is a drawback and also, it is generally accepted that it takes at least a year before a change of one grade becomes evident.(11,12)

Joint space narrowing (JSN) in roentgenograms is generally attributed to decreasing thickness of the articular cartilage in knee OA. Meniscal subluxation and degeneration also contribute to the prediction of JSN. Therefore, it could be hypothesized that meniscal tears are contributing to JSN in severe knee OA.(13) In a study, higher grade of JSN was found correlated with higher frequency of meniscal tears, but surprisingly, it was not found correlated with higher frequency of articular cartilage erosion.(14) In our study, we did not detect any correlation between grade of meniscopathy and KL classification. Also, there was no correlation between KL classification and meniscal thickness, cartilage thickness, JSW and JSAs. This may be due to subjectiveness of KL classification.

As we expected, femoral cartilage thickness decreased significantly with increasing age. All scores of WORMS increase by the increasing destruction in the joint. For that reason, in our study, positive correlations was seen between age and all scores of WORMS, because destruction of joint increases by age. As well as the correlation we found among the subgroups of WORMS, significant correlation between each medial and lateral JSAs may show that destruction of a compartment may lead to progression in other compartments too. Significant and negative correlations between subgroups of WORMS (except PFJ) and meniscal thickness may confirm the quantitative side of WORMS. A significant correlation is not expected between PFJ and meniscal thickness.

Recently, quantitative measurements of JSN have been described to be more sensitive to change than the semi-quantitative ratings.(15) Thus, in our study, all the quantitative measurements were significantly correlated with the means of JSAs. This result confirms that CAJSAM is a quantitative method, which may be used instead of the other expensive and laborious methods. In a study conducted with patients suffering from rheumatoid arthritis, CAJSAM was evaluated and found reliable for the assessment of disease-related JSN, with excellent sensitivity and specificity.(16)

Roentgenogram is still the gold standard for evaluating the structural changes, since it is non- invasive, cost-effective, practical and generally accessible in OA.(17,18) Also, in recent years, digital image analysis has gained popularity for increasing efficiency and reliability of measurements.(19-21) Some methods for imaging the joint have been suggested (with MRI or ultrasound), but it is generally accepted that measurement of JSW by roentgenograms is currently the best available method for examining the progression of cartilage destruction. Measurement of JSW is recommended by both The United States Food and Drug Administration and The European Agency for the Evaluation of Medicinal Products, Human Medicines Committee, as the primary end-point in clinical trials.(22,23) JSW can be measured as the narrowest distance between bones (minimum JSW), as the mean width, or as JSA, using an eyepiece or image analysis systems.(12,24)

Although MRI is a promising technique, it is still too laborious and expensive to perform in routine clinical practice or epidemiologic studies.(25-27) Available quantitative methods are taking more time with high costs, but CAJSAM takes not more than two minutes and costs not more than a roentgenogram.

Semi-automated softwares have been developed to improve the accuracy of JSW measurement over manual methods.(14) A semi-automated software, Knee Images Digital Analysis, has shown similar results to software which we have used.(28) Also, a fully automatic software has been developed for computer-aided diagnosis of knee OA, compared with conventional grading systems and semi- automatic measurements, and found reliable and reproducible.(29)

Major parameters measured in these methods are JSA and minimum JSW at medial and lateral sides, osteophyte area, and tibiofemoral angle on plain anteroposterior radiographs. In our study, we did not measure the tibiofemoral angle and osteophyte area separately and did not consider area aligned to the tibial eminences. Contrary to WORMS, we did not include the tibial eminences to measurement because, to our knowledge, it is still unclear whether the tibial eminences contribute to development of OA and whether the changes in tibial eminence are OA specific. Contrary to other semi-automated and fully automated methods, we measured the osteophyte area together with the JSA. By this way, we aimed to make the measurement easier with a unique area and evaluate the contribution of meniscal thickness to JSA measurement. Meniscal thickness and meniscal subluxation contribute the JSN.(17) Also, lack of association between osteophyte formation and JSN was stated before.(29)

We applied the measurements in standing, extended knee roentgenograms. Until late 1960s, non-weight-bearing, anteroposterior, lateral and axial roentgenograms were standard. However, by the study of Ahlback in 1968, weight-bearing anteroposterior and lateral projections became common in practice.(30) There are several reports in the literature, which have suggested the use of weight-bearing, flexed knee roentgenograms instead of extended knee.(31-33) However, a study reported that variations in knee positioning significantly influence the quantitative measurement of radiographic characteristics of OA.(34) A study conducted with normal knees, reported a difference of up to 2 mm between the flexed and extended knees and explained it with the changing contact area between femur and tibia.(35) Therefore, standardization of the radiographic procedure is of great importance. So, we chose the standing and extended roentgenograms to provide a definite standardization.

Our study has some limitations. Although the number of individuals in our study provides the 80% power of the study, sample size should have been larger. Moreover, this method is primarily for evaluating the radiologic progression, thus it should also have been evaluated for the correlation with symptom severity. Instead of developing a new software, we tried to establish a new measuring method with an already present software, which has been in use for a long time, especially for measuring lordosis of spine.(36) Semiautomated methods need a short training for using the software and need attention for manual marking of the edges of the area, which will be measured. Although the software we used has an option of calibrating the measurement by the calibration ruler of the digital image, standardization of the technique is important, especially for comparing the images from different radiology units and different digital roentgenogram devices.