Primary Sjögren’s syndrome (pSS) is an autoimmune, chronic-systemic disease determined by both functional and structural abnormalities of exocrine glands throughout the body.(1-5) The annual incidence of the disease in the literature is 3.9-5.3 per 100,000.(6) Two studies from Turkey estimated the prevalence ranging from 0.21% to 0.72% depending on the classification criteria.(7,8) pSS occurs 10 to 20 times more frequently in females over males.(9,10)

Sjögren’s syndrome-induced abnormalities of exocrine glands primarily lead to dryness of eyes and mouth. Clinical presentation may vary from sicca symptoms of dry eyes, dry mouth to severe systemic symptoms.(6) In addition to these, female patients with pSS often were reported to have vaginal dryness and consequent chronic dyspareunia.(11,12) Sometimes, chronic dyspareunia may be the presenting symptom in yet undiagnosed pSS cases.(13) However, most females diagnosed with pSS are not informed about vaginal dryness, consequent chronic dyspareunia, and sexual problems associated with the condition.(5)

Although chronic dyspareunia is a well-reported symptom in females with pSS, its impact on sexual functionality of patients has rarely been studied.(14) However, it is known that there is a possible relationship between sexual well-being and overall life satisfaction in females.(15) In spite of this fact, female sexual functionality is a difficult subject to talk with patients, particularly in traditional societies like Turkey. Therefore, data on the impact of pSS on female sexual functionality need to be increased to identify the effect of this chronic disease on life of women and to develop management strategies against sexual dysfunction. Therefore, in this study, we aimed to evaluate the sexual function of female patients with pSS in comparison to healthy females by using the Female Sexual Function Index (FSFI).

This case-control study included a total of 31 female patients (mean age 46.0±10.2 years; range 30 to 68 years) who had been under follow-up with diagnosis of pSS according to the American-European Consensus Group classification criteria(16) and expert rheumatologist opinion in Cumhuriyet University Medical Faculty between June 2014 and June 2015, and 27 healthy females (mean age 44.2±8.5 years; range 30 to 55 years) as control group. The healthy subjects were selected among hospital staff of the same ethnicity as the patients. The participants of this study had a sexual partner.

Exclusion criteria were as follows: chronic renal or hepatic impairment, presence of malignancy, smoking, other rheumatic/autoimmune disorders, medication or hormones having a potential to affect sexual functions, and history of gynecologic surgery within the past three months.

The study protocol was approved by the Institutional Ethics Committee (date 13.05.2014, no 2014-05/03) and conducted in accordance with the principles of the Helsinki Declaration and local regulations. All study participants gave written informed consents before any study- related procedures.

Sexual function of the participants was assessed by 19-item FSFI. The FSFI evaluates sexual function in six subdomains: arousal, desire, lubrication, orgasm, pain, satisfaction. Higher scores demonstrate preferable sexual function. The total score is obtained by adding the scores of six-subdomains having a range of 2-36.(17) The validity and reliability of Turkish version of FSFI have been shown by Öksüz and Malhan.(18)

The primary outcome of the study was FSFI total and subscale scores in patient group in comparison to control group. The secondary outcome was the correlation between duration of pSS and FSFI scores of patients.

Mean duration of pSS in the patient group was 35.9 months (range 3 to 264 months). The most commonly used agent for the treatment of pSS was hydroxychloroquine, alone or in combination with prednisone (n=20, 64.5%). pSS patients did not show significant differences from healthy controls in terms of education level, smoking status, or comorbidities (p>0.05 for all, Table 1).

Table 1. Sociodemographic and clinical findings of patient and control groups
× 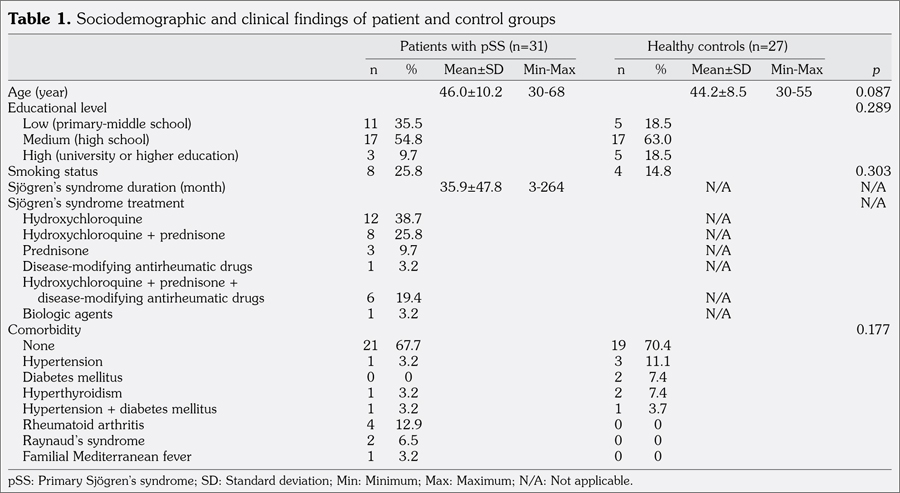 In the correlation analysis, FSFI total and subscale scores, except for pain, were found to be negatively correlated with duration of pSS; in other words, as disease duration increased, FSFI scores showing female sexual function decreased (Table 4). 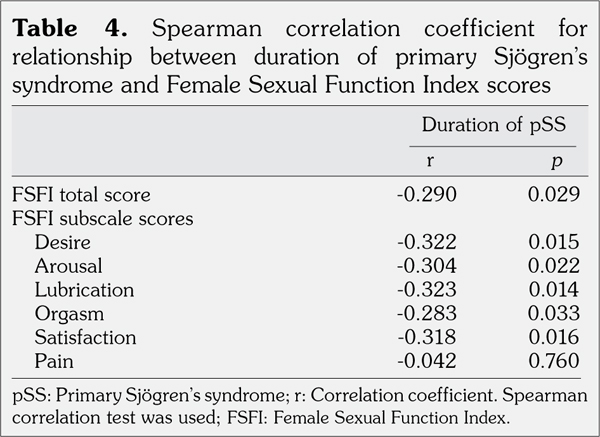 In this case-control study, we showed that females with pSS have significant sexual dysfunction in comparison to healthy females with varying severity depending on the duration of disease. Our study is one of the limited number of studies in the literature on the impact of pSS on the female sexual functionality assessed by a validated self-report measure, FSFI.

pathophysiology, activity, and psychological impact of disease, and drugs used for the treatment.(19,20) Among these factors, vaginal discomfort and pain may mostly contribute to sexual dysfunction in patients with pSS.(20)

Although recent immunologic and clinical researches led to significant advances in diagnosis and management of pSS, there is rather a small number of studies on the impact of the condition on sexual functionality of females.(1,2,21) van Nimwegen et al.(14) recently studied the impact of pSS on female sexual function by a number of self-administered questionnaires including FSFI on 46 patients and 43 age-matched controls and found that females with pSS have disrupted sexual function and more sexual discomfort compared with healthy controls. In the mentioned study,(14) median total FSFI scores were 20.6 and 30.3 for females with and without pSS, respectively. They also found that sexual function is affected by physical factors such as vaginal dryness, pain and fatigue, and psychological involvement of pSS. Similarly, in the present study, we found mean FSFI total scores as 18.9 and 25 in patients with pSS and age-matched healthy females, respectively (p=0.004), showing the impairment of sexual functionality in females with pSS. Furthermore, as in the study by van Nimwegen et al.,(14) five out of six domains of FSFI -arousal, lubrication, orgasm, satisfaction, and pain- were significantly lower in patients with pSS in our study. In the study by van Nimwegen et al.,(14) all subscale scores were significantly lower in females with pSS except for satisfaction score.

We also found more inflammation and atrophy in cervical smear in patients with pSS than controls, most probably due to vaginal dryness in the patients. Vaginal dryness and dyspareunia are common symptoms of females affected with pSS.(23) These gynecological symptoms lead to impaired sexual intercourse, negatively affecting pleasure, satisfaction, and sexual ability.(24) As in our study, Priori et al.(25) showed that pSS (pre- and postmenopausal) patients had impaired quality of sexual function, and FSFI was found as a valuable measure for assessing sexual function. Furthermore, Cirpan et al.(26) performed cervical cytology, colposcopic examination, and human papillomavirus deoxyribonucleic acid testing in females with Sjögren’s syndrome, and demonstrated similar findings in Sjögren’s syndrome patients and controls. However, our study showed that pSS patients had higher prevalence of inflammation and atrophy in cervical smear.

The main limitations of our study were the small sample size and cross-sectional study design that prevented us from reaching a definitive conclusion on the prevalence of sexual dysfunction among females with pSS. However, this is one of the few studies in the literature on the clinical effect of pSS on female sexual functionality, the importance of which has been well-established for females to maintain a satisfactory quality of life.(15,19,20)

In conclusion, pSS causes sexual dysfunction in females with a severity increasing with disease duration. Clinical management of females with pSS should cover the assessment of sexual functionality of patients and taking the necessary precautions to maintain satisfactory quality of life and treatment outcome. Considering the importance of sexual functionality in the overall health of females, both patients and physicians should be informed on the possibility of pSS-related female sexual dysfunction. The findings of this study should be confirmed by further large-scale prospective studies on the prevalence, impact on patients’ quality of life, diagnosis and treatment approaches of sexual dysfunction among females with pSS. Also, further studies are required on the management of discomfort caused by sexual dysfunction in female pSS patients.