Immunoglobulin A (IgA) vasculitis (Henoch- Schönlein purpura; HSP) is an IgA-mediated systemic vasculitis affecting the skin, gastrointestinal system, and small vessels of kidneys.(1) Generally, it is developed after upper respiratory tract infection in children aged 3 to 10 years, and it has a good prognosis.(2) It is sometimes observed in adults, but its prognosis in adults is much poorer than in children. The definite cause of the disease is unknown, but infections, drugs, and malignancies may be triggering factors. While infections are more commonly identified as the cause in children, malignancy may be a triggering factor in adults.(3-5) This report illustrates a rare case of HSP associated with rectal adenocarcinoma.

A 62-year-old male patient presented with diffuse abdominal pain, which lasted for one month, bilateral knee and ankle pain, and numerous purpuras. The patient had no specific medical or family history. Physical examination on admission showed numerous palpable purpuras typical for IgA vasculitis, on both lower extremities (Figure 1a). Laboratory findings of the patient are shown in Table 1. 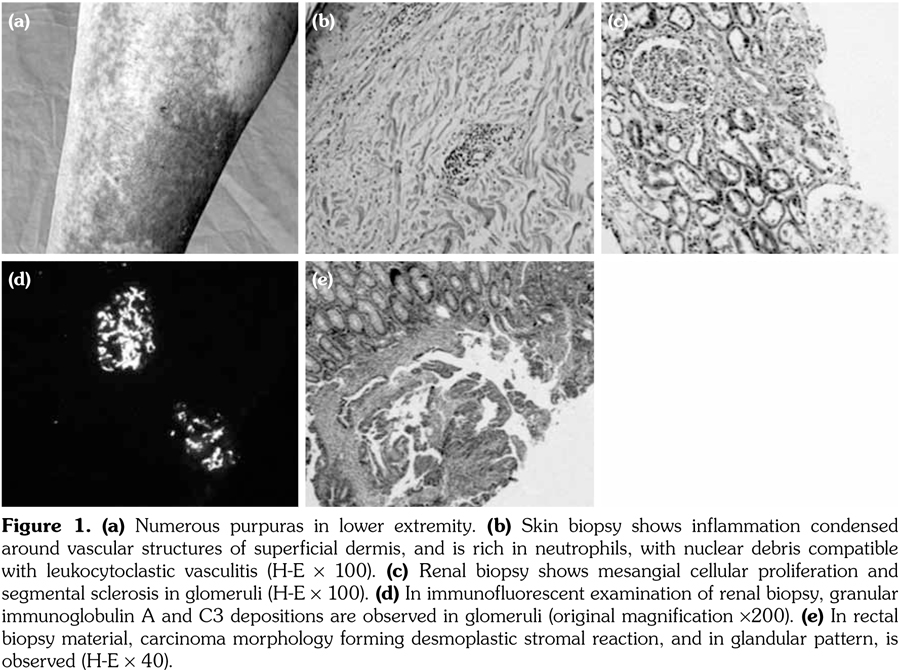 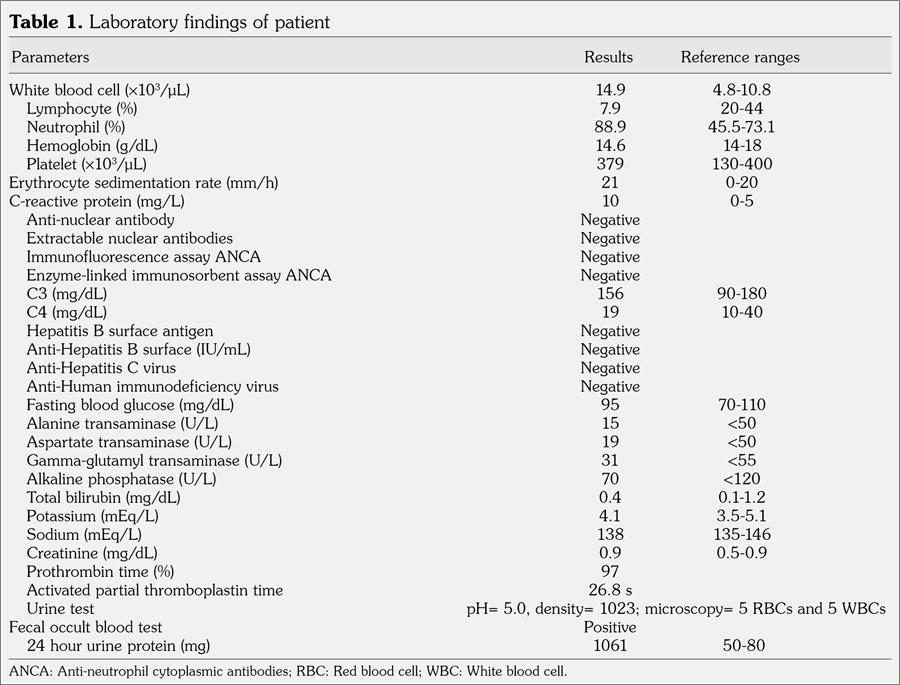 On histopathologic evaluation, the skin biopsy specimen revealed leukocytoclastic vasculitis (Figure 1b). The result of a 24-hour urine protein was 1061 mg, so a renal biopsy was performed. The light microscopy examination of the biopsy sample showed mesangial hypercellularity at the glomerular baseline and segmental sclerosis in a few glomeruli (Figure 1c). In the immunofluorescent examination, granular IgA deposits were observed in the glomeruli (Figure 1d).

Blood, urine, and cultures test results were negative. The chest X-ray was normal. There was no specific finding in the echocardiography. The patient was diagnosed with IgA vasculitis, and treatment with prednisolone 0.8 mg/kg/day was initiated. The rash subsided under this treatment, and joint pain recovered, but as the patient’s abdominal pain continued with intermittent rectal bleeding, abdominal computed tomography was performed. This revealed an irregular rectal wall thickening along approximately a 3-4 cm segment in the distal part of rectum, and spicular extensions into perirectal fat tissue in the left posterolateral part of the rectum. Colonoscopy demonstrated an ulcerovegetan mass occupying approximately 30% of the lumen of the rectum. A carcinoma with glandular pattern in morphology was diagnosed from the biopsy sample taken from this mass (Figure 1e). The patient was referred to the oncology clinic. He was considered as having an advanced stage rectal adenocarcinoma, and neoadjuvant chemotherapy was planned. A written informed consent was obtained from the patient.

Immunoglobulin A vasculitis, formerly called Henoch-Schönlein purpura, is an immune complex vasculitis mainly affecting small vessels. Clinical presentation of the disease predominantly includes cutaneous purpura, arthralgia and/or arthritis, acute enteritis, and glomerulonephritis. It is commonly encountered during childhood, and has a good prognosis. The adult version has a relatively worse prognosis, and has renal involvement representing the main cause of morbidity and mortality.(6) In the presence of classical clinical characteristics of IgA vasculitis, detection of IgA deposits in tissue by immunofluorescent examination may differentiate IgA vasculitis from other vasculitis types. Skin biopsy is frequently reported as consistent with leukocytoclastic vasculitis. Since skin biopsy examination by immunofluorescent method is not very helpful in the diagnosis, biopsy samplings from other tissues should be considered.(7) Renal biopsy may vary from mild mesangial expansion to the more serious necrotizing glomerulonephritis, which is mainly of IgA deposition.(8) Signs in the renal biopsy of IgA vasculitis are the same as those of IgA nephritis.(9) The etiology of IgA vasculitis is yet to be determined; however, there are often precipitating factors, such as infectious diseases, a reaction to drugs or malignancy.(10) It was reported in previous epidemiological studies that the disease was more commonly encountered especially in the autumn and winter months, so upper respiratory tract infections were suspected to be the main triggering factors.(11-13) In adults, an association of IgA vasculitis with malignancy has been reported, with a relative risk of malignancy of 5.3 among patients with IgA vasculitis, when compared with age-matched controls without HSP.(14) Malignancy may accompany IgA vasculitis, while it may also be encountered before malignancy. The pathogenetic mechanisms of malignancies which accompany IgA vasculitis are not clearly known.(15) Hematological malignancies are more common in all vasculitis cases, while solid malignancies are more common in IgA vasculitis.(16) To our knowledge, there is no previous case in the literature of rectal tumor with IgA vasculitis.

In conclusion, the present case indicates that if rectal bleeding accompanies abdominal pain in adult patients with a clinical picture of classical IgA vasculitis, concomitant rectal malignancy may be present in addition to intestinal ischemia.