Pediatric rheumatology subspecialty was born in the 19th century due to the lack of pediatricians’ ability to cover the whole field of the pediatrics. The first attention was commonly paid on rheumatic fever in the early stages of its development, but then other rheumatic diseases of childhood attracted attention. Pediatric rheumatology is considered as one of the latest and the least populated subspecialty in the pediatrics. However, its development is increasing day by day both clinically and scientifically.(1)

Scientific meetings are intended to gather clinicians, researchers and even patients together, allowing the sharing of ideas to contribute in professional network. Also, meetings enable researchers to share their works with their peers and experts from the field. Oral and poster presentations are the most common forms in this regard. Abstracts can be described as the first fruits which a researcher gets, but unless they become full-text publications, their usefulness will be limited. Even though an abstract includes the most important data, only a limited group (the participants of the congress or the ones who can reach to the abstract book) would be aware of it without a full-text publication. Also, it was advocated that abstract to full-text rate shows the importance of the congress in the related field.(2)

We conducted the study between November 2014 and January 2015 at the Department of Pediatric Rheumatology, Medical Faculty of Dokuz Eylül University. We performed abstract data extraction, systematic search for full-text publications, and full-text publication data extraction according to a method which was modified from the study by Smith et al.(4) An ethical approval was not required, since it was a screening method which did not include any patient nor author data.

The presented abstracts in EULAR 2009 were archived in The European League Against Rheumatism Abstracts2ViewTM site.(5) We screened this site and included all the abstracts related to pediatric rheumatology in the study. We chose the year 2009, because it was advocated that five-years was a suitable time to show the full-text publication rates of the previously presented abstracts.(4)

Two independent researchers entered each abstract into a database. We recorded the title of the abstract, name of authors, type of presentation, and country of the origin. When we encountered a multicenter study abstract, we determined the country of the origin according to the country of the first author. We resolved the discrepancies in recording basic data from presented abstracts by a consensus with a third researcher. We based the consensus on the predominance of the decisions. In such cases, we accepted the decision of the third researcher as the final decision when two of the three researchers were in agreement.

Two researchers searched the titles and authors of the abstracts in Pubmed,(6) Web of Science,(7) and Google Scholar(8) databases. We resolved the discrepancies in search results by a consensus with a third researcher as aforementioned. We sought potential articles firstly by searching for the title and first author of the abstract. If we found no corresponding article, we repeated the search up to five times in each database using alternative authors and key words. We retrieved all the possible full-text publications and verified the concordance between the information contained in the presented abstract and full-text publication to ensure that they represent the same body of work.

Statistical analysis
We performed the statistical analyses using the IBM SPSS version 20.0 software (IBM Corporation, Armonk, NY, USA). We summarized data as median and minimum-maximum range or percentages. We used the Mann-Whitney U test to determine the differences between presentation types (oral vs poster) and set the level of significance at p<0.05.

We detected a total of 220 abstracts related to pediatric rheumatology. Twenty-two of them had only the title, authors' names, and institution of origin, but no body text in the Abstracts2ViewTM site. Therefore, we conducted the below analysis over 198 abstracts. We found 86 (43.4%) abstracts as full-text articles.

We noted four abstracts having full-text publication date prior to the EULAR 2009 Congress and considered their publication time as zero. The elapsed date between the presentation in EULAR 2009 and the full text publication was median 19 months (range, 0 to 64 months).

The distribution of the abstracts and full-texts according to sub-categories, which appeared in EULAR Abstracts2ViewTM site, are given in the Table 1. 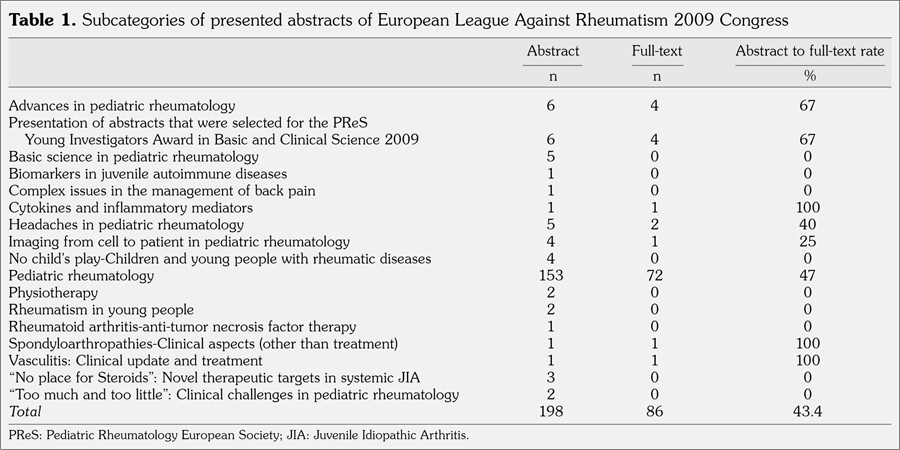 Table 2. Diseases in abstracts and full-texts
×

Table 3. Journals where abstracts were published as full-texts
× 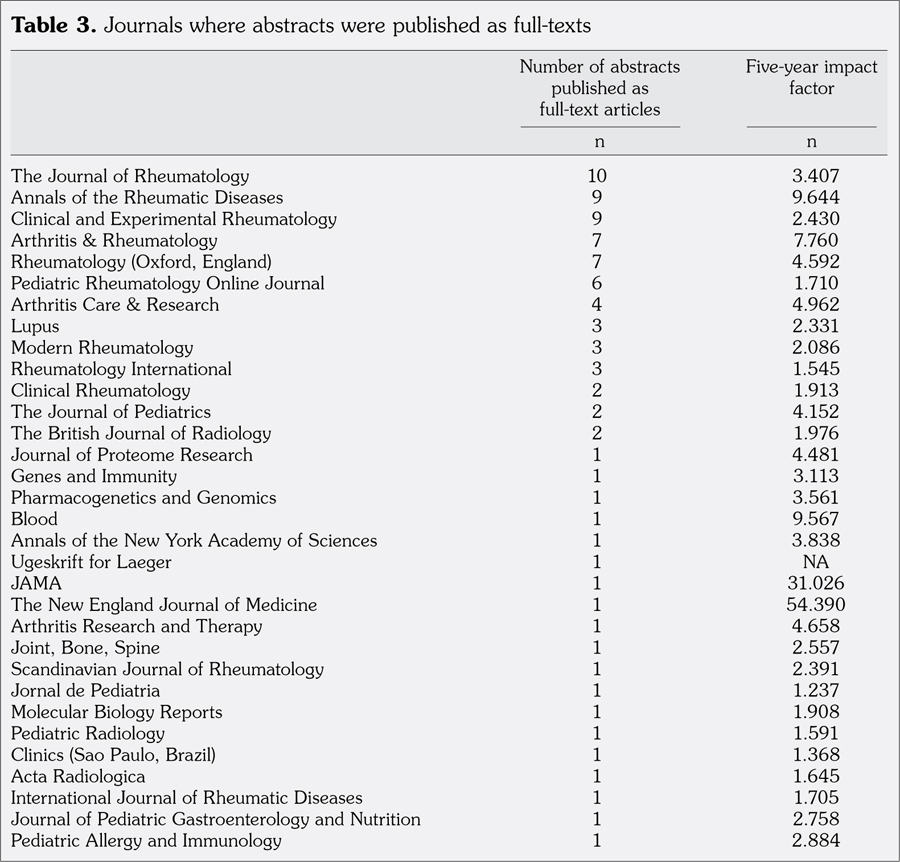 This study aimed to investigate the publication rates of the abstracts presented in the EULAR 2009 that were related to pediatric rheumatology. Our results showed that approximately three out of five abstracts (43.4%) were published in the full-text form in 19 months, in a duration of approximately five years (64 months). This data conform with those reported previously (Table 4).

Table 4. Rates of abstract publications from present study and other rheumatology meetings
× 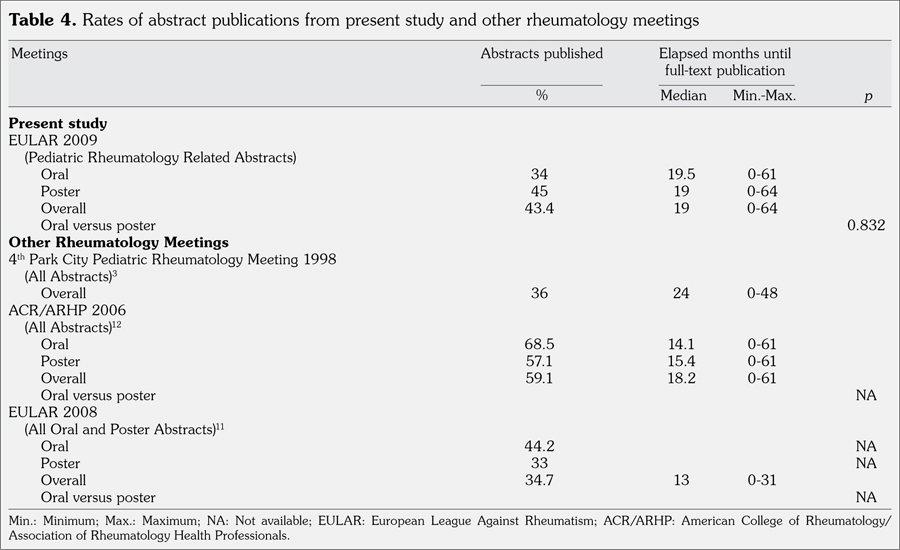 The rates reported in the present study seem higher than the first report of Hashkes et al.(3) about the publication rates of a pediatric rheumatology meeting. In the mentioned study, the authors investigated the abstracts of the 4th Park City Pediatric Rheumatology Meeting, which was held in 1998 in USA, and reported a publication rate of 36%. Over a four-year period after the meeting, the authors reported a median publication time of two years, which is longer than the results obtained in this study. In the light of the present results, we may suggest that the productivity of pediatric rheumatology has been increasing since then. This may be related to the increasing number of rheumatology journals where authors can find place for their manuscripts and increase the overall quality of work.

The first journal where the highest number of full-texts were published was the Journal of Rheumatology, as Hashkes et al.(3) reported. Although the official journal of EULAR is Annals of the Rheumatic Diseases, this journal ranked in second place according to publication rates following the Journal of Rheumatology. In the previous reports of adult rheumatology congresses, Arthritis and Rheumatism (it has been divided into two independent journals as Arthritis & Rheumatology and Arthritis Care & Research) ranked in first place in terms of publication rates.(11,12)

Even though EULAR is a European meeting for the rheumatology field, it was interesting to see many studies from countries outside of Europe presented in EULAR at least in the field of pediatric rheumatology.

We hope that the data obtained in our study may assist in coming to conclusions about the progression of pediatric rheumatology by allowing a comparison between our results and those previously reported. While the strength of our study was the systematic search used, it is likely that our publication rates were higher due to publication at local journals.

Searching the full-texts in the journals using in PubMed, Web of Science and Google Scholar could be counted as a limitation, due to not all the journals were indexed in these databases. This could affect the results.