Objectives: This study aims to evaluate the efficacy of adalimumab as a first line biologic agent in specific subtypes of juvenile idiopathic arthritis (JIA) patients with associated uveitis.
Patients and Methods: We retrospectively analyzed the data of 11 JIA patients (8 males, 3 females; mean age 14.5 years; range 9 to 18 years) with associated uveitis treated with biologic therapy. All patients were diagnosed as oligoarticular/extended oligoarticular or enthesitis-related JIA subtypes, treated with methotrexate, and had active or previous history of uveitis for which adalimumab was prescribed. We tested all patients for anti-nuclear antibody presence and human leukocyte antigen genotype. We assessed disease activity and therapy efficacy by American College of Rheumatology 50%, 70%, and 100% improvement criteria. We evaluated uveitis activity by slit-lamp biomicroscopy and recorded adverse events.
Results: Of the JIA patients, three (27.27%) had oligoarticular/extended oligoarticular JIA and eight (72.73%) had enthesitis-related arthritis. Anti-nuclear antibody positivity was present in 27.27% (all females) while human leukocyte antigen-B51 was determined in 62.5% and human leukocyte antigen-B27 in 12.5% of patients. Mean uveitis duration before adalimumab introduction was 12.3 months. After two years of follow-up, there were no relapses of uveitis and visual acuity was stable while on adalimumab and methotrexate treatment. All patient were gradually tapered and discontinued treatment with topical steroids. Disease activity improved and seven patients (63.64%) achieved American College of Rheumatology 100% response rate (attained remission), while four patients (36.36%) achieved American College of Rheumatology 70% response rate.
Conclusion: Anti-nuclear antibody positivity with oligoarticular/extended oligoarticular and enthesitis-related arthritis JIA subtypes, which are known for their high risk to develop uveitis, may benefit from adalimumab as a first line anti-tumor necrosis factor agent.

Juvenile idiopathic arthritis (JIA) is the most common chronic rheumatic condition in children and comprises of a heterogeneous group of seven different diseases,(1,2) Some JIA subtypes have increased susceptibility to develop inflammation of anterior or posterior chamber, known as uveitis. Antinuclear antibody (ANA)-positive females younger than seven years of age with oligoarticular/extended oligoarticular JIA are at greater risk to develop uveitis, as well as males older than six years of age with enthesitis-related arthritis (ERA) JIA.(3) Uveitis is an important extra- articular manifestation of JIA present in 10 to 30% of patients.(4) Chronic course, bilateral onset, and recurrent episodes are characteristics of childhood uveitis. Unfortunately, due to young age, uveitis may be asymptomatic or unrecognized.(5) Usually, it is diagnosed within the first seven years after the onset of arthritis; however, structural damage is present in 30 to 50% of children when JIA diagnosis is established.(6) Regular ophthalmological screening is recommended in these patients, particularly in certain JIA subtypes, to prevent visual loss.(4,7,8) Without adequate treatment, chronic inflammation might lead to severe irreparable damage and structural changes with serious complications (posterior synechiae, band keratopathy, cataract, glaucoma, hypotonic, or macular edema) as well as blindness which may have additional impact on quality of life.

Regarding the impact of these facts on clinical decision and the importance of the choice of first biologic agents in everyday clinical practice, several years ago, we decided to implement specific practice to prescribe adalimumab preferably as the first anti-tumor necrosis factor (TNF) agent in all ANA positive oligoarticular/ extended oligoarticular and ERA JIA patients with associated uveitis at our center. Therefore, in this study, we aimed to evaluate the efficacy of adalimumab as a first biologic agent in specific subtypes of JIA patients with associated uveitis.

We retrospectively analyzed the data of 11 JIA patients (8 males, 3 females; mean age 14.5 years; range 9 to 18 years) treated with biologic therapy from the registry of Clinic of Pediatrics, Clinical Center Niš between April 2010 and May 2012. All patients were diagnosed as ANA positive oligoarticular/ extended oligoarticular or ERA JIA subtypes, with active or previous history of uveitis for which adalimumab was prescribed if it failed to respond to standard treatment. All patients were regularly screened by an ophthalmologist for uveitis by slit-lamp biomicroscopy examination, according to the recommendations.(4) Possible complications of chronic inflammation were assessed by intraocular pressure measurement and fundus examination. The number of flares and ocular complications were recorded. In case of acute new onset of uveitis or uveitis relapse flare, activity of inflammation in the eye was assessed weekly and monthly. In case of active ocular inflammation, patients were treated with topical treatment with steroids and cycloplegics in addition to disease-modifying antirheumatic drug therapy (methotrexate 10-20 mg/m(2)/weekly). In case of unsatisfactory response, treatment with adalimumab was initiated (24 mg/m(2) in two weeks intervals). Study was approved by the Ethical Committee of the Medical Faculty, University of Nis, Serbia. and informed written consent was obtained from parents and/or patients. The study was conducted in accordance with the principles of the Declaration of Helsinki.

We used International League of Association for Rheumatology classification criteria for JIA diagnosis and subtype categorization.(1) Registry had been systematically collecting demographic data of JIA patients such as sex, age, age at disease onset, disease duration, previous and concomitant therapy, disease activity, and treatment efficacy. We obtained blood samples every three months for routine laboratory monitoring of drug treatment safety. Additionally, we tested all patients for ANA presence and performed human leukocyte antigen (HLA) genotype test. We assessed disease activity and therapy efficacy by calculating the American College of Rheumatology Pediatric (ACR Pedi) score for 50%, 70%, and 100% improvement criteria, using six core set variables: the physician global assessment of disease activity on a 10 cm visual analog scale (0-100), the parent/patient global assessment of overall well-being on a 10 cm visual analog scale (0-100), the Childhood Health Assessment Questionnaire (0-3), the numbers of joints with limited range of motion and active arthritis, and erythrocyte sedimentation rate. The definition of improvement states that there should be at least 50% of improvement (70%, 100%) from baseline in three out of six core set variables and no more than one core set criteria should worsen more than 30%.(9) Disease remission was considered according to the Wallace et al. criteria.(10)

Detailed analysis of registry records produced data of 11 JIA patients who were followed-up for two years and diagnosed as active JIA associated uveitis treated with adalimumab. All patients were biologic treatment naive. Three patients (27.27%) were diagnosed as oligoarticular/ extended oligoarticular while eight (72.73%) were diagnosed as ERA JIA subtype. Detailed demographic and disease data are presented in Table 1. Two patients had monocular visual loss, but treatment was introduced due to the acute uveitis in previously unaffected eye.

During the two-year follow up period of adalimumab treatment, there were no relapses of uveitis and visual acuity was stable. All patients were gradually tapered and treatment was continued with topical steroids after approximately four months of adalimumab treatment. At the end of the observational period, only two patients (18.18%) had monocular visual loss which was present before the commencement of adalimumab therapy. Disease activity, measured by ACR response rates, improved in seven patients (63.64%) achieving ACR 100% response rate (attained remission) and four patients (36.36%) achieving ACR 70% response rate (Figure 1). We recorded no serious adverse events except for pain at the injection site. 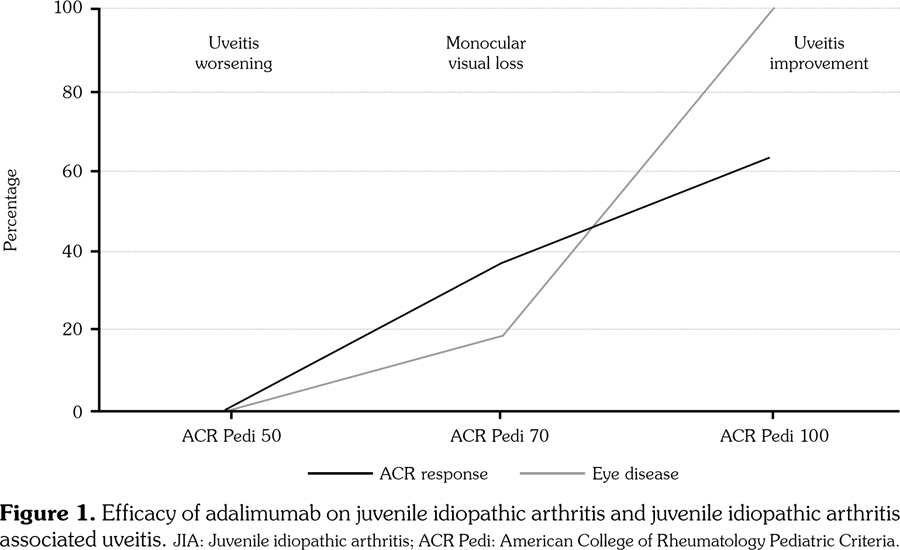 Juvenile idiopathic arthritis associated uveitis is one of the most severe extra-articular manifestations in JIA. It is estimated that 20 to 30% of JIA patients are at risk to develop uveitis with consequent loss of visual acuity or blindness.(5,11-13) Initial treatment with topical steroids, cycloplegics, and disease modifying drugs are often insufficient to control disease activity and may lead to serious structural damage.(11,14,15) Therefore, certain research groups have developed a set of new treatment and follow-up recommendations.(4,16)

Improvements in anti-TNF-alpha drugs have changed long-term outcomes in patients who did not respond to second line disease-modifying antirheumatic drugs.(3,16-20) Different biologics targeting the pivotal cytokine TNF-alpha in pathogenesis of these chronic diseases were used with different efficacy in JIA associated uveitis. Infliximab and etanercept were the first biologics available for usage, with beneficial effects on the suppression of the disease activity in eye and joints,(21,22) but etanercept had shown less effectiveness in controlling ocular inflammation than infliximab.(20,23) Some published data even indicated that etanercept might cause relapses of uveitis, or induce its onset.(24) Adalimumab has been shown to be effective not only in treating JIA, but also in refractory cases of intraocular inflammation.(3,18,25-28) In their prospective comparative study, Simonini et al.(29) have demonstrated superior efficacy of adalimumab compared to infliximab in the treatment of refractory chronic uveitis in JIA patients. Similar findings were reported in an analysis of the Italian National Registry(30) Consequently, several years ago, researchers of our center decided to implement specific clinical practice to prescribe preferably adalimumab as the first anti-TNF agent in all ANA positive oligoarticular/extended oligoarticular and ERA JIA patients with JIA associated uveitis.(12) This is in accordance with a recent study of Tappeiner et al.(31) who reported lack of efficacy of adalimumab on ocular disease in JIA patients with severe uveitis and frequent flares of uveitis where adalimumab was not the first anti-TNF- alpha treatment choice.(31)

Recent data published from German BIKER biological registry demonstrated that the risk of uveitis flare was similar in patients with positive history of uveitis treated with etanercept or adalimumab.(32) Same study has reported no new uveitis events upon treatment with adalimumab. It is interesting to note that German pediatric rheumatologists, similar to us, preferably prescribed adalimumab to JIA patients who had a history of previous uveitis and have been diagnosed as oligoarticular/extended oligoarticular JIA; however, this was not the case for ERA patients.

Presence of HLAB27 and HLAB51 haplotypes as genetic susceptibility factors associated with development of JIA uveitis has been confirmed in our small cohort.(3) Additionally, ANA positivity was found in all female JIA patients with associated uveitis similarly to the well-known data.(11,12,16,33,34) After two years of follow-up, our results have shown good clinical response of the eye inflammatory process and the joint disease activity while on treatment with adalimumab in combination with methotrexate. Different authors have reported the same findings.(35,36) The ongoing SYCAMORE trial has been investigating the clinical effectiveness and safety of dual adalimumab and methotrexate treatment of JIA associated uveitis.(6) Our results have shown no new flares or worsening of visual acuity and only two patients had monocular visual loss, which was already present before starting adalimumab treatment. Similar findings have been reported by several reports.(28,29,35) We should highlight that our patients were previously biologically naive, which might explain the high efficacy obtained. This is in accordance with the data of Simonini et al.,(37) who also demonstrated better efficacy of adalimumab when used as a first anti-TNF-alpha treatment in chronic childhood uveitis. Steroid sparing effects, found in our patient cohort, enabled reduction and complete ending of steroids after commencing adalimumab and methotrexate, which is in concordance with published data.(38,39) The fact that no serious adverse events were recorded during the follow- up period indicates that safety profile of these therapeutic options is high. Patients only reported pain at the injection site.

A limitation of our study is the small sample size, disallowing to make a direct comparison between.

In conclusion, our study indicates that ANA positive oligoarticular/extended oligoarticular and ERA JIA subtypes, known for their high risk to develop uveitis, may benefit from adalimumab as a first-line anti-TNF agent.

The authors acknowledge financial support from the Ministry of Science and Technological Development of Serbia (Project 41018).