Objectives: This study aims to evaluate the reproducibility of Turkish versions of multidimensional assessment of fatigue (MAF) and fatigue severity scales (FSS) and the relationship between health related quality of life, disability, and psychological status in patients with systemic sclerosis (SSc).
Patients and methods: A total of 21 female patients (mean age 47.14±10.39 years; range 18 to 75 years) who met 2013 American College of Rheumatology/European League Against Rheumatism criteria for SSc were evaluated for severity of organ involvement and symptoms. Turkish version of MAF, FSS, and visual analog scale of fatigue were assessed at baseline and after two to three weeks. Level of dyspnea was noted and disability, functional limitation, and quality of life were assessed by health assessment questionnaire, 6-minute walking distance, and short-form 36, respectively.
Results: Ten patients had diffuse and 11 had limited SSc. MAF subscales and FSS had significant correlations with short-form 36-vitality subscale and 6-minute walking distance. Intraclass correlation coefficients for FSS and visual analog scale of fatigue were 0.824 (95% confidence interval, 0.566- 0.929) and 0.932 (95% confidence interval, 0.832-0.972), respectively. The intraclass correlation coefficients for MAF subscales changed between 0.916 and 0.968, except for MAF-timing (intraclass correlation coefficient, 0.404).
Conclusion: Our results revealed that FSS and MAF subscales had high reproducibility and correlated well with quality of life and disability scales which, to some extent, may suggest convergent validity of MAF subscales and FSS in SSc. The incompatible nature and four-choice answering in two items of MAF-timing may be the underlying reason for trivial relationship with other parameters. The Turkish version of MAF and FSS may be used to assess fatigue in patients with SSc.

Systemic sclerosis (SSc, scleroderma) is an autoimmune disease which leads to multi-organ involvement through a combined mechanism of inflammation, fibrosis, and vascular damage.(1) SSc effects mostly females and is an important cause of disability and loss of health related quality of life (QoL).(2,3) Fatigue is increasingly recognized in patients with SSc as a debilitating and bothersome symptom which rated similarly to those patients with other forms of rheumatic disorders and worse than in the general population and cancer patients in remission.(4,5) However, assessment of fatigue in SSc has been generally conducted using single-item rating which causes a limitation. Multidimensional assessment of fatigue (MAF) scale, as well as Fatigue Severity Scale (FSS), may allow more detailed evaluation of fatigue in SSc.

Multidimensional assessment of fatigue is a revised version of Piper Fatigue Scale which was originally developed and tested in oncology patients. The MAF measures four dimensions of fatigue: severity, distress, degree of interference in activities of daily living, and timing. The global index of MAF is calculated by summing the total scores obtained from severity and distress subscales as well as averages of degree in interference in activities of daily living and one of the timing items. The item scores in the subscales are carried out on a 1-10 Likert scale except for timing items which score frequency and degree of fatigue in four grades. Highest scores in MAF indicate greater fatigue. The FSS contains nine statements concerning fatigue and is scored on a 7-point Likert scale. The Turkish versions of both MAF and FSS were shown to be valid and reliable in different patient populations.(6-8)

In this study, we aimed to evaluate the reproducibility of Turkish versions of MAF and FSS and the relationship between health related QoL, disability, and psychological status in patients with SSc.

A total of 21 female patients (mean age 47.14±10.39 years; range 18 to 75 years) who met the 2013 American College of Rheumatology/ European League Against Rheumatism classification criteria(9) for SSc were recruited from our outpatient department between July 2015 and December 2015.

The inclusion criteria were to have no previous diagnosis of comorbidities which may increase fatigue severity or no history of using anti- psychiatric drugs or membrane stabilizing agents. We excluded patients with a history of neuro- endocrine disorders or receiving high dose corticosteroid therapy or biologics like rituximab.

Patients were scrutinized for symptoms and degree of organ involvement. Cutaneous changes were evaluated by using the modified Rodnan skin score(10) and patients were clinically classified as having diffuse or limited SSc according to the LeRoy clinical criteria.(11) Also, all patients were evaluated for physical limitations and QoL by performing health assessment questionnaire and Short-Form 36 (SF-36). Patients’ dyspnea scale was graded according to the modified Medical Research Council dyspnea scale which includes five grades.(12) Six-minute walking distance was noted in meters.

Turkish versions of MAF, FSS, and visual analog scale of fatigue (0-10 numeric scale) within the past week were performed at baseline and two-to-three weeks after the first evaluation. During this period, medications used by patients did not change. All clinical evaluations were performed by the same experienced physician. The Medical Faculty of Erciyes University Ethics Committee approved the study protocol and informed consents were obtained from all patients. The study was conducted in accordance with the principles of the Declaration of Helsinki.

Statistical analysis
All analyses were performed on a personal computer using IBM SPSS for Windows version 20.0 software (IBM Corporation, Armonk, NY, USA). Relationships between parameters were analyzed by Spearman rank correlation coefficients (ICCs). Test-retest reliability was evaluated by intraclass ICCs. The ICC values were interpreted as follows: >0.75 was excellent, 0.40-0.75 was fair to good, and <0.40 was poor.

Ten patients (47.6%) had diffuse and 11 (52.4%) had limited SSc. Medical Research Council dyspnea grades were as follows; nine patients (42.9%): grade I, eight patients (38.1%): grade II, three patients (14.3%): grade III, and one patient (4.8%): grade IV. Patients’ demographics and disease data are given in Table 1. All MAF subscales and FSS had moderate to good correlations with disability and QoL items (Table 2). However, SF-36 vitality which was frequently used as an index for fatigue in various studies did not have significant ICCs with MAF subscales and FSS. 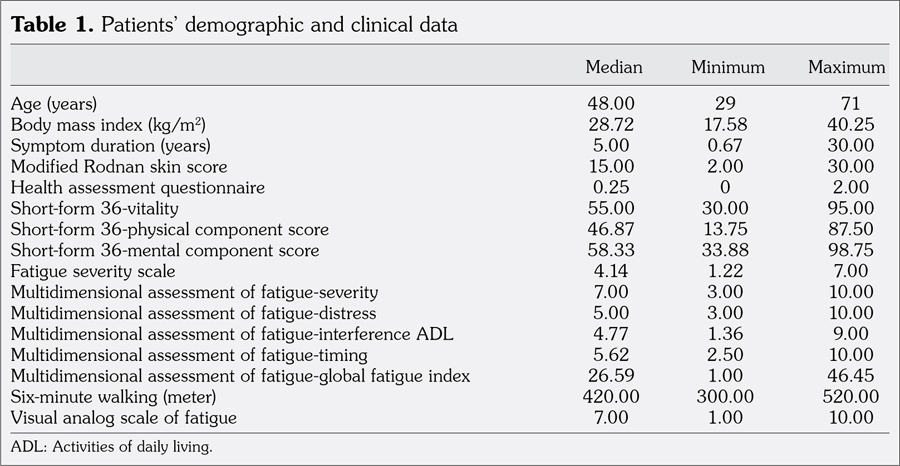 Our results revealed that FSS and MAF subscales have high reproducibility and significant correlation with QoL and disability scales in SSc. These results, to some extent, may suggest convergent validity of MAF subscales and FSS in SSc.

The vitality subscale of SF-36, which was frequently used as an index measure to evaluate severity of fatigue in various studies, did not have close relationship with MAF subscales and FSS in our study. Although this has been previously reported by Sandqvist et al.,(13) the small sample size of our study may have hampered more robust ICCs which may be considered as a limitation.

Fatigue is a common and disabling symptom in SSc.(4,14,15) Fatigue is associated with lower QoL and loss of physical functions, increased pain and depressive symptoms and worsening of daily living activities in patients with SSc.(15-17) Various questionnaires were used to evaluate fatigue in patients with SSc, including SF-36 vitality subscale and Functional Assessment of Chronic Illness Therapy scale, or MAF.(4,15,18) All these studies showed that fatigue is an integral part of the clinical picture in SSc and monitoring fatigue may also be important to assess the efficacy of any treatment in patients with SSc.

The major limitation of our study was the small number of patients with SSc. We excluded patients under treatment with anti-psychiatric drugs or membrane stabilizing agents which limited the sample size.

In conclusion, our study showed that FSS and MAF subscales have high reproducibility and moderate to good correlation with QoL and disability scales which, to some extent, may suggest convergent validity of MAF subscales and FSS in SSc. The incompatible nature and four- choice answering in two items of MAF-timing may be the underlying reason for lower relationships of this item with other parameters. The Turkish version of MAF and FSS may be used to assess fatigue in patients with SSc.