Rhabdomyolysis is a serious and potentially life-threatening syndrome due to rapid breakdown of skeletal muscle fibers. Acquired and genetic causes should be investigated when patients present with rhabdomyolysis. In this article, we report a patient of polymyositis associated with Sjögren’s syndrome, inducing rhabdomyolysis.

Rhabdomyolysis is a serious and potentially life-threatening syndrome, caused by rapid breakdown of skeletal muscle fibers, resulting in leakage of toxic muscle cell content into systemic circulation.(1,2) Approximately 26,000 cases of rhabdomyolysis are reported in the United States per year.(2) The clinical presentation of rhabdomyolysis is quite varied, ranging from asymptomatic elevation of serum creatinine kinase (CK) to cardiac arrhythmia, acute renal failure, and disseminated intravascular coagulation.(2) Acquired and genetic causes should be investigated in case of rhabdomyolysis. The most common acquired causes are substance abuse, medications, and trauma.(2,3) Other less frequent causes include infection, electrolyte disturbances, endocrine disorders, extreme physical exertion, body temperature changes, and metabolic myopathies.(2)

A 52-year-old African American male patient with a history of hypertension presented to hospital with complaints of blood in his urine and sudden onset of bilateral buttock, thigh, and shoulder muscle pains for the last week. Patient denied any upper respiratory symptoms, usage of medications, illicit drugs, supplements, or vitamins, recent prolonged immobilization, trauma, alcohol use or strenuous exercise. A written informed consent was obtained from the patient.

Despite treatment with aggressive hydration, CK further increased to 169.158 U/L with no improvement in symptoms over the next two days. Rheumatology was consulted for work-up of inflammatory myopathy as a cause of his rhabdomyolysis.

The patient had positive antinuclear antibody, with titer 1:1280 in a speckled immunofluorescence pattern and positive Sjögren’s syndrome antibody. The erythrocyte sedimentation rate was mildly elevated at 35 mm/hour and anti Jo-1 antibody was negative. These findings, along with the physical exam findings of lacrimal and parotid glands enlargement, were consistent with the Sjögren’s syndrome. The magnetic resonance imaging of bilateral thighs showed symmetric muscle edema of the thigh muscles (Figure 1). There was also moderate symmetric edema of the tensor fascia lata and gluteus maximus muscles. Given the symmetric muscle involvement and positive antinuclear antibody markers, rhabdomyolysis was deemed to be related to an inflammatory myopathy associated with Sjögren’s syndrome. 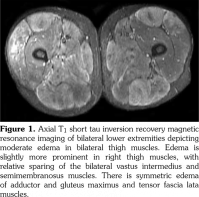 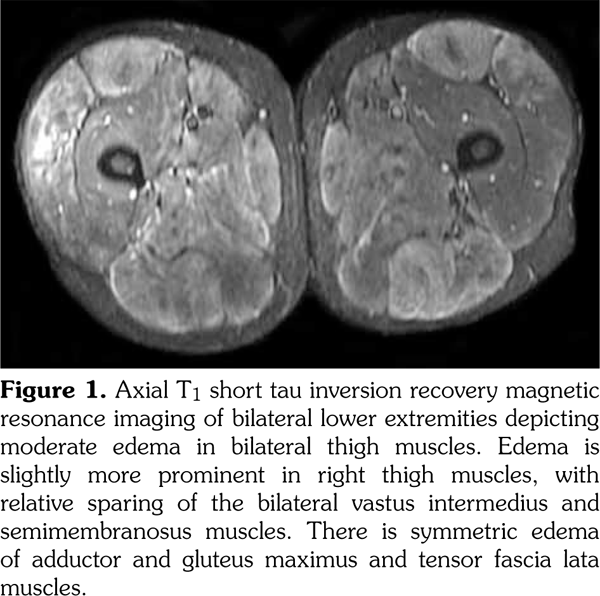 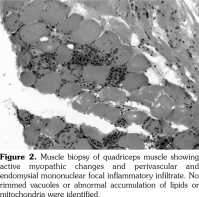 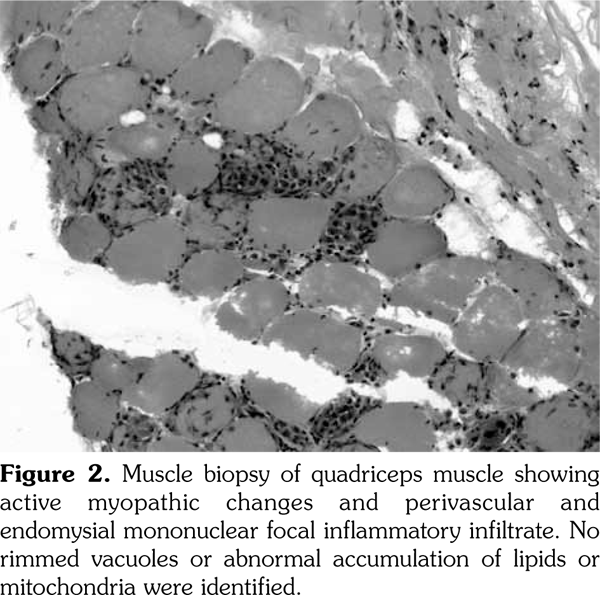 Patient was treated with 60 mg of prednisone per day for five days, with subsequent taper. He had a marked, rapid improvement of CK and symptoms upon initiation of steroids. At follow-up, less than four weeks after discharge, patient was tapered down to prednisone of 30 mg per day and had complete resolution of symptoms. Azathioprine, a steroid sparing agent, was administered while tapering prednisone.

Polymyositis is an idiopathic inflammatory myopathy characterized by muscle weakness, typically proximal and symmetric, elevation in muscle enzymes, and distinctive findings of electromyogram and muscle biopsy.(6,7) This disease may be associated with infections, sarcoid or connective tissues disease, such as Sjögren’s syndrome.(6,8-10) It is usually responsive to corticosteroids and immunosuppression.(7) Typical pathologic findings include endomysial mononuclear inflammatory infiltrate, which is CD8+ T cell predominant, major histocompatibility complex class 1 expression, and myofiber necrosis.(7)

Our patient presented with symptoms of rhabdomyolysis including myalgia and myoglobinuria and was subsequently diagnosed with polymyositis, based on the features of magnetic resonance imaging and muscle biopsy. Polymyositis has only rarely been described as a cause for rhabdomyolysis.(3-5) Typically, polymyositis is of gradual onset, with symptoms progressing over several months, rarely presenting as an acute episode as in our patient. To our knowledge, there are no documented cases of polymyositis associated with Sjögren’s syndrome, inducing rhabdomyolysis.

Though cases of inflammatory myopathy causing myoglobinuria and rhabdomyolysis are rare, it is important to have a high index of suspicion to avoid end organ damage. One should consider this diagnosis in patients who do not respond appropriately to supportive treatment and hydration, and have sustained myoglobinuria. It is also essential to take a good history and look for clues of autoimmune etiologies, such as Sjögren’s syndrome.