Objectives: This study aims to investigate whether the protein tyrosine phosphatase non-receptor type 22 (PTPN22) C1858T gene polymorphism plays a role in the pathogenesis of familial Mediterranean fever (FMF) through T-lymphocyte activation.
Patients and methods: We conducted a case-control study with 180 FMF patients (68 males, 112 females; mean age 38.2±1.6 years; range 16 to 81 years) and 184 healthy controls (86 males, 98 females; mean age 32.9±9.2 years; range 18 to 58 years). The PTPN22 C1858T polymorphism (rs2476601) was genotyped by polymerase chain reaction restriction fragment length polymorphism. In patients with FMF, clinical features, disease severity score, the frequencies of amyloidosis, positive family history, and Mediterranean fever gene mutations were determined.
Results: The frequencies of heterozygous genotype (CT) were 4.5% in FMF patients and 2.8% in healthy controls, respectively. The frequencies of polymorphic homozygous genotypes (TT) were 0.5% in both FMF patients and healthy controls. There were no statistically significant differences in the frequencies of CT and TT genotypes between FMF patients and healthy controls (odds ratio: 1.65, 95% confidence interval: 0.53-5.14, p>0.05 for CT genotype). The frequencies of clinical features, sex, amyloidosis, positive family history, Mediterranean fever gene mutations, and disease severity score were not significantly different between the patients.
Conclusion: The distribution of PTPN22 C1858T polymorphism did not reveal any association with FMF in a Turkish population.

Familial Mediterranean fever (FMF) is an autosomal recessively inherited auto-inflammatory disease seen frequently in communities around the Mediterranean Sea and characterized by periodic attacks of fever accompanied by inflammation localized to serosal surfaces, synovium or skin.(1,2) Pyrin or marenostrin are products of the Mediterranean fever (MEFV) gene, a regulatory protein that is mainly expressed in neutrophils. It has been revealed that pyrin plays a regulatory role in the inflammatory pathway by leading inactivation of activated neutrophils and apoptosis.

Pyrin dysfunction caused by upregulation of the MEFV gene is thought to be important in the etiopathogenesis of FMF.(3) Several studies have also demonstrated a T-helper 1 (Th1) polarization in the inflammatory response of FMF. These studies suggest that the T cell system is activated abnormally in FMF patients.(4-6)

The C1858T substitution resulting in an arginine to tryptophan change in codon 620 of the protein product has been shown to affect the protein-protein interaction with tyrosine kinase in T-cell activation, reducing the interaction between the protein and tyrosine kinase, resulting in an increased risk of inappropriate T-cell activation.(7) A functional polymorphism located in the coding region of protein tyrosine phosphatase non-receptor type 22 (PTPN22), the gene that encodes the intracellular PTPN 22 has been suggested to increase the risk for developing several autoimmune diseases, such as type I diabetes, systemic lupus erythematosus, Graves’ disease, Hashimato thyroiditis, and rheumatoid arthritis (RA).(8-11)

It is suggested that the PTPN22 gene polymorphism causes a tendency for T lymphocyte dysfunction in many autoimmune diseases. Although it is suggested that monocytes and macrophages are the main cells that are responsible for the disease, activated T lymphocytes may also contribute to the pathogenesis of FMF. In this study, we aimed to investigate whether PTPN22 C1858T gene polymorphism plays a role in the pathogenesis of FMF through T lymphocyte activation.

A case-control study was conducted at Ankara University Medical Faculty, Department of Rheumatology, Turkey, between March 01, 2008 and March 01, 2009. One-hundred eighty patients with FMF (68 males, 112 females; mean age 38.2±1.6 years; range 16 to 81 years) and 184 blood bank donors that served as healthy controls (86 males, 98 females; mean age 32.9±9.2 years; range 18 to 58 years) from the same hospital were included in the study. The mean disease duration was 113±87 months in patients with FMF. All patients and controls were enrolled with local ethics committee approval and provided their informed consent. The study was conducted in accordance with the principles of the Declaration of Helsinki. The diagnosis of patients with FMF was made using criteria suggested by Livneh et al.(12) The patients with autoinflammatory diseases, chronic inflammatory and autoimmune diseases except FMF were excluded. Detailed clinical features and demographic data were recorded for each patient. The presence of amyloidosis, positive family history of FMF, and MEFV gene mutations were also detected. Disease severity

was evaluated by using severity scoring system for FMF by Pras et al.(13) The frequencies of clinical features, amyloidosis, positive family history of FMF, MEFV gene mutations, and disease severity are shown in the Table 1. 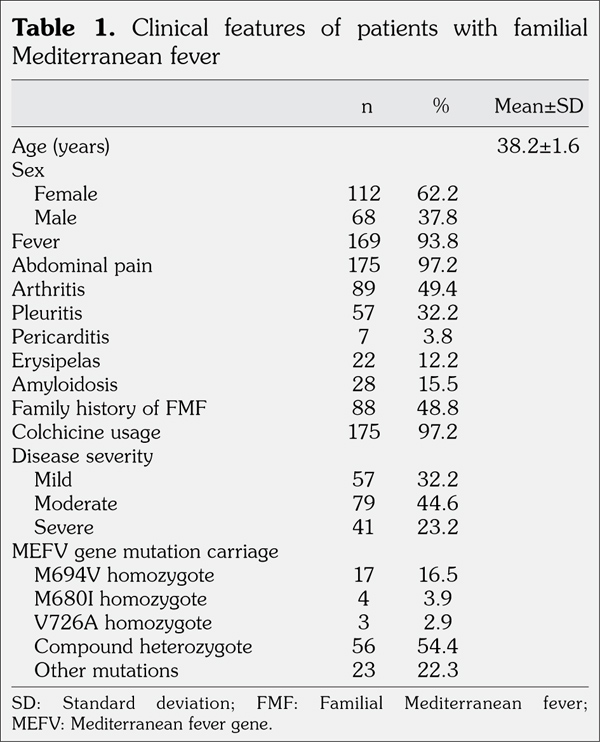 SPSS version 11.0 package program for Windows (SPSS Inc., Chicago, IL, USA) was used for the data analysis. Patients and controls were summarized for their genotypes, clinical features, and demographic properties as mean ± standard deviation for quantitative variables. Descriptive statistics were applied with mean ± standard deviation and median values for variables that did not fit to normal distribution. Mann-Whitney U and Chi-square tests were used for the analysis of non- normally and normally distributed independent variables, respectively. A p<0.05 was considered statistically significant.

In previous studies, PTPN22 gene polymorphism has been shown to be related with many T-cell mediated autoimmune diseases such as type I diabetes mellitus, systemic lupus erythematosus, Graves’ disease, Hashimato thyroiditis, and RA.(8-11) However, there are also some inflammatory diseases such as inflammatory bowel disease, ankylosing spondylitis, multiple sclerosis and Behçet’s disease with no association of PTPN22 C1858T polymorphism.(14-16) FMF is characterized by periodic attacks of fever accompanied by inflammation localized to serosal surfaces, synovium, or skin. It has been suggested that there seems to be an ongoing subclinical inflammation in FMF patients during an attack-free period.(17)

T-helper 1 type polarization has been implicated in the pathogenesis of FMF.(4) Musabak et al.(5) has previously demonstrated that T cells are abnormally activated in patients with FMF, either when symptomatic or between the attacks, and Th1 differentiation is the hallmark of inflammations in those patients. According to the study by Simsek et al.,(6) increased levels of interleukin-12 and interleukin-18 in patients with inactive disease imply that they seem to assist Th1 activation and subclinical inflammation persisting during the attack-free period of the disease. In this study, we examined the possible role of the PTPN22 gene polymorphism responsible for inappropriate T cell activation in patients with FMF. We did not find significant differences in the frequencies of CT and TT genotypes between FMF patients and healthy controls.

The genetic studies performed in various populations revealed that there are geographic differences in the frequency of PTPN22 C1858T genotypes. The frequency of PTPN22 1858T allele was highest in Finland (15.5%), Sweden (12%), China (8%), Spain (6%), and Italy (2%) whereas PTPN22 1858 T allele was very rare in Asian (9%), African (3%), and American (8%) communities.(18) Furthermore, PTPN22 1858 CT and TT genotype frequencies in both several autoimmune diseases and healthy controls in European and North American ancestry are higher than those in Asian populations.(8-11,19-21) We previously reported that the frequency of PTPN22 C1858T CT polymorphism in a Turkish population (8.4% in RA patients and 5.4% in healthy controls) was also lower than those in Caucasian populations. Moreover, the TT genotype was absent in both RA patients and the healthy controls.(22) Similarly, previous studies conducted in Turkish populations showed that the frequency of the PTPN22 polymorphism is relatively low;(16,22) in this study, the frequencies of PTPN22 1858 CT and TT polymorphism in a Turkish population (in healthy controls 2.8% and 0.5%, respectively; in FMF patients 4.5% and 0.5%, respectively) were also lower than those of Caucasian populations. In this study, PTPN22 gene polymorphism was not found to be a factor that could play a role in the pathogenesis and clinical course of FMF. Although there was no association between FMF and PTPN22 gene polymorphism in our study, the Th1-mediated inflammation in FMF could be caused by other factors independent of PTPN22- related pathways.

However, this study has some limitations. First, studies of polymorphism require larger number of patients and controls compared to that of our study. Second, we used blood bank donors as healthy controls and this may have been a factor posing a risk of selection bias.

In conclusion, the distribution of PTPN22 C1858T polymorphism did not reveal any association with FMF in a Turkish population. Further studies are needed to evaluate the relationship between PTPN22 C1858T gene polymorphism and FMF.

The study is supported by the Ankara University Research Fund.