An Unusual Coexistence of Progressive Pseudorheumatoid Dysplasia and Relapsing Polychondritis

Progressive pseudorheumatoid dysplasia (PPD) is a rare autosomal recessive inherited disease, leading to restricted mobility of multiple peripheral joints, osseous swelling of the interphalangeal (IP) and other major joints and dysplastic abnormalities of spine including irregularity in vertebral end-plates, short pedicles, and platyspondyly.(1) Clinical symptoms may develop in early childhood. Patients suffer from stiffness/ swelling of multiple joints without signs of systemic or synovial inflammation. PPD is commonly misdiagnosed as “chronic juvenile polyarthritis with Scheuermann disease”. It differs from the seronegative polyarticular rheumatoid arthritis (RA) and other spondyloarthropathies by the absence of inflammatory changes and destructive arthropathy, and the presence of dysplastic bony changes.(2)

Relapsing polychondritis (RP) is a rare episodic and progressive inflammatory disease of cartilaginous and proteoglycan rich structures. RP associated abnormalities include particularly the involvement of elastic cartilage of the ear and nose, hyaline cartilage of peripheral joints, and cartilage of tracheobronchial tree. Also, inflammation of other structures such as the eyes, heart, blood vessels, and kidney may be present.(3) About 30% of patients with RP have associated autoimmune disorders, such as systemic connective tissue disease, vasculitis or myelodysplastic syndrome.(3,4)

In this article, we report an unusual case of coexisting PPD and RP. To our knowledge, this association in a patient has not been previously reported in the literature.

A 27-year-old male patient with a nine-year history of RP admitted to our Rheumatology Clinic with polyarthritis. His first symptoms began as painless swelling of IP joints of hand at his late childhood. During the subsequent years, joint mobility decreased and spread to other joints, including bilateral wrist, hip, ankle, and foot. He developed painful deformities particularly in his hand and foot joints. Also, he had recurrent episodes of inflammation on his ears and nose (he declared at least three clinically evident episodes). His symptoms related to RP were in remission for the last four years. He had a family history of consanguineous marriage and similar complaints were affecting his sister who had restricted movements and deformities in several joints (particularly hand, wrist, elbow and hip joints). Total hip replacement was performed on her right hip joint due to pain, walking difficulty, and restricted joint motions at age of 28. We were unable to examine his sister, since she refused to visit our hospital due to social problems. A written informed consent was obtained from the patient. 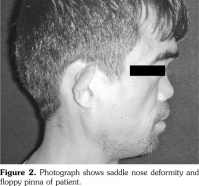 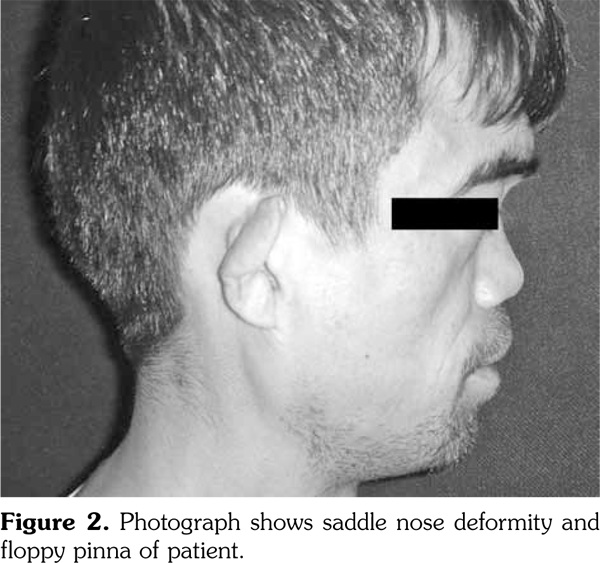 Radiographs of the hands showed enlargement of metaphyses, flattening of epiphyses, and narrowing of joint spaces with no erosions. Lateral radiograph of the foot revealed bilateral large ossified trigonum attached to the talus (mega os trigonum) (Figure 3). Radiographs of the spine showed increased kyphosis, generalized platyspondyly particularly at the thoracolumbar junction, and irregularity of the vertebral end- plates (Figure 4). Magnetic resonance imaging of thoracolumbar spine demonstrated irregularity in vertebral end-plates, multiple disk herniations, and platyspondyly (Figure 5). Dynamic contrast- enhanced magnetic resonance imaging of the wrist did not reveal any signs of synovial inflammation. 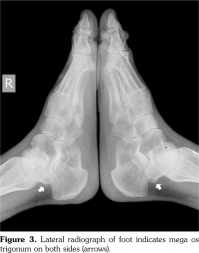 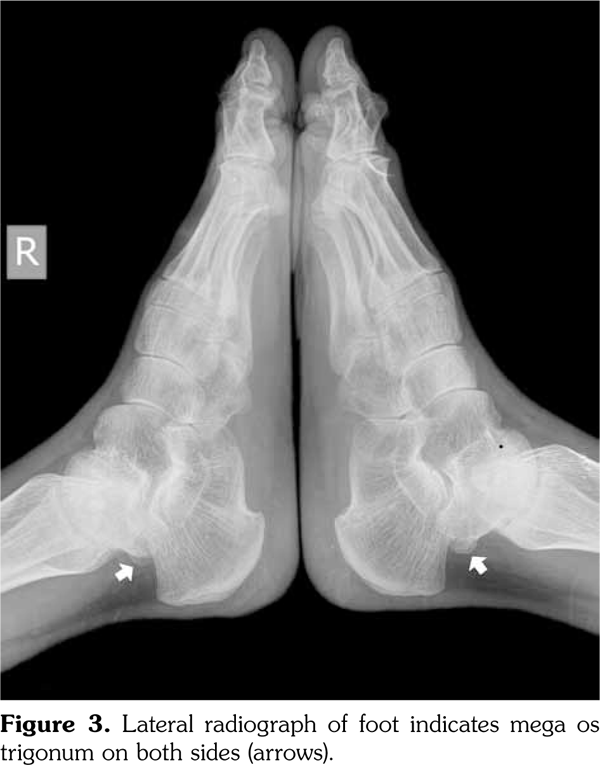 Figure 4. Anteroposterior (a) and lateral views (b) of thoracic spine show platyspondyly, loss of height in vertebral bodies, and kyphoscoliosis.
× 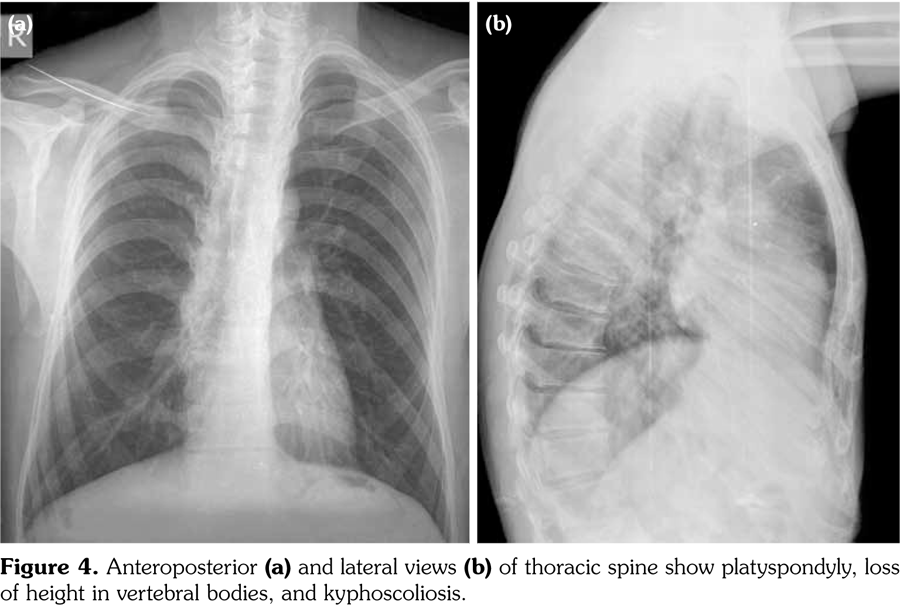 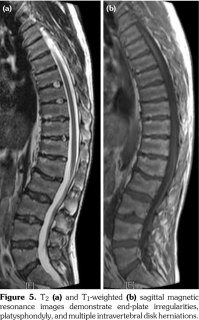 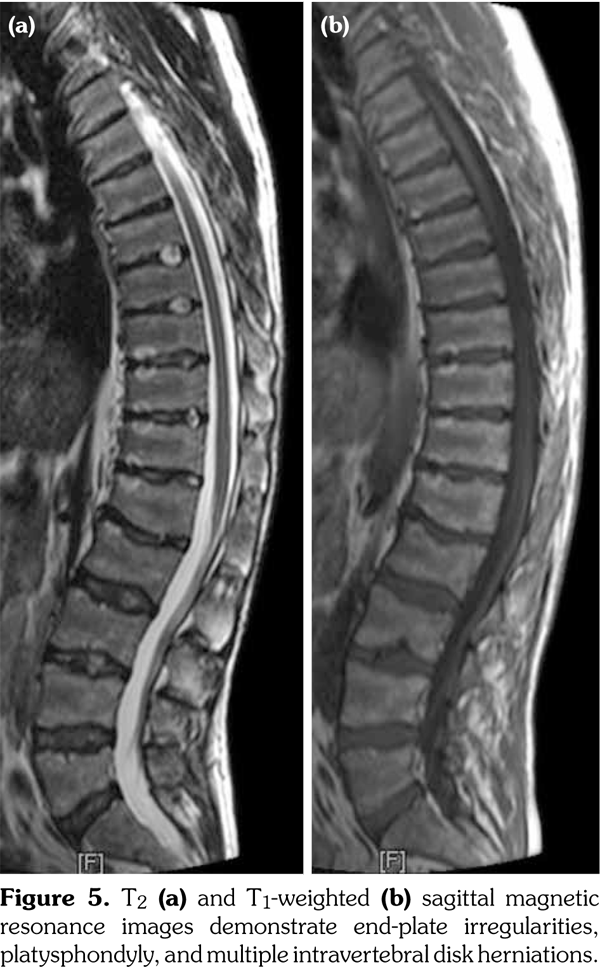 Based on the clinical and imaging evaluations, the patient was diagnosed as PPD coexisting with RP. He was treated with non-steroid anti- inflammatory drugs, physical therapy, and rehabilitation interventions. He was also informed about the disease course, joint protection, and therapeutic exercises.

Progressive pseudorheumatoid dysplasia is a rare inherited skeletal disease characterized by generalized bone/cartilage dysplasia, abnormalities in the vertebrae, and progressive arthropathy without systemic/synovial inflammation.(5,6) It differs from RA by the absence of synovitis, pannus and other inflammatory changes, and existence of dysplastic bony changes on radiographs. It also does not respond to usual anti-rheumatic treatments.(1) Although not a sine qua non for diagnosis, genetic testing could be performed in PPD. Mutations in the Wnt1- inducible signaling pathway protein 3/(WISP3) gene is found to be associated with PPD.(7) WISP3 gene encodes a member of the connective tissue growth factor family known to be mostly the extracellular matrix-associated proteins related with regulation of cell migration, proliferation, and differentiation.(8,9) In our patient, we were unable to perform this genetic testing because of the cost, yet our clinical and imaging features were sufficient for clear diagnosis.

Clinical features of PPD have been described in several reports.(9-11) The radiographic features include varying degrees of epiphyseal involvement with enlargement of the epi-metaphyseal region, progressive joint narrowing, generalized platyspondyly, multiple intervertebral herniations, kyphoscoliosis, mega os trigonum and bone destruction with aging.(2,6,10) Our patient had progressive restriction of several joints, IP enlargements, dysplastic bone/cartilage changes, mega os trigonum and platyspondyly, with normal acute phase reactants. The presence of dysmorphic features and the absence of inflammatory signs should alert the physicians for the possible hereditary dysplasias like PPD.

Relapsing polychondritis is a rare autoimmune disorder of unknown etiology, characterized by episodic inflammation/destruction of cartilaginous structures including the ear, nose, peripheral joints and tracheobronchial tree.(4,12) Immune damage may also spread to non-cartilaginous tissues like kidney, blood vessels, eye, and heart. Although its prevalence is unknown, incidence is reported at 3.5 cases per million.(12) Over 30% of patients with RP have an associated systemic disorder, usually an autoimmune/hematologic disorder including systemic vasculitis, RA, systemic lupus erythematosus, or Sjögren’s syndrome.(3,13,14) Our case is interesting since coexisting RP and PPD in the same patient has not been previously reported in the literature.

Articular manifestations may occur in 70% to 80% of patients with RP. The most frequent pattern is migratory, seronegative, episodic, and asymmetric inflammatory oligo/polyarthritis. Articular lesions are generally non-erosive/non- destructive, unless the presence of underlying RA. Arthritis associated with RP may affect all synovial joints; however, metacarpophalangeal, IP and knee are the most commonly affected joints. Plain radiographs typically illustrate mild joint space narrowing and juxtaarticular osteoporosis. In patients with RP, cartilage damage may also lead to pectus excavatum deformity.(15) Despite occurrence of seronegative, non-erosive, non- inflammatory polyarthritis, RP does not cause abnormalities in vertebrae, dysplastic bony changes, and progressive arthropathy. However, presences of chronic polyarthritis and progressive loss of joint motions with enlargement of the metacarpal and phalangeal epiphyses, mega os trigonum and spinal abnormalities including platyspondyly make our case an exceptional and interesting one.

In conclusion, we would like to indicate that a combination of polyarthritis and dysplastic abnormalities of the spine and bony changes without systemic/synovial inflammation should alert clinicians for a possible diagnosis of rare inherited diseases like PPD. Furthermore, with this case report, PPD should be added to the list of diseases potentially coexisting with RP.