Hearing impairment (HI) is recognized as an important cause of disability strongly associated with older age, noise exposure, and low income.(1,2) Diabetes mellitus, hypertension, and smoking are traditional cardiovascular risk factors considered as a contributing factor of HI among adults.(2-6) HI may

Rheumatoid arthritis (RA) patients have higher frequency of HI than healthy controls (42% vs. 15.9%).(7) RA is a disease characterized by inflammation of the synovial membrane of the diarthrodial joints, which include arthrodesis of the middle ear, (incudomalleolar and incudostapedial joints) causing CHI in up to 1.9% of the cases.(4) Extra-articular involvement may also affect the auditory system targeting the inner ear, causing SNHI in 22% to 43% of the patients.(4-10)

Hearing impairment in RA is generally underdiagnosed; symptoms are progressive and patients are not aware of the damage until it interferes with their usual activities.(5,6) Despite of the increasing number of research about this topic, there is no clear evidence indicating that RA per se might be a direct cause of HI since the physiopathology remains unclear.(4,7,11-13) There is no consensus about methods to perform, when to screen for HI in RA patients with audiometric and clinical methods, or usefulness of these methods.

Recognized causes of HI related to RA are disease activity, vasculitis, neuritis, immune-complex mediated antibodies directed against epitopes, and ototoxicity caused by medications.(14,15) The majority of the risk factors for SNHI reported in the literature are related to the cardiovascular system, as the inner ear may be vulnerable to circulatory alterations that can affect the labyrinthine artery.

A structured questionnaire was applied to all subjects to gather demographic information, medical history, date of diagnosis, and current treatment. Disease activity was evaluated using the disease activity score in 28 joints (DAS28) with C-reactive protein (CRP).(17)

Impedance audiometry was measured using an IA-AZ-7 model tympanometer (Middelfart, Denmark) calibrated to International Organization for Standardization standards. Tympanograms were classified according to Jerger as

The study protocol was approved by the Institutional Review Board of “Hospital Civil Juan I. Menchaca”, registered under the number 1068/10 and performed in accordance with the ethical standards laid down in the Declaration of Helsinki. A written informed consent was obtained from each patient.

Table 1. Hearing impairment according to clinical and demographic characteristics in rheumatoid arthritis patients
× 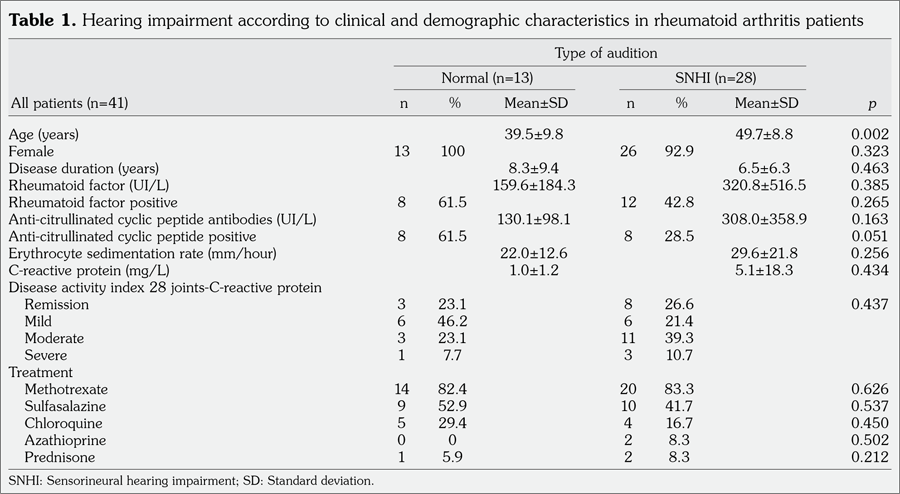 Patients with SNHI were older than patients with normal audition (49.68±8.8 vs. 39.54±9.8, p=0.002). No statistical differences were found between normal audition and SNHI groups, although higher titles of RF, anti-CCP, ESR and CRP were detected in the SHNI group. No statistical significant relationship was found between positivity for RF and anti-CCP between SNHI and normal hearing RA groups (data not shown). 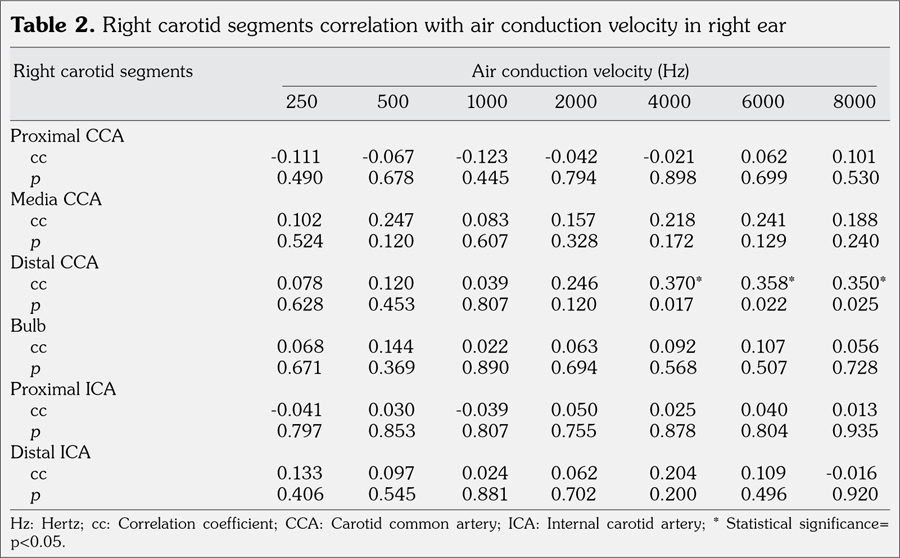 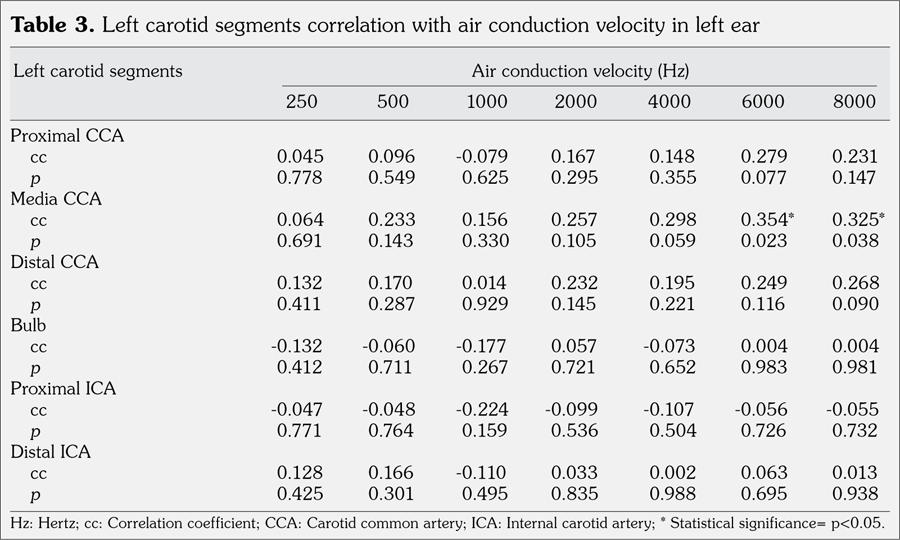 The pathogenesis of HI in RA has been a matter of debate for decades, and today, it is still poorly understood. Causes of HI have been described as multifactorial in the previous studies. SNHI seems to be the hearing damage most frequently found in RA patients, and it has been attributed to disease activity, older age and extra-articular involvement such as vasculitis.(8) In addition, majority of drugs used in the treatment of RA such as non-steroidal anti-inflammatory drugs and disease-modifying antirheumatic drugs, given to patients with more active disease, have also been recognized as potential contributors to SNHI.(15,20-22) Thus, an association between disease activity and HI has not been not consistent.

Pascual-Ramos et al.(5) in a previous report demonstrated that 24% of 113 RA patients had HI. In a follow-up of their patients years later, they found in the adjusted Cox proportional model that cumulative DAS28-CRP was the only variable to predict incidental HI (odds ratio: 1.8, 95%; confidence interval: 1.1-2.7; p=0.01). Almost 13% of RA patients with short disease duration and low disease activity developed incidental HI within one year.(6) In 2005, Takatsu et al.(7) reported the frequency of SNHI in RA patients to be higher than normal controls (36.1% vs. 13.9%) and associated SNHI to ESR (p<0.05), plasma interleukin-6 (p<0.05), and plasma matrix metalloproteinase-3 (p<0.001) suggesting that systemic inflammatory process might trigger HI. On the other hand, Murdin et al.(4) did not find any relationship between hearing thresholds and markers of disease activity or other rheumatological parameters.

Cardiovascular disease in RA patients reduces life expectancy between six and seven years,(23) due to myocardial infarction, stroke, hypertension, and subclinical atherosclerosis.(19) In the last decade, RA has been recognized as a cardiovascular risk factor per se.(13) We have previously reported that cIMT correlates with levels of anti-CCP antibodies (r=0.513, p=0.001), CRP (r=0.799, p<0.001), tumor necrosis factor alpha (r=0.642, p=0.001), and interleukin-6 (r=0.751, p<0.001) in RA patients. In multiple regression analysis, cIMT was independently associated with CRP (p<0.001) and anti-CCP antibodies (p=0.03).(19) Gökmen et al.(24) have found that cIMT was positively correlated with the number of metabolic syndrome risk components in RA patients. They have shown positive correlations between cIMT and age, ESR, CRP, and systolic and diastolic blood pressures. On the other hand, cIMT has been associated with homocysteine levels in RA patients treated with methotrexate.(25) This increased risk is not exclusive to RA patients, increased cIMT has been reported in female patients with fibromyalgia.(26)

Hearing impairment may be associated with vascular damage in RA patients. Subclinical atherosclerosis may reduce the normal blood flow of brain circulation and this reduction may compromise the inner ear cells which are more sensitive to hypoxemic risk, leading to changes in the perception of high frequency sounds. Another possible explanation is that thickening of the intima-media carotid arteries may affect the inner ear blood flow, especially the labyrinthine artery, leading to SNHI by the same mechanism mainly at high frequencies. To our knowledge, we have shown for the first time that RA patients with SNHI had increased intima-media thickness in the carotid arteries. In a study of 381 consecutive patients who underwent coronary angiography for symptoms suggesting ischemic heart disease, Erkan et al.(27) found that the angiographic severity and extent of coronary artery disease are significantly and independently correlated with the degree of hearing loss. There was a statistically significant positive correlation between the degree of hearing loss at all frequencies analyzed (250, 500, 1,000, 2,000, 4,000 Hz) and the Gensini score (p<0.05 for all frequencies). Furthermore, in a case control study, Ciccone et al.(28) evaluated 29 patients with idiopathic sudden sensorineural hearing loss and 29 controls and showed that the two groups did not differ with regards to cIMT and other cardiovascular risk factors; however, flow-mediated dilation of the brachial artery predisposed individuals to develop idiopathic sudden sensorineural hearing loss (p=0.03, odds ratio: 1.4).

There is evidence to suggest that hearing and vestibular function might be influenced by disease activity and autoimmune processes. RA patients may develop autoimmune inner-ear disease due to SNHI. There are some reports indicating that anti-tumor necrosis factor alpha agents (etanercept, adalimumab and infliximab) may offer additional treatment options for patients with autoimmune hearing loss.(20-22)

Hearing impairment in RA is a subclinical comorbid state. Since most of the patients are not aware of their HI and have no clinical complaints, it is important that physicians consider hearing damage in these patients.(2,3,14)

Despite of the increasing number of research on this topic, there is no clear evidence for the direct cause of HI, since the physiopathology remains unclear.(2,6,11) There is no consensus about audiometric evaluation methods and clinical screening in RA patients tested for HI. In this context, we are unable to differentiate the importance of RA itself and other comorbidities causing HI.

Our study has some limitations. Due to the cross sectional methodology of the study, we were unable to discriminate the impact of the variables across time in SNHI. And because of the small sample size, we might have missed a positive association of clinical and laboratorial variables with SNHI.

In conclusion, to our knowledge, we reported for the first time a positive association of subclinical atherosclerosis with SNHI in RA patients. As we have shown, auditory symptoms are common features associated with the disease. Follow-up appointments should be regarded as opportunities to enquire about hearing loss. Referral for screening and early treatment or rehabilitation increases the likelihood of a successful outcome. Further studies are required to elucidate the principal mechanism of SNHI, measure the labyrinthine artery by magnetic resonance imaging or computed angiotomography, and address cardiovascular risk factors and their impact in HI in RA patients.