Familial Mediterranean fever is an autosomal recessive disease characterized by recurrent episodes of fever, peritonitis, synovitis, pleuritis, and erysipelas-like skin lesions. Sjogren’s syndrome is a chronic autoimmune disorder characterized by dry eyes, dry mouth, and musculoskeletal involvement. Ankylosing spondylitis is an autoinflammatory rheumatic disease which affects mainly the axial skeleton. To our knowledge, coexistence of familial Mediterranean fever with ankylosing spondylitis and Sjogren’s syndrome has not been reported previously in the literature. In this article, we report an unusual case of three autoinflammatory diseases in one patient.

Familial Mediterranean fever (FMF) is an autoinflammatory disorder which is caused by mutations in Mediterranean fever (MEFV) gene which is located on the short (p) arm of chromosome 16.(1) It is common in Turkish, Armenian, Arabic, and Sephardic Jewish populations.(2) FMF is characterized by recurrent episodes of fever, peritonitis, synovitis, pleuritis, and erysipelas-like skin lesions.(3)

Ankylosing spondylitis (AS) is a common autoinflammatory rheumatic disease which affects axial skeleton, causing structural and functional impairment and deterioration in quality of life.(4) The etiology and pathogenesis of AS are not clearly known. Immune mechanisms involving human leucocyte antigen (HLA)-B27, inflammatory cellular infiltrates, cytokines such as tumor necrosis factor-alpha, and interleukin (IL)-10 play role in AS.(5)

Sjogren’s syndrome (SS) is a chronic autoimmune disorder of exocrine glands with associated lymphocytic infiltrates of the affected glands. It can present as an entity by itself, or in addition to another autoimmune disease including rheumatoid arthritis, systemic lupus erythematosus, or systemic sclerosis.(6,7) In this article, we report the coexistence of FMF, AS and, SS and examine the immunopathogenetic mechanisms for possible associations among these autoinflammatory diseases.

A 34-year-old female patient with a 14-year history of FMF was admitted to our outpatient clinic with complaints of severe pain in low back and hips. The patient presented with a two-year history of inflammatory low back pain and morning stiffness lasting more than one hour. In her medical history, she was diagnosed with FMF 14 years ago when she was evaluated for recurrent attacks of fever, peritonitis, ankle joint arthritis, and erysipelas-like skin lesions on the soles of her feet. Genetic analysis had revealed two homozygous mutations (M694V and R202Q) of the MEFV gene, confirming the diagnosis. She had been on colchicine treatment for 14 years. The patient reported that she was diagnosed with SS five years ago when she complained of dry mouth and eyes. At the time, antinuclear antibody was positive at 1:320 granular pattern. Anti-Ro/SSA (Anti-Sjogren's Syndrome A), anti-La/SSB (Anti-Sjogren's Syndrome B) and anti-Ro52 antibodies were also positive. Salivary scintigraphy showed reduced concentration, which was consistent with findings of SS. Hydroxychloroquine 400 mg/day was added to her medical therapy. The patient did not report a family history for FMF, AS, or SS. 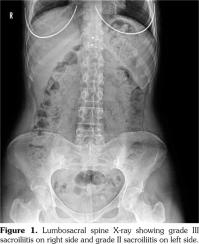 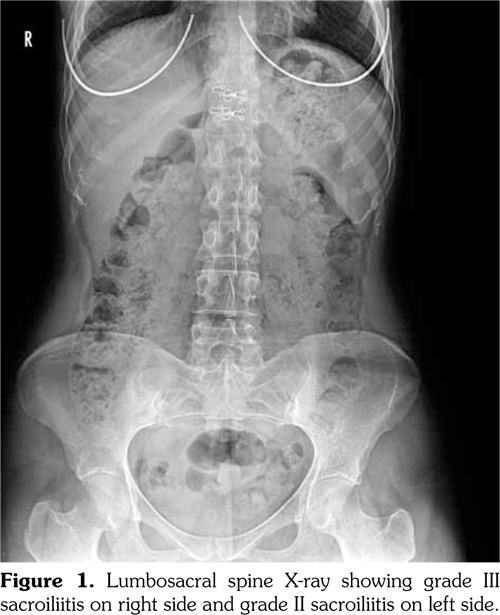 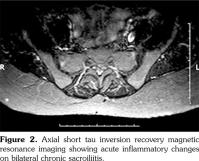 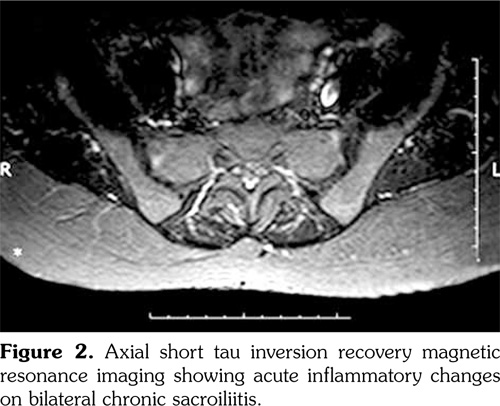 To the best of our knowledge, two cases of coexistence of FMF and SS have been reported in the literature. Tanaka et al.(8) reported a 42-year-old female patient with a seven-year history of FMF who complained of dry mouth and dry eye. She was homozygous for pyrin M6491 mutation and experienced recurrent attacks of chest pain, fever, and knee arthritis. They did not detect anti-Ro and anti-La, but antinuclear antibody was positive at high titers (1:1,280). Schirmer’s test was positive. Findings of sialography were consistent with SS. Similarly, Kobak et al.(9) reported a 42-year-old male patient with a 20-year history of FMF, who presented with complaints of dry eyes and mouth. In this patient, Anti-Ro and anti-La were negative, but antinuclear antibody was positive at 1:160. Minor salivary gland biopsy showed grade IV sialoadenitis according to Chisholm grading criteria. His genetic analysis revealed compound heterozygosity for M694V mutation. There is some evidence about the concurrence of FMF and SS. Haznedaroglu et al.(10) reported increased IL-18 levels in the patients with FMF. They suggested that IL-18 might contribute to cytokine network in the inflammatory cascade of FMF. Also, Tanaka et al.(8) detected higher IL-18 level in their patient with concomitant SS and FMF, and reported that FMF-related dysregulated IL-18 production and chronic inflammation might be linked with the occurrence of SS.

Furthermore, there is some evidence about the coexistence of FMF and AS. In the study of Akar et al.,(11) conducted in 201 Turkish patients with FMF, 7.5% of the patients fulfilled modified New York criteria for AS. Surprisingly, none of FMF patients with AS was HLA-B27 positive. Similarly, HLA-B27 was negative in our patient. They reported that factors other than HLA- B27 played role in the association between AS and FMF. Also, frequency of M694V mutation was higher in FMF patients with radiographic sacroiliitis. They suggested that MEFV gene variations might be the possible pathogenic link among these diseases. On the other hand, Yigit et al.(12) found significantly higher rates of MEFV mutations in AS patients when compared with healthy controls, of which the most common was M694V mutation. They suggested that MEFV gene mutation might be associated with a predisposition to develop AS.

To our knowledge, this is the first reported case of FMF with AS and SS. Our patient fulfilled Livneh diagnostic criteria for FMF,(13) American-European Consensus Classification Criteria for SS,(14) and modified New York criteria for AS.(15)

Familial Mediterranean fever may coexist with other rheumatic diseases such as AS and SS. Further studies are needed to investigate the role of MEFV gene mutations in autoimmune disorders.