Systemic sclerosis (SSc) is a systemic connective tissue disease characterized by fibrosis of the skin and visceral organs, such as kidneys, lungs, and heart. Varied cardiovascular complications may appear in SSc, most commonly dysrhythmias and pulmonary hypertension.(1-3) Cardiovascular involvement has been demonstrated to be one of the major causes of mortality in SSc and may occur in up to 70% of patients according to autopsy reports.(4,5) The major causes of cardiovascular death in patients with SSc are refractory heart failure and dysrhythmias.(6)

Between January 2014 and May 2015, the study included 65 consecutive patients (8 males, 57 females; mean age 49.8 years; range 20 to 77 years) with SSc and 63 age and sex similar control subjects (8 males, 55 females; mean age 49.3 years; range 20 to 77 years). All patients met American Rheumatism Association’s preliminary criteria for diagnosis of definite scleroderma and 2013 American College of Rheumatology/European League Against Rheumatism Classification criteria for SSc.(15,16) Patients were classified as having diffuse or limited cutaneous SSc according to LeRoy Classification criteria.(17) Patients with SSc were screened in terms of disease duration (defined as interval between date of diagnosis and inclusion into study) and Raynaud’s phenomenon. All patients were examined to be in sinus rhythm and were asymptomatic in terms of cardiac symptoms. Patients and control subjects with diabetes mellitus, hypertension, valvular heart disease, coronary artery disease, wall motion abnormalities with left ventricular ejection fraction below 50%, severe pulmonary disease, malignancy, kidney/hepatic failure, incomplete/ complete bundle branch block, atrial fibrillation, and paced rhythm were excluded. Baseline demographic and clinical characteristics were noted. Written informed consent was obtained from each patient. The study was in compliance with the principles outlined in the Declaration of Helsinki and approved by the Local Ethics Committee.

The 12-lead electrocardiogram (ECG) was recorded at a paper speed of 50 mm/second (Hewlett Packard, Page-writer, USA) in the supine position. ECGs were performed while the patient was at rest and at 8:00-10:00 AM in the morning. All of the ECGs were scanned and transferred to a personal computer to decrease the error measurements, and then used for x400% magnification by Adobe Photoshop software. ECG measurements of QT and Tp-e intervals were performed by two cardiologists who were blinded to the patient data. Subjects with U waves on their ECGs were excluded from the study. A mean value of three readings was calculated for each lead. The QT interval was measured from the beginning of the QRS complex to the end of the T wave and corrected for heart rate using the Bazett’s formula: cQT = QT√ (R-R interval). The Tp-e interval was defined as the interval from the peak of T wave to the end of T wave. Measurements of the Tp-e interval were performed from precordial leads.(10) The Tp-e/QT ratio was calculated from these measurements. Interobserver and intraobserver coefficients of variation were 2.4% and 2.8%, respectively.

Statistical analysis
For statistical analysis, IBM SPSS version 20.0 Statistical Package Program for Windows (IBM Corporation, Armonk, NY, USA) was used. Kolmogorov-Smirnov test was used to test normality of distribution. Quantitative variables with a normal distribution were specified as the mean ± standard deviation. Categorical variables were shown as number and percentage values. Differences between groups were evaluated by using Student’s t test. Categorical variables were compared with Chi-square test. Pearson correlation analysis was performed to examine the relationship between Tp-e interval, Tp-e/QT ratio and Tp-e/QTc, and other variations. A p value of <0.05 was accepted as statistically significant.

Baseline clinical characteristics and laboratory parameters of the study groups were listed in Table 1. There were 12 diffuse and 53 limited cutaneous SSc patients. There was no statistically significant difference between groups in terms of age, sex, and basal laboratory findings (all p>0.05), except for high-density lipoprotein cholesterol level which was significantly lower in patients with SSc than control subjects (p=0.017). Mean disease duration of patients was 8.1±7.5 years. 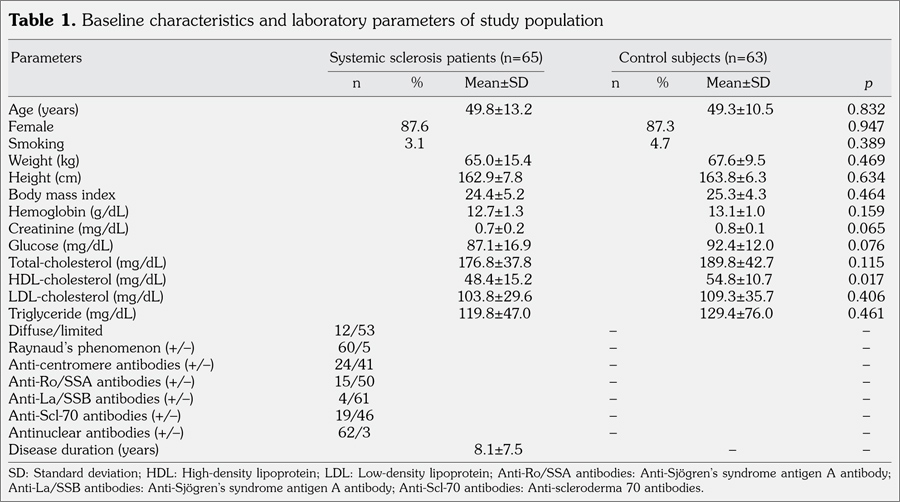 The ECG and echocardiographic findings were presented in Table 2. There was no difference between the two groups in terms of left ventricular ejection fraction (p=0.108). Tp-e intervals, QT intervals, QTc intervals, Tp-e/QT ratios, and Tp-e/QTc ratios were significantly higher in patients with SSc than control subjects (all p<0.01). Besides, there was no difference between patients with diffuse and limited cutaneous SSc in terms of ECG and echocardiographic findings (Table 3). In correlation analysis, there were no correlations between Tp-e intervals, Tp-e/QT, and Tp-e/QTc ratios with disease duration and anti-Sjögren’s syndrome antigen A antibody levels in patients with SSc (p>0.05).

There are some studies investigating the association between SSc, coronary fibrosis, and atherosclerosis.(18-20) Microvascular dysfunction and fibrosis has a major role in the pathogenesis of the SSc, especially in cardiac complications.(2,3) Myocardial fibrosis is characteristic for heart involvement in SSc and observed in 50% to 70% of patients.(4) Fibrosis may be a result of recurrent myocardial ischemia called myocardial Raynaud’s phenomenon, similar to primary Raynaud’s phenomenon. Researchers showed lesions in microvascular arteries of myocardium like in the peripheral arterioles of primary Raynaud’s phenomenon to support this probability.(21,22) Myocardial fibrosis plays a major role in the development of ventricular arrhythmias and makes left ventricle susceptible to by damaging electrical conduction, stimulating the development of re-entry circuits, and augmenting ventricular refractoriness and excitability of myocytes.(23,24)

QT dispersion was described as a sign of increased dispersion of repolarization but finally lost its importance as a faulty concept.(8,29) Recently, the Tp-e interval and Tp-e/QT ratio have been used as novel markers of increased dispersion of ventricular repolarization.(13,14,30) Prolonged Tp-e interval was related with increased mortality in long QT syndrome, Brugada syndrome and in patients with acute ST-segment elevation myocardial infarction.(14) Nevertheless, Tp-e interval is affected by alterations in heart rate and body weight.(9) In recent studies, the Tp-e/QT ratio was suggested to be a more precise measure for the dispersion of ventricular repolarization than QT dispersion, QTc dispersion and Tp-e intervals, and to be independent of variations in heart rate.(9,13) The literature indicates the applicability of Tp-e/QT ratio as a potency significant index of arrhythmogenesis, under the conditions of short, normal, and long QT intervals.(14) Also, several studies have demonstrated the relationship between Tp-e/QT ratio and rheumatic diseases such as rheumatoid arthritis and ankylosing spondylitis.(31,32) Myocardial fibrosis is well known result of SSc. Therefore, alterations in myocardial tissue may cause heterogeneity in ventricular repolarization and this may also result in significant ventricular arrhythmias in patients with SSc. Similarly, we have found significant differences in Tp-e interval, QT interval, QTc interval, Tp-e/QT and Tp-e/QTc ratios between patients with SSc and the control group. Tp-e interval, QT interval, QTc interval, Tp-e/QT and Tp-e/QTc ratios were significantly higher in patients with SSc.

These results may contribute to the pathophysiological mechanisms of the increased prevalence of arrhythmias by specifying increased ventricular repolarization heterogeneity in patients with SSc. Increased incidence of ventricular arrhythmias may be clarified by prolonged transmural dispersion in these patients.

Our study has some limitations. First is its relatively small sample size. Second, it has a cross-sectional design and lacks follow-up of patients. Also, since we had no data on Rodnan skin scores, disease activity index, and disease severity scale, we were unable to evaluate the association between ECG findings and these indexes. Additionally, due to diurnal variation of ECG parameters in a day, 24-hour Holter ECG

recording may be more valuable for evaluating dispersion of ventricular repolarization. We were unable to evaluate the relationship between ventricular arrhythmias and Tp-e interval and Tp-e/QT ratio. Therefore, long-term follow-up and large-scale prospective studies are needed to investigate the predictive value of the Tp-e interval and Tp-e/QT ratio in patients with SSc.