Synovitis, acne, pustulosis, hyperostosis, and osteitis (SAPHO) syndrome is a spectrum of inflammatory disorders including mainly rheumatologic and dermatological symptoms. In this article, we report a 50-year-old male patient of SAPHO revealed by spondylodiscitis, complicated by severe destruction, and kyphotic deformity leading to paralysis. Diagnosis was based on the association of sternoclavicular pain, palmar and plantar pustulosis, and radiological signs of inflammatory spondylodiscitis and vertebral osteitis. Computed tomography-guided discovertebral biopsy demonstrated nonspecific inflammation and culture of the specimen was negative. Nonsteroidal antiinflammatory drug treatment was initiated. One year later, the patient presented with spinal cord compression. The paralysis improved by surgery, and the patient recovered motor functions. The occurrence of spinal cord compression in SAPHO syndrome is rare. To our knowledge, less than eight cases of neurological deficit related to SAPHO syndrome have been reported in the literature. We also emphasize the effect of biological treatment in SAPHO syndrome.

Synovitis, acne, pustulosis, hyperostosis, and osteitis (SAPHO) syndrome is a rare group of sterile, inflammatory osteoarticular disorders classically associated with skin manifestations.(1,2) The etiology is unknown, probably involves genetic, infectious, and immunological factors. The characteristic feature of the disease is found in the bone lesions, which typically involve the anterior chest wall and axial skeleton. Spondylodiscitis in SAPHO syndrome is sometimes difficult to distinguish from infectious spondylodiscitis. Nonsteroidal antiinflammatory drugs are usually the efficient treatment. Cases of destructive spondylitis leading to spinal cord compression are rarely reported in the literature.

A 50-year-old male, with 10 years history of palmoplantar pustulosis, presented with a six-month history of inflammatory back pain. He had no significant family history. Physical examination showed restricted back movement (Schöber test was at 1.5 cm) with tenderness over thoracolumbar spinal processes. His body temperature was 37.2° Celsius. Dermatological examination was unremarkable. 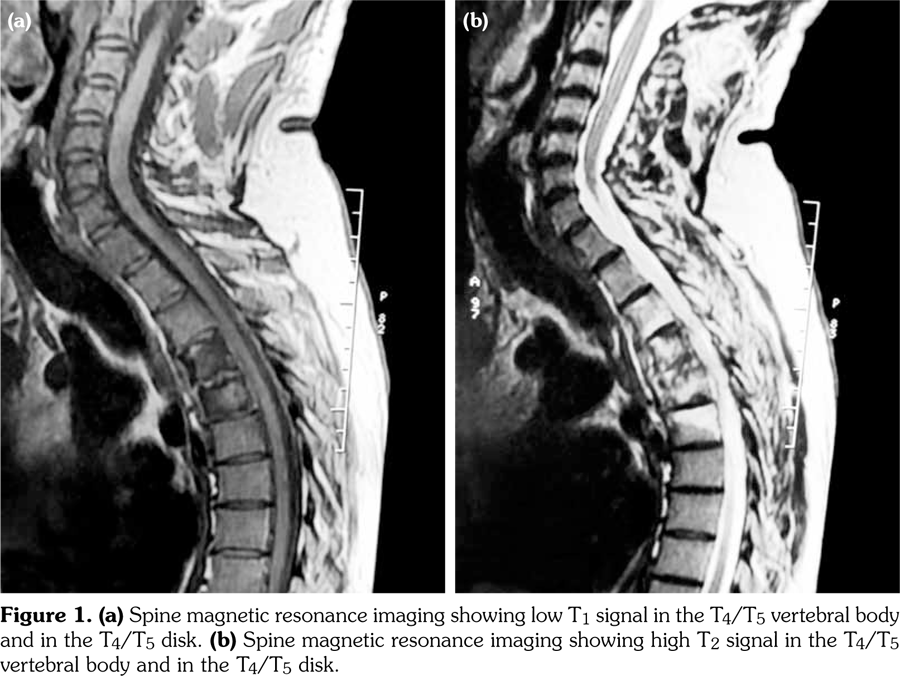 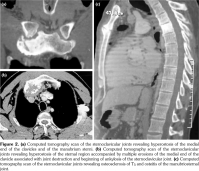 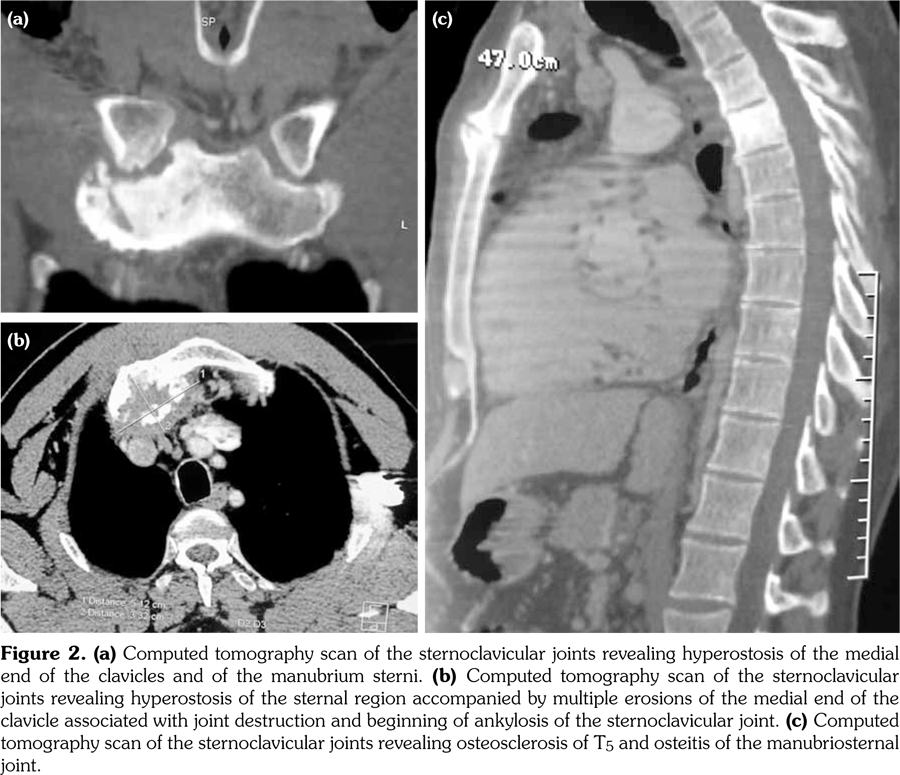 Thus, the diagnosis of SAPHO syndrome was established. Despite the use of nonsteroidal antiinflammatory drug, the disease remained active as attested by Bath Ankylosing Spondylitis Disease Activity Index at 6.7 at three-month follow-up. Then, the patient was lost to follow-up. One year later, he presented with hypesthesia and muscle weakness of his lower limb associated with kyphotic deformity and sphincter symptoms. He was unable to walk. Magnetic resonance imaging showed a vertebral collapse associated with spinal cord compression at T5 (Figure 3). Surgical treatment based on decompression and reconstruction with screw fixation was performed (Figure 4). The histopathology of the specimen obtained surgically showed nonspecific osteomyelitis with an infiltration of inflammatory cells and abnormal fibrous hypertrophy among the trabecular bone. One year later, etanercept was administered at a dose of 50mg weekly, leading to complete resolution of articular manifestations. Clinical remission was obtained under etanercept (Bath Ankylosing Spondylitis Disease Activity Index at 2.1). After two years of follow-up, patient’s paralysis improved by surgery, and he was progressively able to walk. 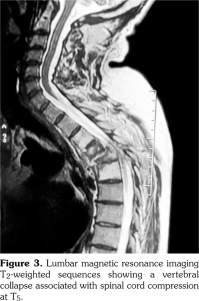 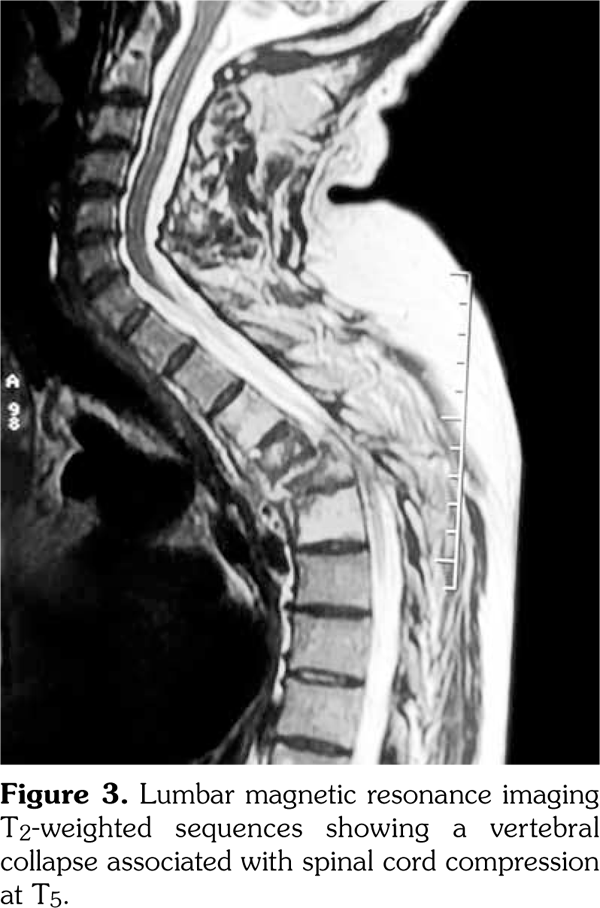 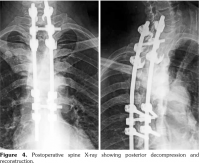 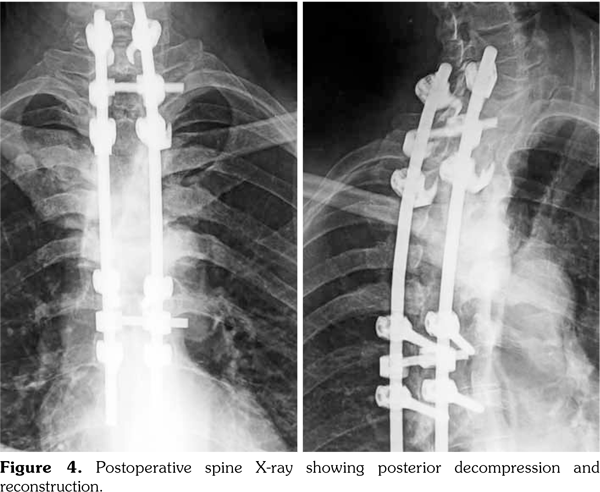 Synovitis, acne, pustulosis, hyperostosis, and osteitis syndrome is a rare group of sterile, inflammatory osteoarticular disorders classically associated with skin manifestations. The skin lesions are typically palmar and plantar pustulosis and acne.(1) Bone and joint lesions including aseptic osteitis, hyperostosis, and synovitis may either precede, occur simultaneously or after the start of the skin lesions. In our patient, dermatological manifestations preceded the occurrence of bone and articular lesions.

Radiological signs of SAPHO may sometimes be difficult to differentiate from infectious spondylodiscitis and even tumors, leading to a diagnostic delay. Indeed, the intervertebral disc may be narrowed, and, in 10% of cases, magnetic resonance imaging shows high signal intensity on T2-weighted images and gadolinium enhancement, simulating infectious spondylodiscitis.(3-7)

Despite the similarities of the radiological findings in inflammatory and infectious spondylodiscitis, some differences should be highlighted. As in our patient, no abscesses are observed in SAPHO syndrome. Furthermore, multiple foci of spondylodiscitis are uncommon in infection.(5) Biopsy of the disk space in patients with SAPHO syndrome reveals chronic sterile nonspecific inflammation.(6,7)

The spinal lesions in SAPHO syndrome usually have a good prognosis and rarely cause neurological deterioration.(5) In fact, they generally have an insidious onset and repeated recurrence and remission. In SAPHO syndrome, destructive lesions progress associated with marginal sclerosis explaining why destructive spondylodiscitis progresses slowly. However, if the speed of destruction by inflammation is faster than that of sclerotic reaction, the spinal structure would break.(8) We described herein a case of SAPHO syndrome complicated by severe destruction and kyphotic deformity leading to paralysis. To our knowledge, there are only seven cases of SAPHO syndrome with neurological deficit summarized in Table 1.(9-14) Surgery was performed leading to improved neurological signs. Treatment of SAPHO syndrome is not yet well codified. It is often based on isolated cases and reports of small series of patients. It was demonstrated that the use of tumor necrosis factor inhibitors leads to favorable clinical outcomes in patients with SAPHO syndrome.(15,16) Similarly, clinical remission was obtained under etanercept in our patient.