Objectives: This study aims to assess the prevalence of rheumatoid factor (RF) of immunoglobulin M nature in the Cameroonian population and the influence of demographic factors on its production.
Patients and methods: A total of 369 subjects (125 males and 244 females; mean age 42.36±15.73 years; range 15-88 years) were tested from five regions of Cameroon (Center, East, Far North, Littoral and West) between July 2012 and December 2012. Whole blood was collected from each participant and the serum was used for immunoglobulin M RF assay using the RF-IMMESCO test (agglutination technique).
Results: The prevalence of RF in the whole population was 5.4%, with a female to male ratio of 2.4. RF was present in all age groups, but especially in participants of 30 to 60 years of age. The Center region had the highest prevalence (7.5%), while the West region had the lowest prevalence (2.2%). However, there was no significant difference between studied regions (p>0.05). Of the 369 participants tested, 257 (69.6%) complained of having suffered joint pain at one time or another while 112 did not complain of joint pain. The prevalence of RF was 6.22% in the former group and 3.57% in the latter. Among those 50 to 70 years of age, nearly 90% had at least one painful joint.
Conclusion: The presence of RF in the study population may lead to joint diseases, which are more common disabling diseases among the inhabitants of Cameroon. Further studies are needed to bring more insight on the prevalence of RF in Cameroon.

Rheumatoid factor (RF) is an antibody against human or animal immunoglobulin (Ig) and most often belonging to the IgM class. RF may also be of IgA, IgG or IgE isotype.(1,2) Whatever the Ig class of these factors, their common denominator is that they are always directed against human or anim al IgG. Some RF can autoagglutinate to form polymers comprising many identical molecules. The valence of an IgM molecule is 10; an RF binds to 10 IgG molecules and thus forms a macromolecular complex.(3) These immune complexes are responsible for inflammation, which is triggered by their accumulation on tissues. Complement fixation on immune complexes

plays a role in the genesis of tissue damage.(4) Phagocytosis by polymorphonuclear immune complexes releases various lysosomal enzymes, free radicals, and derivatives of arachidonic acid that induce inflammation in the articulation.(4) This can lead to rheumatoid arthritis (RA) which may be diagnosed by assessing changes in biochemical factors, such as RF. However, the presence of significant levels of RF at the beginning of RA is an indicator of poor prognosis.(5)

The specificity of these factors is very variable and its heterogenicity is large. RF can be found in many other pathological conditions, certain connective tissues, Sjögren's syndrome where the levels of RF are particularly high, infectious diseases (transient presence) and normal subjects.(6) RF may be present in the serum of some patients without any clinical manifestation, even for several years before the onset of rheumatoid polyarthritis (RP). However, RF may be detected in patients who never develop RP.(7) At the active phase, RF is present in 70-85% of positive RP patients, which corresponds to “seropositive” RP as opposed to “seronegative” RP in which there is no detectable RF. Severe RP with extra-articular manifestations are almost always strongly “seropositive”.(7)

In Cameroon, people frequently complain of joint diseases which may be chronic and disabling disorders that affect the quality of life.(8,9) RF is so far the main biomarker sought locally for the diagnosis of rheumatic diseases. With this in mind, in this study, we aimed to assess the prevalence of RF of IgM nature in the Cameroonian population and the influence of demographic factors on its production, as the significance of autoantibodies such as RF in the diagnosis and monitoring of some autoimmune diseases is well-known.

This prospective, cross-sectional and descriptive- based study was conducted between July 2012 and December 2012 in five regions of Cameroon (the Center, East, Far North, Littoral and West regions). The studied regions were chosen by convenience sampling technique. These regions are characterized by diverse climatic conditions and cultural habits. A total of 369 participants (125 males, 244 females; mean age 42.36±15.73 years; range 15 to 88 years) who were accompanying patients were recruited consecutively in the major health facilities of the five regions. Each participant was asked to sign an informed consent form, and then complete a questionnaire on demographic data. In the same questionnaire, the participants were also asked whether they were suffering or had ever suffered from joint pain for more than six weeks. About 5 mL of blood was thereafter collected by venipuncture, and used for the preparation of serum. The serum was aliquoted and stored at -20 °C for analyses. The study protocol was validated by the Cameroon National Ethics Committee for Human Health Research (authorization N°016/CNE/SE/2012).

Serological analyses were performed at the Center for the Study and Control of Communicable Diseases, Faculty of Medicine and Biomedical Sciences in Yaoundé.

We tested the serum of each participant for IgM-RF using the IMMESCO-RF kit (INMESCO GmbH - Neustadt//Wied, Germany) accordingt o the principle of Waaler Rose technique. Briefly, 50 μl of serum and 50 μl of reagent IMMESCO- RF were placed in a circle of the test plate provided by the manufacturer. Reagents and serum samples were stirred with a spatula and mixed by rotating the plate for two minutes, using a mechanical homogenizer. The development of visible agglutination reflected the presence of RF ≥8 IU/mL in the analyzed serum, while absence of agglutination was considered to be a negative result. The assay was validated using positive and negative controls provided by the manufacturer of the kit.

The greatest number of participants was recruited in the Center region (n=161, 47%), while the smallest number of subjects was from the Littoral region (n=29, 8%) (Figure 1). From the 369 participants recruited, 257 (69.6%) reported to be suffering or had suffered from joint pain lasting for more than six months. These included 181 females and 76 males, indicating a female/male ratio of 2.4. From the age of 15 to 88 years, the percentage of participants complaining of joint pain was increasing (Figure 2); however, it was around 30 years of age that these pains started to become very frequent and the number of people suffering from pain gradually increased. Between 50 and 70 years of age, nearly 90% of the study population had at least one painful joint (Figure 2). The distribution of the most painful joints among the studied population is shown in Figure 3, indicating that the cervical vertebrae and knees were the most affected joints. 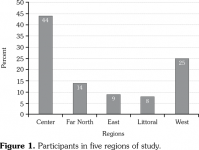 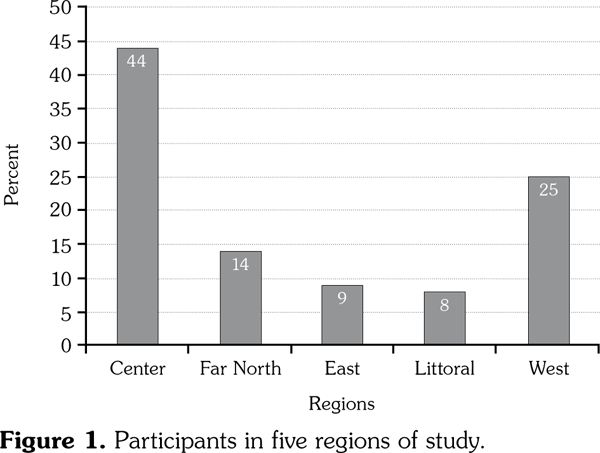 Figure 2. Evolution of joints pain amongst participants according to age.
× 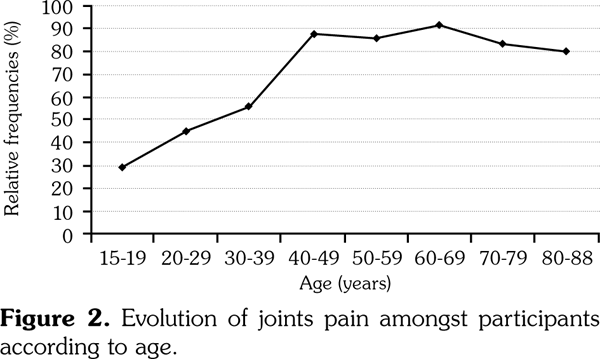 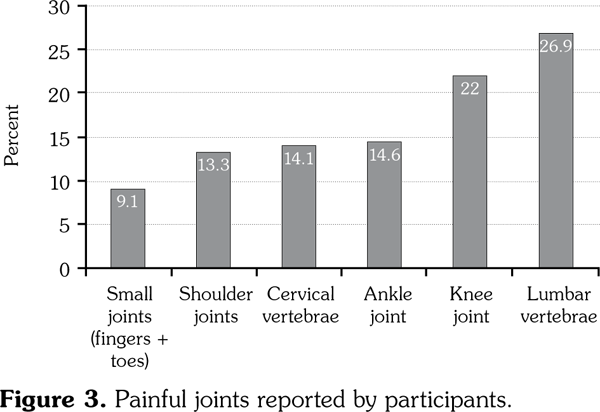 Figure 4. Prevalence of rheumatoid factor among male and female participants.
× 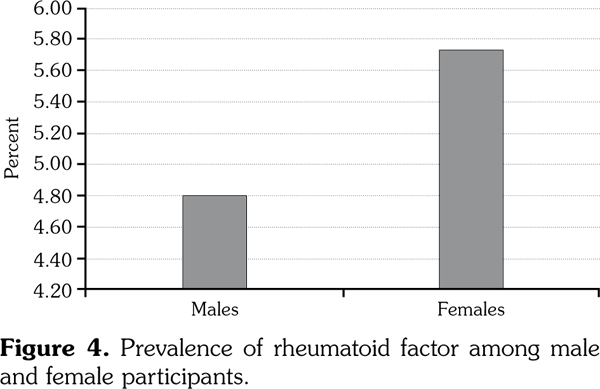 Table 1. Prevalence of rheumatoid factor according to age groups
×

The prevalence of RF in the studied population was 5.4%. RF stimulates the immune system in a continuous manner, resulting in a high frequency of autoimmune diseases including RP diseases.(10) A similar study in a malaria-endemic area in Cóte d’Ivoire(11) carried out in 1999 showed an RF prevalence of 7% among people aged between 03 and 70 years. The current study did not include subjects younger than 15 years of age, and this may be the reason why the prevalence reported here is slightly different from the one reported in the Cóte d’Ivoire study. A different study in the African population revealed that 16% of the healthy population was positive for RF;(11) the presence of elevated background levels of IgM-RF in African controls (16% of IgM-RF positive healthy controls when using the recommended cut-off values) is probably caused by non-specific activation of the immune system by different infectious and parasitic diseases,(11) which constitute the main burden in Africa. Indeed, people younger than 15 years of age who were more exposed to parasitic and infectious diseases were also included in the study. Differences between the two studies may also be attributed to the use of two distinct analysis methods (ELISA method for titration of IgM-RF in the previous study, and an agglutination method for detection of RF in the current study) which have different sensitivities.

Our data showed that females produced more RF than males (16 females as compared to 4 males) with a 2.4-fold increased risk in females close to 2.61 obtained in Cóte d’Ivoire(12) although the difference was not statistically significant (p>0.05). This can easily be explained by the influence of female sex hormones on autoimmune processes, as reported earlier.(13) Female hormones have a certain role in the onset and/or worsening of the disease, as evidenced by the risk of flare induced by estrogen-progestogen pills, pregnancy, and the postpartum period.(13)

Participants affected by joint pains had a high prevalence of RF as compared to those not affected; but the difference was not statistically significant between these two groups (p>0.05). On the other hand, previous investigations showed that the prevalence of RF can be up to 70% amongst patients with RA, whereas the prevalence reported in Cameroon during this study was 6.22% amongst participants suffering from joint pain only. The current study did not include only RA patients. There are indeed degenerative joints pain diseases such as osteoarthritis, metabolic arthropathies such as gout, and autoimmune arthropathies such as lupus erythematosus, in which RF may not be involved.(14) Some neurologic disorders may also be associated with joint pain.

Rheumatoid factor was present in people aged 15-69 years and absent beyond 69 years. Some studies have shown that several autoimmune diseases, including RP can occur at any age but mostly between 40 and 60 years. Beyond this age, the rate decreases gradually.(5) The studies of RF conducted in subjects >65 years of age revealed that clinical significance of autoantibodies in elderly patients is related more to global health status than to the effects of aging.(15,16) Some studies claim that the incidence of RF increases with age and that about 20% of people over 65 have an elevated RF.(17) Investigations in the Japanese population also revealed a significant positive correlation between age and RF values.(18) However, other studies showed that RF levels seemed to be similar from 20 to 100 years of age.(19) These studies show variability in the correlation between age and RF. It is important to emphasize the fact that aging is accompanied by decreased immunity, alteration of T lymphocyte cooperation with B-lymphocytes, decreased B-cell renewal and alteration of costimulatory pathways.(20) This set of phenomena associated with age may explain the absence of RF beyond 69 years of age as observed in some studies.(20) The method we used (agglutination technique) is not as sensitive as the ELISA method and the small size of our sample may also explain why we did not obtain positive sample above the age of 65 years.

We did not notice any significant difference of RF prevalence between participants from the Center region and those from the West region (7.5% and 2.2% of RF-positive, respectively; p>0.05), and this may mean that RF production is not influenced by climate. The lack of a significant difference in the prevalence of RF between the different regions of Cameroon is in agreement with the results obtained by Klemmer et al.(13) in 2005, who noticed that environmental factors do not seem to have a major influence on the activity of RF.

The prevalence of IgM-RF was 5.4% in our study population, and females produced 2.4 times more RF than males. Production of RF was not influenced by age or environmental factors. RF prevalence in participants affected by joint pain that lasted for six weeks and above was higher than those who had never felt joint pain. This preliminary study provides information on RF prevalence in Cameroon’s population, in relation with joint pains as well as the relationship between aging and RF. Further studies with larger sample size and also focusing on the impact of bacterial, parasitic and viral etiologies, etc. are needed to bring more insight on the prevalence of RF in Cameroon.