A Rare Adult Case of Sacroiliitis Due to Poststreptococcal Reactive Arthritis

Poststreptococcal reactive arthritis (PSReA) is a type of sterile arthritis which occurs after a beta-hemolytic streptococcal throat or skin infection. (1) It was first termed as scarlatinal arthritis in 1959.(2) It is distinguished from acute rheumatic fever (ARF) with the absence of Jones criteria. Additionally, in PSReA the latency period is about 1-2 weeks, shorter than ARF and cardiac/kidney involvement is also rare. PSReA is a kind of nonmigratory arthritis that usually affects the knee and ankle joints. Although rare, small joints and the axial skeleton may also be involved.(3) The age distribution is bimodal i.e. 8-14 and 21-37 years unlike ARF which is usually diagnosed in earlymiddle aged patients.(4)

In this report, we present a patient with unilateral sacroiliac joint involvement and adductor enthesopathy following an upper respiratory tract infection who was eventually diagnosed with PSReA.

A 43-year-old male patient was admitted to our hospital with severe right hip pain for the last three weeks. His complaints had first started with sore throat one month ago when he had been diagnosed as acute tonsillitis and treated with antibiotic for one week. He described that three days after the initiation of the sore throat, right hip pain had begun and that he had also suffered skin lesions at palmar sides of his both hands and plantar sides of his feet. Thereafter, he had been hospitalized to an infectious diseases clinic whereby hip magnetic resonance imaging had revealed inflammatory signal changes with edema at the right hip adductor muscle insertion. He had been diagnosed with septic arthritis and parenteral ceftriaxone and azithromycin had been given. As the hip pain persisted, the patient was referred to our clinic. 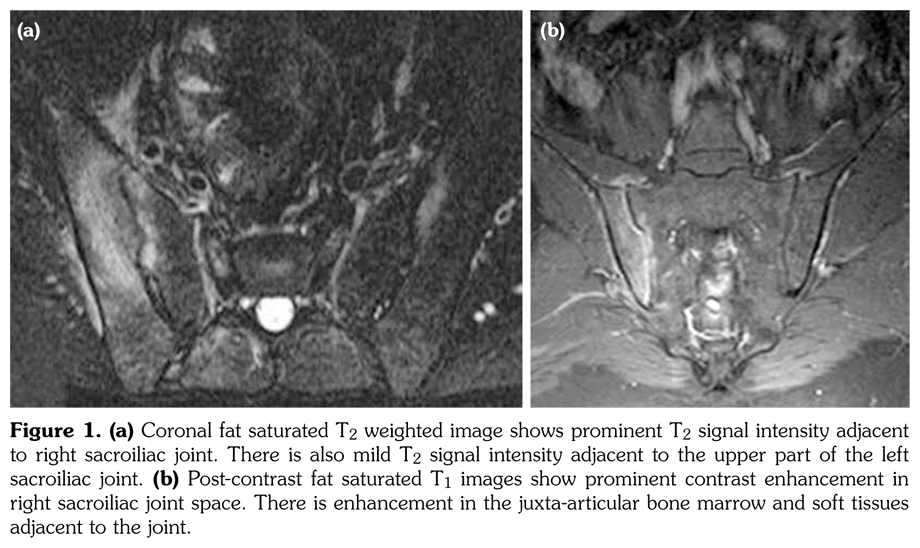 Poststreptococcal arthritic syndrome which did not fulfill the diagnostic criteria for ARF was first defined as scarlatinal arthritis by Crea and Mortimer in 1959.(2) Goldsmith and Long(5) were the first to introduce the term PSReA for the syndrome. Initially, it was considered to be a sort of ARF whereas later on the differences between the two diseases have been established.(6) Currently, PSReA is accepted to be a separate disorder from ARF by the following features: a shorter latency period between the infection and the onset of arthritis, lack of response to salicylates, lower acute phase reactants; absence of carditis, and more severe arthritis.(7,8)

Poststreptococcal reactive arthritis is a type of non-migratory arthritis that usually affects the knee and ankle joints, and axial involvement is rare.(3) To our best notice, sacroiliitis and adductor muscle involvement has been reported in a few cases in PSReA.(4) We established the diagnosis by demonstrating the unilateral sacroiliitis and the adductor enthesopathy with magnetic resonance imaging. Likewise, we would like to draw attention of physicians towards the possibility of sacroiliitis in patients with PSReA. Substantial medical history, prompt physical examination and imaging would definitely be crucial in this regard.