To date, there have been several studies investigating the cardiac functions in BD.(9-14) In those studies, conventional echocardiography has been used for the assessment of cardiac function. However, several controversial results were obtained particularly regarding diastolic functions.(9-14) Hence, novel methods for more objective estimation of the cardiac functions such as tissue Doppler echocardiography (TDE) or Doppler-derived myocardial performance index (MPI) might be helpful in BD. Such as, MPI, which combines both systolic and diastolic function,(15) ventricular dyssynchrony, which indicates heterogeneity of contraction time between different myocardial segments, may give a better reflection of the global left ventricular (LV) function than conventional echocardiography, though, to our knowledge, these have not been investigated so far.(16)

In this study, we aimed to evaluate LV and right ventricular (RV) functions at rest by pulsedwave Doppler and TDE methods in patients with BD without overt cardiovascular disease, and compare to age and sex matched subjects.

In this study, 54 consecutive patients with early BD (12 males, 42 females; mean age 35±8 years; range 15 to 51 years), all fulfilling the criteria of the International Study Group for BD(17) between June 2006 and September 2008, and 36 age-matched healthy controls (12 males, 24 females; mean age 33±5 years; range 18 to 47 years) were enrolled. All patients had less than 10 years of diagnosis. Patients with overt cardiovascular disease including coronary artery disease, renal failure, moderate or severe valvular heart disease, atrial fibrillation, and any other chronic or inflammatory disease were excluded. The drugs which were still being taken by the patients during the study were: prednisolone (n=25), colchicine (n=14), salicylate (n=10), cyclosporine (n=4), and azathiopirine (n=2). None of the patients had current or previous cardiovascular symptoms. All patients had stable normal sinus rhythm.

Medical histories, physical examinations, laboratory findings, and standard 12 lead electrocardiograms of the two groups were obtained. None of the patients had any of the active disease manifestations during echocardiographic evaluation (no symptoms for at least 1 month). All patients gave informed consent and the study protocol was approved by the local ethics committee.

The echocardiographic examinations were obtained by using 2.5-3.5 MHz transducer (GE-Vingmed Vivid 7 system). LV systolic and diastolic diameters, wall thickness, ejection fraction, aortic root, and left atrium were measured according to recommendations.(18) Parasternal long axis view was used as the gold standard for mitral valve leaflets prolapse (MVP). MVP was present when any portion of the anterior, posterior or both mitral valve leaflets prolapse ≥3 mm beyond an imaginary line drawn from the origin of the posterior aortic root to the atrioventricular groove.(18) Interatrialseptum was evaluated for atrial septal aneurysm (ASA), and patent foramen ovale (PFO) using contrast echocardiography. ASA was accepted as an abnormal bulging (>1.5 cm in length and excursion) from the midline of the interatrial septum. Valvular regurgitation was detected and semiquantitatively evaluated by means of color flow Doppler.(18)

Mitral E velocity (ME), mitral A velocity (MA), mitral E wave deceleration time (MEDT), and LV isovolumic relaxation time (IVRT), defined as time period between the termination of aortic systolic wave and beginning of ME, were measured by locating the sampling volume cursor of pulsed Doppler in the apical four chamber position at 5 mm above the mitral leaflets tips.(19)

To assess RV diastolic functions, tricuspid E velocity (TE), tricuspid A velocity (TA), and tricuspid E wave deceleration time were measured by locating the sampling volume cursor along the level of tricuspid annulus.(20) Then, adjusting the equipment of echocardiography to tissue Doppler measurements, the sampling volume cursor was located at the cross-sectional point of mitral annulus and lateral wall. Using the traces obtained from this location, ME´ and MA´ diastolic tissue Doppler velocities were measured.(21)

Right ventricular diastolic functions were measured with TDE by locating the sampling volume cursor at the cross-section point of lateral annulus and RV free wall. TE´ and TA´ diastolic tissue Doppler velocities were measured by the traces obtained from this point.(21)

The intraobserver variability of echocardiographic measurements ranged between 4-7%, and all examinations were performed by an experienced echocardiographer, who had no knowledge of the patient’s clinical information.

Statistical analysis
Parametric data were expressed as mean ± standard deviation and categorical data as percentages. Continuous parameters between independent groups were compared with Student’s t-test. Comparison of categorical data between two groups was performed with the Chi-square test as appropriate. In all correlation analyses, the Pearson correlation test was used. A p value less than 0.05 was considered statistically significant. Statistical analyses were performed on a computer using the SPSS program, version 10.0 (SPSS Inc., Chicago, IL, USA) for Windows.

All patients and control subjects were in functional class I of the New York Heart Association classification. All patients had a history of recurrent oral ulcerations. The general characteristics of the patients are shown in Table 1.

Oral aphthous ulcerations were seen all patients. Ocular involvement manifesting itself notably in the form of mild recurrent anterior and posterior uveitis (88%) and serious uveitis or retinal vasculitis were noted in 12%. Papulopustular lesions were seen in 30 patients (56%), and erythema nodosum in 26 patients (48%). Superficial thrombophlebitis mostly localized to the lower extremities was observed in six patients (11%).

Table 2. Clinical and laboratory characteristics of the study population
× 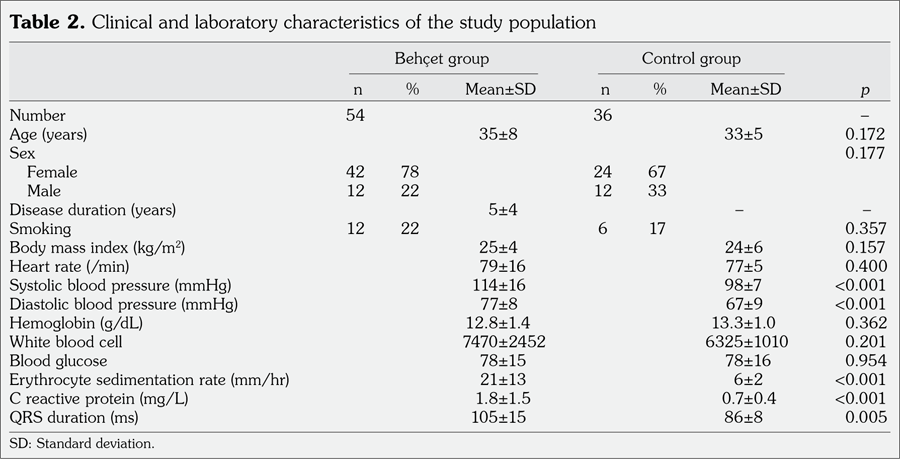 Atrial septal aneurysm was observed in 44% of patients with BD, and in 4% of controls (p=0.007). PFO was observed in four patients (11%) and not observed in any of the controls (p=0.1). MVP was not detected in the patient or control group. Mild mitral regurgitation and mild tricuspid regurgitation were significantly higher in patients than controls (61% patients and 17% controls, p=0.001; and 56% patients %21 controls, p=0.01, respectively). Mild aortic regurgitation was seen in six patients (17%) and was not seen in any of the controls (p>0.05). Other valve functions were similar in both groups. We also detected intracardiac thrombus formation in the right atrium in two patients. On the sixth month of the anticoagulant therapy, complete lysis of intracardiac thrombosis was observed.

The dimensions and volumes of LV were significantly higher in control group, whereas wall thickness, left atrial diameters and conventional indices of LV contraction were similar in both two groups (Table 3). The diameters of RV and pulmonary artery were higher in patients.

Table 3. Conventional and systolic parameters of the left ventricle
× 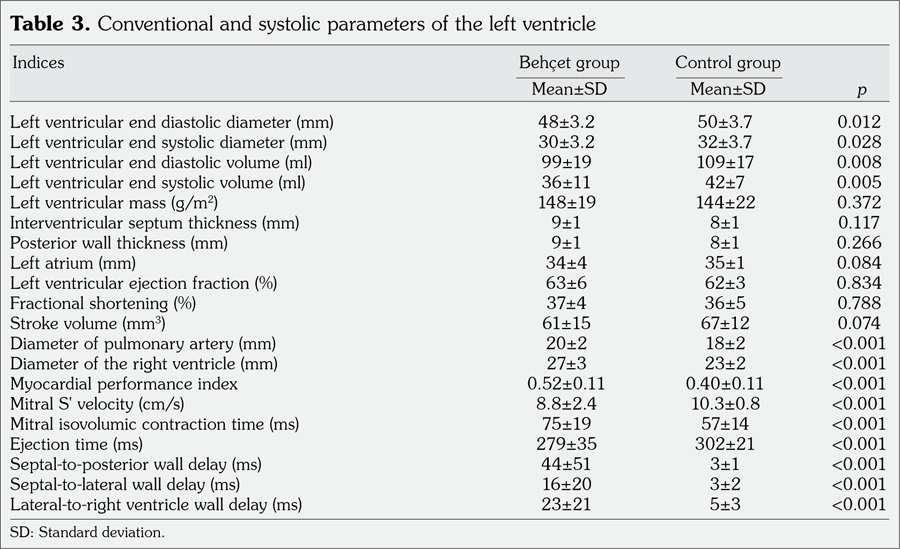 Mitral E velocity was similar between the groups. Although diastolic parameters were within normal limits; MA, MEDT, IVRT and ME/ME´ were significantly higher in patient group (Table 4). Consistently, ME´ and ME/MA were significantly lower in patients. Furthermore, although ME/MA was <1 in 41% of patients, it was not detected in any controls.

The diameter of pulmonary artery and RV were greater in patients than in controls (Table 4). Similar to LV Doppler findings; TA, tricuspid E wave deceleration time and TE/TE´ were significantly higher in Behçet group. Consistently, TE´ and TE/TA were significantly lower in patients. Also, TE/TA was <1 in 50% of patients whereas it was not detected in any controls.

The incidence and natural history of cardiac involvement in BD have not been clearly documented yet. Cardiovascular manifestations have been reported in 7-46% of cases with BD and mortality occurs in up to 20% of those patients with marked vascular involvement.(23)

Both systolic and diastolic blood pressure measurements were significantly higher in Behçet group. Our hypothesis is that the increased blood pressure in BD might be caused by changes in normal responsiveness of the vascular bed to pressure stimuli because of vasculitis or autonomic nervous dysfunction.

The prevalence of MVP was reported to be 6-50% in previous studies.(24,25) In our study, MVP was not detected in the patient or control group. These discrepancies may be related to strictly applied echocardiographic diagnostic criteria for MVP in our study. In autopsy studies, PFO was detected in approximately 25-35% of cases.(26) In our study, there was no difference between the BD patients and control subjects with respect to the incidence of PFO (11% vs. 4%, p=0.12). Also, our findings were not different from previous reports.(27) However, we detected an increased incidence of ASA in patients with BD (44% vs. 4%, p=0.007). The etiology of ASA in this disorder can be attributed to systemic vasculitis and tissue derangement. Although mild mitral and tricuspid regurgitation were more frequent in patients with BD, there was no structural valve anomaly in any patient and the incidences of mild AR or other valvular abnormalities were similar between the groups.

The previous studies using conventional echocardiography reported that LV diastolic dysfunction was more frequent in patients with BD.(9-12) Komsuoglu et al.(10) reported that MEDT and IVRT were significantly prolonged and the ME/MA ratio was lower in patients with BD compared with the control group. Gemici et al.(12) showed that ME, MA and ME/MA ratio were similar, but IVRT and MEDT were significantly prolonged in patients. Nevertheless, it is well known that conventional techniques may be dependent on loading conditions and are influenced strongly by aortic or left atrial pressures.(28,29) With the assistance of TDE, diastolic function can be evaluated independently from loading conditions.(30) So, we used both conventional echocardiography and TDE in our study.

By using conventional Doppler techniques, we detected that all parameters of LV diastolic function except for ME were impaired in Behçet group, but still in the normal range. In TDE, although ME´ was within normal reference limits, it was significantly lower in Behçet group compared to the control group. Consistently, ME/ME´ was greater in patient group compared to the control group. Although ME/ME´ is a marker of increased LV end-diastolic pressure, whether this finding shows LV diastolic dysfunction in this case is not clear. At the end of exercise, diastolic parameters changed similarly in two groups, but the statistical significance of ME/MA ratio was lost.

All Doppler parameters of RV function, except for TE, were impaired in Behçet group similar to LV. Tricuspid annular motion can be assessed easily with TDE.(31,32) However, like other parameters of RV function, the tricuspid annular velocities are load dependent. This method has been accepted as a convenient means of quantitatively evaluating RV systolic function and has been used as a diagnostic tool by a number of groups.(33,34) The sensitivity of tricuspid annular motion for the detection of early RV dysfunction may be superior to more conventional imaging techniques.(33) Therefore, lower TE/TA and TE´, and higher TE/TE in BD may be clinically relevant findings.

Most studies that evaluate LV systolic function in BD have reported no difference between patients and control groups,(10-12) but Calguneri et al.(9) reported that mean ejection fraction, which was evaluated by radionuclide ventriculography, despite being in the normal range, was significantly lower in patients when compared with controls. In our study, the dimensions of LV were higher in control group, but conventional indices of LV systolic function were similar between groups like previous studies.(10-12)

Myocardial performance index is an easy, reproducible, quantitative method to evaluate both LV systolic and diastolic function, independent from heart rate and blood pressure. We detected that MPI was significantly higher in Behçet group, and greater MPI was consistent with impaired LV function(15) as in a previous study of Tavil et al.(35) Consistently, MS´ was significantly lower in Behçet group in our study.

Asynchronous LV electromechanical activation was shown to be associated with deteriorated LV remodeling and dilation.(36) Also, a small study has shown a positive relationship between reduced systolic dyssynchrony and increased LVEF.(37) In our study, despite being in normal range, LV septal to posterior wall delay time, LV septal to lateral wall delay time, LV lateral to RV wall delay time, and preejection time difference were all higher in Behçet group compared to the control group.

Thus, we conclude that LV systolic function may be affected in BD, and despite conventional LV systolic function indices, increased MPI, decreased MS´ and impaired ventricular synchrony might aid in early identification. As a single-center study, the major limitation of this study is its small sample size and female dominance (major clinical involvement is seen more in male patients with BD). Thus further studies are required for more definitive validation.