Aortic Valve Involvement in a Patient With Granulomatosis With Polyangiitis

Granulomatosis with polyangiitis (GPA) is a multi-systemic necrotizing vasculitis which may involve any organ system, although it affects the upper and lower respiratory tract and the kidneys most commonly.(1) Cardiac involvement has been reported in GPA in the form of conduction abnormalities, pericarditis, myocarditis, valvulitis, coronary vasculitis, and myocardial infarction.(2,3) Valvular involvement in GPA has been described in the form of valvulitis leading predominantly to regurgitant lesions and sometimes to stenotic lesions. A mass lesion of the mitral valve has also been described in GPA.(4) We, herein, report a mass lesion of the aortic valve in a patient with GPA.

A 47-year-old man presented to emergency with a history of progressively increasing pedal edema for the last two weeks along with progressively increasing dyspnea for the past one week, and hemoptysis for the past two days. Physical examination revealed hemodynamic stability with tachypnea (respiratory rate 24 bpm) with pedal edema, facial puffiness and purpuric rash over the shins. His chest examination revealed bilateral diffuse crepitations. Cardiovascular examination demonstrated an early diastolic murmur along the left sternal border.

The patient had normocytic normochromic anemia with a hemoglobin level of 8 g/dL, white blood cell count of 14000/mm3 with 80% neutrophils, serum urea value of 80 mg/dL, and serum creatinine value of 2.5 mg/dL. Serum electrolytes and liver function test results were normal. Urinalysis examination revealed protein 3+, and 15-20 red blood cells per high power field. Twenty-four-hour urine protein was 1.2 grams. Abdominal ultrasound revealed enlarged kidneys with increased echotexture and altered corticomedullary differentiation. Thoracic X-ray demonstrated bilateral pulmonary infiltrates, while computed tomography revealed bilateral patchy opacities with thickening of the right horizontal fissure and bilateral alveolar infiltrates. Echocardiography also revealed a mass over the anterior aortic valve with mild aortic stenosis and moderate aortic regurgitation (Figure 1). Anti-neutrophilic cytoplasmic antibody (ANCA) serology showed a markedly increased level of anti-proteinase 3 (anti-PR3) (31 IU/ml, cut off ≤3.5 IU/ml), and anti-myeloperoxidase (anti-MPO) level of 2.1 IU/ml (cut off ≤9 IU/ml). Blood cultures were sterile. Antinuclear antibodies, human immunodeficiency virus, hepatits B surface antigen, hepatitis C virus serologies and sputum for acid-fast bacilli were negative. A preliminary diagnosis of GPA with acute nephritis and probable alveolar hemorrhage were made based on the possibility of concomitant infective endocarditis/involvement due to GPA. The patient was firstly treated with broad-spectrum antibiotics. However, after three days of no response to the antibiotic therapy, the patient was started on pulse methylprednisolone doses of one gram per day for five days along with pulse cyclophosphamide of 750 mg, and the antibiotics were also continued. The patient improved over a period of one week, and his hemoptysis stopped. His repeat urea was 60 mg/dL, and serum creatinine level was 1.5 mg/dL. The patient was discharged with prednisolone 60 mg per day and was asked to apply to the outpatient department for the next pulse of cyclophosphamide. However, the patient did not report back and was lost to follow-up. 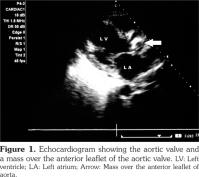 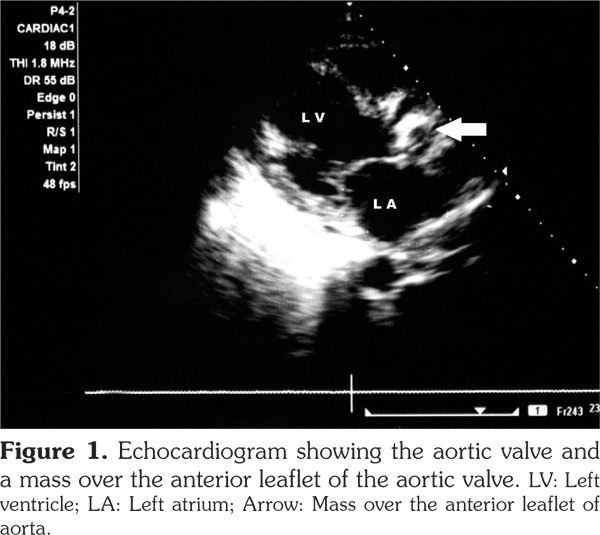 Granulomatosis with polyangiitis is an uncommon disease and systemic necrotizing vasculitis.(1) Cardiac involvement in GPA can be in the form of silent ischemia in the majority of patients; while in other patients, it may present as conduction abnormalities, pericarditis, granulomatous myocarditis, valvulitis, endocarditis, coronary arteritis, aneurysms, and myocardial infarction.(2-4)

Our patient presented with predominantly renal and pulmonary involvement. Besides, in the course of investigation, he was found to have a valvular lesion in the form of aortic valve mass. We considered the possibility of the mass being a vasculitic lesion in view of the patient’s high disease activity in other organs including the lungs, kidneys and skin, and high titers of anti-PR3 antibodies. Additionally, no organism grew in blood cultures, and the patient responded to high doses of parenteral steroids.

Patients with mitral valve mass have been reported in the literature.(5) There are reports of valvular involvement leading to severe aortic regurgitation requiring valve replacement, while the histopathology of the native valve showed features typical of GPA, and another case demonstrated myxoid degeneration which was most likely due to vasculitis of the blood vessels supplying the aortic valves.(6,7) A study of nine patients with GPA who underwent complete M-mode, two-dimensional, Doppler and color-Doppler transthoracic echocardiogram revealed valvular involvement in eight patients. Three patients had aortic insufficiency severe enough to require valvular replacement.(8) Rarely, multiple valve involvement in the form of mitral and aortic valve may occur and the lesion may be either regurgitant or stenotic.(9)

Cardiac involvement in GPA is seen less commonly, although some reports suggest that cardiac involvement is being recognized more often now.(1,10) This may be thanks to a better understanding of the pathophysiology of GPA and increased awareness among physicians that silent cardiac involvement may occur in these patients. The ischemia in these patients may be due to the involvement of the small vessels secondary to the vasculitic process rather than the atherosclerosis as it responds to immunosuppressive therapy with reversal of ischemic changes.(11) Dual ANCA positivity (anti-PR3 and anti-MPO ANCA) can occur in patients with systemic infections such as subacute bacterial endocarditis or hepatitis C virus infections. Such patients have multiple serological abnormalities like anticardiolipin antibodies, cryoglobulins, and hypocomplementemia.(12,13) However, pulmonary involvement is more common in patients with ANCA associated vasculitis compared to the patients with infection-induced ANCA positivity.(12,13)

Patients having a mass over the valve leaflet are very rare. The reported cases of valvular involvement where histopathology of the valves was available demonstrated either histopathology typical of GPA or myxoid degeneration that was most likely due to previously active vasculitis.(14,15) In addition, GPA may present with mass lesions around large arteries like aorta where the mass may be a granulomatous lesion arising from the retroperitoneum or the surrounding tissue.(16)

Thus, we report a very rare occurrence of an aortic valve mass in a patient of GPA which we presume to be a lesion secondary to GPA. The pointers in favor of the mass being secondary to GPA were (i) having no response to initial antibiotic therapy, (ii) sterile blood cultures, and (iii) pulmonary involvement in the form of pulmonary hemorrhage and hemoptysis. Also, the patient responded to the immunosupression rather than deteriorating which would have been the case if the patient had underlying subacute bacterial endocarditis and sepsis. However, our report is limited by the fact that the patient was lost to follow-up. Besides, the histopathology of the mass lesion was not available. We believe that all the patients with GPA need to undergo echocardiography for any cardiac involvement.