The Effects of Helicobacter Pylori Eradication on the Number of Tender Points, Sleep Quality, Depression, and Anxiety in Patients With Fibromyalgia

Fibromyalgia syndrome (FMS) is a chronic disorder characterized by widespread musculoskeletal pain and the presence of tender points(1). Sleep disturbance is one of the most common symptoms of FMS(2). Fibromyalgia is frequently found to comorbid with depression and anxiety(3).

The etiology of fibromyalgia is exactly unknown, and the role of microorganisms in the etiopathogenesis of FMS remains controversial. Although the possible association between various microorganisms and fibromyalgia have been investigated, there is rather limited literature regarding the role of Helicobacter pylori (H. pylori)(4). Helicobacter pylori is a gram-negative bacterium found in the stomach, however, in recent years there has been a growing interest in the subject of extragastric manifestations of H. pylori infection(5). Some mechanisms such as the release of inflammatory mediators, molecular mimicry, and systemic immune response have been suggested for the extragastric involvement. It is possible that H. pylori plays a role in FMS via these mechanisms. The aim of this study was to assess the effect of H. pylori eradication on the number of tender points, sleep quality, depression, and anxiety in patients with FMS. To the best of our knowledge, this is the first study to evaluate the impact of H. pylori eradication on fibromyalgia symptoms.

This study was carried out at the Yuzuncu Yıl University Hospital between May 2012 and August 2012. The inclusion criteria of patients in the study were: (i) age 21 years or older, (ii) diagnosis of FMS by the American College of Rheumatology criteria,(6) (iii) presence of dyspeptic complaints, (iv) detection of H. pylori positive gastritis by endoscopy, and (v) written consent of the patient to participate in the study.

Patients were excluded from the study if they received H. pylori eradication therapy within the past year or fibromyalgia treatment in the previous six months or H2 receptor antagonist, proton pump inhibitor or analgesic drugs within the past week prior to the study. Patients with hypersensitivity against drugs used in the study, pregnancy or lactation, rheumatic disease, liver or renal disorder, systemic diseases (e.g. diabetes mellitus, hyper- or hypothyroidism, asthma, etc.) were also excluded.

The study protocol was approved by the ethical review board of the institution. One hundred and three patients with FMS were consecutively recruited from the outpatient rheumatology clinic. Dyspeptic complaints from the upper gastrointestinal tract such as epigastric pain, burning or discomfort were revealed in 41 of these patients (approximately 40%). These 41 fibromyalgia patients with dyspeptic complaints were investigated by gastric endoscopy in the outpatient gastrointestinal endoscopy laboratory. Thirty-two of the 41 patients (28 females, 4 males, mean age 38±8.6 years) completed the study. Biopsy specimens for bacterial culture were obtained from the gastric antrum and assessed for the presence of H. pylori, a procedure, which is considered to be a gold standard(7).

All patients included in the study were evaluated by the number of tender points, the Pittsburgh Sleep Quality Index (PSQI),(8) the Beck Depression Inventory (BDI),9 and the Beck Anxiety Inventory (BAI)10 before treatment and three weeks after completion of treatment for eradication of H. pylori. Treatment consisted of a combination therapy including amoxicillin 1 g, clarithromycin 500 mg, lansoprazole 30 mg given twice daily for three weeks, to all patients.

Statistical analyses
The Statistical Package for Social Sciences for Windows version 11.5 (SPSS Inc., Chicago, IL, USA) software program was used to conduct all statistical analyses. Categorical variables were described in numbers, while continuous variables were expressed in mean ± standard deviation and median (minimum-maximum). The Shapiro-Wilk test was used to analyze normally distributed continuous variables. Differences between pre- and post-treatment results were assessed with the Wilcoxon-signed rank test. A p value of <0.05 was considered statistically significant.

Thirty-two of the 41 patients with fibromyalgia (78%) were found to be H. pylori positive. Compared to baseline, the number of tender points was found to be significantly reduced in all patients at three weeks after completion of treatment for H. pylori eradication (p<0.001) (Table 1 and Figure 1). However, considering the PSQI, BDI, and BAI, there were no significant differences between pre- and post-treatment results (all p>0.05) (Table 1).

Table 1. Comparison of measures between pre- and post-treatment results
× 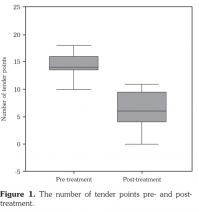 Figure 1. The number of tender points pre- and post-treatment.
× 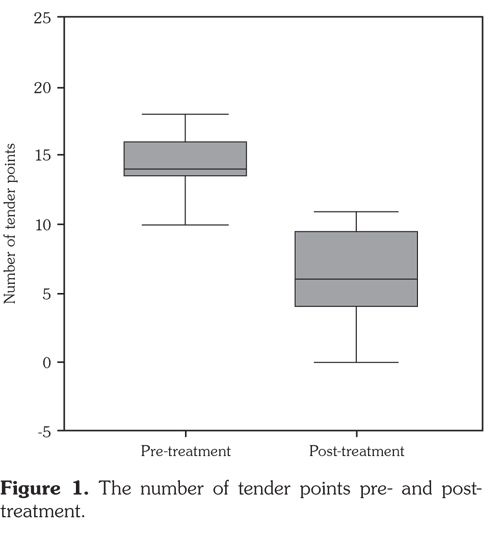 In this study, the effect of H. pylori eradication on the number of tender points, sleep quality, depression, and anxiety were investigated in H. pylori-positive fibromyalgia patients suffering from dyspepsia. As a result, the number of tender points was significantly reduced at the three weeks post-treatment evaluation compared with pre-treatment. However, there were no significant differences between pre- and post-treatment results in terms of the PSQI, BDI, and BAI scores. In addition, we found that the prevalence of dyspepsia and H. pylori positivity in our fibromyalgia cohort were approximately 40% and 78%, respectively. There was no control group including non-fibromyalgia individuals in our study, however, these rates were similar to results of earlier studies performed on the general population in Turkey(11,12).

Studies focusing on extragastric manifestations of H. pylori infection such as sideropenic anemia and idiopathic thrombocytopenic purpura have been published(5), however, literature regarding the effect of this microorganism on FMS is rather limited(4). To date, only two studies investigated the possible association between H. pylori and FMS. In these studies, Malt et al.(13) reported similar rates of H. pylori seropositivity in patients with FMS (n=28) and controls (n=39), while Akkaya et al.(4) found that the prevalence of immunoglobulin (Ig) G anti-H. pylori antibodies was significantly higher in fibromyalgia patients (67.7%) compared to controls (43.9%). However, among these patients, there were no significant differences in the clinical manifestations of FMS between H. pylori seropositive versus seronegative patients(4).

The main symptom of FMS is widespread chronic pain. This is a neuropathic pain considered to be related to central nervous system sensitization and associated with sympathetic hyperactivity(14). However, what triggers or causes these changes of the nervous system is not exactly known. In our study, we observed that H. pylori eradication provided significant decrease in the number of tender points at the end of treatment compared to baseline. This effect may be via inhibition of H. pylori related pro-inflammatory cytokines and cytotoxins and via elimination of gastritis, which is associated with local and systemic inflammatory and immunological responses and develops in all infected persons(7).
Furthermore, sleep disturbance, depression and anxiety are associated with chronic pain conditions. However, according to results of our study, these disorders did not improve with H. pylori eradication, although there was a significant decrease in the number of tender points post-treatment. In previous studies, it has been recommended that predominant symptoms must be taken into consideration when developing a treatment plan, as FMS has a heterogeneous nature causing difficulties in diagnosis and treatment(1). In accordance with this recommendation and our study results, it can be suggested that H. pylori eradication is not enough to resolve all symptoms of fibromyalgia, however, it may be an effective treatment if the predominant symptom is pain.

On the other hand, the present study has some limitations that need to be taken into account in terms of the study design and its contributions. Firstly, the study was performed with only H. pylori-positive patients who had dyspeptic complaints. As a result, our results cannot be generalized to all FMS patients. Secondly, drugs used in the study were broad-spectrum antibiotics. Therefore, other bacteria may also be affected and thus, chronic activation of the immune system against pathogenic bacterial overgrowth, which is related with fibromyalgia symptoms,(15,16) may be inhibited by the treatment. Thirdly, the study had a small sample size and a short-term follow-up period. Future studies with larger populations and long-term follow-up are needed.

In conclusion, we believe that this is the first study to investigate the effect of H. pylori eradication on fibromyalgia symptoms. The study results demonstrate that H. pylori eradication has a positive effect on the number of tender points. However, there is a need to design further studies to verify the results.