Coexistence of Ankylosing Spondylitis With Morphea: A Case Report

Morphea, which is also known as localized scleroderma, is a disorder caused by excessive collagen deposition and characterized by the thickening and hardening of the skin. Unlike systemic sclerosis, morphea lacks features such as Raynaud phenomenon, joint involvement, sclerodactyly, and constitutional symptoms. It may be associated with drug use and is occasionally found together with other autoimmune diseases. In this article, we report a 60-year-old woman who was admitted to our outpatient clinic due to HLA B27 + ankylosing spondylitis with axial involvement and morphea. Her disease was able to be managed with exercise and non-steroidal antiinflammatory drugs, however, a 10¥7 cm diameter atrophic lesion of medium hardness was identified on her left shoulder. The histopathology of the lesion was compatible with morphea, and improved with topical steroid treatment. Although the concomitance of autoimmune diseases is frequent, there is no coexistence of morphea with ankylosing spondylitis in the literature, except a case who was considered to be associated with the adalimumab use. Despite limited data, however, common autoimmune pathogenesis may be seen in association with ankylosing spondylitis and morphea.

Morphea, also known as localized scleroderma, is a chronic cutaneous disorder caused by excessive collagen deposition, and characterized by fat tissue atrophy and by thickening and hardening of the skin.[1] Morphea can be seen in different shapes on the body and extremities, from small plaques to large lesions causing cosmetic problems.[1] Raynaud's phenomenon, joint involvement, sclerodactyly, and constitutional symptoms found in scleroderma are not present in morphea. Morphea is usually asymptomatic, and the development of lesions is typically insidious. Extracutaneous involvement is present in 20% of patients.[2] Extracutaneous manifestations are more common in the linear and generalized subtypes.[2] Although known to be an autoimmune-based disorder, the pathogenesis of morphea is still unclear. Radiation therapy, chimerism, infection or vaccination, drugs, trauma, hormones and genetic factors are implicated in the etiology. It may be also associated with the use of drugs such as bleomycin, D-penicillamine, vitamin K1, and L-5-hydroxytryptophane plus carbidopa, and is occasionally found in association with other autoimmune diseases.[3,4] We present herein a case of ankylosing spondylitis (AS) who developed morphea and was followed up in our rheumatology outpatient clinic.

A 60-year-old woman was followed up in our outpatient clinic due to human leukocyte antigen (HLA) B27 + AS with axial involvement. Although she had back pain for 30 years, she was first diagnosed two years ago when admitted with low back pain, morning stiffness of one hour and difficulty in reaching top shelves. On routine physical examination, a 10x7 cm diameter atrophic lesion on her left shoulder was detected by inspection. It had medium hardness; was partly hyperpigmented and partly bright white in color, with no pain or itching (Figure 1). The patient was unable to remember the exact date for the beginning of the lesion, however suggested that it might have started five years ago. On physical examination, the modified Schober's test and chest expansion were both 2 cm, while the occiput-to-wall distance was 13 cm. Her scores of the Bath Ankylosing Spondylitis Disease Activity Index, Bath Ankylosing Spondylitis Functional Index, and Bath Ankylosing Spondylitis Metrology Index were 5.2, 4.6 and 7.2 respectively. The erythrocyte sedimentation rate was 20 mm/hour and the C-reactive protein was 1 mg/dl (0-0.5 mg/dl). Complete blood count (WBC 6.53x103, hemoglobin 13.7 g/dl, PLT 33x103), liver and kidney function tests were normal. The pelvis X-ray showed bilateral grade III sacroiliitis. Her medical history revealed a recently diagnosed hypertension and type 2 diabetes mellitus. Her family history was negative for spondyloarthropathy and morphea. Her AS disease was kept under control with exercise and non-steroidal anti-inflammatory drugs. She was consulted to the dermatology clinic. Initially, lichen sclerosis et atrophicus, atrophoderma of Pasini-Pierini, sarcoidosis, mycosis fungoides, post-inflammatory hyperpigmentation were considered in the differential diagnosis of our case. A skin biopsy was obtained and the histopathology of the lesion showed atrophy of the epidermis, the presence of rough collagenized fibers in the reticular dermis, sclerosis, atrophy in the skin junctions, and mild mononuclear inflammatory cell infiltration on the border of the deep dermis and the dermis-subcutaneous adipose tissue, all of which are consistent with morphea (Figure 2). Once examined for systemic sclerosis, there was no specific finding such as sclerodactylia or Raynaud's phenomenon. On immunological tests performed for other rheumatic diseases, rheumatoid factor, antinuclear antibody (ANA), anti-double stranded DNA, anti-Smith, anti Ro, anti La and anti Scl70 antibodies were found to be negative. Borrelia anti immunoglobulin M, anti-immunoglobulin G were also negative. 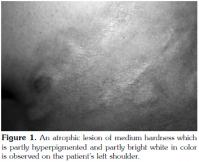 Figure 1. An atrophic lesion of medium hardness which is partly hyperpigmented and partly bright white in color is observed on the patient's left shoulder.
× 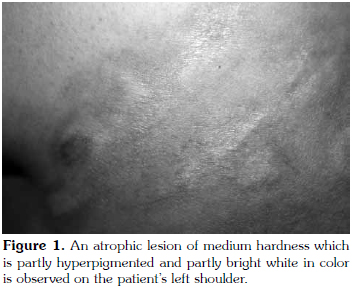 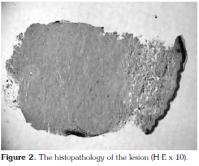 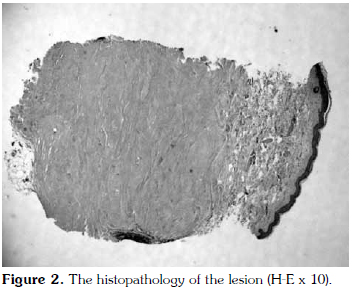 As a result of clinical, pathological evaluation and laboratory examination, the patient was diagnosed with circumscribed morphea (localized scleroderma). She had only one lesion and topical clobetasol propionate was applied once a day as the treatment. Clinical improvement in the lesion was evident by the end of six weeks. In the clinical follow-up, there was no new lesion and recurrence was not seen in the old lesion.

Morphea occasionally coexists with systemic lupus erythematosus, vitiligo, psoriasis, type 1 diabetes mellitus, and other autoimmune diseases such as autoimmune thyroiditis.[4] Its association with rheumatic diseases such as rheumatoid arthritis and erosive hand osteoarthritis were also reported.[4,5] In a patient with osteoarthritis, morphea lesions occur due to contact with sunlight and the use of hydroxychloroquine. Since an attempt for the use of hydroxychloroquine and ultraviolet A1 in particular was made in the treatment of morphea, the unexpected onset of lesions was interesting.[5]

Drug-induced morphea is only rarely reported,[6-8] however, non-steroidal antiinflammatory drugs-induced morphea has not been reported in the literature. Lesions of superficial circumscribed morphea often undergo gradual spontaneous resolution over a three to five-year period. Limited disease can often be managed with topical therapy or lesionlimited phototherapy; however, patients tend to develop new lesions over their life times. Initial presentation with generalized morphea and/or positive baseline ANA is associated with a poorer prognosis and worsening disease.[9]

Patients who tend to develop new lesions over their lifetimes have been mentioned in the literature: In a review of 245 adult and pediatric morphea cases concomitant with spondyloarthropathy were described in three patients.4 Ankylosing spondylitis associated with systemic sclerosis has been also reported,[10-

Morphea is considered to have an autoimmune background with immune activation.[14] CD4+ T helper (Th) cells play an important role and it is also considered that Th1, Th2, and Th17 and associated cytokines may contribute equally to the pathogenesis of morphea.[15] Similar to morphea, AS is an inflammatory disease with immune activation and recent studies have described the role of Th17 and cytokines as being involved in their development, as interleukin 17 and interleukin 23 can play a role in the pathogenesis of the disease.[16] The similarity of immunity of the two diseases may have a role for co-existence in the same patient.

A correlation between the co-existence of morphea and severity of AS has not been mentioned in the literature. The frequency, severity and the repeatability of morphea patients with AS has not also been addressed in the literature due to the rarity of this co-existence. In our case morphea developed 25 years later from the onset of inflammatory back pain. On the contrary, occurrence of the arthritis and sacroiliitis was shown after 16th year of diagnosing the morphea.[13]

Family history may be informative in some rheumatic disorders. On the family history of 750 pediatric patients with morphea, their 82 relatives were positive for rheumatic diseases (47 RA, 11 scleroderma, 10 systemic lupus erythematosus and 17 others), however, no spondyloarthropathy was present.[17] In our case family history was negative.

In conclusion, such as morphea and AS with an inflammatory background and active immunity can exist in the same patient. Recent studies have showed the importance of Th17 and associated cytokines in the pathogenesis of these two diseases. Further studies should highlight the detailed molecular-based mechanism in such diseases.