Objectives: This study aims to determine the clinical features of juvenile dermatomyositis (JDM) in Turkish children.

Patients and methods: The clinical records of nine children with JDM who were followed up in the Department of Pediatric Nephrology and Rheumatology of Erciyes University Faculty of Medicine between January 1992 and December 2008 were reviewed retrospectively.

Results: The female to male ratio was 2:1. The median age at onset of the disease was 8.8 years (range 6.5-14 years), the median duration of symptoms before diagnosis was two months (range 10 days-72 months), and the mean time of follow-up was 49.5 months (range 2-96 months). The main presenting complaints were arthritis/arthralgia, myalgia, an impaired ability to walk, and skin rashes. Eight patients received oral steroids as the initial therapy. Additionally, two patients received intravenous methylprednisolone, and five received non-steroidal antiinflammatory drugs during the follow-up. Three patients received methotrexate, and one received cyclosporine A. The median time to treatment response was 60 days (range 10-70 days). Pathological proteinuria was found in two patients. Subcutaneous calcinosis developed in one patient. Skin and soft-tissue infections occurred in two patients. Other complications seen during the follow-up were malnutrition, obesity, depressive mood, ototoxicity, muscle weakness, osteoporosis, and contractures.

Conclusion: Although juvenile dermatomyositis is a rare disease in childhood, it may have severe complications.

Juvenile dermatomyositis (JDM) is a vasculopathy of the skin and muscle and is the most common idiopathic inflammatory myositis in children with an estimated annual incidence of 2-3 per million children. In addition to the involvement of skin and skeletal muscles, JDM can affect other organs which may cause severe or life-threatening complications. Rash and muscle weakness of specific distribution are the most important diagnostic clues.[1-3] Early diagnosis and aggressive treatment can lead to remission and prevention of severe complications.[1,4,5] This is the first study reviewed which takes into account all clinical, laboratory, and pathological features of Turkish children with JDM treated at our center over the last 16 years.

Table 1. The most common findings of juvenile dermatomyositis at presentation
× 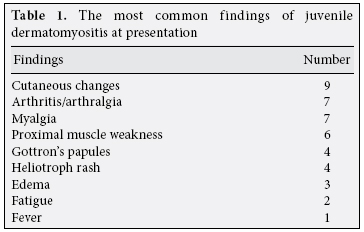 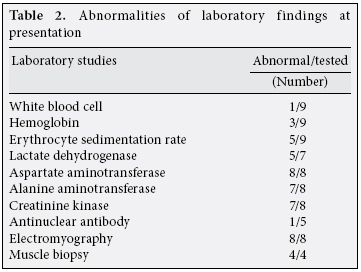 All patients received oral steroids as the initial therapy, except for one patient whose illness was chronic at the time of diagnosis. Additionally, two patients received intravenous (iv) methylprednisolone, and five received nonsteroidal anti-inflammatory drugs. Three patients were given methotrexate, and one was given cyclosporin A. The median time of response to treatment was 60 days (range 10-70 days; table 3). 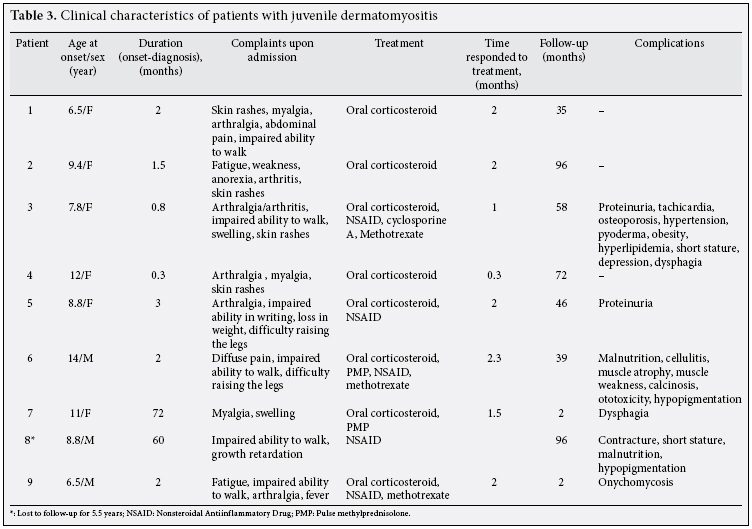 Vasculitis of the eye was determined in one patient (figures 1 and 2). Pathological proteinuria was determined in two patients. A renal biopsy was performed on one child. The renal biopsy specimens were studied by light microscopy and immunofluorescence, and the findings of the biopsy were normal. Subcutaneous calcinosis developed in one patient. Skin and soft-tissue infections occurred in two patients. Other complications seen on followup were malnutrition, obesity, depression, ototoxicity, muscle weakness, osteoporosis, and contracture (table 3).

Figure 1. Fundoscopy showed a microangiopathy in the (a) left and (b) right eye at admission to our department.
×

Figure 2. Vasculitis was demonstrated in the bilateral eye on fundus fluorescein angiography.
×

This retrospective analysis describes the clinical spectrum of JDM in the pediatric population from a single tertiary center.

Although the etiology of JDM is unknown, it is considered that infectious agents play a role as triggering factors.[1-3] Prior to the occurrence of JDM, our three patients had a history of having upper respiratory tract infections. Rider and Miller[9] reported that hepatitis B, measles, mumps, and rubella (MMR), typhoid, and cholera vaccinations were triggering factors in juvenile idiopathic inflammatory myopathies. One of our patients had a history of measles vaccination prior to the onset of symptoms.

Only four patients complained of rash, even though all patients were found to have skin rashes upon examination. If a careful physical examination is not performed, the rash may be overlooked.

We found that one of our patients had retinal vasculitis. Retinopathy is very rarely observed in dermatomyositis (DM) and JDM.[10] There are a few case reports about retinopathy in JDM.[11-13] Furthermore, Akikusa et al.[14] recently retrospectively studied the eye involvement in 82 patients with JDM. Two of these patients were found to have retinopathy. In a case report regarding a 14-year-old patient with JDM reported by Wienfield, retinopathy presented with transient visual loss.[11] In our case, the patient had no sign of retinopathy. It has also been reported that retinopathy leads to irreversible visual loss.[15] Although retinopathy is rarely observed in patients with JDM, periodic eye examinations should be performed since retinopathy may lead to the persistent loss of vision which would affect the quality of life.

We found proteinuria in two patients. Proteinuria had a transient nature in one patient whereas it was persistent in the other patient. Renal involvement is rarely observed in JDM and DM. Renal pathologies, such as membranous nephropathy, IgA nephropathy, and ATN, were reported.[16-18] We consider that the performance of urine examinations in the follow-up of the patients is important so as not to overlook renal involvement.

We observed hypertension and sinus tachycardia in one patient who had been diagnosed on an echocardiogram as having a deformation of the mitral front fibers. Cardiac involvement is rare in JDM. In a study, three patients had tachycardia among 35 patients with JMD.[19] Heart murmurs, pericarditis, and electrocardiogram (ECG) abnormalities are also seen in JDM.[10]

We observed dysphagia in our two patients. Esophageal symptoms occur in 6-41% of patients with JDM.[20] The involvement of the pharynx muscles and upper esophagus may lead to dysphagia. Owing to an increased aspiration risk, nutrition with a nasogastric tube is recommended until the improvement of dysphagia.[21,22]

Skin-subcutaneous infection developed in our two patients. When the infection developed, JDM in both patients was active, and they were using steroids. Onychomycosis was observed in one patient who received steroids and methotrexate therapy at the time onychomycosis occurred. We considered that the tendency toward infection may have increased due to JDM itself and/or immunosuppressive agents.

Calcinosis is a late finding of JDM and is observed one to three years after disease onset.[2,3] We observed calcinosis in one patient. As for this patient, JDM had run a chronical course and calcinosis developed six months after the presence of cellulitis in his extremities. Infection may have had a triggering effect on the calcinosis development.

Two patients developed hypopigmentation. During the follow-up of these patients, muscle weakness did not improve completely, atrophy developed, and knee movements were restricted. These two patients had persistent muscle inflammation, and it is very likely that their skin disease was also active, causing the hypopigmentation.

Furthermore, we observed obesity, short stature, autotoxicity, and osteoporosis as treatment complications in our patients.

Finally, based on our results, although JDM is a rare disease in childhood, it may have severe complications. All children with JDM should be followed up closely. This study had limitations because it was conducted at a single center, and the patient number was relatively small. Multicenter studies are needed to fully define the clinical spectrum and outcome of JDM in Turkish children.