Relationship Between Clinical Findings, Quality of Life and Functional Disability Related to Disease Activity in Patients with Ankylosing Spondylitis

Objectives: In this study we evaluated the relationships between clinical findings, quality of life and functional disability related to disease activity in patients with ankylosing spondylitis (AS).

Ankylosing spondylitis (AS) is a chronic progressive, inflammatory disease predominantly affecting the sacroiliac joints and spine with possible involvement of other joints, entheses, and extra-articular structures. The pain, limitation of function and presence of organ involvement all contribute to the worsening of the patients' quality of life (QoL).[1]

Ankylosing spondylitis has considerable effect on the individual's QoL. In contrast to other rheumatic diseases, the consequences of AS on QoL is less defined.[2,3] The burden of illness in AS results from pain, reduced function and impaired well-being.[2,3] The determination of disability and QoL in AS can help to assess illness-related suffering and to develop management strategies. Quality of life measurements objectively reflect the actual effect of the disease on an individual and the extent of suffering.[2,4] Some patients reportedly develop functional disorders which have a negative impact on the QoL.[5]

The Bath ankylosing spondylitis disease activity index (BASDAI) is widely used as a subjective measure to assess disease activity and has proved to be valid, reproducible and responsive to change.[6] The value of combined instruments, such as the Bath ankylosing spondylitis metrology index (BASMI) and BASDAI should be investigated because the combined instruments might not have the same validity in all types of the disease.[6,7] The rate at which functional disability worsens during the lifetime of a given patient with AS fluctuates, and there is a significant variability of the progression rate between affected individuals as well.[1,8-10]

There is a need to investigate the influence of disease activity on health related QoL along with the clinical and functional condition in patients with AS in order to assess disease management approaches. The aim of the present study was to evaluate the association between clinical findings, QoL and functional disability in relation to disease activity in patients with AS.

Seventy-three patients with AS (62 males, 11 females; mean age 33.3±9.5 years; range 17 to 60 years) who fulfilled the modified New York criteria[11] were included in this study. The mean age for female patients was 29.2±7.3 years and for males 34.0±9.7 years. The demographic data of patients including age, sex, marital status, education and duration of the disease, drug intake and peripheral involvement were recorded. The same physician evaluated all patients. All patients gave informed consent for participating except for one patient who was 17 year old. For this patient, permission was obtained from his parents.

The Bath ankylosing spondylitis metrology index was applied to all patients.[12-14] This index assesses cervical rotation, tragus to wall distance, lumbar side flexion, lumbar flexion (modified Schober's test) and intermalleolar distance. The modified lumbar and dorsal Schober's test, chest expansion, finger-tofloor distance, occiput-to-wall distance, and cervical flexion and extention, and chin-to-chest distance were evaluated. Chest expansion was measured circumferentially around the chest wall at the level of the fourth intercostal space with the subject standing with hands on head and arms flexed in the frontal plane. Chest expansion was recorded in centimeters. The total range of thoracolumbar movement in the sagittal plane was evaluated by the modified Schober's test and finger-to-floor distance.

The Bath ankylosing spondylitis functional index (BASFI) was used to assess the functional disability of the patients. The BASFI is comprised of 10 items based on the ability to perform and cope with activities of daily living. Each is scored on a 10 cm visual analog scale (VAS) reflecting status over the past month. The mean of the 10 scales generates the score, with 10 denoting the worst possible functional status.[15]

Disease activity was evaluated by the BASDAI and VAS. The BASDAI is a measurement of disease activity and consists of six questions related to the live symptoms of AS: fatigue, spinal pain, joint pain and swelling, areas of local tenderness and morning stiffness. A 10 cm VAS was used to measure the patient responses to each question. A score between 0 and 10 was obtained for each question and the mean of two questions related to morning stiffness was used. All measurements were performed at noontime, and the same clinician did all patient assessments.[16-18] We defined two score levels with a BASDAI score <4 as a mildly active disease (n=34), and a BASDAI score ≥4 indicating moderate-severe disease activity (n=39).[19]

Statistical analysis
Statistical package for social sciences software (SPSS Inc., Chicago, Illinois, USA), version 11.0 for windows was used for all statistical analysis. Baseline demographic and clinical characteristics of AS patients who had low and high disease activity were compared using independent samples t-test for parametric variables and Mann Whitney U-test for nonparametric variables. Pearson's and Spearman correlation analyses were used for assessing relationships between results of BASDAI and BASFI, BASMI, SF-36, and clinical and laboratory parameters according to normal or skewed distribution pattern of data respectively. Associations between two categorical variables were measured by Chi-square test. The level of significance was set at P value less than 0.05.

The ratio of patients using nonsteroidal antiinflammatory drugs (NSAIDs) was 43.8%. The ratio of patients taking rational disease-modifying antirheumatic drugs (DMARD) was 25.8%, and 12% were taking anti-tumor necrosis factor-alpha (TNF-α) agents. When we investigated the combination therapy, 56.7% of the patients were receiving an additional drug and 17.9% had two additional drugs in combination. The most commonly used DMARD was sulphasalazine (SLZ). 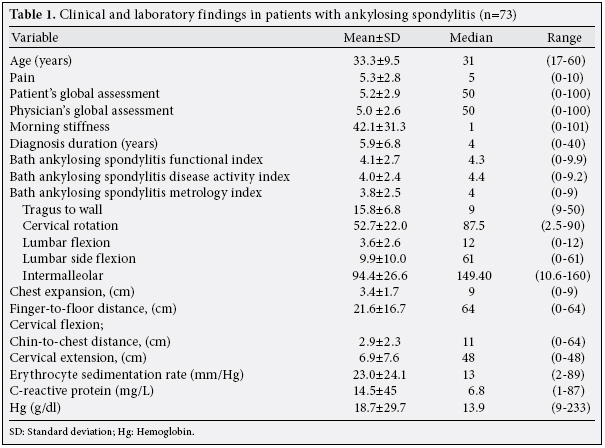 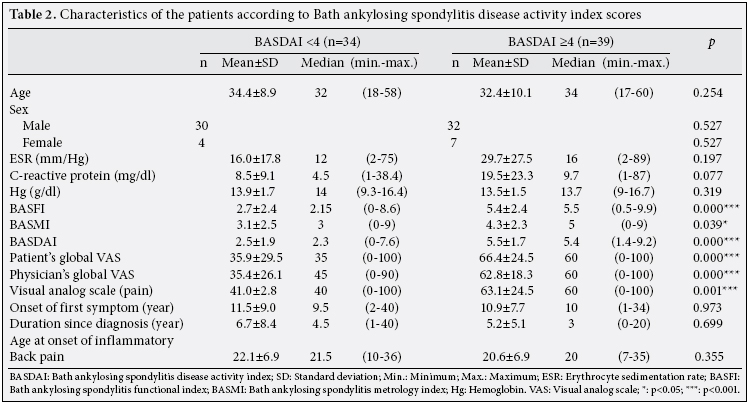 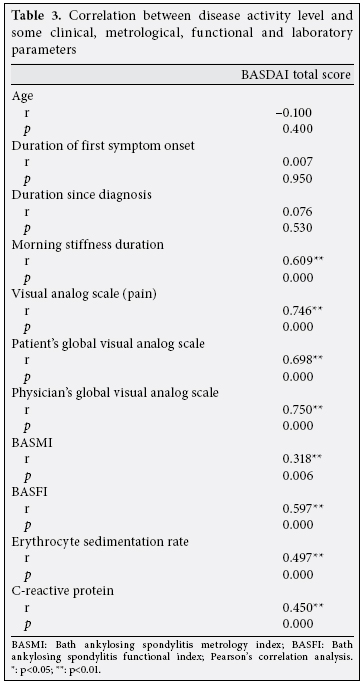 The correlation between disease activity level and SF-36 subscores in patients with AS is given in table 4. There was a significant relationship between BASDAI score and physical function (r=–0.788), physical role (r=–0.593), bodily pain (r=–0.634) and emotional role (r=–0.581). 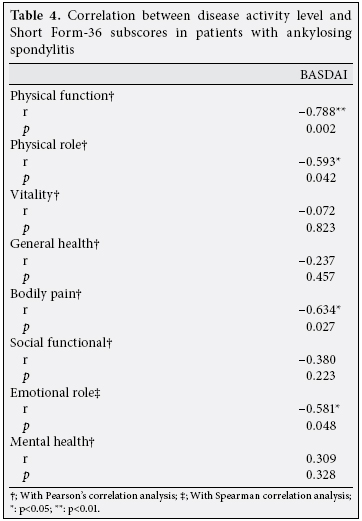 The recent development of valid and reliable outcome measures for AS disease activity, functional impairment and metrology has improved the assessment of disease status.[21,22] These outcome measurements not only provide excellent tools for AS research, but they also present the opportunity to enhance health status assessment and patient care in the clinical setting.[23]

Ankylosing spondylitis is known to affect working ability which leads to disability in affected patients. Zink et al.[3] estimated 8.7% unemployment and 10.4% early retirement in AS patients from the German database.[2,3] In a study assessing the working ability of AS patients, only 30% were found to be unable to work at all.[2] Dalyan et al.[30] concluded that 73% of AS patients were still in gainful employment and 15% were unemployed.[2,30] In this study, the results of our data were similar to those of previous studies in which 53.4% of the patients were employed and the rates of unemployed and early retirement were estimated at 26% and 2.7% respectively. Employed patients mostly had BASDAI <4 (61.7%), whereas unemployed patients had BASDAI ≥4 (30.7%). This can be explained by severe disease activity, and, in part, by the education, socioeconomic factors and various work-related factors that substantially contributed to withdrawal from the labor force in AS patients.

Dalyan et al.[30] reported spinal mobility indices were the most powerful predictors of functional loss in AS patients,[2,28] whereas disease activity and metrologic index scores (particularly the modified Schober test) were the strongest variables predicting functional disability.[2] The correlation between BASDAI and BASMI was poor in a Swedish study. These findings may be due to the fact that disease activity and range of motion are different variables which necessitate a separate evaluation. Therefore, the authors considered that disease activity has great importance for the patient's well-being.[28] However, both BASDAI and BASMI showed significant improvement after eight weeks of a home exercise program. Kaan and Ferda,[31] showed correlations between BASDAI total score and chest expansion, wall-occiput distance, chinmanubrium distance and lumbar Schober's. In the present study, disease activity showed significant association with BASMI scores, patient and physician global assessment. In addition, BASMI, finger-tofloor distance, chronic low back pain, patient's global VAS and physician global VAS measurements were statistically higher, and modified Schober's and cervical rotation measurements were lower in the group with BASDAI ≥4 scores. High disease activity seems to be an important factor which affects spinal mobility parameters and patients' general well-being. This is important both for daily life and working ability.

Brandt et al.[36] found a significant correlation between BASDAI and BASFI. Bodur et al.[24] reported significantly higher BASFI scores in the patients with high BASDAI scores (>4) compared with low BASDAI score (<4). Physical functional outcome is related to both disease activity and resulting damage.[31] Zhao et al.[34] showed that functional disability had a correlation with disease activity. In our study, BASFI score was higher in the group with BASDAI ≥4, and BASDAI total score was significantly correlated with BASFI score.

Patients suffering from chronic pain syndromes may have distress, negative feelings and dissatisfaction in many aspects of life. These patients typically have poor QoL status as is mostly found with RA patients.[2] The QoL has been determined as the perception of the individual of his or her situation in the current culture and value system. While health situation and functional situation are predominantly related to the physical condition, the term ‘quality of life' includes the wishes, expectations and emotional responses of the individual related to his/her health.[5,37] Individuals with chronic diseases cannot perform their daily living activities sufficiently. Owing to the combination of all these factors, the QoL of the individuals may be affected negatively.[5] There are still no standard recommendations about QoL instruments for AS.[28] Bostan et al.[2] showed that patients with AS had poorer QoL. The most important determinants in selfreported QoL were the levels of functional disability and disease activity.[2] Turan et al.[5] found no significant correlation between BASDAI and subgroups of SF-36 (except general health).[2] Vesović-Potić et al.[28] showed no significant differences in spinal mobility measures and the SF-36 subscore scores between the education level group although some studies indicate that a low education level is associated with worse QoL. Zhao et al.[34] showed that QoL did not have any correlation with disease activity. Quality of life takes into account the effect of impairments and disability on the patient in addition to other influences including personality, social and physical environment, economic resources, and culture.[33] In the present study, there were significant correlations between disease activity and subscores of SF-36 physical function, physical role, bodily pain and emotional role. It is concluded that disease activity causes poorer QoL and particularly affects physical health subscores of general health quality.

Finally, the limitations of this study are a lack of patient follow up and also a lack of evaluation of the physical component summary (PCS) and mental component summary (MCS) of SF-36. Thus, there is a need to design larger studies for the reliability and validity of the summary component of SF-36 which has not yet been studied for a Turkish version. Further prospective longitudinal studies are needed to establish the definitive relationships between clinical findings, functional disability and QoL related with disease activity in patients with AS.