Tumor necrosis factor-alpha (TNF-α) plays a crucial role in the development of autoimmune diseases, and anti-TNF-α agents are used in the treatment of this group of diseases. However, some adverse events such as various autoimmune diseases can occur with use of these agents. In this report, we present a female case who was diagnosed as bullous pemphigoid while receiving adalimumab for rheumatoid arthritis. (Turk J Rheumatol 2010; 25: 214-6)

Bullous pemphigoid is an autoimmune skin disease characterized by development of antibodies against mucous membranes and skin. Patients usually present with erythematous and itchy lesions progressing to large number of sensitive bullous lesions; it occurs more frequently in the elderly[1]. Bullous pemphigoid may occur due to chronic autoimmune diseases or certain drugs. In this article, we report a case who developed bullous pemphigoid during anti-tumor necrosis factoralpha (TNF-α) (adalimumab) treatment for rheumatoid arthritis.

A 65-year-old female patient was admitted in our clinic with widespread erythema, especially on the knees, elbows and back, and bullous skin lesions concentrated on the lower abdominal region. The patient was diagnosed with rheumatoid arthritis 10 years before and had used different drugs. The patient's treatment was continued with prednisolone (4 mg/day), methotrexate (15 mg/week), adalimumab (40 mg/2 weeks), folic acid (5 mg/day), and lansoprazole (30 mg/day) for one year. She described approximately two hours of morning stiffness. Physical examination of metacarpophalangeal (MCP) joints of both hands revealed swelling and increased heat. Both knees had crepitation and limitation of movement. Skin lesions suddenly appeared approximately one week before and increased within a few days. The widespread erythematous bullous lesions were present on her knees, wrists, elbows and back (Figures 1, 2 and 3). Arterial blood pressure was 120/70 mmHg and pulse was 76/min. Other system examinations were normal. 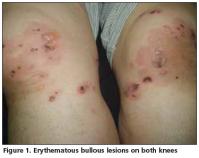 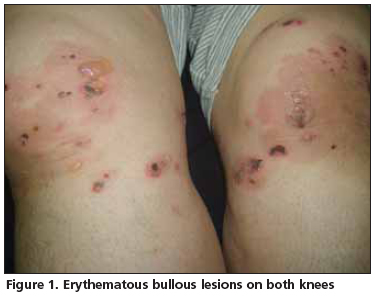 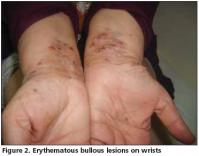 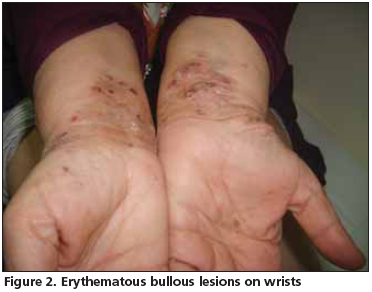 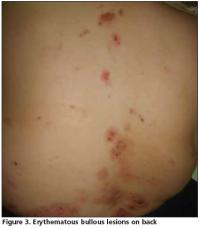 Figure 3. Erythematous bullous lesions on back
× 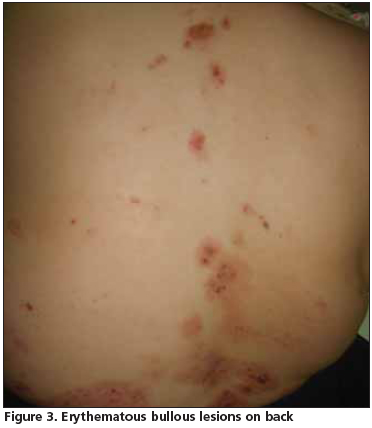 After dermatological consultation, the patient's lesions were diagnosed as bullous pemphigoid. The patient had already stopped her treatment. Treatment was restarted with prednisolone 60 mg/day and was continued by decreasing the prednisolone dose. The reduction in skin lesions was observed after two weeks of treatment.

The lesions begin as an urticarial plaque on the body and extremities and are located mainly in the lower abdominal region, flexor side of extremities and on the inner side of the thigh; oral mucous membrane involvement is rare.

Bullous pemphigoid may be associated with other autoimmune diseases such as diabetes, pernicious anemia, rheumatoid arthritis, multiple sclerosis and chronic inflammatory diseases such as lichen planus, psoriasis vulgaris as well as some malignancies and drug use. It may occur due to penicillamine, ACE (angiotensin converting enzyme) inhibitors, B-adrenergic blockers, non-steroidal anti-inflammatory drugs, antibiotics, chloroquine, clonidine, nifedipine, antipsychotics, gabapentin, fluoxetine, omeprazole, or radiation[1].

Kijima et al.[3] identified a 68-year-old female patient who had used minocycline with a diagnosis of pharyngitis and developed bullous pemphigoid. Sudden-onset pemphigoid cases due to the use of penicillin, furosemide and simvastatin have also been reported[4-6].

TNF-α has played an important role in the pathogenesis of bullous skin disease in these patients, and high levels of serum TNF-α have been reported[7]. Use of anti-TNF-α agents in treatment has brought about after the relationship between TNF-α and pemphigoid has been revealed. Anti-TNF-α drugs are used effectively for the treatment of rheumatoid arthritis as well and various adverse events including infection, injection reaction, allergic reaction, malignancy, demyelinating syndromes, congestive heart failure, bone marrow suppression and autoimmune diseases have been reported. Although anti- TNF-α drugs are used successfully in the treatment of autoimmune diseases; several autoimmune diseases can develop as an adverse event. This paradox has been observed during the treatment of systemic lupus erythematosus, psoriasis, inflammatory bowel disease, and demyelinating diseases.

We suggest that adalimumab treatment may have caused the pemphigoid condition in our patient. On the other hand, rituximab, an anti-CD20, which reduces B lymphocyte CD20 surface antigen expression, is also used in the treatment of rheumatoid arthritis. Anti-TNF-α drugs have become widely used for treating systemic lupus erythematosus, multiple sclerosis and psoriasis, etc. Anti-TNF-α drugs may also lead to the emergence of these diseases.

How can we interpret two separate autoimmune diseases seen together in a patient with immune dysregulation? Should we use biological agents in the treatment of rheumatoid arthritis? Definite answers to these questions are difficult, but it should be kept in mind that bullous pemphigoid may occur in patients with rheumatoid arthritis and may be associated with anti- TNF-α drugs.