Objective: In recent years, increasing attention has been given to the role of reactive oxygen metabolites in the pathogenesis of inflammatory diseases such as rheumatoid arthritis (RA). The aim of this study was to elucidate plasma and especially erythrocyte oxidant and antioxidant status in RA patients and to assess the relationship between disease activity scores (evaluated by Disease Activity Score (DAS) 28 as mild, moderate and severe) and antioxidant status.

Materials and Methods: Fasting blood samples were obtained from 50 RA patients and 26 control subjects. DAS28 was used to evaluate the activity. Plasma and erythrocyte levels of malondialdehyde (MDA), xanthine oxidase (XO) and superoxide dismutase (SOD) were investigated in both groups.

Conclusion: These results suggest that increased plasma and erythrocyte MDA levels in RA patients, especially in those with severe activity, indicate an increased oxidative stress due to inflammation. Nonetheless, an increase particularly in erythrocyte SOD activity in moderate and severe RA patients suggests that the cellular antioxidant system might counterbalance the oxidant status in RA patients. (Turk J Rheumatol 2010; 25: 141-6)

Rheumatoid arthritis (RA) is a chronic, progressive autoimmune disorder of unknown etiology with symmetric erosive synovitis and sometimes with multisystem involvement[1]. It is characterized by a chronic hypertrophic synovitis leading to destruction of connective tissue and functional damage of cartilage and bone structures[2]. Long-term outcome of this disease is characterized by significant morbidity, loss of functional capacity and increased mortality[3].

The causes of RA have not been completely elucidated. Oxidative stress can play an important role in the pathogenesis of RA. Acute and chronic oxidant stress to the vascular endothelium is a serious causative factor of vascular endothelial dysfunction and plays an important role in the pathophysiology of some diseases, including diabetes[4], panic disorder[5] and inflammatory bowel diseases[6]. In recent years, increasing attention has been given to the role of reactive oxygen metabolites in the pathogenesis of inflammatory disease such as RA. Increased activity of free radicals, the unstable molecules associated with cell damage, is theorized to underlie the mucosal injury commonly seen in the various inflammatory diseases[7].

It has been suggested by several researchers that enzymatic and/or non-enzymatic antioxidant systems are impaired in RA, and that RA patients are thus exposed to oxidant stress[8,9]. Different activities of oxidant and antioxidant enzymes, namely xanthine oxidase (XO) and superoxide dismutase (SOD), have been reported[10,11]. It has also been supposed that RA patients are more prone to lipid peroxidation because of the reduced antioxidant defense system[12].

In this study, plasma and erythrocyte levels of antioxidant and oxygen-derived free radical status of patients with RA were investigated and compared with that of age- and sex-matched healthy controls. Additionally, relationships between these parameters and disease activity indices were assessed.

Patients and Disease Activity Assessment
Fasting blood samples were obtained from 50 RA patients and 26 healthy subjects. This study was approved by the Local Ethical Committee, and all the subjects gave their informed consent prior to their inclusion in the study. All patients were diagnosed as having RA according to the American Rheumatism Association criteria of 1987[13]. As the aim of our study was not to determine the specific effects of various treatments or dosage regimens, we only investigated the relationship of disease activity with plasma and erythrocyte oxidant/antioxidant levels. Neither control subjects nor RA patients had clinical or laboratory evidence of any disease such as diabetes mellitus or thyroid disease or any infectious disease that might have affected the parameters to be measured, and none of the subjects was a smoker or taking alcohol or an antioxidant agent (e.g. vitamins E, C). All patients were using disease modifying anti-rheumatic drugs (24 methotrexate (MTX), 17 MTX and sulfasalazine combination, 5 MTX and chloroquine combination, and 4 leflunomide). Fourteen patients who were using only MTX were taking low doses (<10 mg/day) of steroid. None of the patients was using biological agents. The demographic parameters of RA patients and controls are given in Table 1.

Biochemical Analysis
Sample collection and preparation
Blood samples obtained after overnight fasting were collected from the antecubital vein in polystyrene tubes containing potassium EDTA. The blood samples were centrifuged at 3000 rpm for 10 min at 4 °C to remove plasma and then the buffy coat on the erythrocyte sediment was separated carefully. Erythrocyte sediment was washed four times with 10-fold isotonic NaCl solution to remove plasma remnant. After each procedure, erythrocyte-saline mixture was centrifuged at 3000 rpm for 10 min at 4°C. Aliquots of the samples were transferred into polyethylene tubes to be used in the assay of MDA, SOD and XO levels. ESR and serum C-reactive protein (CRP) levels were estimated within two hours. Plasma and erythrocyte sediment samples were stored for 30 days at –80 °C until malondialdehyde (MDA), SOD and XO analyses were performed. After they were thawed, erythrocyte sediments were treated with four-fold icecold deionized water to obtain hemolysate.

CRP and ESR determination
Erythrocyte sedimentation rate and CRP were determined in whole blood and serum aliquots, respectively. ESR was determined according to the Westergren method and CRP by a nephelometric method (Dade Behring BN II, USA).

MDA determination
Malondialdehyde levels in plasma were measured with the thiobarbituric acid reaction by the method of Placer et al.[16] as described in previous studies[17]. The values of MDA were expressed as nmol/ml-1 for plasma and nmol/g Hb for erythrocyte.

XO activity determination
Xanthine oxidase (EC 1.2.3.2) activity was measured spectrophotometrically by the formation of uric acid from xanthine through the increase in absorbance at 293 nm[18]. A calibration curve was constructed by using 10-50 milliunits/mL concentrations of standard XO solutions (Sigma X-1875). One unit of activity was defined as 1 μmol uric acid formed per minute at 37°C, pH 7.5. Results were expressed as U/ml for plasma in 293 nm wavelength.

SOD activity determination
Total SOD activity (Cu/Zn and Mn) was determined according to the method of Sun et al.[19] and a slightly modified method by Durak et al.[20]. The principle of the method is based on the inhibition of NBT reduction by the xanthine/XO system as a superoxide generator. Activity was assessed in the ethanol phase of the supernatant after 1.0 mL ethanol/chloroform mixture (5/3, v/v) was added to the same volume of sample and centrifuged at 4000 g for 30 min at 4°C. One unit of SOD was defined as the enzyme amount causing 50% inhibition in the rate of NBT reduction. Activity was expressed as U/ml for plasma and U/g Hb for erythrocyte in 560 nm wavelength.

Statistical analysis
Statistical analyses were performed using SPSS for Windows (Versions 6.0 and 10.0, SPSS Inc., Chicago, IL, USA). Distribution of the groups was analyzed with one sample Kolmogorov-Smirnov test. Neither group showed normal distribution, so the nonparametric Bonferroniadjusted Mann-Whitney U test was performed on the biochemical variables data to examine differences among the groups. Bivariate comparisons were examined using Spearman's ρ correlation test. A p≤0.05 was accepted as statistically significant. 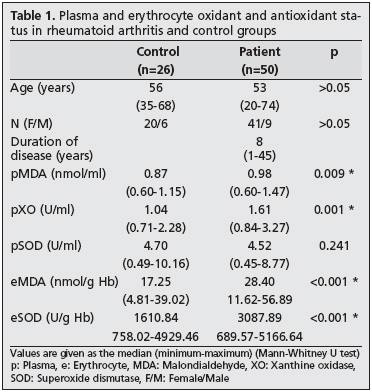 Table 2. B coefficients and odds ratios of variables in the final regression model
× 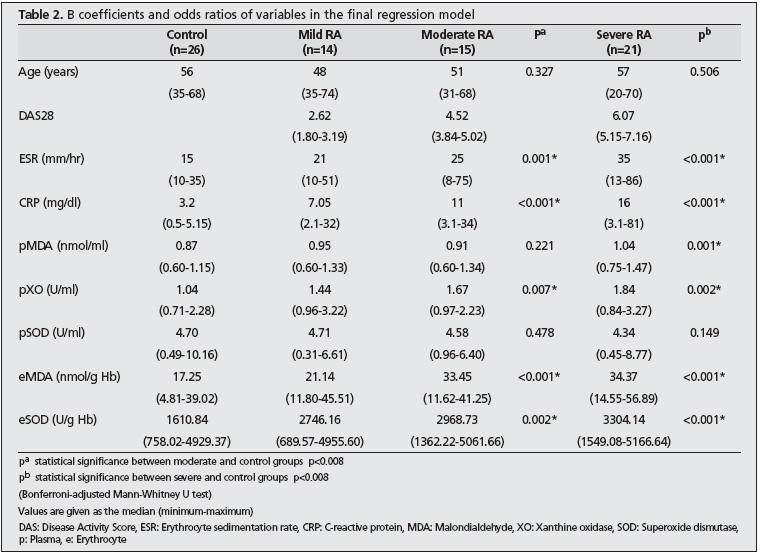 Rheumatoid arthritis is a chronic relapsing immunoinflammatory multisystem disease with predominant synovial proliferation and destruction of the articular cartilage and bone[28]. The etiopathogenesis of RA remains obscure despite extensive research. The pathogenesis of RA is multifactorial and recent research has implicated oxygen free radicals as a mediator of tissue damage[21]. It has been shown that, especially in RA, monocytes produce 2.7 times more oxygen radicals than controls[22]. Over-production of reactive oxygen species leads to lipid peroxidation and destroys the antioxidant defense systems[12]. Based on this hypothesis, several studies have been focused on oxidative stress in RA[8,9,12].

Lipid peroxidation can start by the attacks of free radicals on lipids. After a series of propagation reactions and hydroperoxide formation, these active substances decompose various end products, like MDA. It has been supposed that blood samples from patients with RA are more prone to lipid peroxidation owing to an impaired antioxidant defense system[12]. In our study, pMDA and eMDA levels were found to be significantly elevated in the patients with RA compared to controls (Table 1). This is in agreement with other studies in which higher MDA levels have been reported in patients with RA[9,23,24]. When we look at this finding with respect to disease activity levels, a significant increase was found in plasma levels of severe RA and erythrocyte levels of moderate and severe RA. We can suggest that oxidant injury is related to disease activity.

It is possible that disordered mitochondrial oxidative phosphorylation[25] leads to diminished production of toxic free radicals through the xanthine/XO system. These changes lead to accumulation of adenosine and of its breakdown products, xanthine and hypoxanthine, which can act as substrates for XO[26]. Oxygen radical production in this setting is thus thought to be in part the result of the action of XO[25]. In our study, pXO levels were high in RA patients; this increase was observed particularly in moderate and severe groups.

Mammalian cells have developed antioxidant defense systems to prevent oxidative damage and to allow survival in an aerobic environment[27]. These systems consist of nonenzymatic antioxidants-including nonprotein antioxidants with low molecular weights (vitamins A and E, beta-carotene, uric acid) and of enzymes such as SOD, catalase, glutathione peroxidase, and glutathione reductase. The activity of SOD, a catalyst for dismutation of superoxide radicals into H2O2 and into molecular oxygen, protects cell and tissues from superoxide radicals and other peroxides[28]. In several studies, lower activity of SOD[29] and no change in SOD[30] were shown. In our study, we found a significant increase in the activity of eSOD in severely active RA patients compared to RA patients with mild or moderate disease activity; however, we found no significant change in plasma SOD (pSOD) activity levels. With regard to these findings, it can be suggested that the antioxidant defense system protects tissue from oxidant injury in moderate and severe patients but at the cellular rather than plasma level.

Erythrocytes may be important in regulating oxidant reactions in the surrounding medium, thereby preventing free-radical-mediated cytotoxicity[31]. However, the relationship of disease activity of RA with erythrocyte activity of SOD and levels of MDA and XO is not clear. Our findings suggested that the levels of eMDA and the activity of eSOD were increased in RA patients, consistent with most of the previous studies[23,32]. On the other hand, Banford et al.[33] reported a significant decrease in eSOD activity in RA patients. In our study, the levels of eMDA and eSOD were significantly higher in the patients with moderate or severe activity. These findings suggest that cellular enzymatic antioxidant defense system precedes the equilibrium of oxidant and antioxidant status in RA patients.

The limitation of this study is, when we separated patients into groups according to disease activity, the groups were small. Therefore, studies with greater numbers of patients should be done in the future.

In conclusion, increased oxidative stress in patients with RA probably depends on their inflammatory response. Our results indicated that oxidative stress and lipid peroxidation were accelerated in patients with RA. Whereas this acceleration was highest in severe disease, the antioxidant system in erythrocytes is also significantly high. This increase suggests that cellular enzymatic antioxidant defense system precedes the equilibrium of oxidant and antioxidant status in RA patients.

In this regard, we highlight some therapeutic aspects, such as using high potential antioxidants that potentiate antioxidant defense mechanisms and reduce peroxidation, which may be beneficial in the management of RA.

Acknowledgments
We thank Orhan Nallı and Tayfun Yenikaynak for their contribution.

Conflict of Interest
None declared.