Effects of Therapeutic Ultrasound on Pain, Disability, Walking Performance, Quality of Life, and Depression in Patients with Chronic Low Back Pain: A Randomized, Placebo Controlled Trial

Objective: The aim of the current study was to evaluate the effects of therapeutic ultrasound on pain, disability, walking performance, quality of life (QOL) and depression in patients with chronic low back pain (CLBP).

Conclusion: Therapeutic ultrasound was shown to be effective on pain, some particular parameters of QOL, functional performance, and depression in patients with CLBP. (Turk J Rheumatol 2010; 25: 82-7)

Unless treated, CLBP may lead to significant disability in performing activities of daily living (ADL). The relationship between symptoms and the level of disability in performing ADL might be quite complicated. Social and psychological factors are known to be important in the development of CLBP and in the process of becoming a chronic problem. Prolongation of the painful period also has a significant negative impact on the daily functions of the patient [4].

Therapeutic ultrasound (US) is frequently used in the management of musculoskeletal disorders [5]. It has been demonstrated that US exerts thermal and mechanical effects which leads to an increase in blood flow and metabolic activity, thus enhancing the regeneration and elasticity of the target tissue [6]. The efficacy of US in musculoskeletal disorders is controversial due to the limited number of studies with qualified methodology [5,7].

The aim of this study was to determine the effects of therapeutic US, widely used in clinical practice, on pain, functional capacity, quality of life (QOL), and depression in patients with CLBP.

Forty-two patients (29 females and 13 males) with CLBP lasting for at least 3 months were included in the study. Patient age (years), body mass index (BMI; kg/m2), occupation, and duration of symptoms were recorded. All patients were examined thoroughly by the same physicians; routine laboratory test results as well as radiographs were evaluated. Patients were excluded from the study for the following reasons: evidence for acute radiculopathy; the presence of an inflammatory disease, neoplastic disease, spondylolysis, spondylolisthesis or sacroiliitis; lumbar disc herniation requiring surgical treatment; vertebral fractures; pregnancy. The study was approved by the local Ethics Committee and written informed consent was obtained from all patients.

Therapeutic ultrasound
In group 1, continuous US (Sonopuls 434, Enraf Nonius, Al-Delft, The Netherlands) was applied to the lumbar paravertebral region at a 1 MHz frequency at an intensity of 1 W cm2 for 10 minutes using a probe with an effective radiating area of 5 cm2.

Sham US was applied to the same region for the same duration in group 2 patients. The same US device was used. No current was applied but the device and the indicator lights were kept in the “on” position.

Functional performance
The 6-minute walk test (6MWT) was performed by measuring the distance (in meters) the patient could walk in 6 minutes.

The above-mentioned parameters were measured in all patients before and after treatment.

Table 1. Demographic characteristics of the patients
×

Pain, disability, and the functional performance in the study groups before and after treatment are presented in Table 2. A significant improvement was noted in all of these clinical parameters in both groups after treatment. When the groups were compared in terms of a change in clinical parameters, a significantly greater improvement was noted in functional performance and pain at rest in group 1 compared to group 2 (Table 3).

Table 2. Clinical parameters in the study groups before and after treatment
×

Table 3. Change in clinical parameters after treatment in the study groups
× 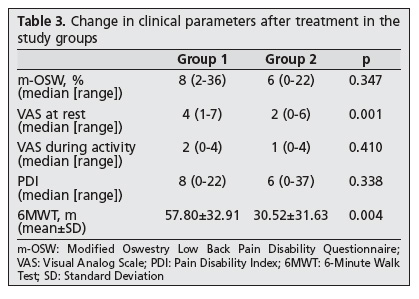 Depression and QOL in the study groups before and after treatment are presented in Table 4. A significant improvement was noted in the BDI scores and in the eight SF-36 domain scores in both groups after treatment. When the groups were compared in terms of a change in these parameters, a significantly greater improvement was noted in the depression, and physical and emotional role functioning in group 1 compared to group 2 (Table 5).

Table 4. Depression and quality of life scores in the study groups before and after treatment (All results are presented as the mean±standard deviation unless stated otherwise)
×

Table 5. Change in depression and quality of life scores after treatment in the study groups (All results are presented as the median [range])
× 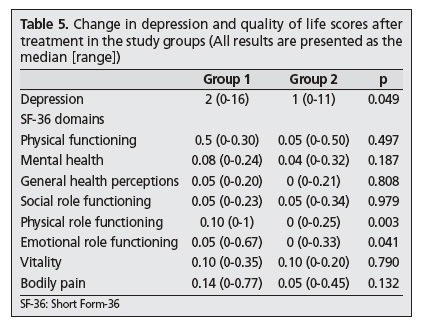 In addition to the mechanical and biological effects, the rise in temperature as a result of absorption and transformation of US energy in tissues is thought to play a significant role in the effectiveness of therapeutic US [24]. It has been suggested that pain threshold can be elevated by the increase in tissue temperature [25].

Besides classical knowledge, controversial reports also exist concerning the effectiveness of US in patients with CLBP. It was stated in the Philadelphia Panel that there was no scientific evidence demonstrating the effectiveness of US in CLBP [20,26]. In contrast, the ‘'Québec Task Force'' (QTF) reported that therapeutic US in combination with hot packs might be an alternative treatment method to reduce muscle spasm and symptomatic pain [27]. Grubisic et al. [28] evaluated the effectiveness of therapeutic US in 31 patients with CLBP. While they reported a reduction in pain intensity in the US group compared to the placebo group, they did not note a significant difference regarding the efficacy of the treatment (physiatrist and patient global assessment). Similarly, we noted that US treatment was effective on pain.

Chronic pain has been found to be associated with disability, depression, and decreased QOL [27,29,30]. It has been found that emotional disorders and depression are more frequent in patients with CLBP compared to patients with acute LBP [31]. The effects of pharmacologic treatment, psychotherapy, exercise, and combined physical therapy on pain, disability, and depression in patients with CLBP have been evaluated in several studies [32,33]. However, to our knowledge, no previous studies have evaluated the effects of therapeutic US on disability, depression, and QOL [21]. Our results suggest that therapeutic US provides improvement in depression and QOL through its pain-reducing effects.

There were some limitations to our study. It might have been better to design a treatment group in which US was performed as a single therapeutic agent. It is possible that the more significant improvement noted in the US group could be due to the direct effects of US, but also might be associated with the combined effect produced by US, hot packs, and exercise in this group. Functional improvement and pain reduction may most often be sufficient for patients to return to ADL and work. Long-term follow-up of patients is needed to draw a definite conclusion in this respect. We have not yet performed an assessment of long-term follow-up in our patients.

In conclusion, we believe that addition of therapeutic US to superficial heat and exercise increases the effectiveness of treatment in patients with CLBP. Moreover, we believe that our results may provide significant contribution to guidelines for the management of CLBP and further long-term studies on this subject, including larger patient samples, will also be beneficial.