An 80-year-old man with a history of diffuse large B-cell lymphoma (DLBCL) presented to the otolaryngology department due to hearing loss and fullness in the right ear. He was diagnosed with primary testicular DLBCL five years earlier, but complete remission was sustained after treatment. Computed tomography identified a soft-tissue mass in the right middle ear and mastoid cells, along with destruction of the petrous and sphenoid bones with soft-tissue mass and mucosal thickening in the maxillary sinus (Figure 1a-c). A weakly positive result was obtained for serum proteinase 3-anti-neutrophil cytoplasmic antibody (PR3-ANCA), at 5.2 IU/mL. The patient was referred to our department on suspicion of granulomatosis with polyangiitis (GPA) and otitis media with ANCA-associated vasculitis (OMAAV). He showed no other symptoms suggestive of systemic vasculitis, and serum soluble interleukin-2 receptor was slightly elevated to 643 U/mL (normal: <610 U/mL). The T2-weighted magnetic resonance imaging (MRI) showed signal hyperintensity in the right mastoid, suggesting mastoid effusion (Figure 2a). However, contrast-enhanced MRI revealed enhancement around the mastoid cells and cranial base and nodules in the maxillary sinus (Figure 2b, c). Diffuse large B-cell lymphoma was diagnosed from biopsied mucosa in the maxillary sinus, with no findings of granuloma or vasculitis. 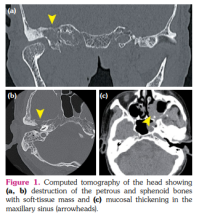 Figure 1. Computed tomography of the head showing (a, b) destruction of the petrous and sphenoid bones with soft-tissue mass and (c) mucosal thickening in the maxillary sinus (arrowheads).
× 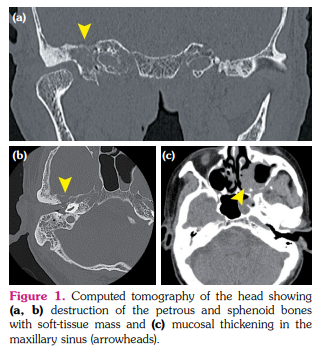 Figure 2. (a) T2-weighted magnetic resonance imaging (MRI) of the head showing signal hyperintensity in the right mastoid, suggesting mastoid effusion (arrowhead). Contrast-enhanced MRI reveals (b) enhancement around the mastoid cells and cranial base and (c) nodules in the maxillary sinus (arrowheads).
×

Positive results for ANCA are sometimes seen in patients with infection, inflammatory bowel disease or malignancy, including malignant lymphoma (ML), and not just in cases of vasculitis.[1,2] The precise mechanisms remain unclear, but neutrophil infiltration in response to tissue damage by ML or lymphoid cell-derived factors have been hypothesized to produce ANCA.[3] Some reports have described cases of ML mimicking GPA with craniocervical or otolaryngologic manifestations, such as sinusitis, otitis, nasal obstruction and discharge, masses in the nasal cavity, hypertrophic pachymeningitis and infarction of the pons.[4,5] Although GPA was suspected due to craniocervical or otolaryngologic manifestations in these patients, no kidney involvement was found.[4] Malignant lymphoma should, thus, be considered in patients without typical presentations such as glomerulonephritis, but differentiating between the two entities is practically difficult. A previous study comparing ANCA-positive patients with a clinical diagnosis of AAV from those without a clinical diagnosis of AAV demonstrated that a higher ANCA titer (≥4 times the upper limit of normal) and the number of affected organ systems (≥2 organ systems) may help to discriminate AAV from other diseases with positive results for ANCA.[2] A study investigating the characteristics of primary skull base lymphoma showed the usefulness of MRI to distinguish ML from other pathologies mimicking ML.[6] The combination of imaging findings, restricted diffusion on diffusion-weighted imaging, surrounding hyperostosis, bony erosion and/or marrow signal replacement, and heterogeneous contrast enhancement may raise suspicion for skull base lymphoma.[6] Our patient exhibited a lower ANCA titer, and a soft-tissue mass in the right middle ear and mastoid cells, along with destruction of the petrous and sphenoid bones and contrast enhancement of the mass on MRI without other organ involvements, suggesting ML. As a result, ML should be excluded using the degree of elevation of the ANCA titer, affected organ systems and MRI findings, when GPA limited to the ears, nose and throat is suspected.

In conclusion, physicians should keep DLBCL in mind as a potential mimic of GPA and OMAAV, and active histological examination is crucial to determine differential diagnoses.

A written informed consent was obtained from patient.