Results: The mother and her three daughters were diagnosed with SLE. The clinical characteristics showed that the patient and her mother were diagnosed with lupus nephritis. The eldest daughter had decreased renal function and lower serum albumin levels. Immunological index analysis showed that all four patients were positive for anti-SSA and antinuclear antibody (ANA), but that only the second daughter was positive for anti-double-stranded DNA (dsDNA). Complement 3 (C3) was significantly decreased in all patients, while evaluation of the Systemic Lupus Erythematosus Disease Activity Index (SLEDAI) showed that the second and third daughters had mild active SLE. The mother and eldest daughter were treated with prednisolone combined with cyclophosphamide, while the other two daughters were treated with prednisolone alone. The WES and Sanger sequencing analyses revealed an unreported missense T>C mutation c.2804 in the 15th exon of the CR gene in all four patients.

Systemic lupus erythematosus (SLE) is an autoimmune disease with a variety of clinical manifestations that can affect various bodily organs and tissues.[1] The incidence of SLE varies from 0.3/100,000 person-years to 23.2/100,000 person-years worldwide, and women are more frequently affected by age and ethnic group.[2] The etiology of SLE has not been well understood; genetic constitution, environmental triggers, and hormone milieu have been reported to contribute to disease development and activity.[3]

The pathogenesis of SLE is complex, involving the innate and adaptive immune systems, autoantibodies, and immune complexes, as well as the complement system.[4] In addition, different genetic and environmental factors are involved in its disease pathogenesis.[5]

Cumulating evidence shows that genetic factors play a central role in SLE. Previous studies have shown that lupus susceptibility is related to genetic factors, and several susceptibility sites have been clearly identified.[6,7] However, current genetic research cannot explain the entirety of SLE heritability, and other associated gene susceptibilities remain largely unknown.[8] Clinical observations indicate that complement activation is a core process in human SLE, with approximately 75% of SLE patients showing low C3 and C4 levels, particularly when renal is involved.[9]

Human complement receptor 2 (CR2) is encoded by a single gene with 20 exons located on chromosome 1q32.2.[10] A previous study demonstrated that CR2 could bind C3 degradation products during complement activation,[10] suggesting that CR2 might play an essential role in immunity.[11] Additional studies showed that polymorphisms of the CR2 gene were associated with osteonecrosis in SLE[12] and that polymorphisms such as rs3813946, rs1048971, and rs17615 were associated with lupus susceptibility in Caucasian and Chinese lupus patients.[13]

Next-generation sequencing technologies have been widely used for sequencing exomes, transcriptomes, and genomes,[14] particularly in the mutant landscape of genetic diseases.[15,16] In this study, we aimed to report the analysis of familial SLE by whole-exome sequencing (WES) and the discovery of a novel c.2804 (exon 15) T>C mutation in the CR2 gene.

This retrospective study was conducted at Three Gorges Hospital, Department of Nephrology between January 2017 and December 2018. A total of one Chinese familial SLE patients (median age: 30.25 years; range, 22 to 49 years) were enrolled in this study.

Genomic DNA was extracted from the peripheral blood of the patients using the QIAamp Blood DNA Mini Kit (QIAGEN S.p.A, Milano, Italy) according to the manufacturer's instructions. The whole-exome library was constructed using the IDT xGen® Exome Research Panel v1.0 (IDT, Iowa, USA) and sequenced on an Illumina Nova Seq 6000 series sequencer (Illumina, USA), with a sequencing coverage of the target sequence that was ≥99%. For mutation annotation and pathogenicity prediction, the raw data were cleaned and compared with the National Center for Biotechnology Information's Human Reference Genome (HG19) using the BWA software package. Synonymous changes and single nucleotide polymorphisms (SNPs) with minor allele frequency (MAF) ≥5% were removed (http://www.ncbi.nlm.nih.gov/projects/SNP). Non-synonymous changes were filtered using the SIFT software (http://sift.jcvi.org). Analysis of the function of mutated genes, their relationship to disease, and the interpretation of sequencing variations were based on guidelines from the American College of Medical Genetics and Genomics and the As Association for Molecular Pathology.

The clinical characteristics of the familial SLE

The baseline characteristics of the four family members, including the patient’s mother (Ia, mother), IIa (eldest daughter), IIb (middle daughter), and IIc (youngest daughter), are listed in Table 1 and Figure 1a. The proband patient (IIa, eldest daughter) was a 26-year-old woman who visited our department and reported a history of SLE. The mother and three daughters were all diagnosed with SLE according to the European League Against Rheumatism (EULAR) SLE 2012 criteria.[17] The patient and her mother had lupus nephritis. Patient’s mother and she had mild hypertension. The proteinuria in the mother was nephritic proteinuria, while the proband patient showed nephrotic proteinuria. The patients all showed a mild decrease in estimated glomerular filtration rate (eGFR) and low serum albumin levels. Our laboratory findings showed that all four patients were positive for the anti-SSA and anti-nuclear (ANA) antibodies, but the titers of ANA varied among the four patients. All patients showed hypocomplementemia, with titers of the ANA and anti-SSA antibodies (+++). One of the patient’s sisters showed anti-double-stranded DNA (dsDNA) positivity, while the other three patients were negative for this phenotype. The Systemic Lupus Erythematosus Disease Activity Index (SLEDAI) score was calculated based on symptoms. Renal biopsy showed that the proband patient had lupus nephritis IV according to the 2003 International Society of Nephrology (ISN)/ Renal Pathology Society (RPS) Classification of lupus nephritis (LN) (Figure 2).[18] 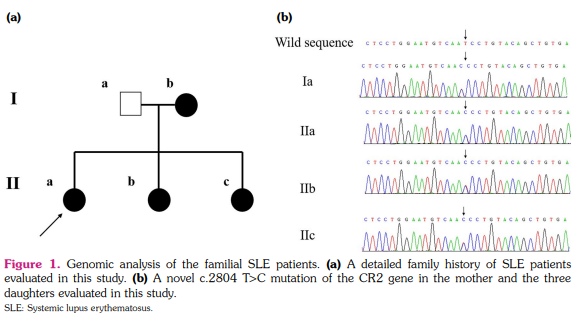 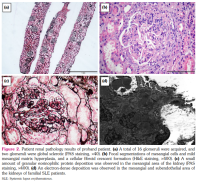 Figure 2. Patient renal pathology results of proband patient. (a) A total of 16 glomeruli were acquired, and two glomeruli were global sclerotic (PAS staining, x40). (b) Focal segmentations of mesangial cells and mild mesangial matrix hyperplasia, and a cellular fibroid crescent formation (H&E staining, x400). (c) A small amount of granular eosinophilic protein deposition was observed in the mesangial area of the kidney (PAS staining, x400). (d) An electron-dense deposition was observed in the mesangial and subendothelial area of the kidneys of familial SLE patients. SLE: Systemic lupus erythematosus.
× 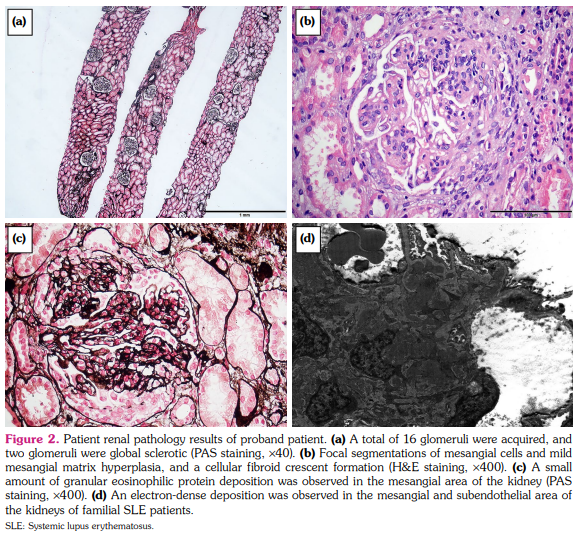 Using WES, there were about 41,130 variants in common among the mother and her three daughters, two gene mutations have been identified, ITGB3 with c.1960 (exon12) G>A mutation (reference sequence GenBank accession no. NM_000212). However, the ITGB3 mutation is inconsistent with the clinical manifestations of the patients. Another mutation is CR2 (reference sequence GenBank accession no. NM_001006658.2). This is a currently unreported nonsense mutation, characterized by a 2804 T>C nucleotide change (Figure 1b). Thus, the peptide isoleucine at site 935 was replaced by threonine (I935T) in the CR2 protein (Table 2). The PROVEAN test showed that the p. I935T mutation was deleterious (-2.75), and PolyPhen2 analysis predicted that the p. I935T mutation was most likely damaging, with scores of 0.63 and 0.516 in the HumDiv and HumVar models, respectively. ProtParam computed the instability index (II) of the CR2 protein to be 77.98, which classifies the protein as unstable, although the p. I935T substitution did not change the aliphatic or instability index (II). Mutation tasker software hazard prediction showed a score of 0.998, indicating that it is predicted to be disease-causing. The Mendelian Clinically Applicable Pathogenicity (M-CAP) Score and Sorting Intolerant from Tolerant (SIFT) prediction also showed a genetic damaging effect. Based on the above prediction software, the mutation c.2804 (exon 15) T>C in CR2 is likely pathogenic. We also searched the ClinVar database and found that a total of 74 variations were reported for CR2. However, most of them were likely benign or not clinically significant, with only a few classified as pathogenic (Table 3). Therefore, our analysis has added a new pathogenic variation to CR2 that is correlated with symptoms of familial SLE.

Systemic lupus erythematosus has a strong genetic predisposition in human patients and animal models.[18] The genetic basis of SLE has been established using genome-wide association studies (GWAS),[19] which have indicated that the genes responsible for regulating immune regulation pathways are mainly involved in SLE.[20,21] Recent studies have shown that the CR2 gene encodes complement receptor (CR)1 and CR2. CR2 is a 145 kDa glycoprotein that plays a crucial role in regulating normal immunity. For instance, it activates B cells by combining with B cell receptors to target the follicular dendritic cell antigen.[22] A previous report showed that CR2 was expressed in B cells[23] and that changes in CR2 expression had different effects on disease presentation in autoimmune animal models.[24] Moreover, CR2 knockout mice had a severe defect in their humoral response to T-dependent antigens.[25]

Both CR1 and CR2 have been reported to play a role in the development of SLE. Abnormal CR1 and CR2 function may be associated with the production of autoantibodies by altering the action of other SLE susceptibility genes.[26] In CR1/CR2 deficient mice, low levels of IgG3 rheumatoid factor (RF) and total serum IgG3 were observed, while significantly higher levels of IgA were observed in the glomeruli.[27]

Currently, SLE, like most common human illnesses, is recognized as a polygene disease with complex genetic susceptibility. A large number of gene polymorphisms have been associated with SLE susceptibility;[28,29] however, some researchers have hypothesized that SLE may be a mono-gene disease, as a complete deficiency in C1, C2, and C4 can cause SLE,[30] although other genes have also been implicated in single-gene lupus, which provides a valuable insight into the course of the very complex disease.[31] Familial SLE was first reported in 1961,[32] with more cases reported over time.[33] Wang et al.[34] analyzed the clinicopathological characteristics of familial SLE patients and found that compared to sporadic subjects, familial subjects had a higher prevalence of fever, rash, and arthritis, but lower platelet counts. However, another study reported no significant differences in the clinical and serological manifestations between familial and non-familial SLE.[35] Compared to the non-familial cohort, the familial SLE group had poorer SLEDAI scores at the beginning of diagnosis.[36] In our case study, we found a slight difference in serological manifestations and SLEDAI scores among the four SLE patients. In addition, only one patient developed lupus nephritis. Therefore, the link between CR2 and different phenotypes requires further study.

In conclusion, our study identified a novel CR2 gene mutation by next-generation sequencing in close family members with familial SLE. These findings provide evidence that CR2 contributes to the pathogenesis of SLE and this new disease-associated mutation site may provide new clues to the underlying molecular mechanisms of SLE.

The study protocol was approved by the Institute of Three Gorges Hospital Ethics Committee (no. 2017-002-01). The study was conducted in accordance with the principles of the Declaration of Helsinki.

A written informed consent was obtained from all patients and/or their family members.

We would like to thank the participants involved in the study.