Objectives: In this study, we aimed to examine the efficacy of micro ribonucleic acid (miRNA)-23a-5p in gouty arthritis and to investigate its possible mechanism.

Conclusion: Our findings demonstrate that miRNA-23a-5p is a biomarker for gouty arthritis and promotes inflammation in rats of gouty arthritis via MyD88/NF-κB pathway by targeting TLR2.

Gouty arthritis (GA) is a systemic chronic inflammatory autoimmune disease. Its major features are destruction and severe injury of cartilage and bone due to the imbalanced immune regulation in the synovium of joint.[1] Bilateral hand, wrist, knee, ankle and foot joint involvements are more commonly seen. With the development of RA, it may lead to joint damage and deformity, as well as loss of joint function.[1] Finally, it induces severe disability, severely affects the quality of life of patients, and causes tremendous economic burdens on the family and society.[2] Besides, it induces multiple systemic symptoms, such as fever, anemia, osteoporosis or myasthenia.[3] In addition, it can increase the morbidity of cardiovascular, lung and blood diseases, as well as the risk of incidence of some cancers.[3] In the local inflammation site of joint, disorders in the cytokines and chemotactic factor (CF) pathways would result in immunocyte infiltration.[2] This would lead to fibroblast-like synoviocyte (FLS) proliferation and persistent existence of inflammation. Rheumatoid arthritis (RA) is associated with the major pathological changes of synovitis and vasculitis.[4] Synovitis is the basis of intraarticular manifestation, while vasculitis is the basis of extraarticular manifestation. Vasculitis is one of the factors predicting the poor prognosis of GA.[3,4]

Micro ribonucleic acid (miRNA) is a kind of small molecule RNA constituted by 22-24 nucleotides.[5] It can recognize the specific sequence in the target gene 3' untranslated region (3'UTR) through the base complementation. Thereby, it can suppress target gene messenger RNA (mRNA) translation and (or) promote its degradation at post-transcription level. It is estimated that about one-third of genes in human genome are regulated by miRNA.[5] Meanwhile, numerous vital human processes are also regulated by miRNA, such as cell growth, development, inflammatory response, tumor formation and suppression. A study reveals that abnormal miRNA expression is closely correlated with GA, cardiovascular disease, renal disease, inflammation, as well as tumor genesis, development and prognosis.[6] The expression of miR-17-5p, miR-30c-5p, miR-142-3p, miR-18a-5p and miR-223-3p is significantly upregulated in patients with hyperuricemia and gout.[7] Liu et al.[8] showed that that serum miR-23a-5p was increased in sepsisinduced acute respiratory distress syndrome in early stage. Yang et al.[9] reported that miR-23a-5p expression was significantly increased in both plasma and macrophages from atherosclerosis mice.

Toll-like receptors (TLRs) can recognize their respective ligands. Subsequently, they can mediate various immune responses through intracellular signal transduction.[10] Among them, the myeloid differential protein-88 (MyD88) plays an important role.[11] This pathway is called the MyD88-dependent signal transduction pathway. The MyD88 is an important adapter protein, which can recruit interleukin-1 receptor-associated kinase (I-RAK). The I-RAK interacts with tumor necrosis factor receptor associated factors-6 (TRAF6), after it is activated.[11] Thus, it can induce two distinct signal transduction pathways. One is to induce the activation of activating transcription factor AP-1 through activating mitogen-activated protein kinases (MAPK).[12] The other one is to activate nuclear factor-kappa B (NF-κB), so that it can be released from the I-κB/NF-κB complex and migrate into the nucleus. Finally, it leads to the transcription of related genes.[13] A study has confirmed that TLR2 can activate the NF-κB pathway and induce arthritis in RA patients.[13] Gu et al.[14] showed that miRNA-23a-5p modulates inflammation and mycobacterial survival during mycobacterium tuberculosis infection through TLR2/MyD88/NF-κB pathway. In the present study, we, therefore, aimed to investigate whether miRNA-23a-5p regulates inflammation and to examine the neuroprotective efficacy of miRNA-23a-5p in GA and its possible mechanism.

A total of 20 adult, male Sprague-Dawley rats (180±20 g) were supplied from the Beijing Vital River Laboratory Animal Technology Co., Ltd (Beijing, China). All rats were housed five per cage in a specific pathogen-free room with controlled ambient temperature (22±2°C) and relative humidity (55±5%) with a 12-h light/dark cycle and freely available food and water. The rats were divided into two groups as follows: sham and arthritis group. In arthritis group, the rats were established by intraarticular injection of 0.2 mL monosodium urate crystal (20 mg/mL) inside knee joint cavity, and rats were sacrificed using decollation on Day 2 under 35 mg/kg pentobarbital sodium (IP).

The tissue samples or cell samples were immediately immersed in RNAlater, (Qiagen, Valencia, CA, USA) and stored at -20°C until RNA extraction. The qRT-PCR analysis was carried with Power PCR SYBR Green Master Mix (Applied Biosystems, Carlsbad, CA, USA) using the ABI PRISM 7500 FAST RealTIME PCR System (Applied Biosystems, Carlsbad, CA, USA). Thermal cycling conditions included an initial step at 95°C for 10 min and 40 cycles at 95°C for 30 sec, at 60°C for 15 sec, at 72°C for 30 sec. The primer of miRNA-23a-5p: 5´-ATCACATTGCCAGGGATTTCC-3´ and 5´-CAGCCTTGCGACCATACT-3´; U6 forward, 5´-GCTTCGGCAGCACATATACTAAAAT-3C and reverse, 5´-CGCTTCACGAATTTGCGTGTCAT-3´. THE U6 was used as reference genes. The relative expression was calculated using the ΔΔCT method.15 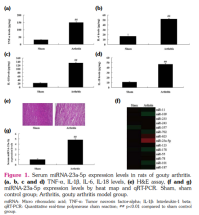 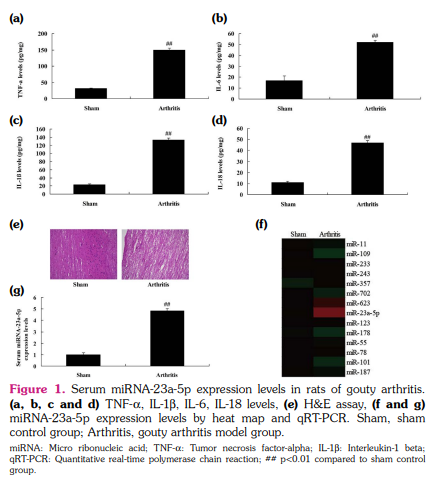 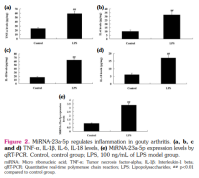 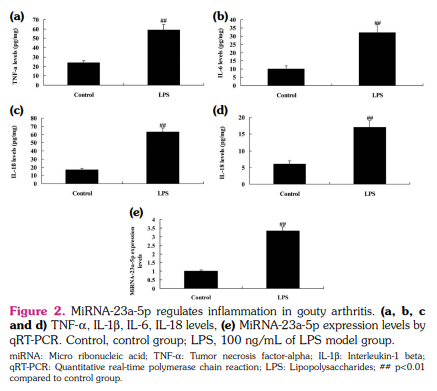 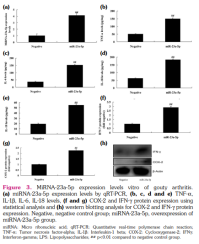 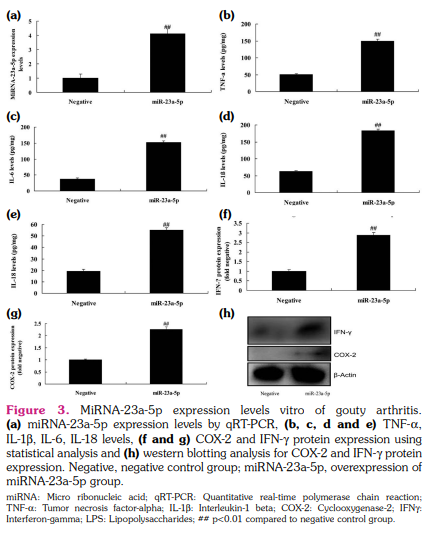 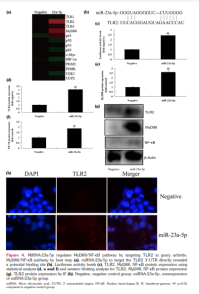 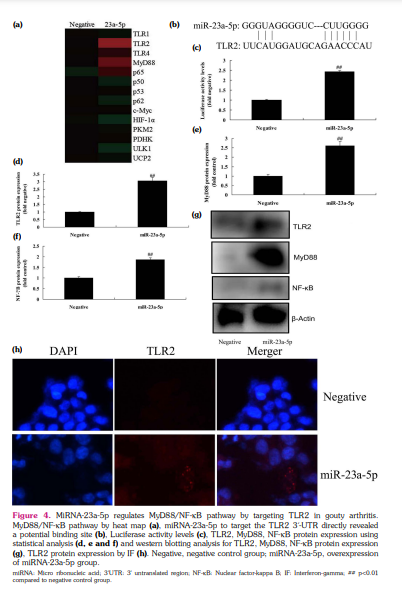 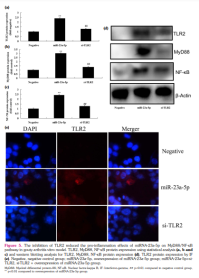 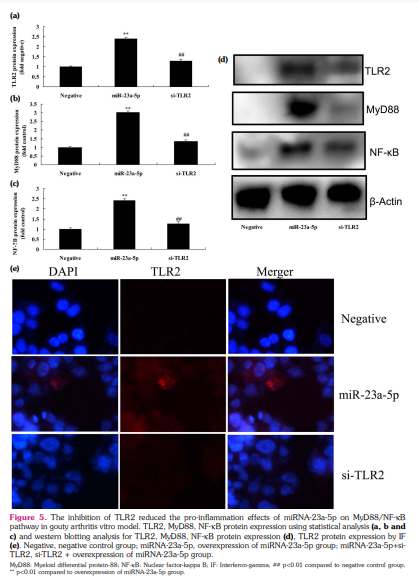 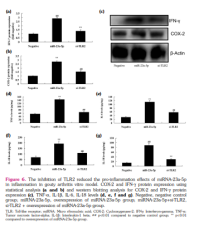 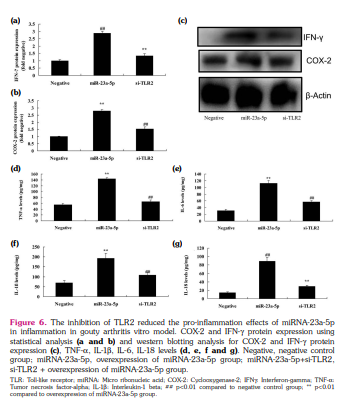 Gouty arthritis is a chronic progressive osteoarticular disease characterized by articular cartilage degeneration and periarticular hyperostosis.[2] Its incidence is increased with the increase in age. It mainly affects the articular cartilage, bone and synovial tissue, leading to joint pain, deformity and dysfunction.[18] It is the most common cause of pain in the middle-aged and elderly. Related GA research has attained great progress.[18] However, the molecular mechanisms of the pathogenesis and pathological process of OA remain unclear.[19] Besides, no effective treatment is available in clinic.[20] In recent years, with the intensive study on miRNA, its role in GA pathogenesis has become the focus.[21] Research indicates that changes in multiple miRNAs can be detected in GA patients. Moreover, some miRNAs would affect the apoptosis and gene expression of cartilage cell.[21] Estevez-Garcia et al.[22] showed that the miR-146a, miR-155, and miR-223 regulated inflammatory pathways in GA. Therefore, further studying its target and regulatory factor may play a key role in controlling arthritis destruction and stimulating repair. Thus, it may be a novel treatment. Our study demonstrated that serum miRNA-23a-5p expression levels were increased in rats of GA. Liu et al.[8] indicated that miR-23a-5p was increased in sepsis-induced acute respiratory distress syndrome in early stage. This study only used primary cell and an insufficient for present study. In further study, we would analyze cell line, and more experiment models to verify our results.

The TLRs-mediated pathway is related to the acute inflammation induced by the MyD88-dependent IL-1 receptor pathway.[10] The TLRs can recognize and bind with the corresponding ligands. Afterwards, they can transfer the signals through the MyD88 and TIR domain adapter protein (TRIF)-dependent pathway (non-MyD88-dependent pathway).[23] Moreover, they can activate NF-κB and AP-1, and initiate the related target gene transcription.[23] Besides, they can rapidly induce the transcription of pro-inflammatory factors (IL-1, IL-6, IL-8, IL-12, TNF-α and IFN), CF, adhesion molecule, COX-2 and inducible nitric oxide synthetase.[23] Typically, the products of these enzymes and cytokines play key roles in the inflammatory response.[23] In the present study, we demonstrated that overexpression of miRNA-23a-5p induced TLR2, MyD88 and NF-κB protein expression in vitro model. Gu et al.[14] showed that miRNA-23a-5p modulated mycobacterial survival during mycobacterium tuberculosis infection through TLR2/MyD88/NF-κB pathway. We only analyzed miR-23a-5p binding sites in their 3-UTR of TLR2 and it was insufficient for this study. We would analyze a pool of TLRs (e.g., TLR1, TLR3, TLR4, TLR5) in further studies.

Numerous domestic and foreign studies indicate that TLR2, TLR4 and MyD88 are closely correlated with inflammatory response.[24] The TLRs/MyD88 signaling pathway is involved in the inflammatory response process of GA.[24] Therefore, the TLRs/MyD88 signal pathway exerts multiple regulatory functions, and plays a vital role in the inflammatory response of GA.[25] The types and activation patterns of ligands recognized by TLR2 and TLR4 may be different; however, its precise mechanism remains to be further studied.[25] The most recent study has indicated that TLR4, NF-κB p65 and IL-1β levels are higher in acute GA patients than in non-acute arthritis patients.[26] Similarly, the levels of these indexes in non-acute GA patients are partly improved compared to those in healthy control group.[27] This finding further reveals that the TLR4-NF-κB p65-IL-1β signal pathway plays a key role in the course of acute GA in primary gouty patients.[27] The results of this study demonstrated that the inhibition of TLR2 reduced the pro-inflammation effects of miRNA-23a-5p in inflammation in GA in vitro model. Rathore et al.[28] reported that NF-κB member p65 controled glutamine metabolism through miR-23a.

In conclusion, this study provides evidence of a mechanism that overexpression of miRNA-23a-5p promotes inflammation and induces MyD88/NF-κB pathway by targeting the TLR2 in vitro model. Alternatively, these data provide evidence that miRNA-23a-5p activation is a novel target for the treatment of GA.

Animal studies were approved by the Committee of Ethics of Animal Experimentation of Hebei General Hospital (date: 23.11.2016, no: 2016-KLS38).

This study was supported by Hebei province Science and Technology Plan Projects (162777186).