A 60-year-old female patient presented with subacute ataxic-hemiparesis progressing over two months. In the past, she was diagnosed with end-stage renal disease, with anti PR3 antibodies, and was receiving maintenance hemodialysis for 2.5 years. One year earlier, she presented with a mass in the right breast; histopathology had demonstrated non-caseating granulomas with no evidence of mycobacterial or fungal infection, and had responded to oral corticosteroids. On admission, magnetic resonance imaging (MRI) (Figure 1) showed multiple supra- and infratentorial brain lesions with perilesional edema (Figure 1a). Most lesions revealed a ‘target appearance’ on T2-weighted images with peripheral iso/hypointense rims surrounding the hyperintense central area. These were diffusion restricted centrally, and blooming in lesion wall on susceptibility images, all suggesting intracranial granulomas. Toxoplasma and tuberculosis serology (IGRA) were negative, but anti PR3-ANCA levels (EIA) were raised. The patient refused an invasive biopsy. The granulomas were considered a part of the granulomatosis with polyangiitis (GPA) and an oral steroid trial showed a marked improvement in the ataxia and weakness. Rituximab was administered. Control MRI documented reduction in size and perilesional edema (Figure 1b). Intracranial manifestations of GPA, apart from those attributed to vasculitis, are granulomas that are usually contiguous with extracranial sites such as sinuses or the mastoid.[1] This patient had unusual remote granulomatous disease in two distinct organs: the breast and brain. 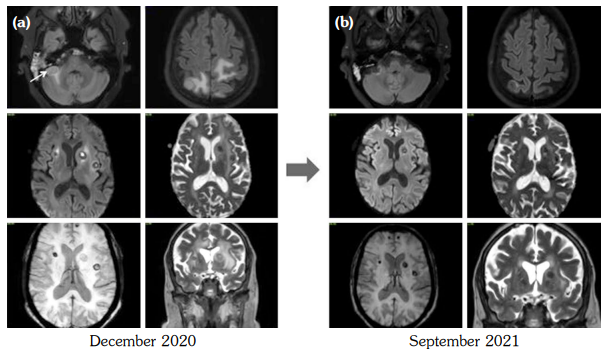 A written informed consent was obtained from the patient.