Patients and methods: Between January 2016 and December 2017, a total of 200 severe acne patients (22 males, 178 females; mean age: 21.8±0.4 years; range, 15 to 53 years) who were on isotretinoin treatment were retrospectively analyzed. Data including age, sex, body mass index (BMI), duration of disease, diagnosis, and comorbidities were recorded. Back pain severity was evaluated with the Visual Analog Scale (VAS).

Results: The treatment period was mean 8.5±0.1 (range, 6 to 12) months. The dose of isotretinoin was mean 0.6±0.1 (range, 0.5 and 1) mg/kg. Musculoskeletal side effects were seen in 99 (49.5%) patients. Back pain was reported during the treatment period in 78 (78.7%) patients. The diagnosis was mechanical back pain in 31 (39.7%) and inflammatory back pain in 47 (60.3%) patients. The moderate-severe back pain group received higher cumulative isotretinoin doses than the mild back pain group (p=0.003). The BMI values did not show a significant difference between the patients with and without back pain (p=0.55). There was no significant correlation between the BMI and VAS scores (p=0.06). The VAS scores were found to be correlated with age (p=0.04). Sacroiliitis was diagnosed in four (4%) patients. One (1%) patient was diagnosed with enthesitis. Creatine kinase elevation was reported in 18 (18.1%) patients, while three (3%) patients described myalgia of mild severity.

Conclusion: Low back pain is one of the most common musculoskeletal side effects of isotretinoin treatment that usually resolves with dose reduction. The cumulative dose of isotretinoin does not seem to play a role in the development of back pain, but can determine pain severity. Pain severity is directly correlated with the increasing age. Evaluation of the patients for musculoskeletal side effects during isotretinoin use is important in clinical practice, as it is a common occurrence.

Acne vulgaris is a chronic inflammatory skin disease, particularly affecting the young population. Topical and systemic treatment regimens are used to treat the condition. Isotretinoin is a synthetic vitamin A derivative that is effective on four of the factors that play a role in acne pathogenesis: sebum hypersecretion, follicular hyperkeratinization, Propionibacterium acnes proliferation, and inflammation.[1] It affects acne pathogenesis by binding to cellular retinol binding protein or retinoic acid nuclear receptors.[2]

Isotretinoin use is associated with mucocutaneous, ocular, neurological, musculoskeletal, and hepatic side effects. Musculoskeletal side effects are common during systemic isotretinoin treatment and include enthesopathy, arthritis, sacroiliitis, costochondritis, osteoporosis, hyperostosis, extraspinal calcifications, and premature epiphyseal closure in children.[3-10]

Isotretinoin has detergent-like properties and can affect immunomodulation by causing alterations in the cytokine levels.[11,12] The activation of matrix metalloproteinases (MMPs) which is stimulated by proinflammatory cytokines is known to play a role in the pathogenesis of osteoarthritis and rheumatoid arthritis.[13] Retinol and retinoic acid have been shown to induce MMP-2 activity.[14] The same mechanism may also play a role in the development of side effects such as sacroiliitis and tendinitis during isotretinoin treatment. Catabolic events such as the upregulation of ubiquitin ligases including atrogin-1 and muscle-specific ring finger protein-1 have been also noted in the etiology of muscle pain related to isotretinoin.[15,16]

The results of the limited number of studies investigating the frequency of isotretinoin-related musculoskeletal effects in the literature have been variable.[3,4,17-19] Myalgia, arthralgia, and low back pain have been reported as the most common musculoskeletal side effects.[3,17,19] Sacroiliitis has been reported in 8.2% and 11.7% of the patients, respectively, in two different studies.[3,19] Tendinopathy is another side effect, but it is less common. Tendinopathy has been reported in 4.3% of the patients in the study of Karaosmanoğlu and Mülkoğlu.[19]

This single center, cross-sectional, retrospective study was conducted at Kırşehir Training and Research Hospital, Department of Dermatology between January 1st, 2016 and December 31st, 2017. A total of 200 severe acne patients (22 males, 178 females; mean age: 21.8±0.4 years; range, 15 to 53 years) who were initiated on isotretinoin treatment were included (Table 1). Patients with a history of neuromuscular, rheumatoid, or systemic inflammatory disease were excluded. The patients on isotretinoin were referred to the Physical Medicine and Rehabilitation specialist during their monthly follow-up and the development of any musculoskeletal side effects was evaluated. The data of these patients were retrospectively analyzed together with the radiology findings.

Data including age, sex, height, weight, BMI, duration of disease, diagnosis, and comorbidities of the patients were recorded. The BMI (kg/m2) was calculated. Pain was evaluated with the Visual Analog Scale (VAS) as 0 to 10. The VAS scores of 1-4 were classified as mild pain, 5-6 as moderate pain, and 7-10 as severe pain.[20]

Inflammatory low back pain was evaluated using the Assessment of Spondyloarthritis international Society (ASAS) criteria. The ASAS criteria consist of disease onset under the age of 40 years, insidious onset, relief with exercise, no relief with rest, and nocturnal pain improving with rising.[21]

Statistical analysis was performed using the IBM SPSS version 21.0 software (IBM Corp., Armonk, NY, USA). Descriptive data were expressed in mean ± standard deviation (SD), median (min-max) or number and frequency, where applicable. The statistical difference between the groups was analyzed using the Student t-test for mean values. The correlation between the variables was evaluated using the Spearman correlation test. A p value of <0.05 was considered statistically significant.

Dose reduction was used in patients with moderate and severe back pain, constituting 37.2% of the patients describing the complaint. The vast majority of these patients responded to dose reduction, while eight (10.2%) patients needed to use non-steroidal anti-inflammatory drugs for pain relief. Sacroiliitis was present in four (4%) patients, including three females and one male. There was no statistically significant difference between the sexes for sacroiliitis development (p=0.25). Bilateral sacroiliitis was detected in one patient (Figure 1). Sacroiliitis regressed 1.5 to 2.5 months after isotretinoin treatment cessation in all patients. The patients diagnosed with sacroiliitis were followed for six months. Three (3%) patients described myalgia, which was of mild severity and did not require additional treatment. Among these patients, two female patients also described low back pain. Creatine kinase (CK) elevation was observed in 18 (18.1%) patients, including 13 males and two females, one to three months after the beginning of treatment (p=0.1). The elevated CK values ranged between 233 and 940 IU and returned to normal levels after dose reduction. One (1%) female patients who was on low-dose isotretinoin treatment (0.5 mg/kg) was diagnosed with enthesitis at three months of treatment (Figure 2). 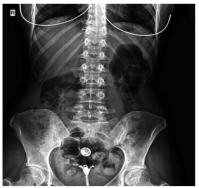 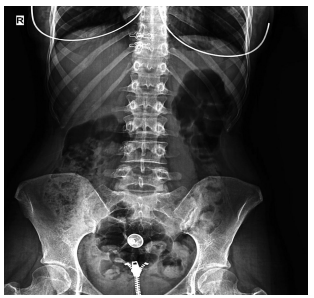 Figure 2. Enthesitis in right side of lateral foot X-ray.
× 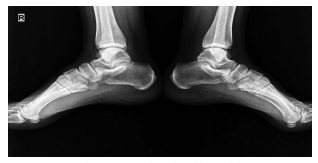 Isotretinoin use is associated with neuromuscular side effects, the most common of which are musculoskeletal pains and arthralgia. These side effects are seen in 20% of patients. They are usually mild and improve with discontinuation of treatment.[3,7]

Obesity has been associated with an increased risk of low back pain in some studies.[24,25] Increased BMI values were not an additional risk factor for the development or increased pain severity in the current study. However, since patients with high BMI values (>25 kg/m2) constituted a small proportion of our cohort, further large-scale studies including patients with and without obesity and using isotretinoin are warranted.

In our study, the correlation between the VAS scores and age suggests that the effect of isotretinoin on the musculoskeletal system increases with age. Musculoskeletal degeneration related to alterations in hormones, cytokines, growth factors, and altered connective tissue biology occurs during the aging process.[26] Therefore, older patients may be more likely to develop more severe musculoskeletal side effects related to isotretinoin.

Muscular side effects including myalgia and muscle stiffness have been reported in 15 to 50% of patients treated with isotretinoin.[18,31,32] Myalgia associated with isotretinoin use is usually mild.[3] Elevation of CK levels, which indicates serious muscular cell damage, has been reported in 5.6 to 41% of the patients with isotretinoin use.[33] The elevations in CK have been mostly reported to be detected incidentally on routine blood tests of the patients, with no concurrent clinical symptoms.[31-35] In a study by Kaymak[18] including 89 patients on isotretinoin treatment, five patients had elevated CK levels and only one patient had myalgia. The main features of CK elevation include darker skin types, male sex, and a history of regular athletic activity.[18] Male patients constituted the majority in our study, and all had a history of vigorous physical activity. Elevated CK levels (approaching or exceeding 1,000 to 2,500 IU) during isotretinoin treatment also raise a concern for rhabdomyolysis, which is characterized by generalized muscle damage, acute kidney injury, and myoglobinuria.[33] Severe acute myopathy has also been reported in two patients on isotretinoin treatment in the literature.[36] in the present study, we observed no rhabdomyolysis, renal failure, or myopathy in any of the patients.

The main limitations of this study include its retrospective nature and the lack of HLA-B27 assessment.

The study protocol was approved by the Ahi Evran University Faculty of Medicine Ethics Committee (Date 31.10.2017, no: 2017- 16/191). The study was conducted in accordance with the principles of the Declaration of Helsinki.

A written informed consent was obtained from each patient.
Data Sharing Statement: The data that support the findings of this study are available from the corresponding author upon reasonable request.