Patients and methods: Between January 2008 and December 2018, a total of 28 patients (10 males, 18 females; median age: 12.5 years; range, 4.5 to 21 years) who were diagnosed with chronic non-bacterial osteomyelitis in three pediatric rheumatology centers were retrospectively analyzed. The demographic, clinical, and laboratory findings of the patients were recorded.

Results: The median age at the time of diagnosis was 10.2 years. The median time from symptom onset to diagnosis was 6.5 months. The median follow-up was 18.5 months. The most frequent symptom at onset was arthralgia (75.0%). The most frequently involved bone was the femur (67.9%). Eight (63.6%) of 12 patients had at least one Mediterranean fever gene (MEFV) mutation, indicating a significantly higher prevalence than the Turkish population (14.8%). Five of these patients fulfilled the diagnostic criteria for familial Mediterranean fever (FMF). All patients received non-steroidal anti-inflammatory drugs. Other drugs were methotrexate (46.4%), sulfasalazine (39%), corticosteroids (25%), anti-tumor necrosis factor (anti-TNF) agents (32%), pamidronate (25%), and colchicine (21.4%). Six of eight patients with MEFV mutations were administered with colchicine, and all of them responded to treatment.

Conclusion: Clinical evolution and imaging investigations should be carefully performed to prevent any delay in the diagnosis of patients with chronic non-bacterial osteomyelitis. Based on our study results, FMF coexistence is worth investigating in patients with chronic non-bacterial osteomyelitis, particularly in the Turkish population.

Chronic non-bacterial osteomyelitis (CNO) is a rare inflammatory bone disease. It was first reported by Giedion et al.[1] in 1972 as symmetric multifocal bone lesions. It is an orphan disease and, therefore, little is known about its diagnosis, treatment, and follow-up. The bone inflammation is defined as CNO, regardless of the number of lesions, and chronic recurrent multifocal osteomyelitis (CRMO) is thought to be a more severe form of CNO. Nevertheless, these two terms are mostly used interchangeably.[2]

The cause and physiopathology of the disease are still uncertain. Although the underlying pathogenic mechanism is unknown in CNO patients, the production of immunomodulatory cytokines (interleukin [IL]-10 and IL-19) decreases, and inflammation and proinflammatory cytokines (IL-1α, IL-6, and tumor necrosis factor [TNF]-alpha [TNF-β]) increase.[3] A few genes that can cause sterile osteomyelitis (LPIN2, IL1RN, FBLIM1, PSTPIP2) have been identified in human and animal models. However, mutations in these genes have been detected in a small CNO group.[4]

Jansson et al.[5] has proposed diagnostic criteria including clinical, laboratory, and radiological criteria; however, there is still no confirmed standard diagnostic method. Although non-steroidal anti-inflammatory drugs (NSAIDs), corticosteroids, disease-modifying anti-rheumatic drugs (DMARDs), and biological drugs are used in the treatment, there are no randomized-controlled trials for the treatment of CNO. Recently, Eurofever records have been published about demographic data and clinical, instrumental, and therapeutic features of 486 CNO cases.[2] Accordingly, the disease can present with a range of clinical manifestations in a large patient group.

In the present study, we aimed to evaluate the clinical and laboratory characteristics of CNO patients from three pediatric rheumatology centers located in Turkey and to present the diagnostic methods, treatment approaches, and the place of familial Mediterranean fever (FMF) coexistence in Turkey in these specific patient populations.

This multicenter, retrospective study included a total of 28 patients (10 males, 18 females; median age: 12.5 years; range, 4.5 to 21 years) who were diagnosed with CNO between January 2008 and December 2018 in three pediatric rheumatology centers across the country. Clinical features, laboratory data, imaging, and histopathological examination results of the patients were retrieved from medical charts and electronic files. Treatments were documented. First, infection and malignancy etiologies were ruled out in patients who had compatible lesions with CNO in at least one imaging method and/or biopsy-confirmed osteomyelitis. The diagnosis of all patients was confirmed according to the Jansson criteria (Table 1).[5] A written informed consent was obtained from each parent and/or his/her legal guardian. The study protocol was approved by the Dokuz Eylül University Non-Inventional Researchs Ethics Committee (approval date/no 2019/10-17). The study was conducted in accordance with the principles of the Declaration of Helsinki.

Musculoskeletal findings were categorized as arthralgia, arthritis, bone pain, swelling, and limping. Magnetic resonance imaging (MRI), radionuclide bone scintigraphy, and histopathological examination findings were evaluated. Lesions were recorded according to the bone and joint localizations. Treatment regimens of all patients were also recorded. Outcomes were unable to be evaluated due to non-standardized treatment modalities among the centers.

Statistical analysis was performed using the IBM SPSS for Windows version 20.0 software (IBM Corp., Armonk, NY, USA). Descriptive data were expressed in median and interquartile range (IQR) for continuous variables and in number and percentage for categorical variables. The ShapiroWilk test was used to analyze the distribution of the data. 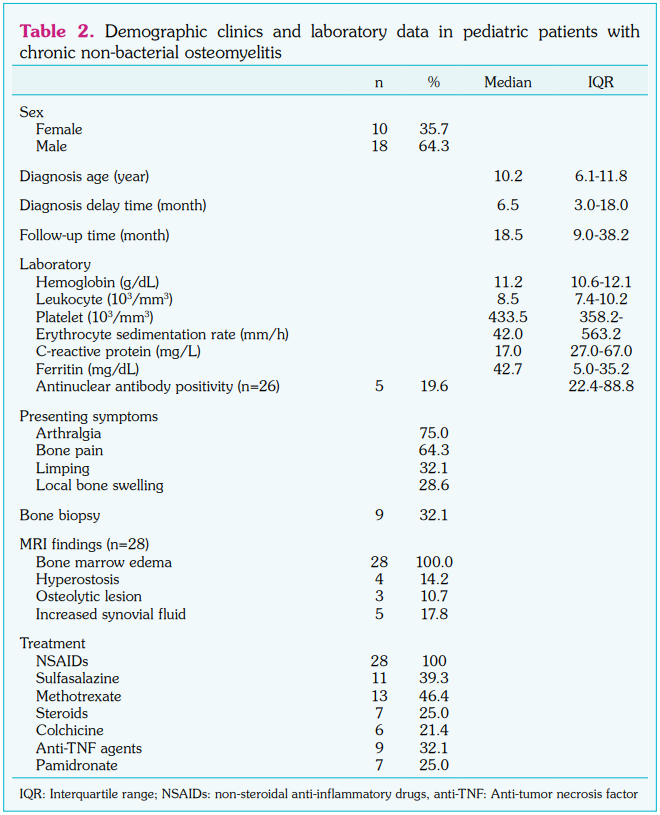 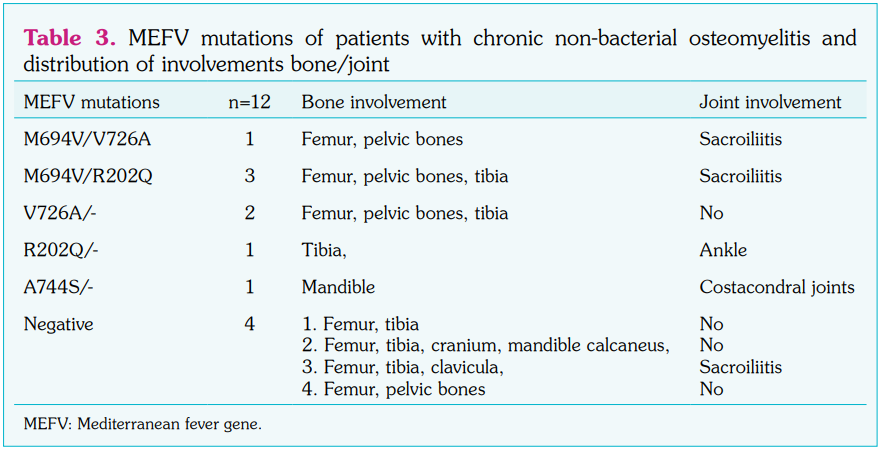 All patients had X-ray and MRI imaging. Whole-body MRI was not available. On MRI, bone marrow edema was determined in all 28 patients, while other findings were related to hyperostosis (14.2%), osteolytic lesions (10.7%), and increased synovial fluid in adjacent joints (17.8%). There was an increased osteoblastic activity in all 14 patients who had radionuclide bone scintigraphy.

Nine patients had a bone biopsy. Histopathological examination of six patients revealed a cell infiltration which was a mixture of lymphocytes and neutrophil cells. Neutrophil infiltration was seen in two patients, and one patient had only lymphocyte infiltration. Microbial analyses were negative in all patients.

Two cases had keratosis pilaris and xeroderma pigmentosum. However, there was no CNO associated with skin lesions, such as acne, palmoplantar pustulosis, or psoriasis. Two patients had inflammatory bowel disease (colitis ulcerosa, Crohn's disease). Eight patients had MEFV mutations, and five of them were diagnosed as FMF. Three patients met the International League Against Rheumatism- Enthesitis related arthritis/Juvenile spondyloarthropathy (ILAR ERA/JSpA) criteria.[7]

All the patients used NSAIDs. The DMARD treatment included methotrexate (46.4%), sulfasalazine (39.3%), corticosteroids (25%), and colchicine for the ones with MEFV mutation (21.4%). Anti-TNF drugs were administered to nine patients unresponsive to DMARDs (32.1%), while four of them were additionally administered with pamidronate (25%) to control the disease. Six patients with MEFV mutations received sulfasalazine (n=6), corticosteroids (n=3), anti-TNF (n=3), pamidronate (n=2), and methotrexate (n=1), in addition to colchicine. The patients who poorly responded to previous treatments achieved improvement after the initiation of colchicine.

In the present study, we evaluated the clinical and laboratory features, radiological findings, and treatments of 28 CNO Turkish patients followed in three different pediatric rheumatology centers. Our study results showed that FMF coexistence is worth investigating in patients with chronic non-bacterial osteomyelitis, particularly in the Turkish population.

Sözeri et al.[14] reported 17 patients with CNO in their study, which included the second-largest cohort from Turkey after the present study. Their retrospective study included the demographic data and clinical features of 17 children diagnosed with CRMO in two pediatric rheumatology centers. Their report indicated that CRMO might be overlooked and misdiagnosed at first sight in our country, suggesting a closer follow-up of these patients to avoid potential complications and sequelae.

Batu et al.[15] reported that four of five CNO patients had sacroiliitis. They suggested that there was a relationship between CNO and juvenile spondyloarthritis (JSpA). Skrabl-Baumgartner et al.[16] reported that one-third of pediatric CNO patients fulfilled the International League of Associations of Rheumatology (ILAR) enthesitisrelated arthritis (ERA)/JSpA criteria. Vittecoq et al.17 also showed that most of the CNO patients evolved into JSpA over a 10-year period. This similarity raised the question of whether CNO was an initial form of JSpA. In our study, HLA-B27 was positive in three of 12 patients with sacroiliac involvement and these three patients met the ILAR ERA/JspA criteria.

In the study of Silier et al.,[11] preliminary diagnoses were malignancy (36%), bacterial osteomyelitis (30%), arthritis (15%), fracture (15%), and growth pain (4%). In the present study, the lesions were mostly multifocal and localized in metaphysis, which is similar to the study by Silier et al.[11] Frequent preliminary diagnoses of patients were juvenile idiopathic arthritis, bacterial osteomyelitis, and septic arthritis in the present study. The most involved bones were the femur, tibia, and pelvis.

In another study, Girschick et al.[13] reported that laboratory tests were non-specific for diagnosis, while a mild increase in acute phase reactants accompanied an exacerbation or might be related to multiple lesions. The present study had similar results with the Eurofever study in terms of acute phase response.[2]

Magnetic resonance imaging is the preferred imaging modality to characterize lesions at onset and to monitor treatment response. It has an important value for diagnosis, as well as medical history and physical examination. Whole-body MRI is very helpful in applicable centers.[18] The radionuclide bone scintigraphy detected increases in the osteoblastic activity. In the present study, primary MRI findings revealed bone marrow edema, effusion in joints, hyperostosis, and osteolytic lesions. Imaging findings of CNO patients were compatible with the Eurofever registry.[2] In the light of the current literature and our study results, imaging modalities can show the non-specific inflammation in the tissue; however, they cannot indicate any pathognomonic finding.

The histopathological evaluation may be required in some cases for the differential diagnosis. In particular, it is preferred in cases in whom malignancy must be ruled out.[19] In the present study, a histopathological examination was performed in nine (32.1%) patients. There was a sterile non-specific composition of lymphocytes and neutrophils in the specimens.

The relevant literature contains case series of CNO patients having MEFV mutations who received additional benefits from colchicine treatment. All of these patients had exon 10 mutations.[20-23] Colchicine treatment was started in a girl with osteomyelitis and febrile attacks who had MEFV mutations (E148Q/ P369S/R408Q).[20] The lower extremity osseous lesions improved after colchicine for one year; however, she had another episode of osteomyelitis, when she stopped taking colchicine. Two CNO cases from Turkey were reported with compound heterozygote MEFV (exon 10) mutations (M694V/E148Q and M694V/M680I) and received benefits from colchicine.[21] Moussa et al.[22] described seven cases with CNO, with one of them having FMF with heterozygote M694V mutation. The patient had vertebral, pelvic, and lower extremities involvement. Naproxen, methotrexate, and pamidronate were administered respectively, along with colchicine. A recent study reported a CNO patient with FMF (V726A heterozygote), who responded well to anakinra.[23] She had the involvement of femoral condyles and proximal tibia. There are no studies investigating the relationship between CNO and FMF, except for a few number of case reports and case series. The Eurofever registry, the largest CNO cohort, did not show a possible relationship between CNO and FMF.[2] It may be speculated that MEFV mutations, mainly exon 10, may have an inflammatory stimulation of bones with CNO, and additional colchicine treatment is helpful in the disease control. Sözeri et al.[14] detected MEFV gene mutations in four patients in whom severity of clinical features reduced with colchicine therapy. Soylemezoglu et al.[24] also found a much higher FMF prevalence (14.8%) than expected in the Turkish population (14.8%). In the present study, at least one MEFV mutation was detected in eight of 12 (63.6%) patients who were assessed for FMF coexistence. Seven of these patients (88%) had an exon 10 mutation, and five met the diagnostic criteria for FMF and were administered with colchicine. The MEFV positive group mainly had involvement of pelvic bones and femur. Furthermore, 50% with M694V allele had sacroiliitis. This can be evaluated as the most interesting and striking result of the present study. Thus, searching MEFV mutations can be recommended in patients living in countries where FMF is common, particularly when the lesions are resistant to common treatment modalities.

The retrospective design with a relatively small sample size can be deemed as limitations of the present study. In addition, the clinical outcomes of patients were unable to be assessed, due to the lack of standardized treatment modalities among the study centers. Nonetheless, being the largest cohort of CNO patients from Turkey is the main strength of this study.

In conclusion, CNO is a chronic inflammatory disease of bone that may have a progressive or relapsing course. The disease still has many aspects to be discovered. In addition, FMF is the main accompanying disease to CNO in the Mediterranean region, which has a role in clinical manifestation and response to treatment. Considering the results of this study, it can be speculated that FMF coexistence is always worth investigating in these specific patient populations, particularly in countries such as Turkey which have a high FMF patient prevalence.