Antiphospholipid syndrome (APS) is an acquired cause of thrombophilia with persistent elevation of antiphospholipid antibodies which include anticardiolipin antibody and lupus anticoagulant.[1] Vascular thrombosis with obstetric complications is the key feature of APS.[2] Post-thrombotic syndrome (PTS) presenting as non-healing recurrent ulcers are the most frequent chronic complications of deep venous thrombosis (DVT), accounting for 20 to 40% of patients with DVT.[3]

Herein, we report a rare presentation of primary APS in a young male as PTS. A 19-year-old male presented with bilateral, non- healing, painless recurrent leg ulcers (Figure 1) and visible abdominal veins (Figure 2) for the last six months. According to the patient, he had recurrent painful swelling of lower limbs from 12 years of age which gradually resolved on some oral medications each time. He was recently diagnosed as hypertensive and was non-compliant to medications. He was a non- smoker. There was no history of prolonged immobilization, recent trauma, or surgery. Family history was unremarkable. On physical examination, all peripheral pulses were palpable. He had deep and dry ulcers on legs with irregular sloping borders along with surrounding lipodermatosclerotic changes bilaterally and prominent distended abdominal veins in flank region bilaterally with decreased flow. A written informed consent was obtained from the patient. 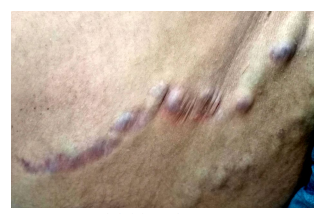 Investigations confirmed the diagnosis of primary APS and excluded other causes of hypercoagulability. Treatment with warfarin 5 mg, subcutaneous enoxaparin 60 mg as the bridging therapy, amlodipine/valsartan 10/160 mg P.O. and atorvastatin 20 mg P.O., all once daily, was initiated. He was advised compression dressing with zinc oxide for venous ulcers.

The patient is still under follow-up on a monthly basis in the outpatient setting. His ulcers have improved significantly, and he is on anticoagulants.

In conclusion, primary APS is a rare disease in adolescents and non-healing recurrent venous ulcers in relation to APS are reported rarely, particularly at a young age in male sex. This case is presented due to its unusual presentation to consider possibility of both acquired and hereditary thrombophilic disorders in any patient presenting with chronic venous insufficiency.