A 58-year-old male patient presented with widespread psoriatic plaques with a Psoriasis Area and Severity Index of 22.6. Due to the lack of benefit from multiple topical agents and methotrexate, he was a candidate for biological therapy. Routine investigations including initial chest radiography and laboratory tests were normal prior to the initiation of therapy. He had no history of lung disease and no contact with tuberculosis patients. Isoniazid prophylaxis was initiated one month prior to adalimumab therapy owing to QuantiFERON®-TB Gold test (Cellestis Limited, Carnegie, Victoria, Australia) positivity. At the end of one month of isoniazid prophylaxis therapy, adalimumab was initiated and the patient received adalimumab for four years without any side effects. Detailed anamnesis revealed that the patient was working as a farmer and plowing fields, and he stated that during the summer, the weather was dry, windy, and dusty in the region he lived.

At the end of four years, chest radiography demonstrated diffuse millimetric nodular opacities mainly in upper and middle zones of bilateral lungs (Figure 1a). Computed tomography (CT) of thorax revealed widespread millimetric nodular opacities disseminated in a miliary pattern on bilateral lungs in the absence of hilar or mediastinal lymphadenopathy. The nodules were 1 to 2 mm in diameter and some of them were cavitary (Figure 1b). The patient was free of any symptom and routine laboratory analysis was normal. Pulmonary function tests were within normal limits. A written informed consent was obtained from the patient.

Figure 1. (a) Posteroanterior chest radiography demonstrating diffuse millimetric nodular opacities mainly in upper and middle zones of bilateral lungs. (b) Computed tomography of thorax through main carina demonstrating widespread millimetric nodular opacities disseminated in a miliary pattern. Nodules are 1 to 2 mm in diameter and some are cavitary.
× 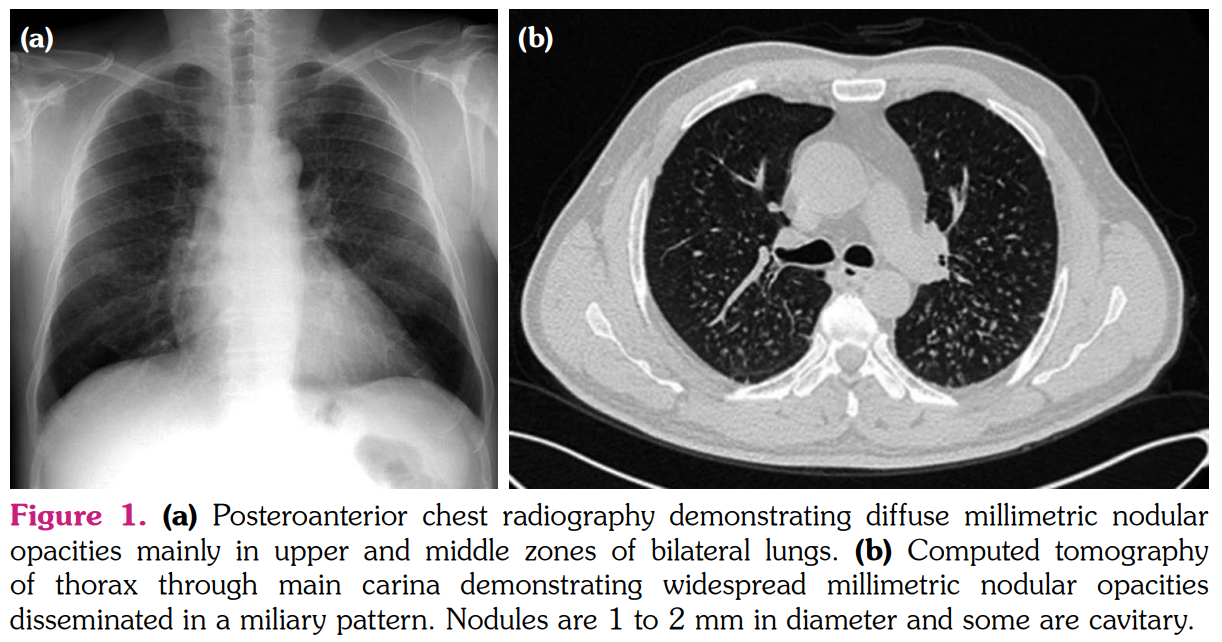 The smears of bronchoalveolar lavage (BAL) were negative for any bacteria, fungi, or acid- fast bacilli. Cytological examination revealed numerous macrophages, few lymphocytes, and few neutrophils. BAL cultures were also negative. Serological tests for the infection of viruses and fungi were negative. The pathological examination of pulmonary wedge resection performed from lingula revealed foreign-body type giant cell reaction and poorly- formed non-caseating granulomas distributed mainly along interlobular septa and subpleural zones (Figure 2). Asteroid bodies as well as a birefringent material were seen in the cytoplasms of giant-cell histiocytes under polarized microscope (Figure 3a, b). Histochemical stains did not reveal any microorganisms and lung tissue cultures were also negative for any mycobacteria species. Based on the clinical, radiological, and pathological findings, a diagnosis of sarcoid-like granulomatous reaction induced by adalimumab was confirmed. Given the lack of radiological response four months after cessation of adalimumab, methylprednisolone 32 mg/day peroral was initiated. The patient was controlled every month initially and every two months thereafter with a gradual reduction in methylprednisolone dosage. At the end of nine months of steroid therapy, a control CT of thorax revealed stable nodular opacities in both lungs. As psoriatic lesions gradually increased and worsened during this period, ustekinumab was started. 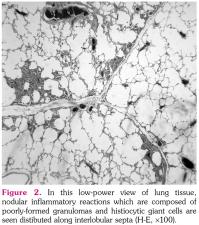 Figure 2. In this low-power view of lung tissue, nodular inflammatory reactions which are composed of poorly-formed granulomas and histiocytic giant cells are seen distibuted along interlobular septa (H-E, x100).
× 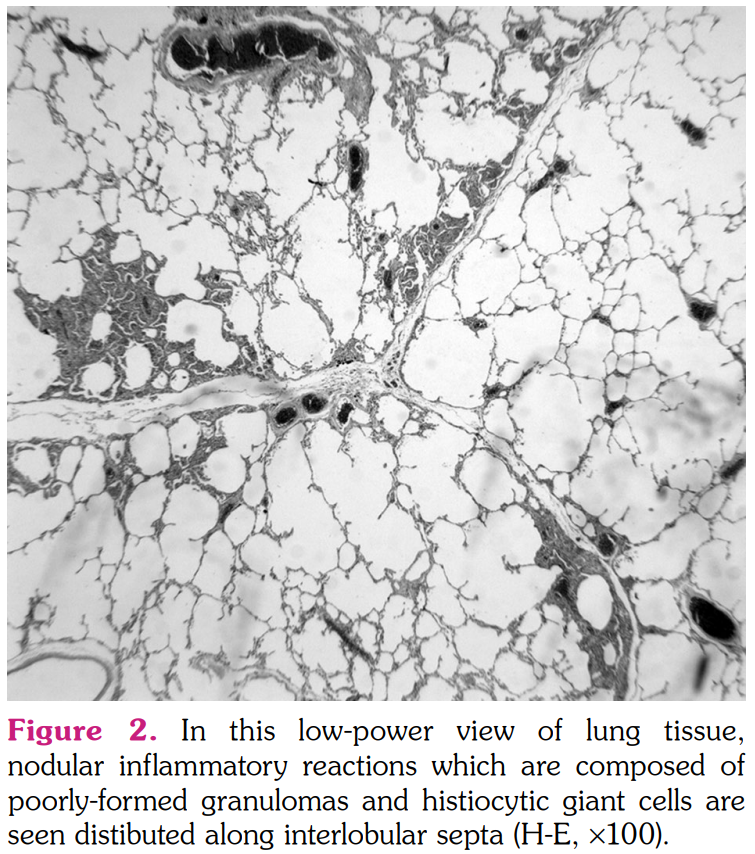 Figure 3. (a) High-power image of multinuclear histiocytic giant cells (H-E, x400), (b) some of which also have astrocytic bodies in their cytoplasms (H-E, x400).
× 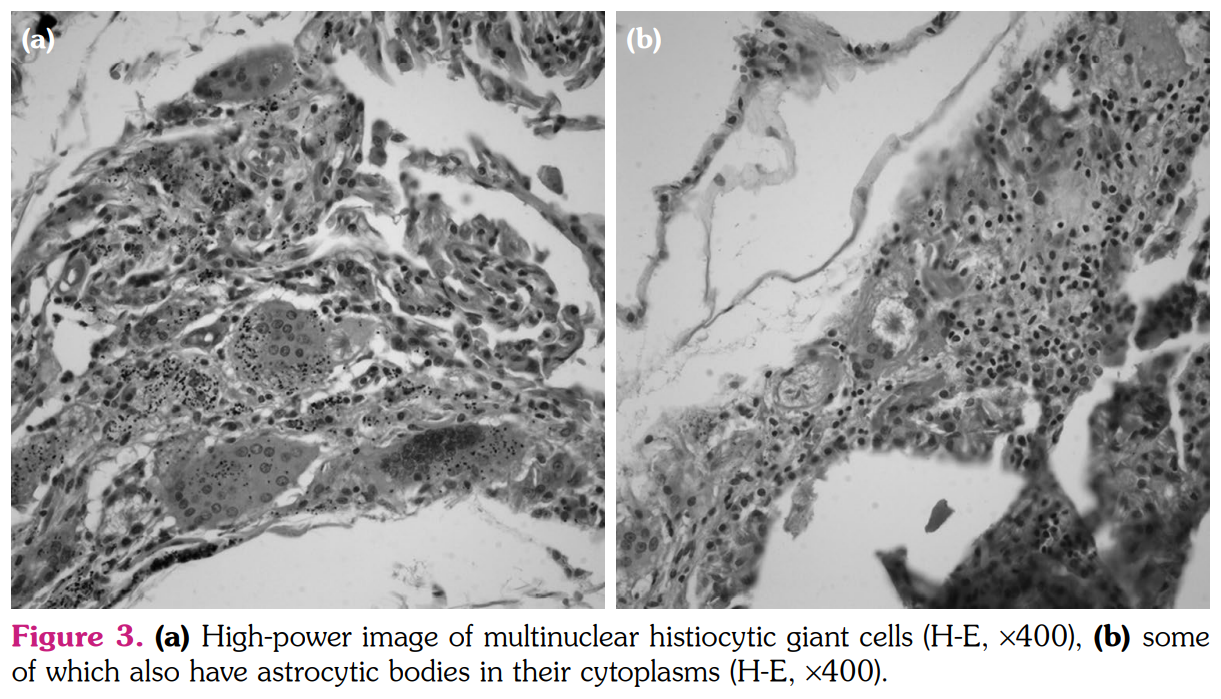 In conclusion, we present a case with widespread nodular opacities in the lungs mimicking a miliary pattern in a patient undergoing adalimumab for psoriasis. Interestingly, the patient was symptom-free during the occurrence of widespread sarcoid-like lesions as well as being refractory to oral corticosteroid therapy since it is unusual for sarcoidal lesions to be unresponsive to corticosteroids. Although miliary opacities in the lung in patients undergoing TNF-α inhibitor therapy primarily suggest tuberculosis, recently this paradoxical sarcoid-like complication of TNF-α inhibitor therapy has increasingly been recognized. Therefore, if a patient discloses such miliary opacities in the lung on TNF-α inhibitor therapy, sarcoidosis-like granulomatous reactions should not be forgotten after exclusion for tuberculosis was established.