Objectives: This study aims to determine the relationship between the severity of sarcoidosis and serum B-cell activating factor (BAFF) concentrations.

Patients and methods: This cross-sectional study was conducted between December 2015 and March 2018 on 55 patients with sarcoidosis (16 males, 39 females; mean age, 39.9; range 25 to 60 years) and 28 healthy subjects (7 males, 20 females; mean age, 39; range 25 to 60 years). The sarcoidosis patients were divided into active chronic sarcoidosis and acute sarcoidosis groups. The diagnosis of sarcoidosis was based on clinical, radiological, and pathologic findings. Also, the diagnosis of the active disease was based on the level of angiotensin-converting enzyme, active skin, eye, and lung lesions. Scadding score was also measured, and other patient information was collected by pre-designed questionnaires.

Conclusion: Serum BAFF concentration was higher in patients with sarcoidosis, while this was not significantly different from increasing severity of symptoms. There was no significant difference in BAFF levels between acute sarcoidosis and active chronic types.

Sarcoidosis is a multi-system granulomatous disease with an unknown cause.[1] Lungs are the most involved organs in the disease. Other organs that can be involved include eyes, skin, muscles, liver and joints.[2] Though T cells play a significant role in the development of sarcoidosis, researches have shown that the humoral immune response can contribute to the disease.[3,4] Aggregation of B cells and plasmatic hypergammaglobulinemia are seen in pulmonary lesions, while positive effects of monoclonal antibodies (anti-CD20) have been reported in patients.[4,5]

B cells are commonly known as a positive immune stimulant in inflammation. B cell- activating factors (BAFFs), which are a family of tumor necrosis factors, play a vital role in the growth and function of B cells, so that their inhibition dramatically reduces the number of B cells in the follicular and marginal regions.[6] Also, increasing the expression of BAFF in mice causes the development of reactive cells, as well as the production of autoimmune antibodies.[7]

The active form of the disease means that T cells and macrophages are still active, and granuloma tissues are associated with an ongoing illness. In contrast, the inactive form of the disease is when the disease does not find any progress.[8] Factors such as angiotensin-converting enzyme (ACE) and lysosomal that are produced by the epithelial and giant cells can be indicative of the activation and progression of the disease.[9] In this study, we aimed to determine the relationship between the severity of sarcoidosis and serum BAFF concentrations.

In this study, 5 mL of blood was collected from the brachial vein by a qualified nurse from patients and controls. At this point, the co-worker noted that the tourniquet should not be closed for long periods. The blood sample was prepared in a non-solid state and then centrifuged at 3,000 rpm for 10 min. It was stored at -80°C, then BAF levels were measured by enzyme-linked immunosorbent assay while serum immunoglobulin (Ig) G, IgM, and IgA were measured by nephelometric process. Also, samples’ calcium, C-reactive protein, erythrocyte sedimentation rate and ACE levels were measured. Other patient information such as age, sex and duration of the disease was obtained by pre- designed questionnaires.

An alpha error of 5% and a beta error of 20% were considered. A comparison of the mean and standard deviation of the control group and sarcoidosis groups was performed for BAFF, which was sufficient for 20 samples in each group. Considering that we had three groups for comparison in the present study, the sample size was multiplied by coefficient √2, which increased the sample size to 28 persons in each group. Statistical analysis was performed by the PASW version 18.0 software (SPSS Inc., Chicago, IL, USA). Chi-square and Fisher’s exact tests were used for nominal variables. For independent comparison, data independent of the T-test (parametric) were used. The significance level for statistical analyses was considered as 5%.

In this study, the majority of the patients were female (70.9%) and the duration of disease was more than two months in most of them. Among the symptoms of the disease, the most extra- pulmonary symptoms were erythema nodosum (n=46, 83.6%), arthritis (n=22, 40%) and anterior uveitis (n=13, 23.6%). Other patient related information is shown in Table 1. 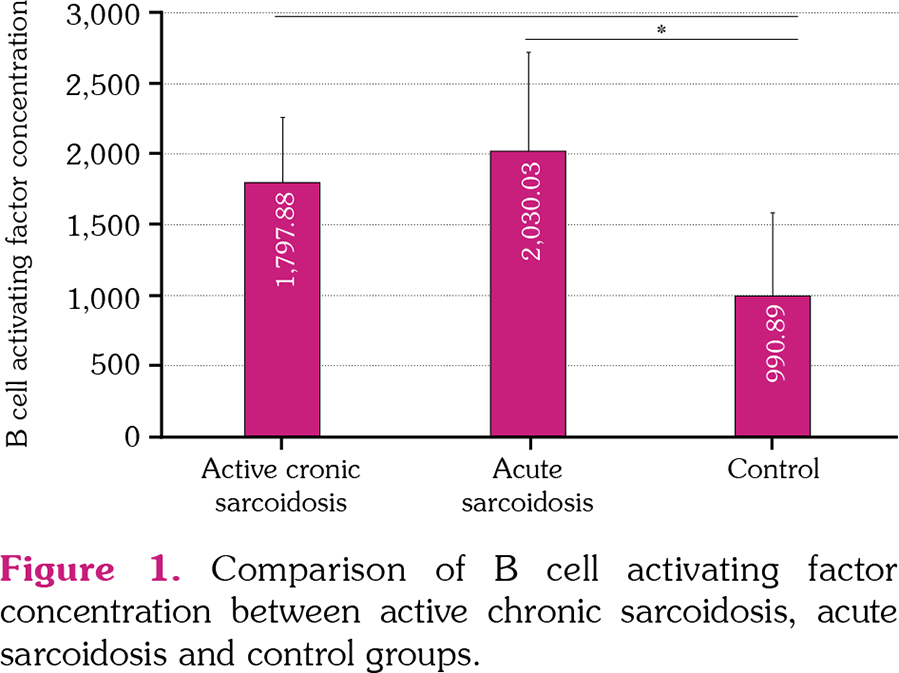 Table 2 shows the BAFF score in each of the various manifestations of the disease. BAFF concentration did not differ significantly in any of the ocular, skin, and other symptoms of the disease. Also, laboratory factors were compared between the two groups, among which the level of calcium in the group of active chronic sarcoidosis was significantly higher than that of acute sarcoidosis (9.6±0.6 vs. 9.1±0.3; p<0.001), Also, the forced vital capacity (FVC) was markedly lower in the group of active chronic sarcoidosis (90.4±15.7 vs. 98.2±4.0; p=0.021). Other factors were not significantly different between the two groups (Table 3).

Table 4. Comparison of correlation between B cell activating factor levels in serum and laboratory markers, including serum markers of disease activity and pulmonary function tests in active chronic sarcoidosis and acute sarcoidosis
× 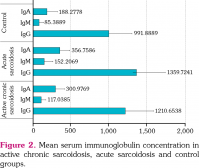 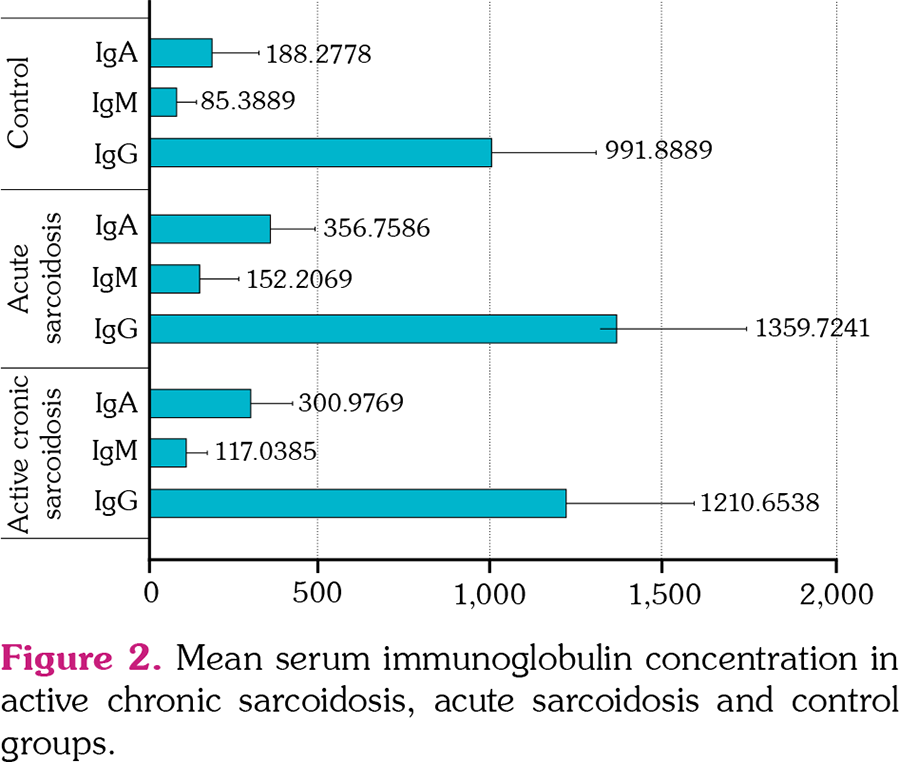 Many studies point out the role of B cells in the pathogenesis of sarcoidosis.[11,12] BAFF is an essential factor in regulating the humoral immune system, the maturation of B cells, as well as in dividing the B cells and preventing their apoptosis.[12,13] This factor leads to the differentiation of B cells into Ig-producing plasma cells.[14] Previous studies have shown that serum BAFF levels are associated with the activity of sarcoidosis.[2] Our study also had similar results, and serum BAFF levels were significantly higher in the patients than controls. Studies show that in some autoimmune diseases such as lupus erythematosus and rheumatoid arthritis, BAFF level is higher than a healthy population.[15] In a clinical trial study at phase 3, belimumab, an inhibitor of BAFF, could reduce symptoms in patients with lupus.[16] Therefore, it seems that the use of this drug for patients with sarcoidosis can also be effective and safe. In this study, we attempted to demonstrate if BAFF concentrations could indicate the severity of the disease in addition to the activity of sarcoidosis.

In a study by Ando et al.,[2] the increased ACE and lysosomal levels, as two predictors of the severity of the disease, had a positive correlation with BAFF. In another study by Saussine et al.,[12] there was a significant relationship between BAFF serum levels and severity of illness as well as hypergammaglobulinemia. They found that there was no significant correlation between the subtypes of B cells and the disease in inactive type unlike acute and chronic types. In our study, there was no significant correlation between the ACE and BAFF values.

The severity of sarcoidosis is usually based on criteria which include radiographic findings, pulmonary function tests and evaluation of extra- pulmonary involvement.[17] Laboratory findings that have been presented in previous studies to evaluate the severity of the disease include ACE, soluble interleukin-2 receptor, C-X-C motif chemokine ligands 9 and 10.[18-21] In another survey of BAFF, there was a significant relationship between this factor and the degree of progression of the disease in radiographic images and the extent of the involvement of other organs of communication.[2] The difference in our study from previous studies was that to our knowledge for the first time, a comparison was performed between patients with acute sarcoidosis or Lofgren syndrome and patients with active chronic sarcoidosis, which revealed no significant difference in serum BAFF concentrations between the two groups.

This study has some limitations. Due to small sample size, affecting outcome by uncontrolled intervention variables, and the retrospective nature of study, we cannot generalize our findings. Therefore, it is suggested that future researchers carry out further studies with large sample size to check the results obtained from our study.

In conclusion, serum BAFF concentrations were higher in patients with sarcoidosis in comparison to a healthy population, while there was no significant relationship between severity and duration of disease and serum levels of BAFF. We also found no significant difference in BAFF levels between acute and active chronic types of sarcoidosis. Due to the high serum BAFF levels in patients with sarcoidosis and its role in the pathogenesis of the disease, in addition to diagnosis, it can be suggested that BAFF inhibitor compounds can be used as treatments in sarcoidosis while further studies are needed in this regard. However, this study has attempted to question the use of serum BAFF to predict the severity of disease.